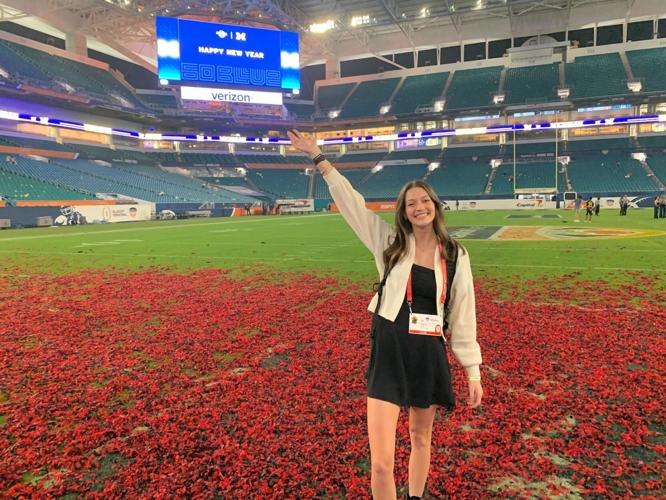 Katherine Lewis, Red & Black assistant sports editor, was one of the team of students that covered the postseason games that led to Georgia's historic national title victory. She and other reporters traveled to the Orange Bowl by car after massive flight cancellations. (Photo courtesy Katherine Lewis) 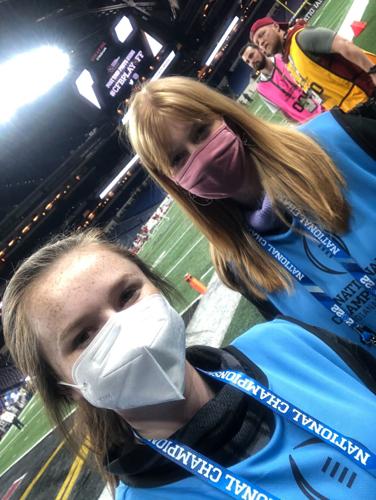 Covering a high-profile championship game is a challenge in itself, but for Red & Black reporters heading to the Orange Bowl, complications arose well before they reached Miami. At the last minute, their flight was cancelled thanks to bad weather and the surge in the omicron variant.

“I was literally at Target getting flight-friendly shampoo and conditioner the second I got the text. I knew at that moment that our adventure got a little more interesting,” said Kathryn Skeean, photo editor.

“We all met in Athens to make the trip by car,” said Katherine Lewis, assistant sports editor. A full day of driving later, Skeean, Lewis and sports editor Drew Hubbard arrived in Miami to cover the game.

“That trip with Katherine Lewis and Drew Hubbard is one I will cherish forever, though,” Skeean said. “It’s hard not to bond with people you’re trapped in a car with for 12-plus hour drives.”

The buzz around the game can cause an onset of nerves for student reporters, Hubbard said. “The challenge of covering big games like this is making sure you don’t make the moment too big, because that will freak you out and then you won’t be in the right mindset to write your stories. If I allow stress and imposter syndrome to get the best of me, then I won’t be able to produce my best work for these big games.”

Amid the national spotlight on titan football teams going head to head, student reporters must act professionally, skillfully generate stories and photographs and get into “game mode,” said Skeean.

As the clock ticked down in the fourth quarter, the Bulldogs led with a score of 34-11 against the Wolverines.

“In my opinion, the most memorable moment was when I realized that Georgia was going to win and that I would be covering a team that had a shot at a national title,” Lewis said.

While photographing action on the field was exciting for Skeean, one of her highlights came during the post-game celebration, when players were tossing out oranges from the namesake trophy, and one player picked up an orange to take a bite.

“Watching Jordan Davis make a normal sized orange look like a Cutie, though, is not a blur,” said Skeean. “I saw him pick it up and I vividly remember thinking, ‘Oh my God, I can’t miss this moment, this is gold.’ It has since become one of my more iconic photos, and I still crack up every time I see it.”

Skeaan’s photo of Jordan Davis snacking on an orange was the image on the front page of the digital Red & Black special edition produced a few days later, while a shot of quarterback Stetson Bennett ran on the print edition A1.

When it came to the national title game between Georgia and Alabama, air travel once again became a problem. Tickets were limited, prices exorbitant and the threat of cancellations high. So the team once again opted for a road trip, with Skeean and Hubbard joined by assistant photo editor Jessica Gratigny and assistant sports editor Jake Jennings.

“Just like the Orange Bowl, the National Championship game was such a blur. The first half was a battle photographically purely because of the lack of offensive action,” Skeean said. “As great as Jack Podlesny and Will Reichard are at kicking the ball through the uprights, that does not exactly make for the greatest photo gallery in the world. As we all know, the second half was a different story.”

After a battle of field goals, the action picked up in the second half of the game. “The most memorable moment from this whole postseason run was probably Kelee Ringo’s interception in the National Championship to seal the win,” Hubbard said. “Alabama still had a shot to win the game, it wasn’t a great shot but it was still possible. Georgia fans know that it's not over until it's over, and for sports writers, that's true as well.”

"Every time before kickoff, once everything is worked out and you’re there just to focus on writing, there is this cool moment where you can just sit there and realize where you are and take it all in, whether it is the SEC Championship, Orange Bowl or the National Championship.”

For Jennings, a highlight was the post-game player interviews. “They were so pumped up and gave really good quotes.”

As the Red & Black team made the long drive back to Athens the day after the game, a small team was at work in the newsroom on Baxter Street putting together the special edition on the national title win. The reporters made a stop on the way to get a strong enough Wi-Fi connection to upload photos and download PDFs of page proofs to review. “Working on the paper out of a Starbucks on the way home was pretty crazy, but was a cool experience,” Jennings said.

After the trip back to Athens, Skeean was enjoying some well earned rest when she got a text: Would you like to join newsroom adviser Charlotte Norsworthy in a trip to the printing plant to watch the extra edition come off the press?

PHOTOS: Behind the scenes at the printers for the National Championship edition

“I went to the printers with Charlotte. We watched the papers come off the machine and I saw the photo I had taken on the front. It was surreal,” Skeean said. “We both got emotional. I thought the emotions would end there, but boy, was I wrong. Seeing people lined up all the way down Baxter Street to pick up the paper the next day was the craziest feeling ever, and I could not be more grateful.”

Hubbard said a lot of work goes into preparing to cover a big football game, and it can be tiring. But, he added: ”Every time before kickoff, once everything is worked out and you’re there just to focus on writing, there is this cool moment where you can just sit there and realize where you are and take it all in, whether it was the SEC Championship, Orange Bowl or the National Championship.”

One for the history books

The work of the sports and photo team is not ending with the special edition. They are working with the Red & Black special publications team on a 100-page book to be released in February. “Delivered,” will capture the championship run, title game and recap the season, showcasing a semester of reporting and photography.

“The Red & Black has given me so much and I’ll always be grateful for my time at this paper. Not just the postseason run, but every sport I’ve gotten to cover,” Hubbard says. “Covering equestrian, softball, soccer and baseball were some of the best times, too. Now, looking back at my whole time at the paper, being able to cover one of the most historic wins in Georgia sports history is something I’ll always cherish and The Red & Black gave me that experience. I learned so much about journalism, life and leadership, and I will always be thankful for my time here.”

Georgia’s wide receiver and return specialist Kearis Jackson announced Tuesday on Twitter that he will be returning for his senior season, foregoing the NFL Draft.

Eva Pound is the Alumni Communications Assistant and a former news desk contributor. Pound, a junior journalism and international affairs double major, hopes to write about foreign affairs after graduation.

Subscribe to the Friends of The Red & Black email newsletter

Do you have any ideas for our reporters or editors? Do you want to give new news about your organization or business? Tell us!
© Copyright 2023 RedAndBlack.com, 540 Baxter St Athens, GA | Terms of Use | Privacy Policy
Powered by BLOX Content Management System from BLOX Digital.