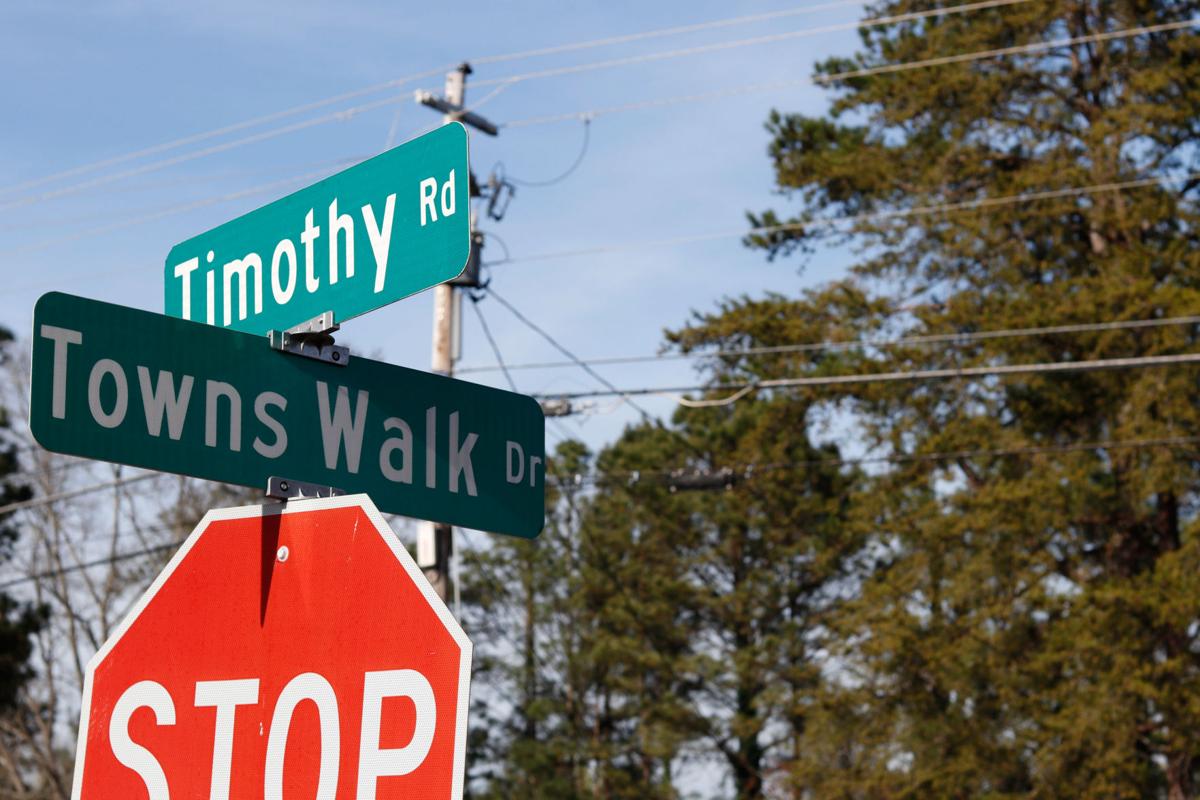 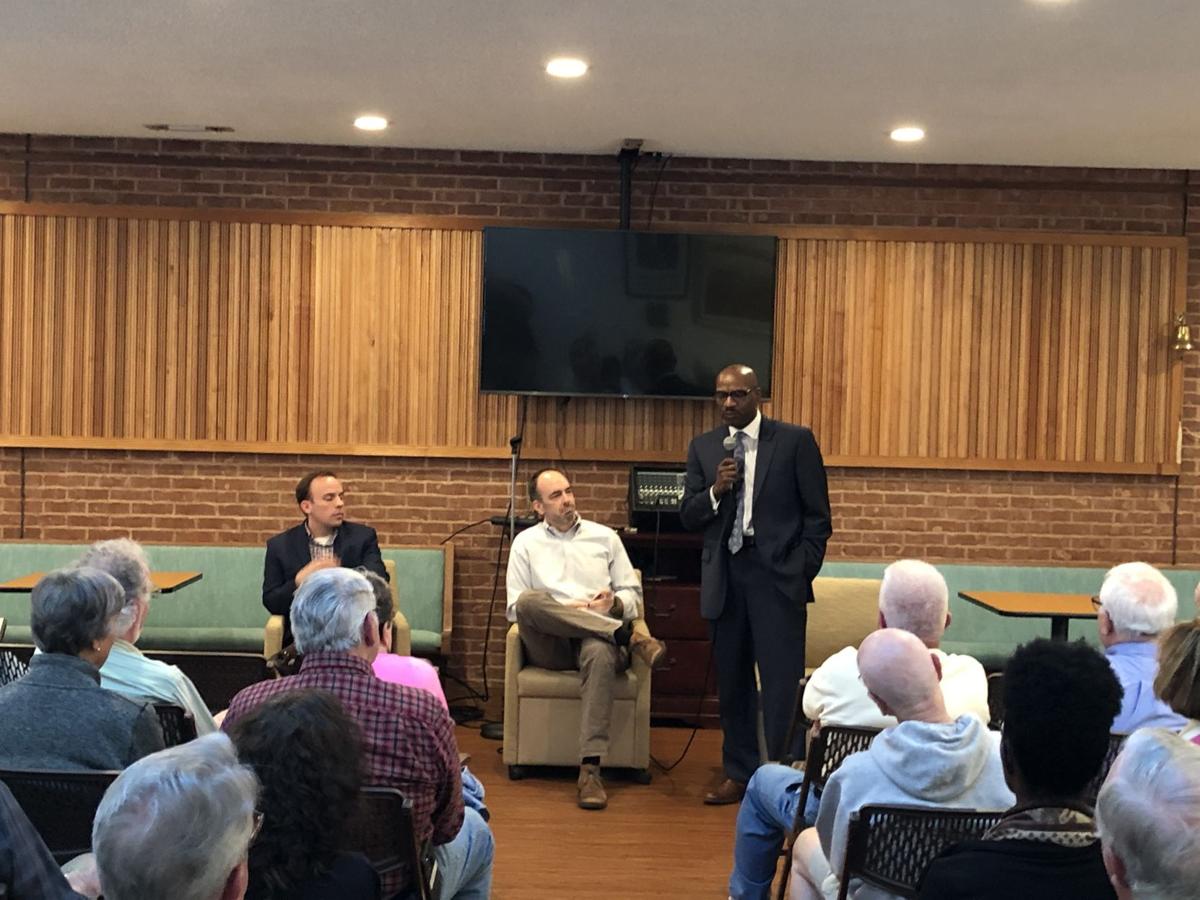 ACC Police Chief Cleveland Spruill was one of three city officials who fielded concerns and questions from residents of the Timothy Road area on April 3. (Photo/Tyler Wilkins)

After a Timothy Road-area resident suggested beefing up enforcement of speeding on the road, Athens-Clarke County Police Chief Cleveland Spruill joked with the residents to be careful what they wish for, as they’ll be held accountable for speeding, too.

Drew Raessler, department director of ACC Transportation and Public Works, and Mike Hamby, ACC District 10 commissioner, joined Spruill to listen to approximately 60 residents who live in neighborhoods off Timothy Road. The residents suggested changes to the road for the local government to implement.

Timothy Road, once solely a residential area, now connects to U.S. Route 441, Epps Bridge Parkway and Atlanta Highway, leading to an influx of people who use the road to commute all across ACC and to Oconee County.

With an increase in traffic from commuters, residents complained of noise levels in the surrounding communities. One resident said he cannot hold a conversation on his front porch during rush hour because of the high level of noise from the road.

Currently set at 45 mph, several residents voiced their concerns about the speed limit on Timothy Road. Raessler said when determining speed limit, researchers look at the 85th percentile of speeds observed on a road, meaning the speed at which 85% of drivers travel at or lower.

The sidewalk on Timothy Road only runs mostly on one side, though it is nonexistent for some stretches, and several residents suggested the construction of an additional sidewalk on the opposite side.

With the combination of a 45 mph speed limit and only one sidewalk lining the road, residents of the area said they avoid walking along the road because they feel endangered doing so. The ACC Department of Transportation and Public Works recently implemented red-brick crosswalks with flashing crosswalk signs, but one resident said while she appreciates the additions, she still feels unsafe crossing the road. Even after pushing the button to signal to oncoming traffic she wishes to cross, cars drive past without stopping.

With its extensive length and multiple traffic-prone areas it meanders through, travelers on Timothy Road use a variety of transportation methods. Several residents said bicyclists face risks from vehicles while on the road. One resident suggested constructing a separate bike lane, saying it would alleviate traffic slowdown and protect bikers from accidents.

The three public officials said they’re seeking long-term solutions to the issues raised, and Spruill said increasing the enforcement of speeding will not permanently fix the problem in the community.

Clarification: A previous version of this article did not address the sections of Timothy Road where sidewalks do not exist. The article has since been clarified.

An accepted settlement for a former ACC police officer who hit a suspect with his car highlighted the Mayor and Commission meeting on Tuesday night. The Commission also voted on a public arts project for downtown and zoning changes regarding halfway houses.

A few months into his first term as mayor, Mayor Kelly Girtz sat down with The Red & Black to discuss his transition to mayor and future plans, as well as the horse painting in his office.

Catch up with News and Brews, our news podcast where we talk about the weeks biggest Athens and University of Georgia news.

The Athens-Clarke County SPLOST 2020 Citizens Advisory Committee has recommended a $44.5 million SPLOST project to the mayor and commission for the construction of affordable rental housing. However, this mixed-income development could exclude low-income people, which may not fix the current housing crisis many Athenians face today.

Road construction to cause detours on Baxter, Hull and Lumpkin streets over summer

Athens-Clarke County Public Utilities will replace sewer line on the three streets, and commuters should expect delays and detours during the summer.

...and there is only one red-brick crosswalk with flashing crosswalk sign, its at the Elementary School. The other do no not have anything but lines and a sign...and no one ever stops for them. Their current design is more dangerous that just removing them all together.

The article's author wrote that "The sidewalk on Timothy Road only runs on one side, and several residents suggested the construction of an additional sidewalk on the opposite side." To be more accurate, about 1.5 miles of Timothy Road east of Epps Bridge Parkway has NO sidewalks on either side. Residents present at the meeting asked for a sidewalk on at least one side of Timothy Road. Audio of the meeting can be heard at: https://drive.google.com/open?id=1ja0ot6XEloUaxcEzh8FBzsSK31LzX3ys