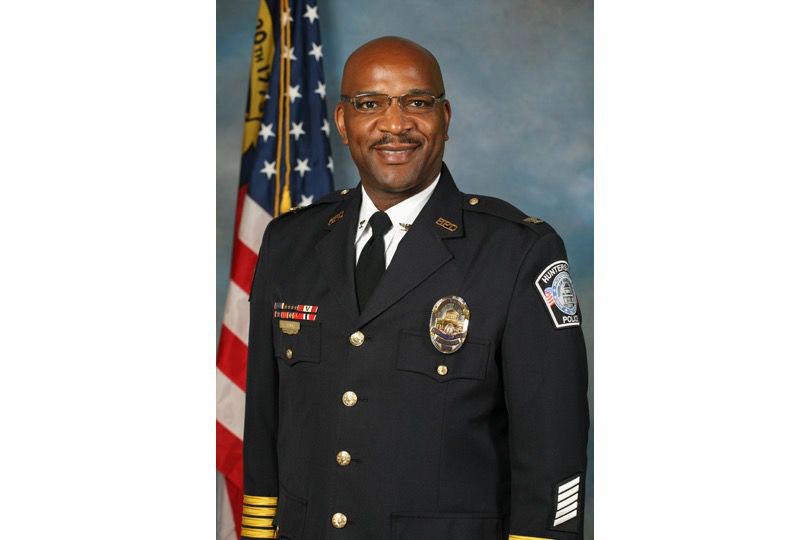 Cleveland Lee Spruill Sr. will start as the next Athens-Clarke County police chief on Feb. 4. 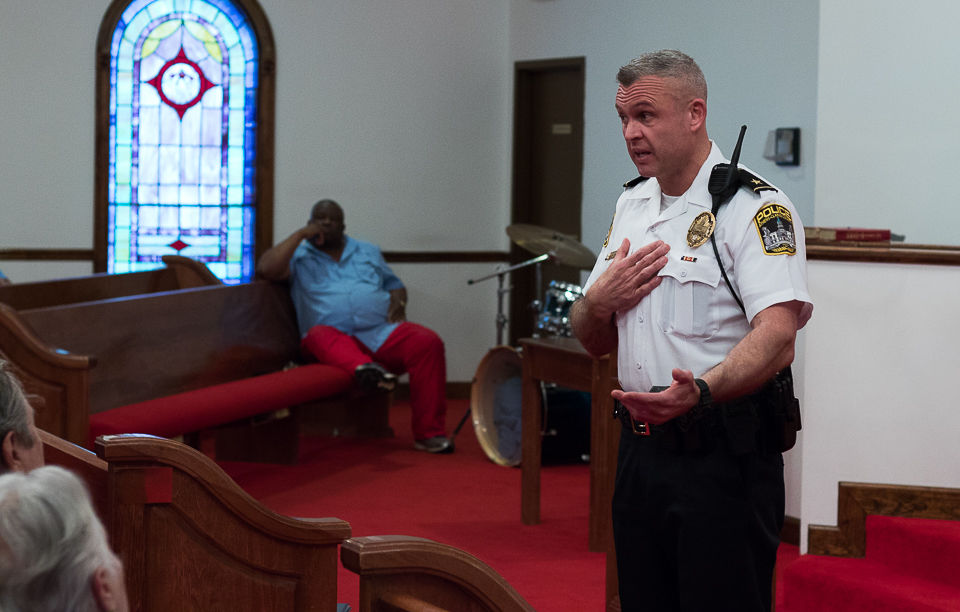 R. Scott Freeman, the former Athens-Clarke County Chief of Police, speaks at a NAACP event about community relations and the rise of hate groups at the East Friendship Baptist Church, in Athens, Georgia, on Thursday, September 7, 2017. (Photo/Jane Snyder, www.janemarysnyder.com) 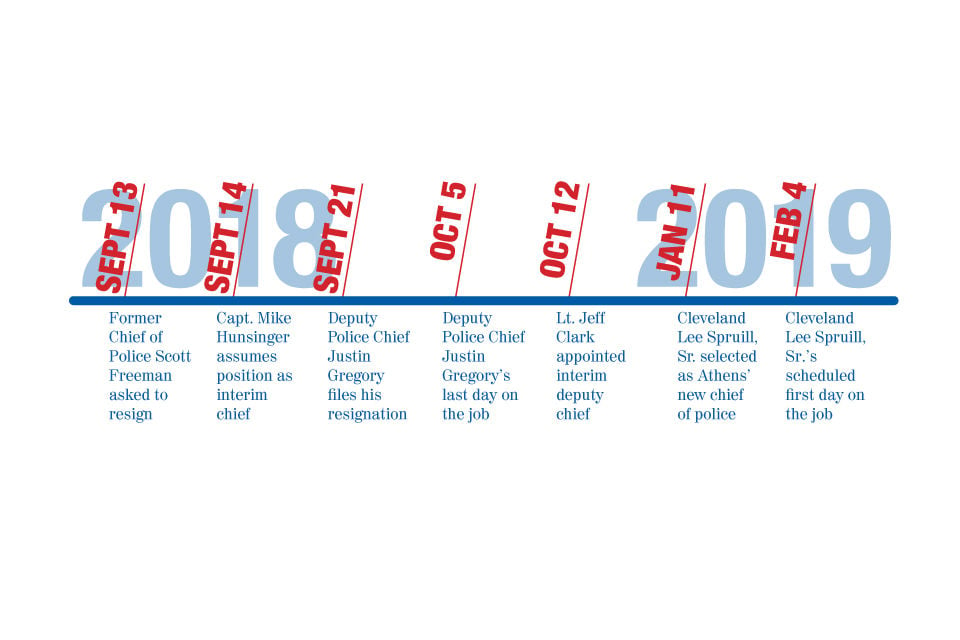 The Athens-Clarke County Police Department made headlines last year, capturing state-wide attention for a series of controversial events. A local officer fired for excessive force and later exonerated, a 10-year-old boy restrained to the ground by another officer and the dismissal of the city’s police chief — all within a span of four months — left the community in a state of uncertainty.

Right on schedule, Cleveland Lee Spruill, Sr., former chief of police from Huntersville, North Carolina, was selected and will start his duties on Feb. 4.

“I think I have all the qualifications, and I see Athens-Clarke County as an opportunity for me to use some of the tools that I have to improve the police-community relationship, to reduce crime and to build trust between us,” Spruill said.

“I am a different chief than the previous chief. What happened between the last chief and the rank and file is in the past, that’s in the rearview mirror.”

As an avid football fan with family in Atlanta, Spruill is excited to begin his position in ACC. He believes Athens is an “up-and-coming community” with opportunities for economic growth, a “high functioning” police department and a strong understanding of the importance of a police-community relationship.

Coming from Huntersville, North Carolina, — and Alexandria, Virginia, before that — Spruill feels prepared for the transition.

He will be relying on existing officers and department personnel to provide “historical knowledge” of the community. He said the first three to six months will involve lots of listening, both to his staff and community members.

His internal access to the scope of this “historical knowledge” is more narrow now due to the high turnover of ACCPD officers in the last six months.

According to ACCPD documents from an October investigation, 44 individuals left the force in 2018. Of those, 15 left in August and September alone.

According to exit interviews from some of the officers who resigned in 2018, staffing problems, promotional issues, benefits, pay and lack of support from the county and the community were all issues that contributed to their decision to leave the department.

But low morale wasn’t isolated to the police department.

“There are deeply-rooted problems that existed before Freeman and will continue to exist after if we don’t find a way to collaborate and find mutual grounds of understanding,” Johnson said at the October meeting.

Similar to the worries voiced at the town hall meeting, Spruill recognizes that in Athens, and across the nation, there exists a “sense of anxiety” regarding law enforcement, especially coming from communities of color that experience disproportionate levels of police violence.

In light of this, one of Spruill’s core goals is to improve and maintain effective communication and partnerships with the community to build trust.

Looking forward to February, Spruill has chose to look past the events that set the stage for his employment in Athens.

“While I’m aware of what went on in the past, I can’t spend a whole lot of time worrying about that. I’ve got to spend my time and focus on the future and what’s in front of me,” Spruill said.

If the shoe fits

In order to select a new chief of police, Williams said ACCPD contracted assistance from the International Association of Chiefs of Police, a nonprofit organization for the advancement of law enforcement professionals. Final candidates for the job went through experience training, and Williams said Spruill received the highest scores.

Williams also released a public survey asking community members to provide input on the new chief’s selection. He received around 150 responses, a small number compared to the ACC population estimate of 125,691.

"While I’m aware of what went on in the past ... I’ve got to spend my time and focus on the future and what’s in front of me."

After narrowing it down to four finalists, Williams picked Spruill as the best fit because he believes Spruill’s diversity of experiences will help him connect with all members of the Athens community, no matter their age or political stance. Williams said “one thing that ran true” was Spruill’s obvious “personal connection” with the officers from the Huntersville Police Department.

“That’s the type of thing I think we need right now in the police department,” Williams said.

The ACCPD has a Community Outreach Division whose members organize events focused on improving the relationship and communication between law enforcement agents and community members. However, a triad of local groups –– Athens Anti-Discrimination Movement, Athens for Everyone and Athens Immigrant Rights Coalition –– released a petition after Freeman’s departure asking for more specific, tough policies to tackle what they see as unjust over-policing and lack of transparency.

Johnson and her organization have been a vital force behind community conversations surrounding local law enforcement.

With the selection of the new police chief, Johnson said AADM will continue to try and foster communication with ACCPD as well as encourage as much community engagement as possible.

“Anyone that comes to Athens taking on a leadership role has to be willing to engage with these people that are on ground level, not just on a government level or on a corporate level, that are trying to make a difference in this community,” Johnson said.

Also included in the petition is the creation of a Citizens’ Police Accountability Board, an entity of community members focused on monitoring and making decisions regarding police department operations. A4E board member Briana Bivens said the groups will continue to ask for this.

Bivens hopes Spruill considers the “ills of the past” in his decision and policy making in order to properly “confront our history as a community,” specifically regarding policing in disenfranchised communities.

Johnson thinks a new direction for ACCPD officers is necessary to move forward and create coexistence between police and the community.

However, she hopes Spruill is “someone that is not afraid to do some of the things that Chief Freeman did,” like attending local forums and meetings as well as helping host the first Athens in Harmony, a concert aimed to “break racial barriers,” Freeman said at the 2016 event. He continued to attend through 2018.

Spruill wants to make sure ACCPD officers are “skilled enough” to navigate difficult situations, specifically those involving racial tensions. He plans to bring a new attitude to the police department.

“I am a different chief than the previous chief. What happened between the last chief and the rank and file is in the past, that’s in the rearview mirror,” Spruill said. “What I can tell my officers and my civilian employees is that I will be committed to looking out for them, making sure they have their training tools and resources to do an effective job.”

$1,200 worth of items stolen from residence

Cleveland Lee Spruill Sr. will begin his duties as chief of police on Feb. 4.

Numbers behind the turnover: A closer look at the ACCPD retention rates

For the first time in the University of Georgia’s history, Anita Qualls has been awarded the prestigious Churchill Scholarship. The scholarship, established by Winston Churchill, provides American students with the opportunity to travel across the pond to pursue a one-year masters degree at the University of Cambridge.

Michelle Nguyen has served as interim director since Sept. 1.

Construction for the cosmetology lab began in August 2018 and was completed in December 2018.

The fight night, hosted by Keppner Boxing, was the first of the year.

A police officer was struck by a car, an elderly woman was harassed and two Xbox consoles were stolen in this week's Athens crime blotter.

Due to health issues, Vernon Payne has not attended a board meeting since March 2018, and the board announced Jan. 10 that Payne had officially submitted his letter of resignation.

A4E board meeting touches on prison labor in ACC, asylum seekers at border and more

Asylum processes at the U.S.-Mexico border in Tijuana, unpaid labor for those incarcerated and a documentary regarding the human remains found at the University of Georgia’s Baldwin Hall in 2015 were among the topics the Athens for Everyone board of directors discussed on Monday night.

Reform in policing has gained major attention, and some groups have turned to the court system to fight injustice.

The AADM’S new three-part Books & Bailout initiative supports the creation of a bailout assistance fund to raise money for posting bail for non-violent juvenile and adult inmates. The initiative also involves the collection and donation of paperback books to the Athens Clarke-County Jail.

At a town hall held by Athens-Anti Discrimination Movement, Chief of Police Cleveland Spruill said his vision of the Athens-Clarke County Police Department is a “modern, enlightened, 21st century police department.” This vision includes a diverse organization, a building of trust and highly trained and well-equipped officers.

From the new chief of police making a public appearance to the announcement of the spring commencement speakers, get caught up on the top Athens and UGA news stories of the week.

As a former UGA alumnus loves the University and the Athens-area, I wish the Chief well. I have several police officer friends that formerly worked for ACC PD. Their stories of what they experienced tell me that the police department has been dysfunctional for a very long time. I hope the new Chief can right the ship and make the community happy at the same time. The overwhelming majority of police officers just want to go out in their community and make a positive difference. They need to feel like they are supported in that effort by the Chief and their community or they become demoralized. I think that's where the last Chief failed. He didn't offer his officers the support that they needed.