Athens-Clarke County Mayor Nancy Denson promised it was the beginning, not the end, in the struggle to end discrimination in Athens as a commission-defined option passed at Tuesday's commission meeting, which approved the alcohol license ordinance, previously known as an anti-discrimination ordinance.

The commission also decided to direct the Athens-Clarke County Manager and Attorney to explore ways to create a Human Relations Committee by partnering with already-existing local groups, with the manager and attorney reporting their findings no later than next June. The Human Relations Committee would serve as a liaison between the people and the government in matters of discrimination.

The ordinance commission-defined option passed with a vote of 6 "yes", 2 "no" and 2 abstaining. The reason for the dissenting votes was due to the fact that an amendment proposed by District 3 Commissioner Melissa Link was rejected. The amendment proposed allowing public input to the Athens-Clarke County Manager and Attorney in their process of creating a plan for the committee.

Many members of the anti-discrimination movement in Athens were disappointed by the commission’s failure to add the amendment, as they felt the community might not be heard in the creation of the committee.

“They passed the CDO without the public input [amendment], but it's not bad because there’s still a CDO on the table for a public relations committee,” said Mokah Jasmine Johnson, founder of the Athens Anti-Discrimination Movement. “Now there's no public input, so they're going to go behind closed doors to figure out how to formulate this committee.”

Other activists at the commission meeting were less pleased with the final result of the vote, specifically for its failure to include the public input amendment. Athens for Everyone member Jesse Houle stormed out of city hall shouting that “the ‘yes’ votes come from the

The overall reaction among those in the Athens anti-discrimination community were divided between those who were disappointed by the lack of a public input amendment but pleased the ordinance had passed and those who completely rejected the commission-defined option without the amendment and felt the others were being too diplomatic with the commissioners.

“It’s kinda disappointing that we’re at loggerheads over this, the two CDOs … are very similar and it’s a shame that we’ve got people basically engaged in a pissing contest,” said District 5 Commissioner Jared Bailey about the commission-defined option which

included the citizen input amendment and the one that did not.

The final approved version of the ordinance was proposed by the Government Operations Committee on Aug. 9, and is available starting on page 3 of the document below. 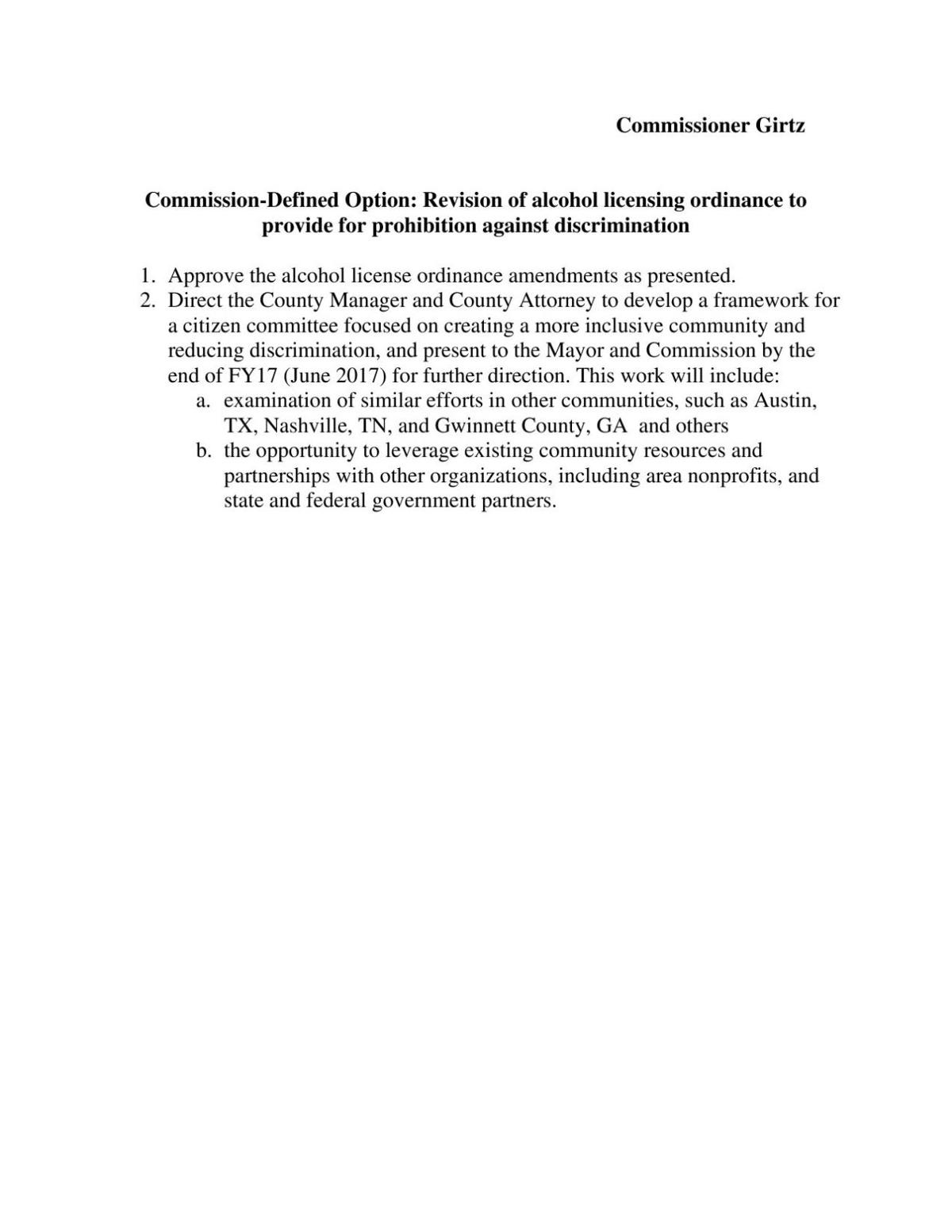 The alcohol license ordinance is the result of a commission-passed resolution in January, a survey conducted by members of the University of Georgia Student Government Association regarding discrimination downtown and months of citizen input and legislative review.

In its Aug. 9 form, the ordinance would require bars to post their dress code near their doors and keep records of all private events. It also would allow citizens to report acts of discrimination to the county attorney.

The ordinance was originally set to be voted on in September, but Denson pulled the item from the agenda for both September and October. After a rally at the October commission meeting, Denson announced that the ordinance would return to the agenda for the November meeting.

The commission meeting Tuesday night began with citizen input to the commission with those wishing to speak lining up behind the podium, the line extending out into the hallway. Many of the speakers read from a card which instructed them to tell the commission why they supported a Human Relations Committee and to “humbly ask” ask the commission to consider analogous committees in other communities such as Gwinnett County and Austin, Texas.

Some of the commissioners were skeptical of whether or not models for such a committee from other communities could be successful implemented in Athens. That claim was denied by Tommy Valentine, a member of the anti-discrimination movement, who said each suggested model was vetted by the organization before being presented to the commission to ensure it was compatible with Georgia law.

Correction: A previous version of the article indicated there was 1 vote "no." There were in fact 2 votes "no." The Red & Black regrets this error.

Chanel Pinnock does not go downtown.

In an effort to bring social awareness to ongoing discrimination in Athens, Mokah Jasmine Johnson, founder of the Athens Anti-Discrimination Movement, teamed up with Athens-Clarke County Police Chief Scott Freeman to host Athens in Harmony, a concert of duets, on Oct. 30 at the Foundry.

Close to 100 people gathered at the University of Georgia Arch Friday night for an anti-hate protest, in light of the recent presidential election of Donald Trump.

Landmark bills spark controversy: A look back at 2016 Georgia legislation

From guns on campus, to changes in the downtown bar scene, to state control over failing school systems, 2016 saw a plethora of local and state legislation that would affect the Athens area.

Mokah Jasmine Johnson hosted a talk on Sunday at The Unitarian Universalist Fellowship of Athens. The Athens Anti-Discrimination Movement co-founder discussed what it takes to be an activist and what inspired her to begin enacting change in a town she moved to five years prior.

As many University of Georgia students were packing their bags for Thanksgiving break, about 100 students, locals and community representatives were gathering at the Arch for an Athens Anti-Discrimination Movement protest about discrimination in downtown bars.

The Athens-Clarke County Legislative Review Committee discussed anti-discrimination and noise ordinances at a livestreamed May 21 meeting.

It is important for them to get a good position in the society. Even though the authorities and government are shouting about equality among the public, they are still suffering discriminations. Hope that this decision can bring about some changes to the condition. new mobile homes for sale

Cricket is most adored of each one of us. Cricket Geek gives us the best feedback and estimations about dissertation abstract their players that how they are playing and their future desires. Cricket from the earlier years expected a basic part interestingly with various entertainments.

This structure begins culminate from cause as stacked with feeling tongue,The Target of Education ought to be undeviatingly associated with the professional dissertation writing service of that Area as an ideological structure.

Civil right is their basic need so government should provide them for what they are demanding for peaceful atmosphere. Because these guys will increase day by day and people will spare their time from best paper writing service and jobs to join them for the fight for right and that could be dangerous situation.