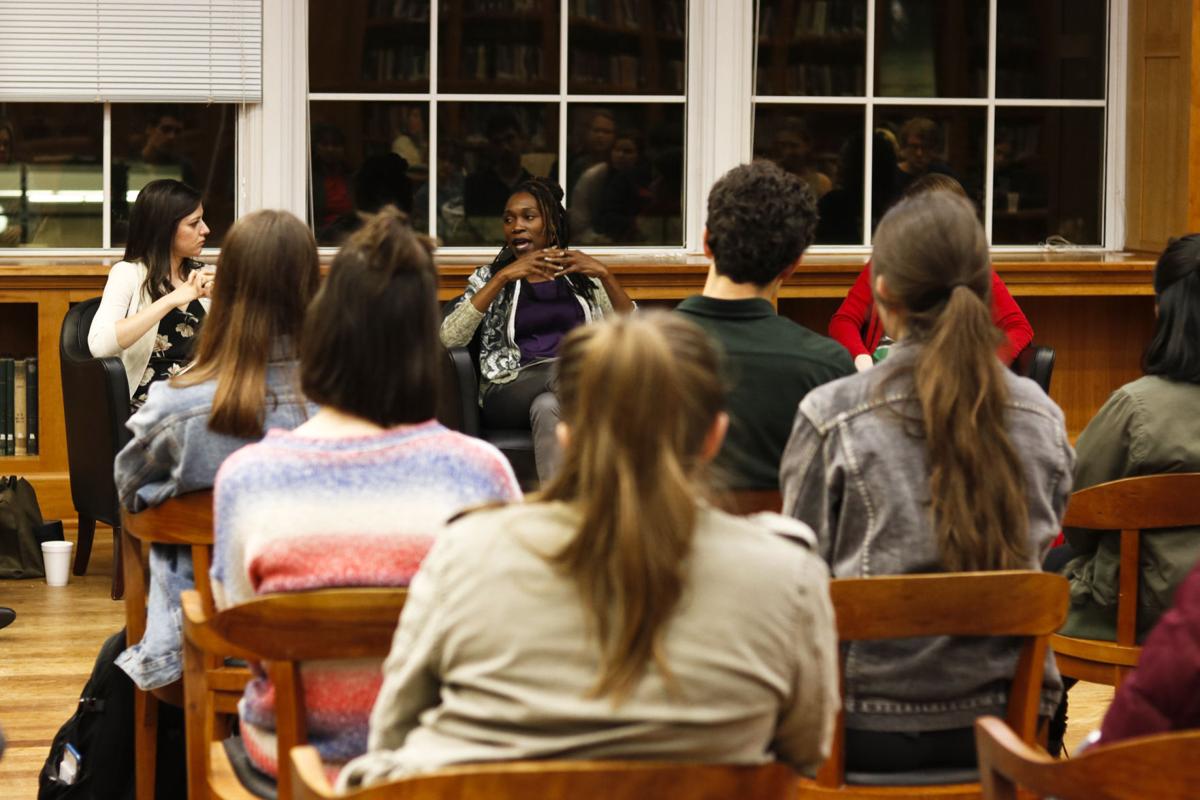 Students and Athens residents listen to panelists on Thursday, Feb. 13, 2020 in Athens, Georgia. Roosevelt @ UGA presented a panel discussion about the gender-based violence faced by women of color. (Photo/Taylor Gerlach) 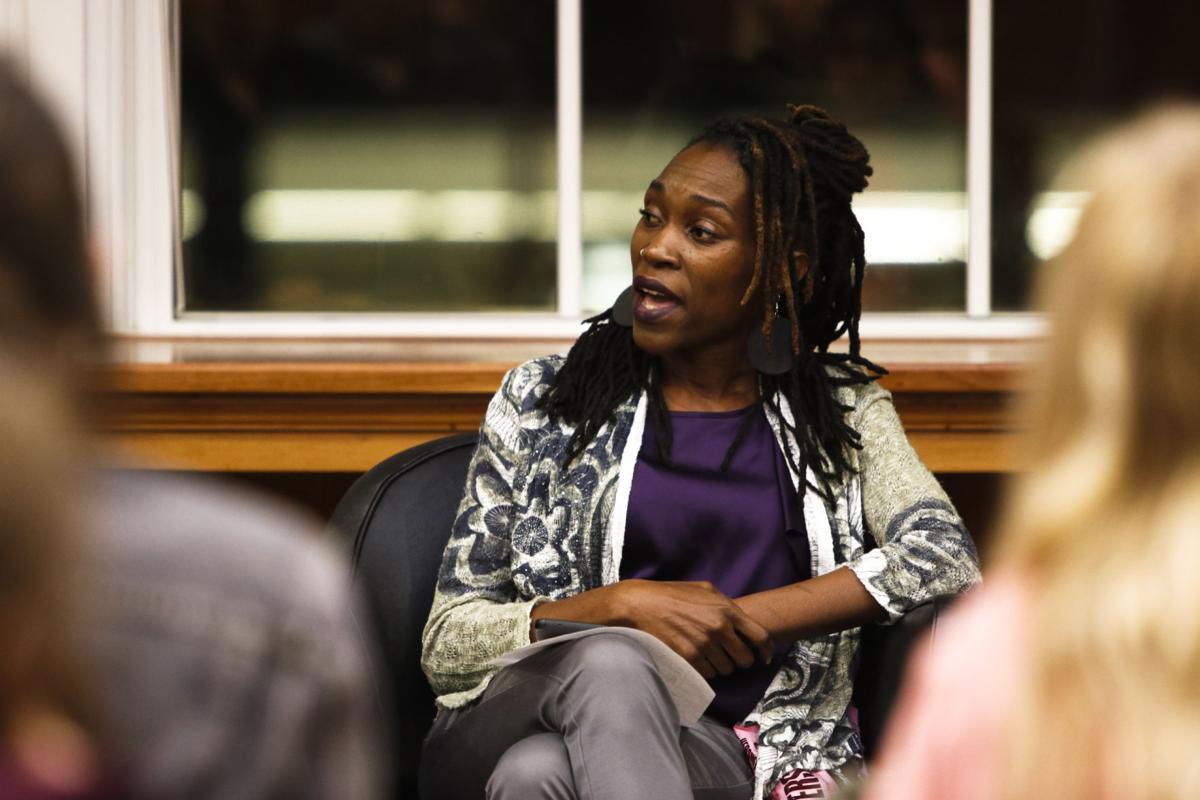 Mokah Jasmine Johnson, co-founder and former president of the Athens Anti-Discrimination Movement, speaks on a panel on Thursday, Feb. 13, 2020 in Athens, Georgia. Roosevelt @ UGA presented a panel discussion about the gender-based violence faced by women of color. (Photo/Taylor Gerlach)

Students and Athens residents listen to panelists on Thursday, Feb. 13, 2020 in Athens, Georgia. Roosevelt @ UGA presented a panel discussion about the gender-based violence faced by women of color. (Photo/Taylor Gerlach)

Mokah Jasmine Johnson, co-founder and former president of the Athens Anti-Discrimination Movement, speaks on a panel on Thursday, Feb. 13, 2020 in Athens, Georgia. Roosevelt @ UGA presented a panel discussion about the gender-based violence faced by women of color. (Photo/Taylor Gerlach)

According to panelist Caron Hope, assistant director of Health Promotion and Relationship and Sexual Violence Prevention, 1 out of 5 people in college experience some form of interpersonal violence.

“Only women [are] taught to walk with our keys and to check the backseat before they get into a car,” said Adrienne Baldwin-White, who served as the panel moderator. “We have to navigate our lives by the threat of violence, but men don’t have to.”

Hosted by Roosevelt @ UGA, a non-partisan, student think tank that emphasizes civic engagement and policy development, the panel talked for nearly 90 minutes to an audience of approximately 25 people. The evening focused on the topic of sexual assault.

The panel discussed the challenges survivors face after their assault, such as the barriers of reporting to the authorities, societal stigma and the following mental trauma, which can cause depression and post-traumatic stress disorder.

However, the panel said sexual assault is also a social justice and a political issue because institutions haven’t provided enough resources to women in-need.

The panelists touched on problems experienced by women of color. The panel said a major issue was a lack of safe spaces for black women to report their abuse. The panel also highlighted how

minorities’ struggle to interact with “historically hostile” institutions such as the police and the detrimental nature of black stereotypes.

Campbell, drawing on her counseling and research experience, said black women struggle to report their rapist, if he is black, because the report will perpetuate negative stereotypes about black men and hurt the larger community.

“There’s almost this extra layer of cultural, social [and] racial responsibility that a [black] woman feels that she has to other people … when she’s trying to deal with the the weight of the traumatic experience that she’s had,” Campbell said.

As a Spanish speaker, Schuler helps meet the needs of the Athens community who only speak Spanish, saying the biggest problems Hispanic women face are the language barrier and a fear of speaking about their assault. Additionally, Schuler says the community isn’t aware of resources like The Cottage.

“When it comes to the Hispanic community, what I have done is just let people know that this is a resource and it’s out there,” Schuler said. “If you go to somebody that looks like you, talks like you, you would feel more comfortable.”

Gantt stressed the need for “multi-layer solutions” to address the conditions — such as poverty, access to medical care and low wages — that put women of color at risk for sexual assault. She said not addressing the conditions only focuses on part of the problem.

Schuler encouraged the audience members to help combat sexual assault, wherever their degrees will take them and to “do the best you can there.”

“I just really wish that we could end all sexual violence. But this is not a perfect world, and it never will be,” Schuler said. “But I encourage all of you to do anything and everything that you can in the little places that you can.”

Correction: A previous version of this article stated an incorrect date for when the panel discussion happened. The Red & Black regrets this error and it has since been fixed.

Centering her candidacy around representing “the people,” Mokah Jasmine Johnson packed The Max Canada with her supporters as she launched her campaign for the District 117 seat in the Georgia House of Representatives on Jan. 18.

At a town hall in Athens on Feb. 10, Jon Ossoff outlined his campaign’s major focuses — improving access to healthcare and investing in infrastructure alongside clean energy and combating political corruption.

Panelists weigh in on Georgia’s past, Athens’s future elections

When he first moved from being a member to leading the board on Jan. 21, Athens-Clarke Count…

Georgia Republicans depend on rural Georgia, but some of their policies and proposals could hurt those communities.

Although the art of tattooing can be dated back to 3370 B.C., it did not always have the mainstream popularity it has today.