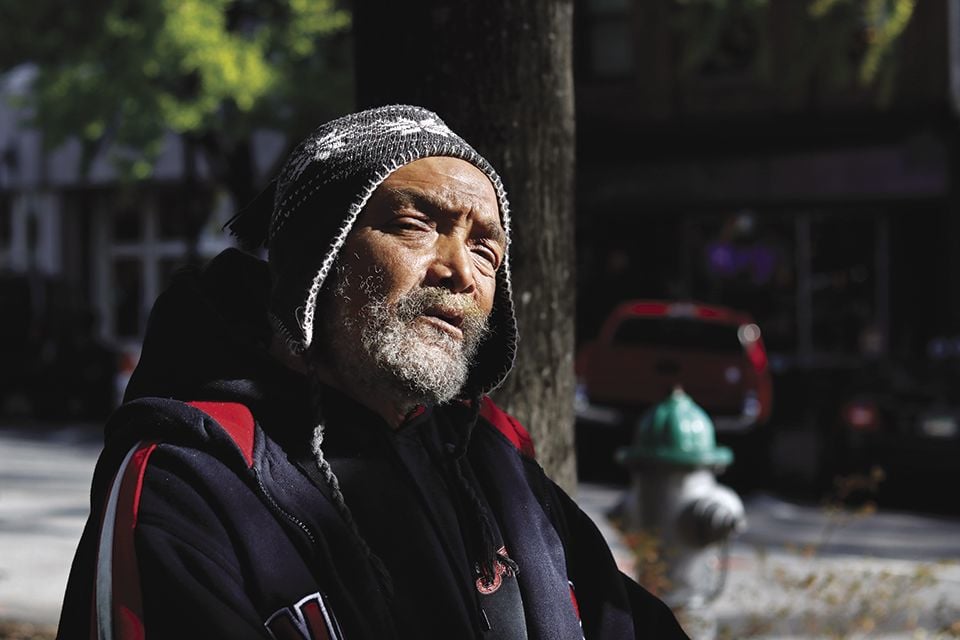 Harvey Evans, a Navy veteran, poses for a portrait downtown on Oct. 30. Evans has spent the last 14 months in Athens and panhandles in the area. 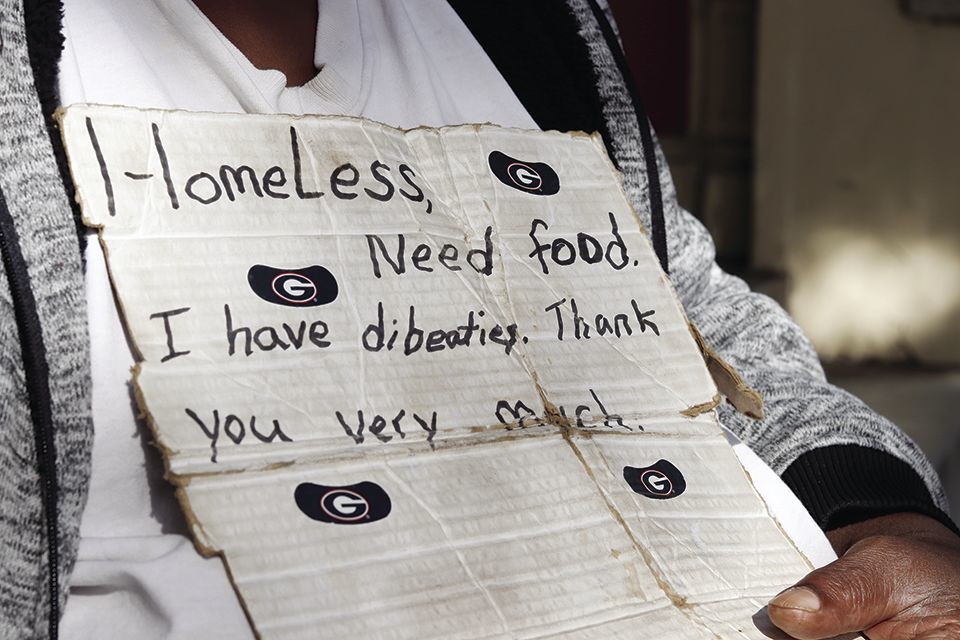 If you’ve been to downtown Athens, you’ve probably seen someone asking for money or help. When asked, you’re forced to make a decision: to give or not to give.

If you’re Marcus Guthrie, you see these requests as a means of survival and are hoping someone chooses to give.

Guthrie, a 58 year old from LaFayette, came to Athens in 2016. Since living here, he has panhandled and knows others who do as well.

Harvey Evans, 59, has lived in Athens for a little over a year. He asks people downtown for money but said he is only looking for enough to pay his power bill.

Originally from Chicago, Evans said he served in the Navy from 1979-1983. Veterans Affairs awarded him with a voucher for an apartment in Athens. His social security check pays the rent, but he said it’s not enough to pay his light bill.

Jennifer Davidson, a cashier at Horton’s Drug Store, has gotten to know many people who ask for money downtown.

Unless someone spends the time to get to know those asking for money, Davidson said it’s difficult to fully understand what people’s situations are.

“There is a really big misconception about what homelessness means,” Davidson said.

Davidson has personal relationships with 12 people downtown who she describes as “chronically homeless.” To help, she creates care packages with items tailored to people’s unique needs.

“You know, I’m employed. I’m blessed and able to have a vehicle to come to work with and park over there, and when it rains, I put on my rain jacket, I get in my car, and I go home,” Davidson said. “But I see what happens, and I take interest in what happens with the outdoor living human beings.”

"There is a really big misconception about what homelessness means."

Davidson said she’s seen the old parking meters downtown that read “Donations here will provide help for the homeless. Please do not give cash to panhandlers.”

The four meters were set up around downtown in September 2003, and Hayley Banerjee, the community development coordinator for Athens-Clarke County Housing and Community Development, said the meters have collected $222 so far in 2018, which is up from $106 from all of 2017.

Banerjee, also treasurer for the Athens Homeless Coalition, said the Athens Downtown Development Authority designates money collected from the meters for the AHC, a planning body that works with government and other groups to prevent and end homelessness.

As designated by the AHC, the money from the homeless donation meters has previously been used for bus pases for the homeless. The AHC, however, will announce a new use for the money put in the meters next January to ensure it’s used in the most responsible way, Banerjee said.

The verbiage on the meters’ signs, which Banerjee said the AHC had issues with, is planned to be changed to say, “Looking for a way to help? Donations to these meters support the work of the Athens-Clarke County Homeless Coalition.” The AHC’s website will be added to the signs as well.

“It’s complicated, because often people who are panhandling aren’t necessarily homeless and so these issues of homelessness and panhandling get tied up together when really they’re kind of separate things,” Banerjee said.

Although the message on the meters’ signs discourage giving to panhandlers, the ACC code does not prohibit panhandling.

Among other goals, ACC’s Housing and Community Development Department aims to reduce homelessness. It also administers grants from the U.S. Department of Housing and Urban Development. Grants that have been awarded to ACC include the

The science of giving

University of Georgia professor of social psychology Leonard Martin takes professional and personal interest in people’s giving practices, especially to panhandlers. Martin said as people age, rather than learning to share and give, they learn to create excuses as to why they shouldn’t.

“It seems to me we have something we’re supposed to do by nature, and if you don’t do that, you have to come up with some reason,” said Martin, based off in-class experiments with students.

Despite this, Martin said he does not always give when asked.

“I tend not to give to these people, which sounds weird ­— I don’t trust that they all need it the way they think they need it,” Martin said.

Guthrie and Davidson said they know people who panhandle whose needs are not as great as they make them out to appear.

“I know some people on the street have a nice home and a nice car. They will park their car, catch the bus and put on homeless clothes and bring their dogs or their animals and their kids to places they feel like they can get revenue or funds from people, and they use that for their advantage, and they never work,” Guthrie said.

Even knowing that some who panhandle are being deceptive, Davidson said she is not discouraged from helping.

Middle school students are getting in touch with their green thumbs, as the Grow It, Know it…

Less than a week after the 2018 midterm elections in Georgia, University of Alabama professo…

Over the years, the television show “Shark Tank” has obtained somewhat of a cult following a…

Dawgs for Diabetes provides support system for students with diabetes

Max Wieder, a junior chemistry major and the president of Dawgs for Diabetes, has had Type 1…

The state of Georgia has been holding its breath since the night of Nov. 6 when neither Bria…

Ethics Week reminds employees of their commitment to ethical culture, values and experiences

After seeing success in past efforts to evaluate registered sex offenders in Georgia, the Cl…

After recount, Athens Board of Elections sends certified election results to Secretary of State

The state of Georgia has been holding its breath since the night of Nov. 6 when neither Republican Brian Kemp nor Democrat Stacey Abrams defin…

Food, massages and conversations about femininity in the workplace greeted business women, as they walked into the Women in Business luncheon …

Hannah Crouch, a resident of Russell Hall, received a positive result for a home-testing mold kit on Sept. 30 after she had upper respiratory …

Downtown bars and the company Bird may both face some changes in how they conduct business in Athens-Clarke County.

According to a proclamation of the Student Government Association Senate, members of the University of Georgia community are encouraged to Dre…

A Clarke County School District bus monitor was arrested for simple battery on Nov. 15 after she “reacted to student behavior in a verbally an…

The United Campus Workers of Georgia is the first union for public university employees in Georgia. Key members point to Annelie Klein for spe…

Freemasonry, widely perceived as an organization shroud in mystery, exists, in part, to be present in and serve communities. The Athens' Freem…