Professors use trigger warnings to alert students of explicit or sensitive materials contained in syllabi, powerpoint slides and assigned textbooks.

Like other professors around the state, Andrew is concerned about the safety and well-being of students and her ability to foster open dialogue in the classroom if Georgia Gov. Nathan Deal signs House Bill 859, known as the Campus Carry bill, into law.

"But it’s not something we consented to. It’s something that affects us, but we really didn’t have a lot of say in this," added Mehrsa Baradaran, an associate professor at the UGA School of Law.

Nearly 150 University of Georgia students, professors and Athens community members met in Tate Plaza Wednesday evening to speak out against the campus carry proposal. The group then marched to the Arch downtown to demonstrate publicly its disapproval of the legislation.

Pending Deal's signature, HB 859 would allow anyone 21 years or older with a weapons license to legally carry a concealed gun on a public college or university campus except inside dormitories, fraternity and sorority houses and at athletic events.

"Which means it would be allowed in our classrooms, at our tailgates and at our club meetings," said Emma Krass, one of the protest organizers and a senior at UGA. 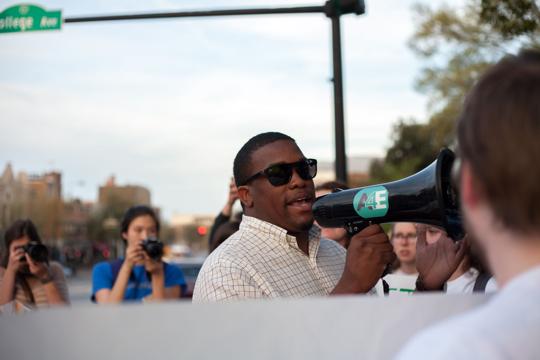 The bill passed the state legislature March 11 and was sent to Deal’s desk for his signature. But Deal suggested Monday that he will veto the proposal if lawmakers do not make substantial changes to the legislation.

One proposed alteration includes allowing governing boards of universities and technical colleges to have discretion in setting reasonable rules regarding disciplinary hearings and faculty and administrative offices, according to a statement issued from Deal’s office.

"Addressing these issues is an important step in ensuring the safety and freedoms of students, faculty and staff in our institutions of higher learning throughout the state," the statement reads.

But for the professors in Franklin College, Deal’s statement was not enough. The faculty senate unanimously passed on Wednesday a resolution opposing the campus carry proposal.

"[T]he only acceptable modification is that all Georgia colleges and universities be able to ‘opt out’ of campus carry if administrative and faculty bodies deem that as appropriate for their campuses," the faculty senate wrote in a letter obtained by The Red & Black.

In addition to the faculty letter, Student Government Association president Johnelle Simpson said SGA has drafted a letter to send to Gov. Deal and the state legislators, on behalf of every UGA student, opposing the proposal.

"I’ve talked to a lot of students, and most students don’t support this," he said. "Everyone’s fine with the way things are."

"As a faculty member, I do not want to have some untrained individuals packing heat in an environment that is supposed to foster creativity, debate and free thought."

But it’s not just students and professors that disagree with the proposal as it’s written.

"The bottom line — we oppose this legislation," Morehead said in the email.

But so far, none of these efforts have made a difference.

"Often our elected officials will ignore us as students because they think we’re uninformed and apathetic," Krass said. "But today they can no longer ignore us, because we’re here to show them that we don’t want guns in our classrooms."

Krass urged everyone in attendance at the protest to demonstrate their disapproval of the proposal by reaching out to Deal and state legislators. 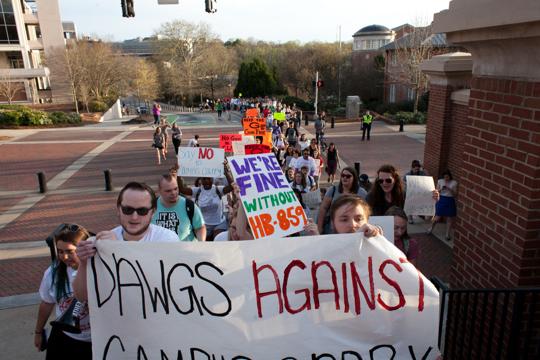 Lilian Zhu, a sophomore who took part in the protest, said she finds the legislation “absolutely ridiculous” and “out of touch.”

"Regardless of what your opinions are on second amendment rights, whether you think that citizens should have the right to own their own private gun, that should not extend to an open space like a campus," said the romance languages major from Iowa City, Iowa.

She said the law could discourage international students, out-of state athletes and potential faculty members from coming to UGA. It may also prevent Georgia students from staying in-state for college, she said.

"The whole point of the HOPE and Zell [Miller Scholarship] is to keep students in the state, but if the students don’t feel safe in their own institutions they’re not going to stay," she said.

"Often our elected officials will ignore us as students because they think we’re uninformed and apathetic. But today they can no longer ignore us, because we’re here to show them that we don’t want guns in our classrooms."

Brian Springsted, a senior international affairs major from Conyers who attended the event, said he has a general uneasiness about the student population carrying weapons.

"Mistakes can be made, arguments can get heated and accidents can happen, whether there’s a disagreement or not," said Springsted, who has owned two guns since he was an adolescent. "I’d rather limit the accidents to not being on this campus."

Ivan Ingermann, an associate professor in UGA’s theater and film studies department, said students, faculty and parents do not support this proposal.

"As a faculty member, I do not want to have some untrained individuals packing heat in an environment that is supposed to foster creativity, debate and free thought," he said.

Baradaran said she's here to teach to learn, study and meet with students, not to fear constant attack.

"This is not the Wild West," she said.

Letter to the Editor: In Defense of Campus Carry

Two proposed bills in the Georgia General Assembly vied to designate an official state dog for the Peach State; the English bulldog or the adoptable dog.

Donald Trump may be the 21st-century equivalent of Mussolini, but the real threat to democracy is right here in Georgia.

As campaigning began March 14 for the University of Georgia Student Government Association, the three executive tickets have begun to distinguish themselves through events, dialogues and endorsements.

One concern consistently echoed by University of Georgia students in favor of Georgia House Bill 859 — also known as the “campus carry bill” —  is that the current law does not fulfill their Constitutional right to bear arms and protect themselves.