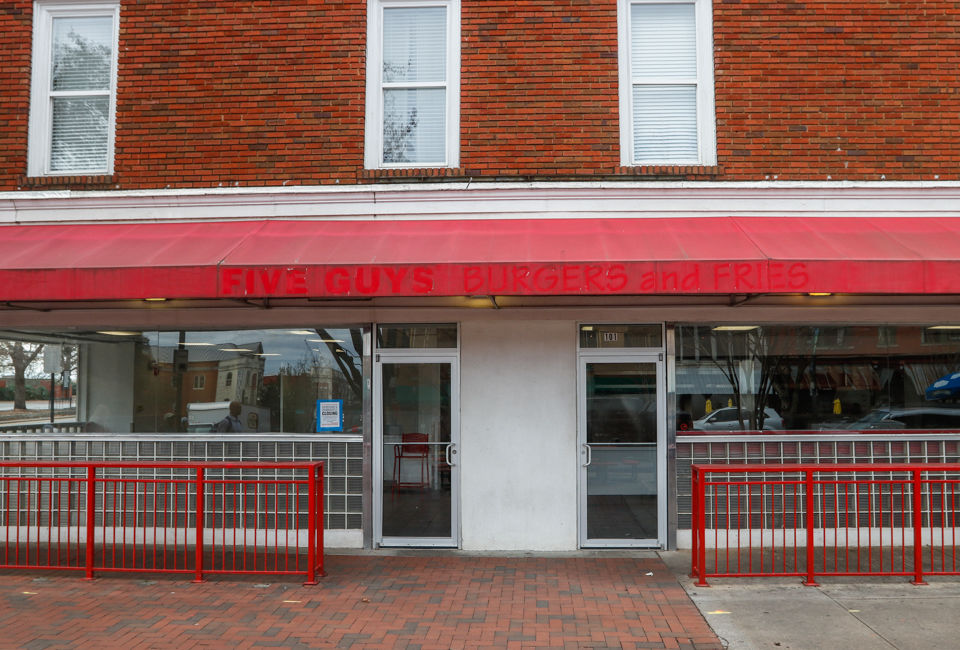 The former Five Guys Burgers and Fries building is pictured in downtown Athens, Georgia, on January 9, 2018. A new Chick-Fil-A restaurant will occupy the location later this year. (Photo/Chamberlain Smith, chamberlainlockett.com) 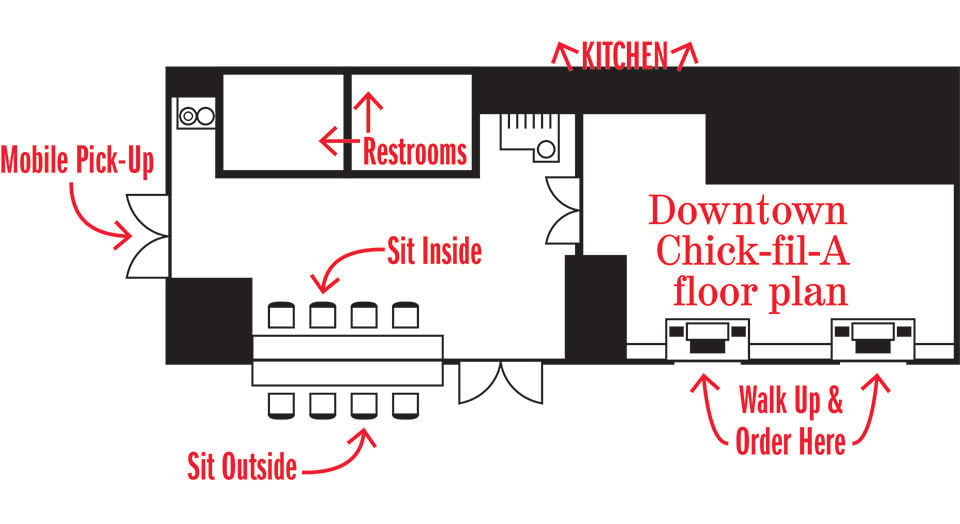 Chick-fil-A is expected to move into 101 College Avenue. According to documents filed with the Athens-Clarke County Planning Department, the restaurant will serve mostly walk-up customers and be roughly set up as shown above in this floor plan.

After a two-month lull in the conversation about Chick-fil-A coming into downtown, the Athens Historic Preservation Commission approved the plans for the popular chain to move into the former Five Guys location.

The commission met today, March 21, to further discuss and approve storefront modifications after drafts of the building went through the Athens-Clarke County Planning Department.

Design plans for the new restaurant are in full motion with plans to make this Chick-fil-A different from other locations.

Since downtown Athens is a walkable area, Thagard plans to create both Chick-fil-A and Athens’ first walk-up restaurant.

“It is not only a Chick-fil-A original but an Athens original, too,” said Kent Thagard, design and construction manager from Chick-Fil-A Corporate.

People of the Athens community will be able to walk up to an outdoor window, place their order and then pick it up inside. There will also be a separate entrance for mobile orders where online customers can quickly and conveniently retrieve their food.

Chick-fil-A’s design for the building also includes casement windows which provide a clear view to the outdoors and can be easily opened with the turn of a handle. The restaurant expects future approval for outdoor patio furniture and seating.

“On a nice day, the casement windows will open, and the entire area will open up,” Thagard said. “It’ll be a both an indoor and outdoor seating space that really pulls the inside outdoors.”

Other considerations include brick for the exterior of the building, glass blocks for the storefront and a non-shed style awning. Thagard drew inspiration for these ideas from the prior location of The Varsity that closed back in the ‘80s.

“We want to go back to its original look and feel,” Thagard said.

The Historic Preservation Commission approved the plans and modifications for the restaurant with exception to a change in the size of the sign on the exterior of the building.

The current design plans for the “C” in Chick-fil-A sign to be 5 feet tall with the rest of the letters of the sign at 2 feet For comparison, the “H” in the Horton’s Drug Store sign downtown is 4 feet tall.

The HPC requests for the “C” in Chick-fil-A to also only be 4 feet tall, and Chick-fil-A plans to accommodate its request.

For the fourth year in a row, Clarke County local chefs will be contributing dishes for the School Lunch Challenge at the Whitehead Road Eleme…

A lot goes on around Athens and UGA campus, and sometimes it can be hard to keep up. Bears celebrating their birthdays at Bear Hollow Zoo, to …

Chick-fil-A's new location downtown will be great for the economy of Athens and UGA students and Athens residents alike will benefit from the new location.

OPINION: Chick-fil-A in downtown Athens is unnecessary and problematic

The open space downtown where Chick-fil-A plans to build could better be inhabited by a more local business that does not present problems for the LGBT community.

First food trucks, now this: As of Aug. 27, Chick-fil-A is now providing Mealtime kits to make at home, similar to services such as Blue Apron…

There's power in the chicken... yumm!

Save Your Relationship and Get Your Ex Boyfriend/Girlfriend Back with 100%guarantee good result.

How to save your marriage and get back your ex lover urgently contact: Unityspelltemple@gmail.com