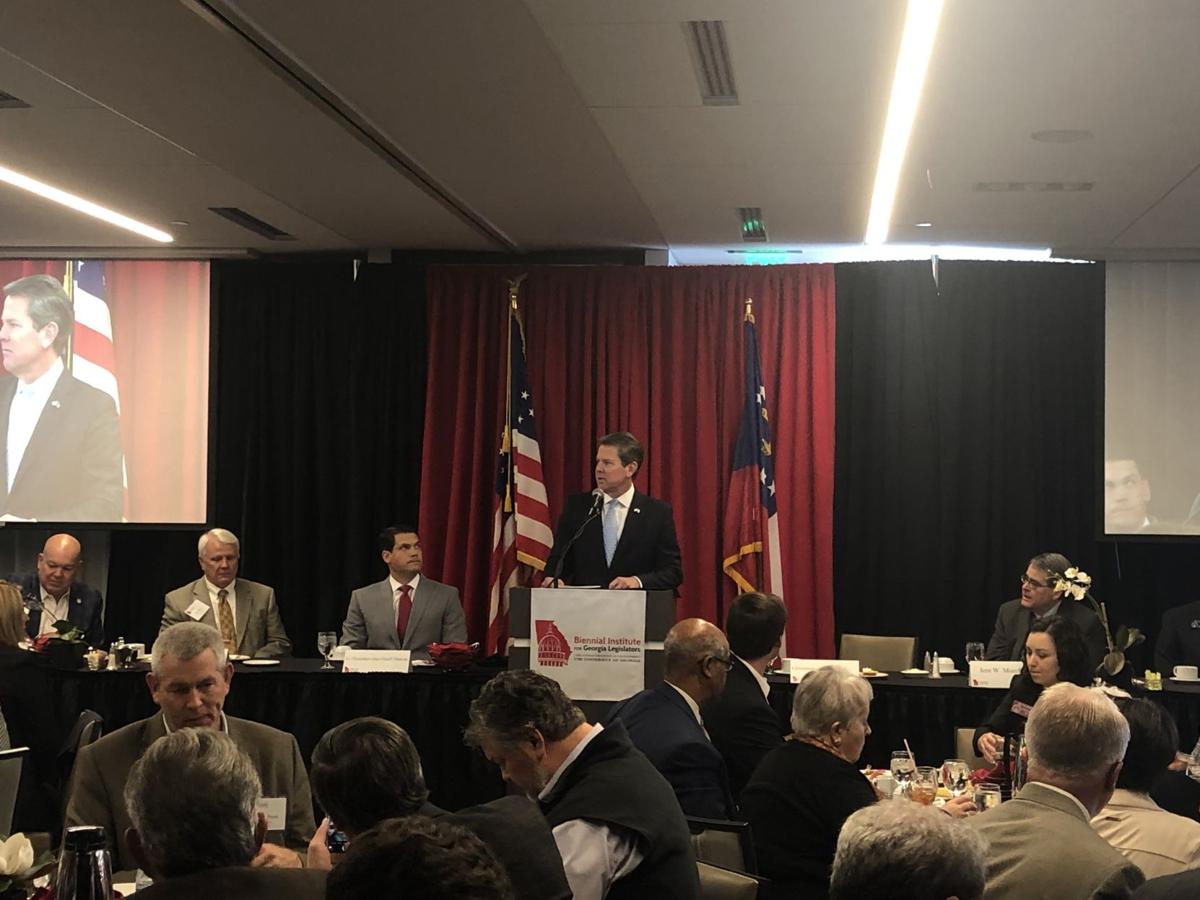 Brian Kemp addresses legislators at the Biennial Institute for Georgia Legislators on Dec. 11 in Athens, Georgia. 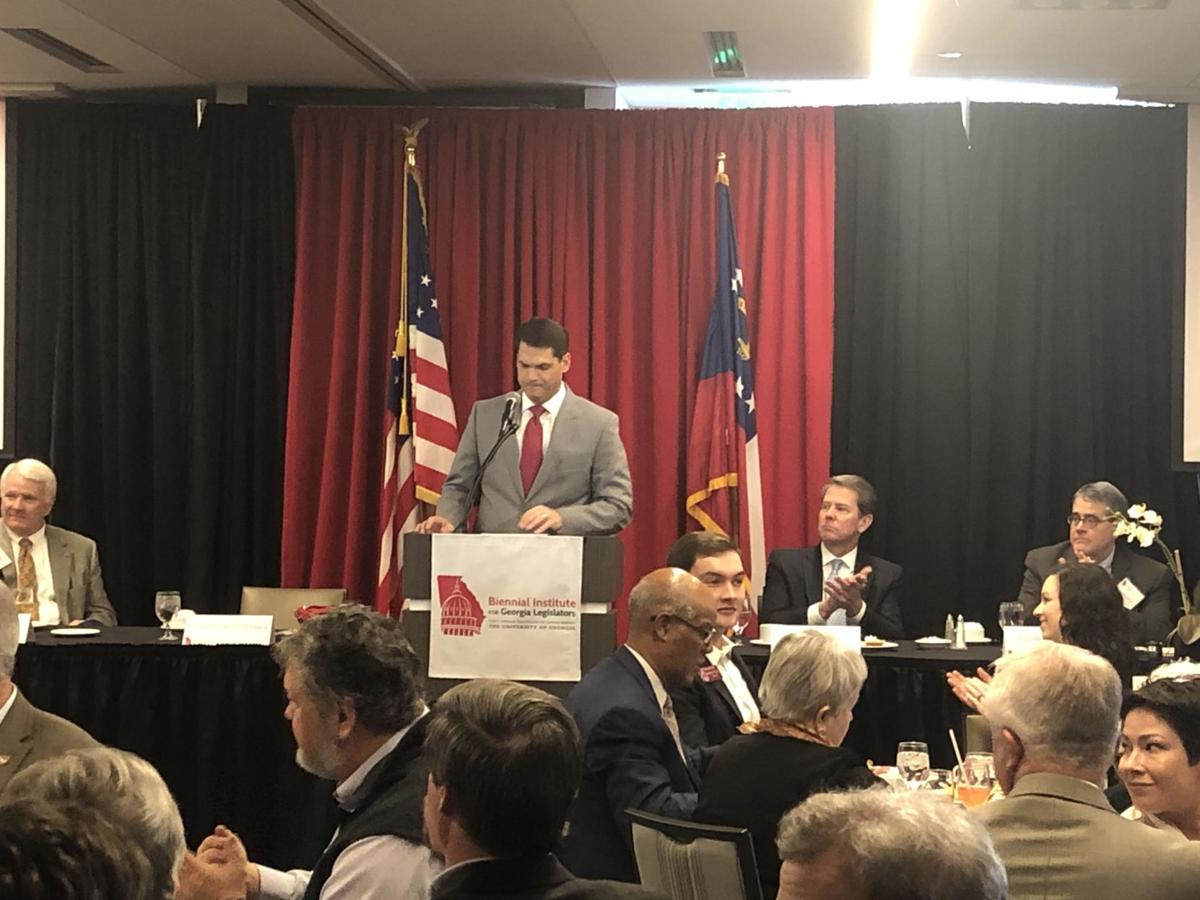 Bringing the three-day Biennial Institute for Georgia Legislators to a close, Governor-elect Brian Kemp delivered a speech on Dec. 11 to Georgia House and Senate members during a luncheon.

With campaign season over, Kemp focused on uniting the House and Senate members across party lines.

“I know that we we’re all not on the same team in the primary, the runoff or even the general election,” Kemp said. “But the campaign is over, and it’s time to put politics behind us.”

“Some [rural communities] continue to struggle, and in some areas, it feels like they’re still in the Great Recession,” Kemp said. “As governor, I will work to ensure that someone’s potential is not determined by their zip code or the county where they reside.”

Kemp said he hopes to work with the House Rural Development Council to better the lives of those in rural, impoverished communities.

“We can expand access to high-speed Internet, quality healthcare, good education, and by working with economic development leaders with a renewed focus on rural Georgia, we can grow high-paying jobs and expand investment in small business,” Kemp said.

Kemp spoke about safety during his speech, claiming street gangs to be an issue in rural, suburban and urban Georgia.

“Georgia is a distribution hub for drug cartels. These violent criminals use street gangs to traffic meth, illegal guns and beer,” Kemp said. “Now, I have a plan to dismantle street gangs: deport cartel leaders and protect our children in school.”

Before stating what he plans to do when he assumes the governorship on Jan. 14, Kemp spoke about the achievements of his predecessors Sonny Perdue and Nathan Deal, pointing out the low unemployment rate, which is 3.6 percent as of July 2018.

“Because of their leadership, our state has weathered the Great Recession, and, quite honestly, has emerged stronger than ever,” Kemp said.

Kemp reminisced about his days as state senator for District 46 from 2003 to 2007, telling recently-elected Georgia legislators serving is just as hard, if not harder, than campaigning.

And before closing his speech, Kemp said he anticipates meeting with the newly-elected legislators and asked them to join him as they “tackle the challenges” Georgia faces.

After advancing to a runoff election, the secretary of state has been decided. Republican Br…

After an almost four-hour long meeting, the Athens-Clarke County mayor and commission had it…

Mixed-use development to be built in downtown Athens area

UPDATE: Construction will begin in the next few weeks, said Blake Muldrow with Homes Urban, LLC. The development is expected to be completed i…

Almost a year ago, Horton’s Drug Store hired Jennifer Davidson as a cashier. Davidson’s background is in forensics, and she specialized in sex…

UGA ranks No. 1 in U.S. for number of commercial products released to market

Among 193 U.S. institutions, the University of Georgia ranked first for the number of commercial products released to the market in 2017, acco…

Graduation station: Everything you need to know about UGA's fall convocations by college

With finals wrapping up, the University of Georgia is preparing to celebrate its new batch of fall graduates. Along with the main commencement…

Lines in the sand: Database shows how future opportunity depends on quality of homebase

Socioeconomic disparity is evident in Athens-Clarke County based on data showing a roughly 34 percent poverty rate. A new database released by…

A salutation of “bienvenidos” and “welcome” greeted a crowd of about 70 people outside City Hall on Dec. 12.

Brian Kemp will hold his swearing-in ceremony on Georgia Tech’s campus on Jan. 14.

Sen. David Perdue (R-Georgia) and Democratic opponent Teresa Tomlinson have called for an end to the filibuster, but that would go too far. Instead, Congress should simply reduce the votes needed for cloture to 55.

Gov. Brian Kemp and other officials elected to statewide positions in November 2018 took the oath of office at the Georgia Institute of Techno…