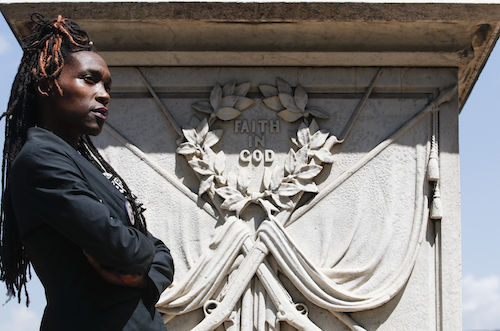 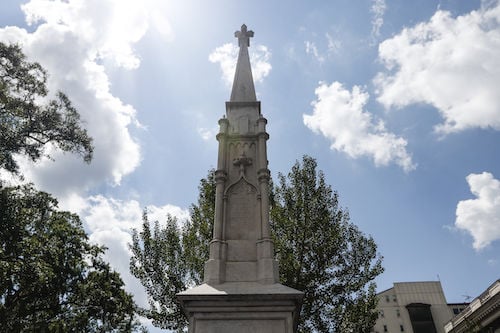 Every day, hundreds of people pass an obelisk-like monument standing tall in the center of Athens, right across from the Arch at the University of Georgia.

What many do not know, however, is the history behind the Broad Street monument and why some are calling for its removal.

Several protests and riots have erupted in cities throughout the country after the deadly violence that followed a white nationalist rally in Charlottesville, Virginia.

The white nationalist rally was in response to the proposed removal of a Robert E. Lee statue and has subsequently ignited a nationwide conversation on Confederate monuments’ place in society.

Now, statues across the country have been protested by community members and sometimes removed by city governments.

Athens is no exception. Community members such as Mokah Johnson, look to their own communities to continue the conversation locally, beginning with the “Soldiers’ Monument” on Broad Street.

"That war, bottom line, was about slavery ... I think [the monument] should move."

“For that monument to be in the middle of downtown, I think it’s not just to honor people who fought in a war. It’s deeper than that,” said Johnson, the president of the Athens Anti-Discrimination Movement. “That war, the bottom line, was about slavery. You can’t destroy history because whether we agree with it or not, people died. But I think it should move.”

The women of the Athens Ladies Memorial Association are the original supporters of the monument. In 1872, the women raised $4,444.44 to unveil the monument which originally stood on College Avenue near City Hall.

“This is one of the earlier monuments certainly in Georgia, if not the South, to the Confederate dead and their cause,” said Scott Nesbit, an assistant professor at the UGA College of Environment and Design who teaches a course in the Master of Historic Preservation Program. “It was erected on Confederate Memorial Day, and there was a big parade that started from the Chapel to the Oconee Hill Cemetery.”

Nesbit, who is from Charlottesville, originally believed enough time had passed since Civil War and that the monument should remain on Broad Street with an addition of historical context, such as an informational plaque.

“I was certainly willing to consider the idea that they should stay in place and that erasing the fact that these were put up was a bad idea,” he said. “But certainly the events of the last couple of weeks have inspired me to change my thinking on that.”

Nesbit said the events that transpired in Charlottesville connected to the Robert E. Lee statue would not have happened if the monument carried no meaning.

“I think that I have underestimated the power that they still hold,” Nesbit said. “They remain as powerful symbols of white supremacy that really have no place in a pluralistic culture.”

When the cornerstone for the monument was laid in 1871, Alexander S. Erwin, a captain who fought for the Confederacy, gave a speech in which he said the South would again “rise out of its present low estate,” according to a 1956 journal article in the Georgia Historical Quarterly.

That phrase and the concept of a resurgence of Confederate Southern values is what frightens Johnson the most.

“There is a lot of figurative language in it for me,” Johnson said. “People need to look at it deeper and ask questions. We need to get down to the truth.”

More than a name

The names of Confederate veterans featured on the monument are seen throughout Athens on street signs and UGA classroom buildings.

One of the names inscribed on the monument is Confederate Major William S. Grady, the father of Henry W. Grady, the namesake of the Grady College of Journalism and Mass Communication at UGA.

He said seeing his family’s name on the monument reminds him that these names were once attached to people who were, from his perspective, “fighting for a cause.”

“All the names on that monument are Athens residents who were killed in the Civil War,” Henry Grady III said. “You have to sort of put yourself in the time in which they were existing to see it was very different [from] today.”

Henry Grady III said he does not disagree with the “polarized emotions” relating to this time period but wants to recognize that “nobody today lived in the 1870s” and society was structured very differently.

“There’s a lot of history here,” he said. “It was constructed to honor individuals who gave their lives fighting for a cause they believe in. Now today, the causes have changed.”

"If anybody is protesting or threatening to deface it because they feel it is a monument representing slavery, that’s just wrong."

Henry W. Grady, the managing editor of the Atlanta Constitution, spearheaded the concept of a “New South” that emphasized business and progress. He advocated for better relations with the North.

However, Henry W. Grady’s New South did not include equal rights for African Americans, and he has historically been criticized for being a white supremacist.

“The supremacy of the white race of the South must be maintained forever, and the domination of the negro race resisted at all points and at all hazards, because the white race is the superior race ... [This declaration] shall run forever with the blood that feeds Anglo-Saxon hearts,” Henry W. Grady said in a speech to the Dallas state fair in 1887.

Despite his ancestor’s ideology, Henry Grady III still believes the Broad Street monument has a purpose in history because these attitudes were common in the context of the 1870s.

“It wasn’t a memorial to the Southern life of slavery at all,” Grady said. “If anybody is protesting or threatening to deface it because they feel it is a monument representing slavery, that’s just wrong. I really just hope people are studying the facts.”

While this monument is not the only Confederate symbol or monument in Athens, under Georgia state law, the relocation, removal, concealment, obscuring or altering of any fashion of any publicly owned monument or memorial is forbidden.

However, under the same law, the monuments can be relocated when relocation represents the only “appropriate measures for the preservation, protection and interpretation” of the monuments.

“So [the law] provides an exception. That provides a question for a judge to answer,” local attorney Russell Edwards said.

Edwards said that, for example, if a majority of people in Athens mobilize and want to see the monument moved to Oconee Hill Cemetery, where many Confederate soldiers are buried, the county could act.

“The mayor and commission could move it, claiming that they are acting to preserve and to protect this monument,” he said. “They would have a leg to stand on by pointing to the recent violent rallies hosted by white supremacists around these monuments.”

Henry Grady III said he hopes for an exchange in dialogue within Athens, so long as the public expression remains peaceful.

“I just hope that everybody will find a peaceful way to listen to and to study and to learn together,” he said. “And then to coexist together.”

A solution such as relocation would be ideal for Johnson, who hopes to call upon her local government to listen to the people of the community.

“We want to open a conversation and we plan to advocate for them to do something with it,” Johnson said. “It’s not about us. We want to do what’s best for the people, the majority and the people that are suffering. Their voices need to be heard.”

A protest originally intended to call for undocumented immigrants' rights turned into a candlelight vigil for the victims in the Charlottesville violence.

OPINION: Leave Confederate Memorial Day in the past

A longstanding disagreement between popular brunch spot Mama’s Boy and its 68-year-old neighbor has become political this year, resulting in an escalating battle between signs.

The University of Georgia Demosthenian Literary Society voted unanimously to remove a portrait of Robert E. Lee from its wall last night.

The deadly violence that broke out after white nationalist demonstrators and counter protesters clashed in Charlottesville, Virginia has conce…

At the Lyndon House Arts Center, the Athens-Clarke Heritage Foundation brought in Akela Reason to speak about the historical context and controversy surrounding confederate monuments, as part of their Brown Bag Lunch program.

Monday afternoon, Oct. 2, the Athens Anti-Discrimination Movement held a meeting at the Athens-Clarke County Library to discuss the organizati…

OPINION: There is a right and a wrong way to educate students about the Civil War in Georgia

The lessons taught in elementary schools are vital for a child’s development, and it is important that the school is doing everything in their power to foster an environment of learning and fairness.

What does Lori Loughlin have to do with the Broad street sign commemorating the "war for southern independence?" More than you might think.

What’s next for downtown Athens space after Confederate monument removal?

As construction continues on Broad Street after the removal of the Confederate monument on Monday night, local government officials and the community are looking toward the steps that must come next.