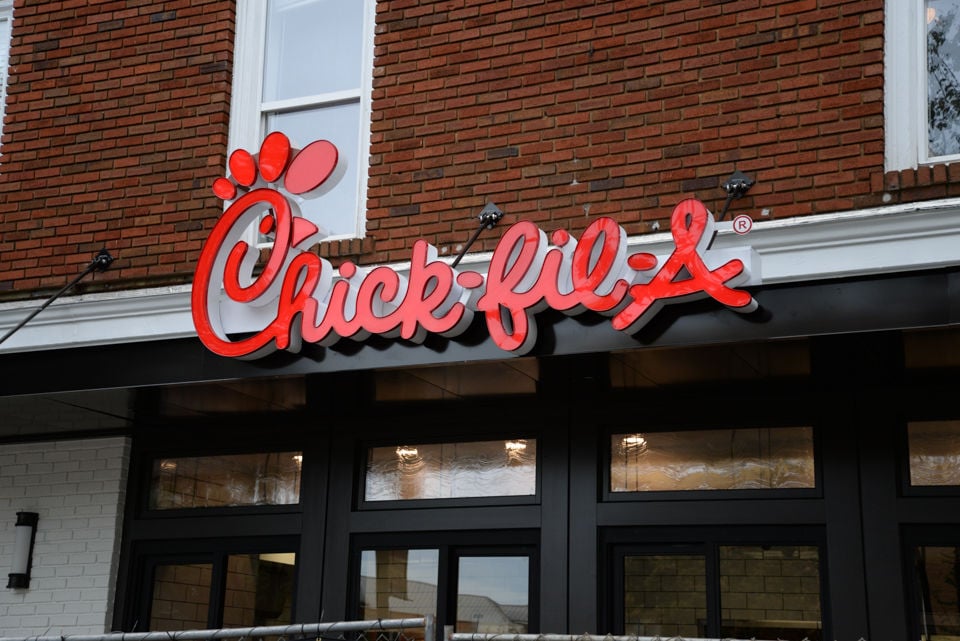 The Chick-fil-a logo is prominently displayed above the ordering windows at the new downtown location as seen on Oct. 25, 2018 in Athens, Georgia. After the restaurant opens, customers will be able to walk right up to the windows and order their food. (Photo/Julian Alexander) 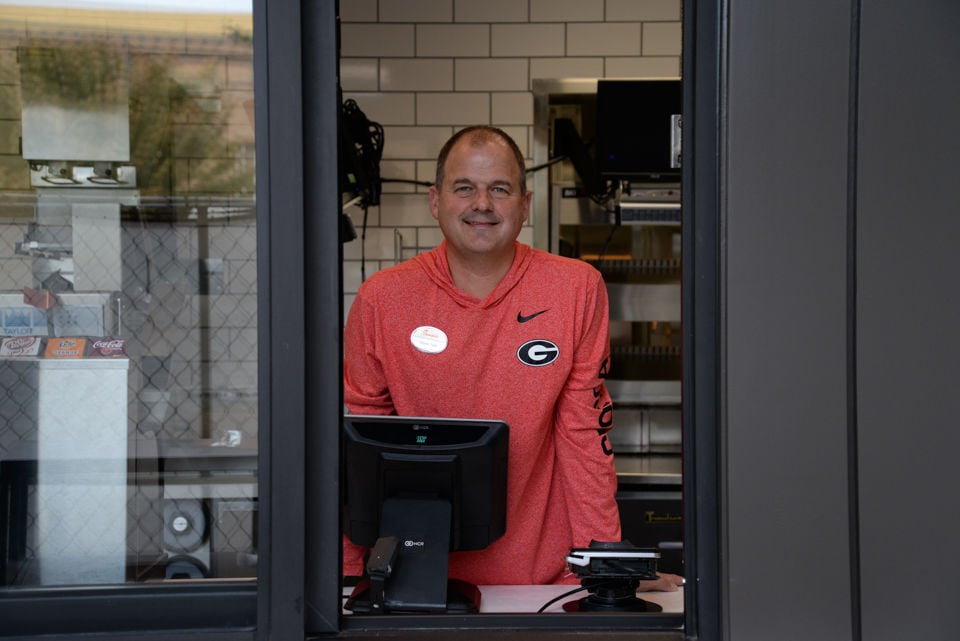 A friendly face: Shane Todd, owner-operator of Chick-fil-a Beechwood, Barnett shoals, and downtown locations, smiles through the ordering window on Oct. 25, 2018 at the yet-to-be-opened downtown location of CFA in Athens, Georgia. Mr. Todd is an Athens native and University of Georgia graduate. (Photo/Julian Alexander) 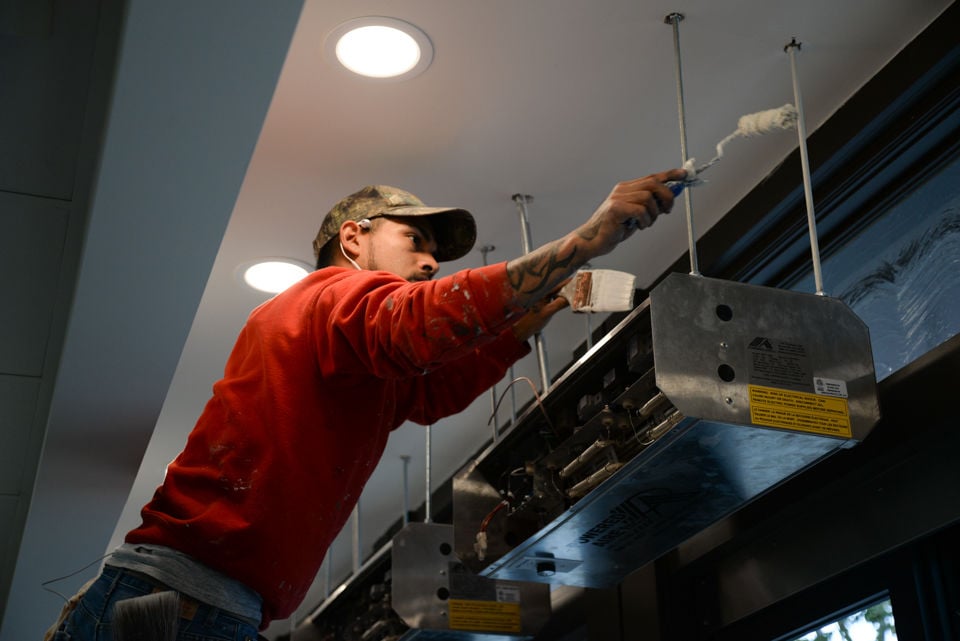 A construction worker paints the supports for space heaters on Oct. 25, 2018 at the new downtown Chick-fil-a location in Athens, Georgia. The heaters are mounted inside the restaurant above the ordering windows. (Photo/Julian Alexander) 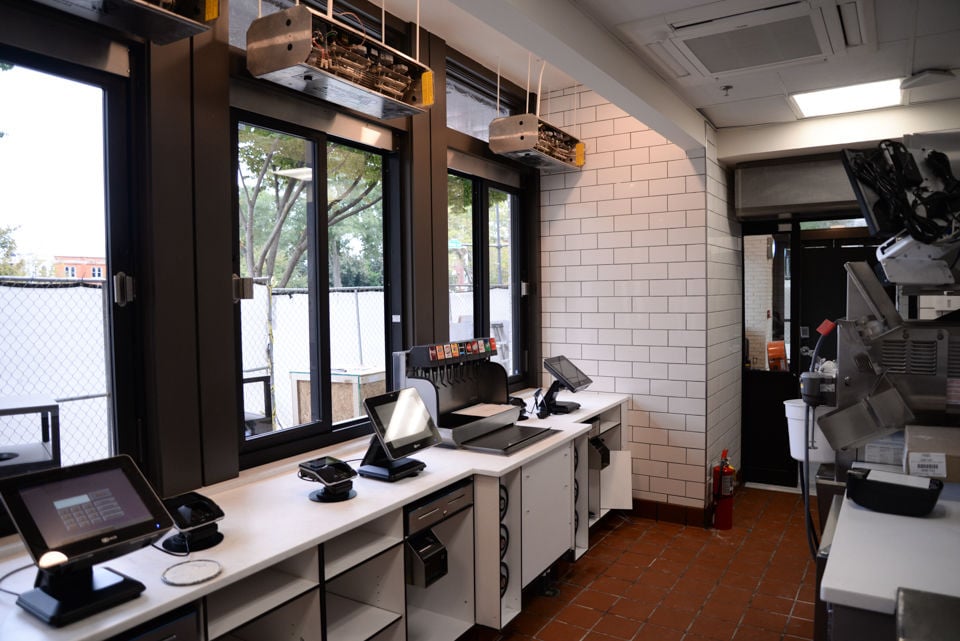 The customer service area of the new downtown Athens Chick-fil-a as seen on Oct. 25, 2018 inside the restaurant in Athens, Georgia. Due to limited space, this restaurant is geared towards walk-up and mobile serving; customers can order through the windows that open out onto the sidewalk adjacent to college avenue, seen on the left side of the frame. (Photo/Julian Alexander) 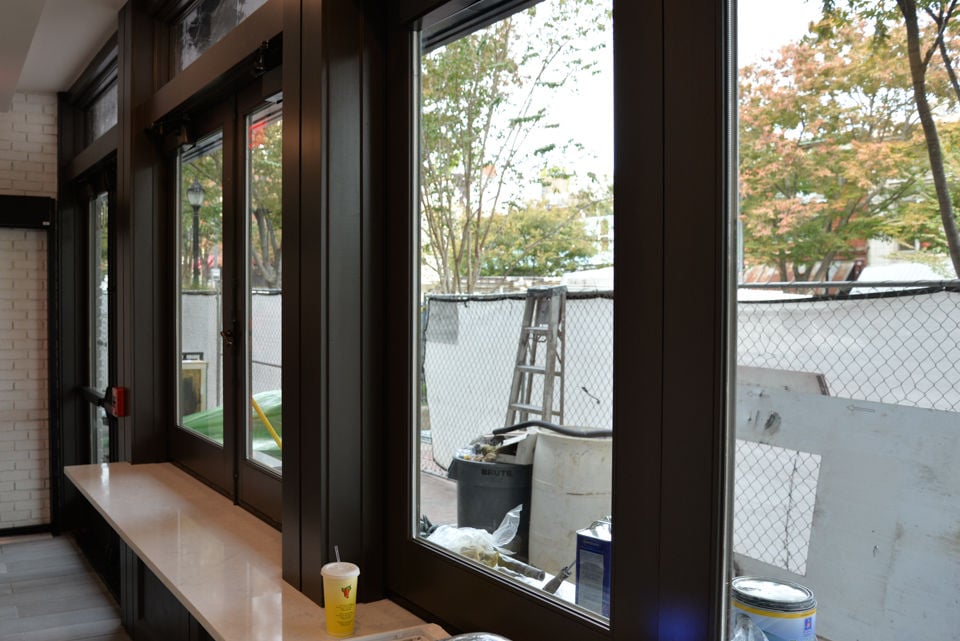 An interior shot of the customer area in the new downtown Chick-fil-a as seen on Oct. 25, 2018 in Athens, Georgia. This customer area will have limited seating along the counter visible below the windows; this restaurant is primarily focused on serving outside the restaurant. (Photo/Julian Alexander)

What was once the Athens Motel in the 1800s, with handmade bricks still decorating the area underground, the highly talked about Chick-fil-A will open one week from today on Nov. 5 across from the Arch.

VIDEO: A sneak peek inside the new Chick-fil-A opening in downtown Athens

The highly-anticipated Chick-fil-A will open downtown on Monday, Nov. 5. Its hours will be Monday-Wednesday 7 a.m.-10 p.m., Thursday-Friday 7-…

The building’s long history is what has driven Shane Todd, owner-operator of the Barnett Shoals and Beechwood locations, to put so much time and effort into the building and opening of this location.

“We’re spending a lot of time and money to make it look awesome. You can see the quality,” Todd said. “This corner’s going to look really good.”

A large part of what sets this location apart from the others is its grab-and-go concept. Instead of the traditional free-standing Chick-fil-As seen across the Southeast, this location will serve customers through windows.

There will be a window inside where customers can pick up mobile orders. Those ordering at the counter will be separated from the cashiers by a window. Customers will line up outside, and when the line gets too long to where it blocks passersby, employees will queue the line similar to the way they do in the drive-thrus of CFA.

“Really by the time you get up [to the register], we’re recalling your order, handing you your food, so really during busy times this is … just a pickup window,” Todd said.

Aside from the layout of the restaurant, the only other differences are the hours and the menu, which will be somewhat limited.

The hours will be 7 a.m.-10 p.m. Monday, Tuesday, Wednesday and Saturday, 7 a.m.-3 a.m. Thursday and Friday and closed on Sunday. A large concern for customers was how late this CFA would be open, Todd said.

The menu will largely be the same but slightly modified. Some items will not be included, such as the hash brown scramble breakfast burrito or the “superfood” kale and broccolini side.

The restaurant has the cooking and working space for a full menu, Todd said, but storage is a problem.

Nov. 5 is a little later than expected for the grand opening. First, the date was Oct. 17 and most recently, Oct. 31.

Construction was a large part of the delays.

“It’s a one of. We have not built this before,” Todd said. “We punch out free-standing stores, [and] you have the blueprint.”

Some of the delays included installing venting for plumbing, which had to be reworked because there are apartments above the building.

So far, Todd has hired 60 new people and plans to bring 12 employees from his other locations to have a staff of 72.

Because there will be three back-to-back home football games in November, what he likes to call “Mardi Gras,” Todd has to plan for a large staff.

“You have to have depth of team. If we can just make it through November, then I don’t really know what my staff size needs to be, but I know for November it needs to be deep,” Todd said.

Training of employees has also been different, having to take into account weather and safety concerns of being downtown.

“If it rains, you’re scampering on to your apartment. You’re not standing here in the rain,” Todd said. “We just have to learn the trends of the business.”

An idea that came to fruition in October 2017, the opening of a third location was an unexpected surprise.

PHOTOS: Sneak peek at the downtown Chick-fil-A to open Nov. 5

Every year, students at UGA look forward to Thanksgiving break, which for several years has …

UGA professors on Jamal Khashoggi’s murder and what it means for U.S. international affairs

A look ahead: Athens and UGA events you don't want to miss

From news media to social media, get out the vote initiatives have been prevalent in this ye…

If you ride the East Campus Express bus on a weekday morning, you may see people rushing acr…

Five things: Quick takes on things you might have missed

A lot goes on around Athens and UGA campus and sometimes it can be hard to keep up. From a f…

The Red & Black News & Brews: What to expect from the new downtown Chick-fil-A, brunch bill + more

In the fifth episode of The Red & Black's News & Brews podcast, the news editors update you on what you missed in news this past week …

The University of Georgia Latin American and Caribbean Studies Institute received $1.7 million of financial support from the U.S. Department o…