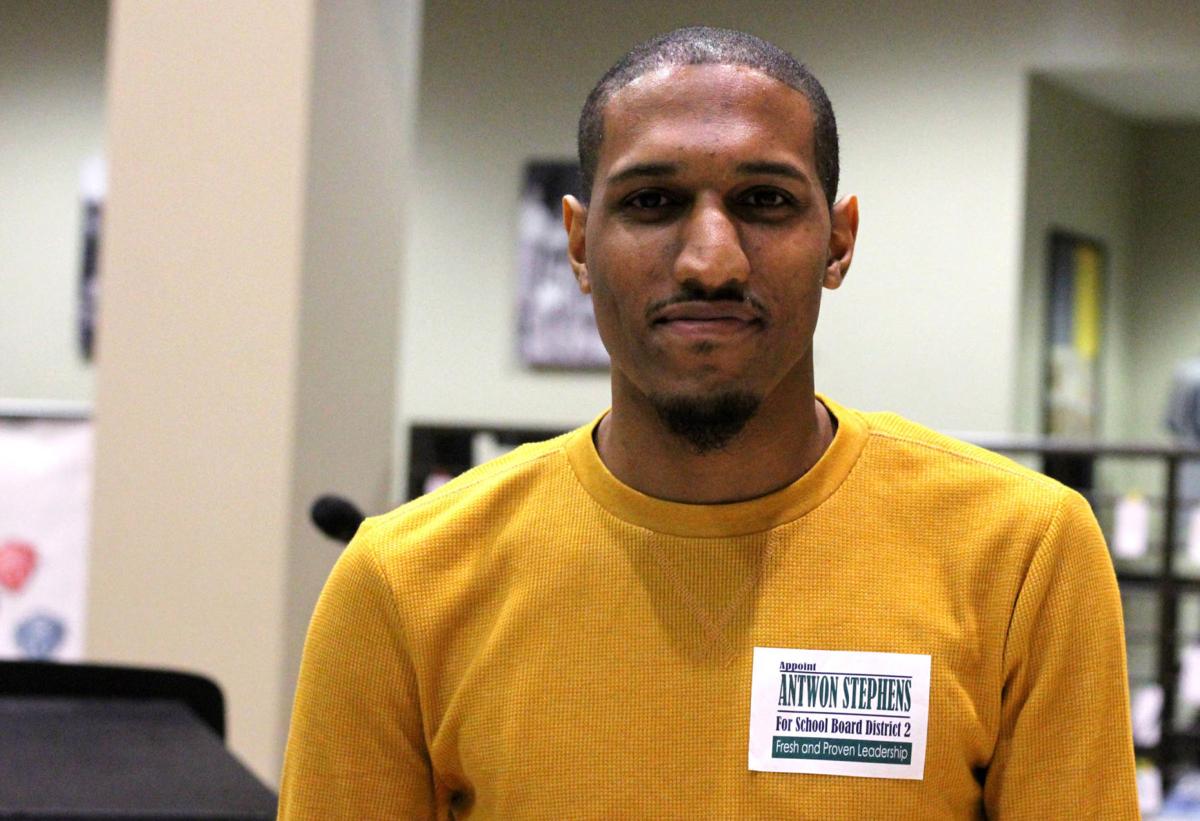 Antwon Stephens, 23, was appointed the District 2 Clarke County School District Board of Education member at the board meeting in a 4-3 vote on Thursday, Jan. 16. (Photo/Erin Schilling, 404.2919654) 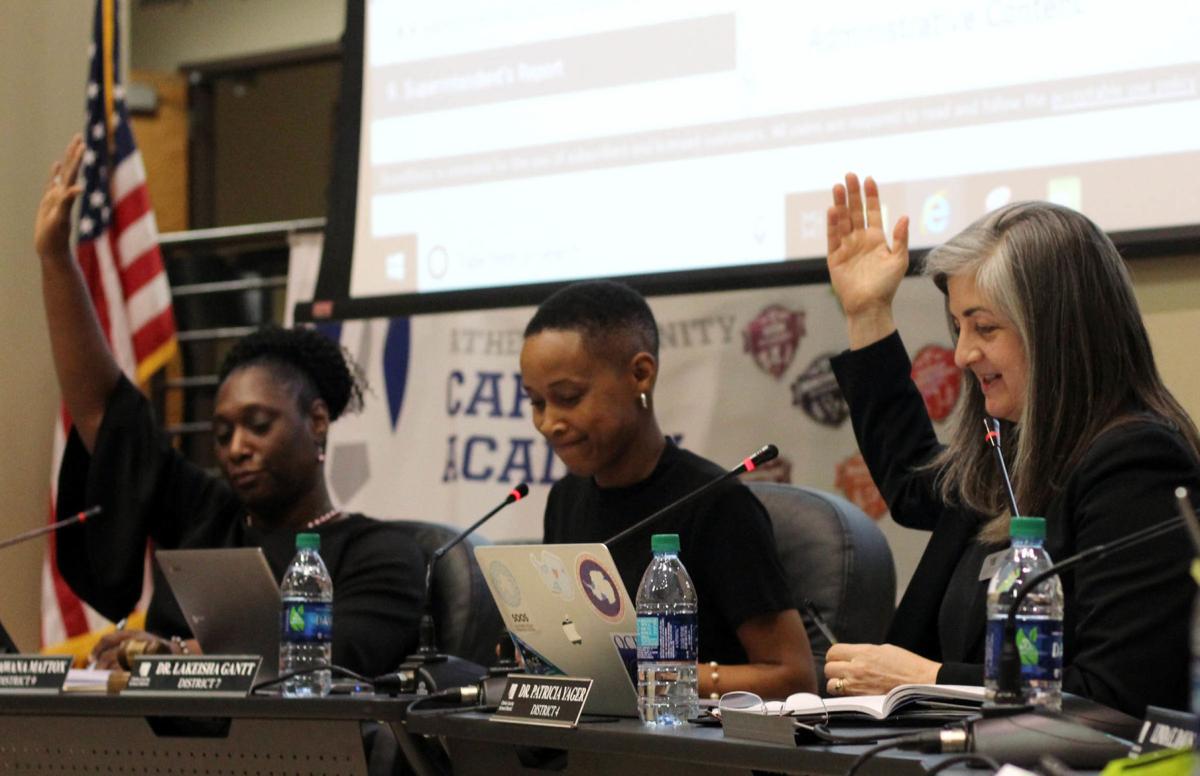 Antwon Stephens, 23, was appointed the District 2 Clarke County School District Board of Education member at the board meeting in a 4-3 vote on Thursday, Jan. 16. (Photo/Erin Schilling, 404.2919654)

Stephens is a 23-year-old Athens native who has been politically active for almost his whole life. He previously ran for mayor of Athens-Clarke County during the 2018 election.

The 2014 Cedar Shoals High School graduate plans to focus on school safety and hopes to bring the perspective of a recent student to the board.

“I have seen way too many friends and family members who are victims of gun violence in Athens-Clarke County today,” Stephens told the board and audience. “Education can lead the way, and I am here to advocate for equity not just for equality.”

Stephens will serve this term until the end of 2020. The seat will be up for election in May, and Stephens said he plans to run again.

The final split vote followed a heated discussion about the candidates and lengthy conversation about the voting process.

Five community members initially applied for the seat, which was opened after Frances Berry resigned for personal reasons in November.

One candidate, Alia Ghosheh, withdrew her name from the list during the candidates’ five-minute speeches to the board regarding their qualifications for the positions. Stephens along with Mary P. Bagby, Giovanna McDavid and Rafaela Delgado Marin were up for the board’s appointment.

But before even going to vote, the board disagreed on the best way to conduct the vote. After some discussion, the board decided to call out each candidate’s name and each member would raise their hand in support.

They hit a stalemate with three votes for Bagby, an active community member who previously ran for this seat and attends regular school board meetings, two votes for Delgado Marin, who immigrated to Athens from Mexico 25 years ago and wanted to give back to the district, and two votes for Stephens.

District 8 member John Knox was absent from the meeting.

Disagreements arose when the board went into discussions about the candidates in an attempt to get a majority. District 3 member Linda Davis said she supported Bagby because of her decades of experience with CCSD and continued active involvement. District 1 member Greg Davis said he voted for Delgado Marin in order to have representation of the Latinx student population.

District 6 member Charles Worthy stepped in after these comments.

“I’m going to say something that’s real simple,” Worthy said. “We as a board, we shouldn’t be getting into discriminatory kinds of things — ages, et cetera. That can cause a real problem, and I may blow the whistle on folks.”

This statement brought a slew of interruptions among board members, and board president LaKeisha Gantt moved the board forward to another vote and moderated the others.

During the second vote, Greg Davis and District 5 member Kara Dyckman switched their votes from Delgado Marin to Stephens, pushing him to the majority.

At the conclusion of this vote, many of the members of the audience left their seats, though both Bagby and Stephens stayed through the rest of the meeting.

However, Worthy disagreed with Gantt remaining president, citing policy that said the president couldn’t serve subsequent terms for more than two years. Gantt was named board president in May last year to complete Jared Bybee’s term, according to an OnlineAthens article. To comply with the presidency’s two-year term limit, Gantt will need to leave the position at least six months before her term ends in 2021.

Board members disagreed on the interpretation of this policy, and they decided to bring it to the policy committee for clarification at a later date.

The three-and-a-half-hour meeting ended with various approvals for district policies and programs.

Correction: Antwon Stephens' last name was misspelled in a previous version of this article. The Red & Black regrets this error, and it has since been fixed.

The controversy surrounding the West Broad Street School site was evident at the first community meeting about the development of the site.

The Clarke County Board of Education discussed Demond Means' departure from the school district but did not provide any public insight into negotiations for terminating Means' contract.

On Dec. 9, the Clarke County School District Board of Education upheld a motion to place CCSD Superintendent Demond Means on administrative leave and appoint his chief of staff, Xernona Thomas, as acting chief executive while the board seeks an interim superintendent.

With eight other candidates seeking the Republican nomination for Georgia’s 7th Congressional District in the 2020 election, Lynne Homrich, a former Home Depot executive and social entrepreneur, spoke to the College Republicans at the University of Georgia on Jan. 22 to garner support for her campaign, marketing herself as an outsider who wants to “shake things up.”

After more than a year of disputes among community and district leaders, the Clarke County School District Board of Education now faces a massive test with implications for the district’s reputation and students: the accreditation agency is coming.

Accreditation agency Cognia, formerly AdvancED and Measured Progress, will investigate potential standard violations filed against members of the board by outgoing Superintendent Demond Means on Jan. 26-28.

The District 2 appointee for the Clarke County School District Board of Education misled the board about his high school graduation.

Appointee misled board about graduation, questions raised about campaign funds

Antwon Stephens, appointed to the District 2 seat on the Board of Education on Jan. 16, misled the board about his high school graduation.

The recently appointed District 2 member of the Clarke County Board of Education has yet to make a public appearance in his new role amid investigations into his political past.

A new bill introduced by House Democrats in the Georgia General Assembly would allow immigrants with temporary permission to stay in the U.S. to pay in-state tuition at Georgia’s public universities, giving them the tools they need to succeed in society and benefiting everyone