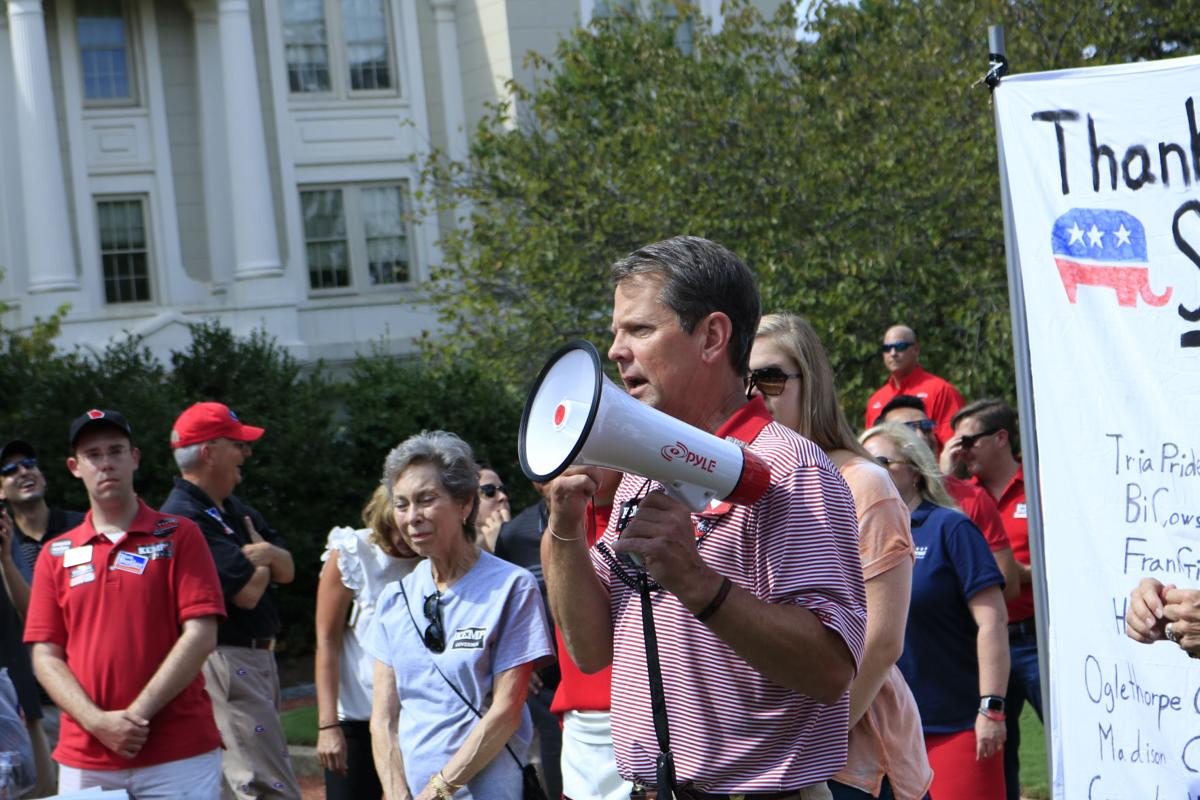 Brian Kemp, the Republican candidate for governor, encourages the audience at the College Republican tailgate to keep conservative leadership in the state. 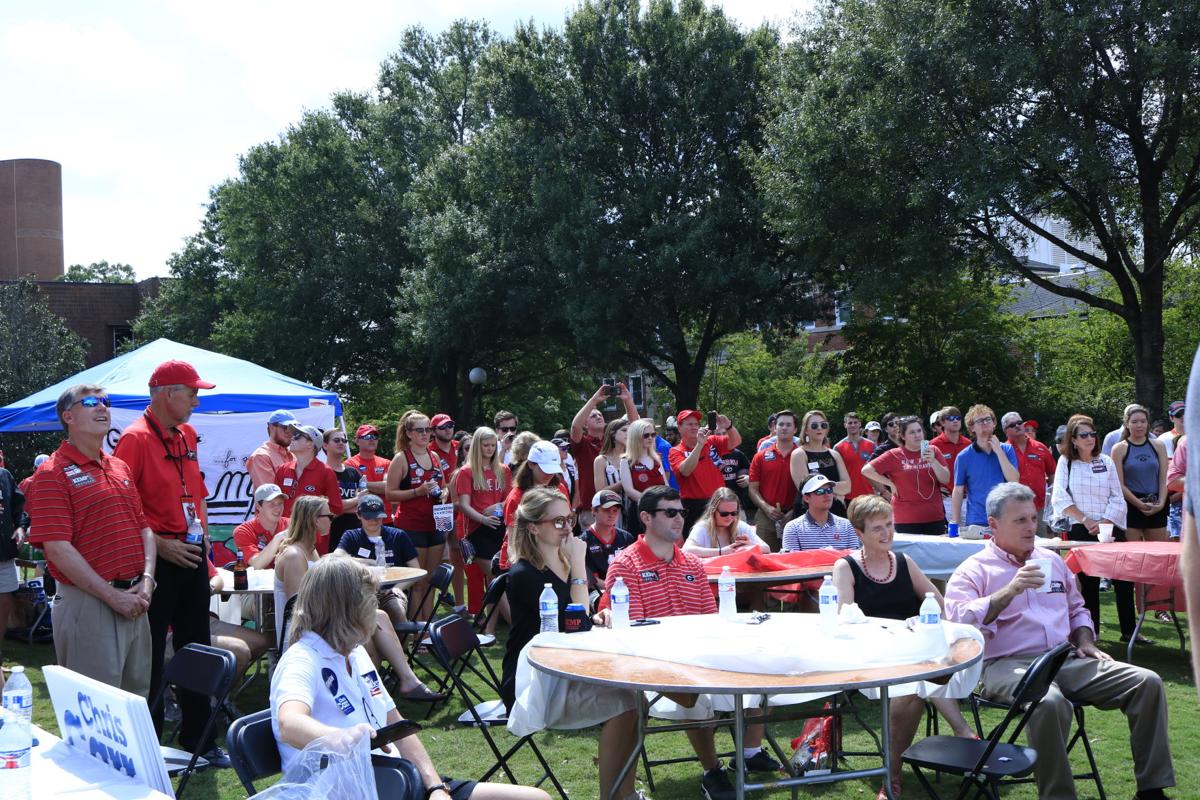 When the audience at the College Republican tailgate started pointing at a plane flying overhead just as Republican gubernatorial candidate Brian Kemp started speaking, he put down the megaphone and looked around.

After seeing a plane touting his name on a banner, he almost started to cheer. Then, he read the rest of it.

After some murmurs of confusion, the crowd at the tailgate laughed off the banner as "fraudulent advertising," and Kemp continued speaking. Other speakers at the tailgate, which included Republican state candidates down the ballot, made jokes about the plane in between encouraging the conservative vote and cheering on the Bulldogs.

"I sure hope that airplane has enough fuel to get out of state before it has to land," said Geoff Duncan, lieutenant governor candidate.

The plane was a political stunt by the Democratic Party of Georgia, director of strategic communications Seth Bringman said.

"Democratic Party of Georgia wanted to let UGA fans know where Brian Kemp stands on Medicaid and other issues, so we decided to have the plane carry that message and also refer to the Twitter account @BrianKemp for more information about Mr. Kemp's record," Bringman said.

This type of political advertising is new for the party, Bringman said, and party member Hillary Holley of Atlanta initially had the idea.

The plane flew for about 40 minutes, Bringman said, and the cost of the stunt will be in the party's financial disclosures.

The timing of the plane, which coincided almost perfectly with beginning of Kemp's short speech at Herty Field, was completely unplanned.

Bringman said the plane had been slated to fly over Sanford Stadium a couple hours before the Tennessee game because of the two teams' rivalry, and Kemp's presence was just "an extra bonus."

The Twitter account referenced is a spoof of Kemp's actual campaign Twitter, @BrianKempGA. The account has less than 500 followers and gears tweets specifically to target UGA football fans while sharing news stories with satirical tweets attached.

Meanwhile, Kemp tweeted from his actual account pictures of him and his family tailgating before the game, decked in red and black instead of orange and white.

The UGA College Republicans arranged for Kemp and about 10 other statewide Republican candidates to speak for a couple minutes each, all of whom encouraged continuing conservative leadership in Georgia.

The speeches were informal, and UGACR public relations coordinator Wesley Billiot said this has been the first time since he’s been involved the organization has brought state candidates up and down the ballot.

“We hope to bring conservatives across campus and in the community together to meet the candidates and show how good the chances we have in this coming election, we’re very confident,” Billiot said.

He estimated around 100 people came through the tailgate before Kemp's arrival, a good turnout for the organization.

Clarification: A previous version of this article did not specify the time when Wesley Billiot estimated the amount of attendees. This has since been clarified.

“It’s nice to see both sides have a sense of humor,” said Sebastian Puerta, the moderator, t…

Fall is finally here, and with the arrival of cooler weather and artificially flavored pumpkin beverages there's one thing everyone wants to a…

On the heels of its house’s 50th anniversary, Delta Gamma is in the process of renovating its house to “match the look of Milledge Avenue” thr…

A new shuttle service in Athens is offering a fun, affordable way for students, citizens and visitors to get around town since its inception a…

Derrick Maxwell, Cedar Shoals High School principal, did not originally intend to get into academia.

OPINION: The University of Georgia should help introverts make friends

The University of Georgia is a large school, so finding friends may be hard for introverts. UGA and its organizations should help introverts create lasting friendships.

Halfway through National Hispanic Heritage Month (Sept. 15-Oct. 15), Athens Immigrant Rights Coalition hosted a roundtable on Oct. 1 at the At…

The Athens-Clarke County Mayor and Commission voted unanimously on Oct. 2 to accept the Athens in Motion Biking and Walking Master Plan and au…

Four words: Get out and vote. Georgia residents have heard this phrase countless times from candidates on both sides. This time, however, Athe…

Politicians are very selfish because it only be just care about our name and seat. All the peoples can take the review of my shopbop reviews to get the know all history about politicals which can be help to choose a right person for giving vote.