U.S. Senate Candidate Jon Ossoff speaks to the audience during his 1 GEORGIA Town Hall Series at the Graduate Athens on Feb. 10. The Athens town hall was the first of the series. (Photo/Foster Steinbeck) 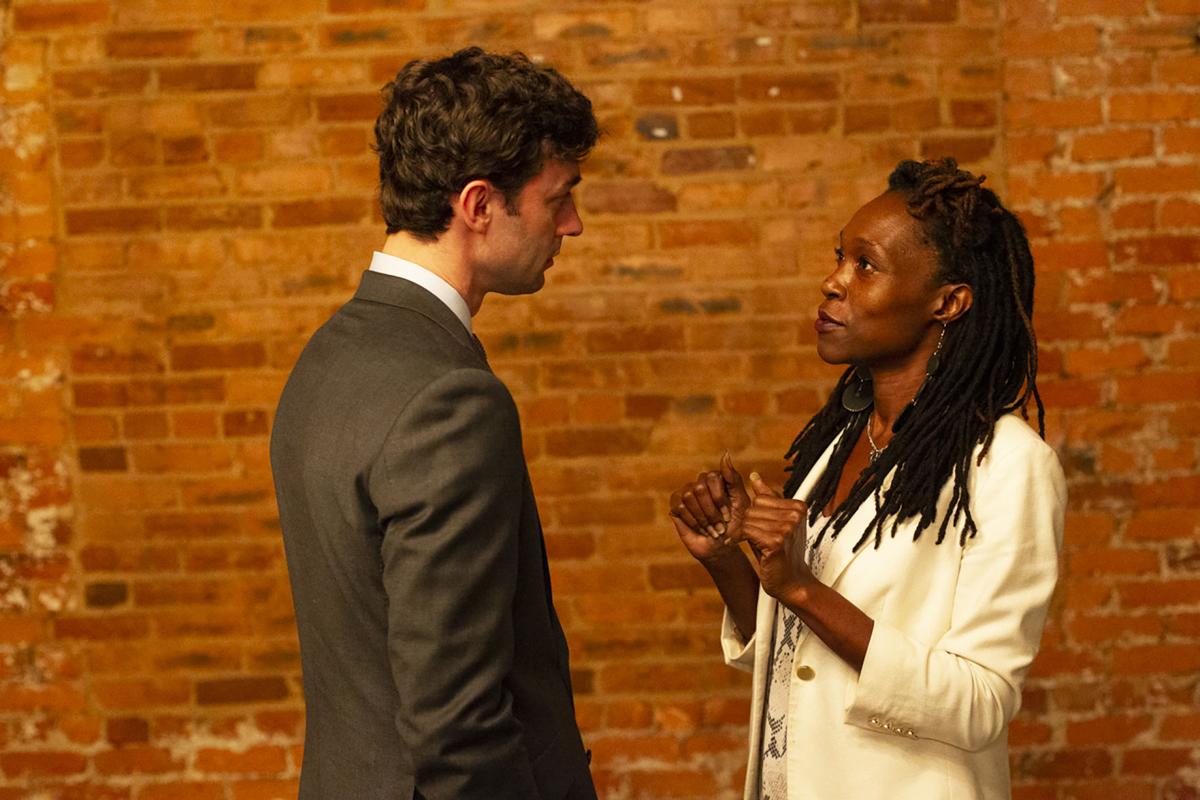 Jon Ossoff speaks with Georgia House District 117 candidate Mokah-Jasmine Johnson after the Town Hall ends on Feb. 10. Ossoff publically recognized Johnson during his opening remarks and said he looked forward to working with her. (Photo/Foster Steinbeck)

On a rainy Feb. 10 evening in the Graduate Athens, U.S. Senate Democratic candidate Jon Ossoff outlined his diagnosis of the problems plaguing America’s political system to Athens residents as the first stop of his campaign’s 1 GEORGIA town hall series. At the heart of America’s political woes, Ossoff said, lies corruption.

“I believe that corruption is what is destroying our political system. It's why so many people are suffering day to day. It's why we can't afford prescription drugs. It's why so many lack health care. It's why our environment is being destroyed,” Ossoff said. “It's why we have Donald Trump in the presidency.”

For approximately an hour, Ossoff outlined his campaign’s major focuses — improving access to health care and investing in infrastructure alongside clean energy and combating political corruption — and answered multiple questions from the audience about his views, ranging from reparations for slavery, gerrymandering, workers’ unions and prescription drug prices.

If elected, Ossoff promised the crowd that his first act as senator would be to back a constitutional amendment overturning the 2010 Citizens United v. Federal Election Commission Supreme Court ruling, saying the ruling has fueled corruption by allowing unlimited money into politics.

In that decision, the Supreme Court ruled that corporations could spend unlimited amounts of money on behalf of candidates in the form of independent expenditures.

Following suit, Ossoff’s campaign pledged to not accept money from corporate political action committees and seeks to build a grassroots movement by accepting small contributions from “people of all walks of life.”

During the town hall, Ossoff took aim at incumbent Sen. David Perdue, whose seat Ossoff is looking to take in the upcoming election, and criticized Perdue voting in favor of Trump’s 2017 Tax Cuts and Jobs Act and against lowering prescription drug prices by importing drugs from Canada in 2017. Ossoff claimed Perdue’s voting record was influenced by corporate PACs rather than his constituents.

“I would submit to you that if you want to understand how this political class and how this corruption works, you need look no further than our senator, David Perdue,” Ossoff said. “He is the caricature of everything that is wrong with our political system, not because he's a Republican but because of how he conducts himself in office.”

Ossoff has curried favor with some major representatives and political actors such as Rep. John Lewis, who endorsed Ossoff’s senate campaign. The two first worked together when — inspired by reading Lewis’ memoir “Walking with the Wind” — Ossoff served as a congressional intern for Lewis in the early 2000s.

“That was when I first really got to work for him and [get in] close contact with him,” Ossoff said in an interview with The Red & Black. “That experience changed my life. He took me under his wing and has been a friend and a mentor since then. I wouldn't be running without his support.”

Lewis campaigned for Ossoff’s 2017 special election for the sixth congressional district seat in the U.S. House of Representatives. After Trump appointed the former 6th District Rep. Tom Price to his cabinet that year, Ossoff made a competitive bid for the seat against Republican Karen Handel to fill the seat. Although losing by three points, Ossoff’s campaign raised nearly $30 million, the most ever raised for a U.S. house election.

Frye said Ossoff understands average peoples’ struggles and possesses the intelligence to “wrap his head around” the issues facing America, which he sees lacking among elected officials in Washington.

“When I was in school and we didn't believe in science, we got an F,” Frye said to the audience. “We got Athens, Georgia having 70 degree weather, massive flooding the next day, then a snowstorm in Athens the day after that. The extreme weather that we’re experiencing, that’s going to take some smart people who are dedicated to the cause to figure this out...That’s why I’m here to tell you that we need to vote for Jon Ossoff.”

Josh Gregory — a first year finance major at the University of Georgia — came to the town hall, despite describing himself as “a moderate Republican” who liked Trump’s and Perdue’s policies but not their characters. Gregory asked Ossoff why he should vote for him.

“I wanted to see what it would be like for a political candidate whose party differs from mine to answer a very real question, and I think he gave a very fair answer to it,” Gregory said. “I’m not sure whether I’ll vote for him, but I definitely have a lot more respect for him.”

The Democratic senate primary is May 19 and the general election Nov. 3. Ossoff started his town hall series in Athens to energize young voters, saying that the campaign “has to generate unprecedented youth turnout.”

If elected, Ossoff made another promise to the audience.

“The commitment I’ll make to you further is that I will come right back here and answer for every vote I take on your behalf and engage in dialogue like this with people who may not see eye to eye on every issue [with me],” Ossoff said.

Democratic US Senate candidates for 2020 speak in Athens

Perdue discussed his views on the Republican party’s progress, the economy and trade talks with China.

You can check if you’re registered to vote for the March 26 presidential primary on the Georgia My Voter Page, and if you’re not registered, you can do so on the Secretary of State’s website.

Today is the voter registration deadline in Georgia for the presidential primary on March 24. If you forget to register, you're excluded from voting. That unfairly excludes some voters, so Georgia should instead have Election Day registration.

OPINION: The Parties are polarized, not the public

Political parties have become highly-polarized over the last few years. However, the public is much more moderate, and politicians risk disaffecting voters by failing to appeal to moderates.