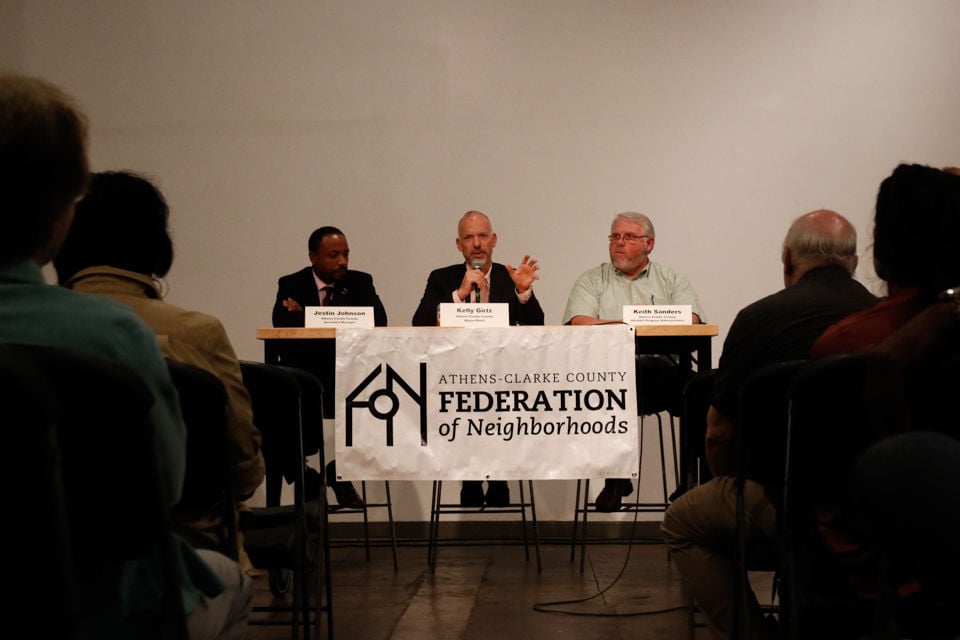 Jestin Johnson, Kelly Girtz and Keith Sanders spoke at a SPLOST forum on Monday, October 15, 2018. The forum was hosted by the Federation of Neighborhoods to speak about plans for SPLOST 2020 in Athens-Clarke County. (Photo/Tony Walsh) 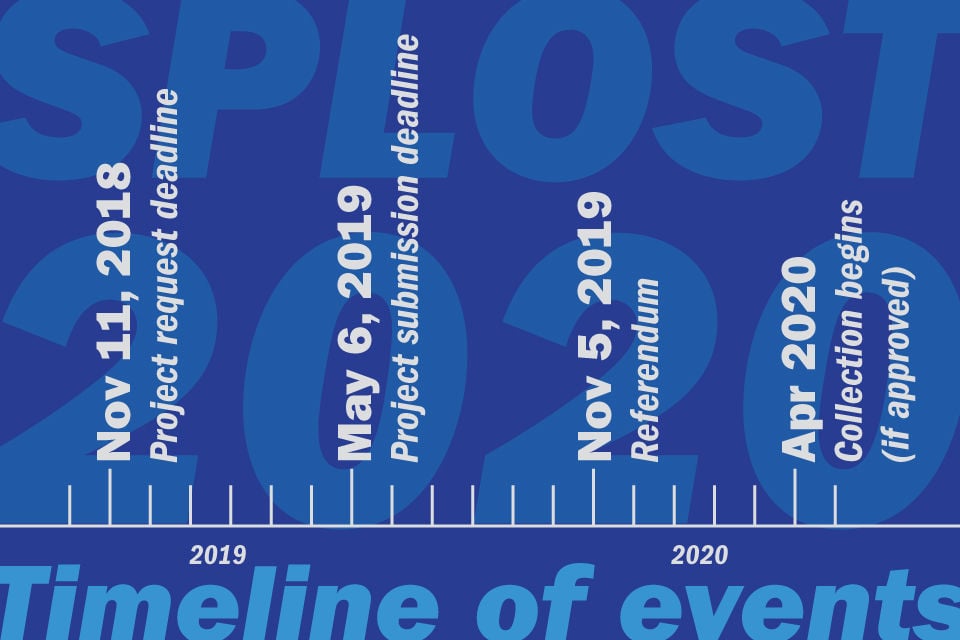 Jestin Johnson, Kelly Girtz and Keith Sanders spoke at a SPLOST forum on Monday, October 15, 2018. The forum was hosted by the Federation of Neighborhoods to speak about plans for SPLOST 2020 in Athens-Clarke County. (Photo/Tony Walsh)

The words of 16-year-old Swedish climate activist Greta Thunberg made their way to the Bob Snipes Water Resources Center conference room as members of 100% Athens, a grassroots campaign advocating for renewable energy, gave an impassioned presentation calling for action on climate change.

“We need hope. Of course we do. But the one thing we need more than hope is action,” said Cary Ritzler of 100% Athens, quoting Thunberg.

100% Athens was one of seven additional SPLOST project presentations heard by the SPLOST 2020 Citizens Advisory Committee on Monday, where presentations ranged from sustainability initiatives to combat climate change to an Athens children’s museum.

The CAC is tasked with narrowing down a list of 88 potential projects to fit an estimated $248 million budget for SPLOST 2020. The committee holds meetings twice a week where these projects are presented. A final list of submitted projects will be presented to the Athens-Clarke County Mayor and Commission for approval in July.

This project would provide equipment and facility upgrades to increase the amount of renewable energy production both at government facilities and for them. The renewable energy program would incorporate many systems including solar energy systems, geothermal systems, biogas systems and more.

According to the project proposal, this level of funding would provide enough equipment to generate the solar power needed to meet one third of the power needs of ACC’s government facilities.

“This protects the environment and it protects our citizens from increasing utility rates and it decreases the operating expense of the unified government,” ACC Sustainability Officer Andrew Saunders said. “Most importantly, this stewards existing resources.”

100% Athens, a grassroots campaign working to transition Athens to 100 percent clean and renewable energy by 2035, presented a proposal to use SPLOST funding as a source of gap funding for projects around ACC that would move ACC toward this goal.

Cary Ritzler of 100% Athens said southern counties are going to suffer disproportionately from climate change in the coming decade due to their already existing higher temperatures.

“We are going to see more droughts, more floods, more extreme weather and more heat waves,” Ritzler said. “It’s really important that we do everything we can to reduce our emissions and start to live more sustainably together.”

This project involves providing funds for land acquisition by ACC government for industrial and commercial property development for prospective businesses.

“What we’re hoping the impact of this project would be is to be more competitive when we’re bringing in companies to look at our commercial and industrial sites,” said Michelle Nguyen, director of the ACC Economic Development Department.

Nguyen said she wants companies to be comfortable when they bring their projects to Athens.

“[We want to make sure] that their timelines are going to be completed quickly, that we are being proactive and we are reaching out to these companies,” Nguyen said.

This project would provide for a Tech Industrial Complex at 160 East Strong Street that supports a variety of uses within the entrepreneurial and innovative industry sectors.

“[These two projects] help support all of the potential that companies see when they look at Georgia and they say, ‘We don’t want to be in Atlanta and Athens is awesome,’” Nguyen said. “Well, we don’t want to lose these guys and so what I’m asking for you guys to do is support us as we help capture these opportunities.”

This project involves establishing a children’s museum in Athens featuring a mini version of well-known Athens businesses which would provide engagement, education and entertainment.

Little Athens, a non-profit established in 2016, currently acts as a mobile museum that hosts pop up events at Georgia Square Mall, reaching more than 1,000 children annually.

This museum would allow them a permanent two-story physical location. The downstairs would have room for eight exhibits and a large climbing structure in the center surrounded by an indoor track where children can ride bicycles while the upstairs would have birthday party rooms, creative spaces and a music exhibit.

This project involves funding the acquisition of properties in ACC in order to protect them from development.

SPLOST in translation: Explaining the funding process for SPLOST 2020

There are 88 projects proposed for SPLOST funding for 2020. Here's a deeper look at three of them born from the zeal of community members.

The CAC is currently faced with 88 potential projects and, according to Keith Sanders, the SPLOST Program Administrator, the SPLOST 2020 budget is about $248 million. The CAC is tasked with narrowing down the projects to submit a final list of proposed projects within the budget to the ACC Mayor and Commission in July.

Kicking off the penultimate week of SPLOST 2020 projects, the Citizens Advisory Committee heard seven projects, including some involve the expansion of trails, improvements to the Fire Department and construction of a new correctional facility.

Multiple potential projects were presented to the Citizen Advisory Committee, which is tasked with narrowing down 88 possible SPLOST 2020 projects for the Mayor and Commission.

The Central Services Department has proposed a new “judicial center” as well as a plan to renovate the historic courthouse.

The Citizen Advisory Committee is currently faced with 88 potential projects and, is tasked with narrowing down the projects to submit a final list of proposed projects within the budget to the ACC Mayor and Commission by July.

UGA professor's nonprofit advocates for a 'social bill of rights'

The non-profit grew out of Richard Winfield's unsuccessful run for a U.S. Congressional seat in 2018.

An accepted settlement for a former ACC police officer who hit a suspect with his car highlighted the Mayor and Commission meeting on Tuesday night. The Commission also voted on a public arts project for downtown and zoning changes regarding halfway houses.

In the long run, the Cedar Creek solar array is estimated to save consumers money by reducing overall electricity costs for the community.

The Special Purpose Local Option Sales Tax Citizens Advisory Committee narrowed down its scope of recommended projects for 2020 from 88 to 34 after several months of meeting.

For SPLOST 2020 funding, the CAC was presented with 132 projects — 88 originals and 44 alternates — and chose 34 to recommend to the mayor and commission on March 26.