A June 1 memo from Athens-Clarke County Police Department Chief Cleveland Spruill to Assistant County Manager Deborah Lonon reveals that Spruill gave the order to use tear gas to disperse protesters from the area around the Arch around midnight on May 31.

The memo, which was sent out in a newsletter by District 6 ACC Commissioner Jerry NeSmith, details decisions made by the chief throughout Sunday, when thousands of protesters marched through downtown Athens to protest police violence as part of a nationwide outcry over recent killings of unarmed black people.

NeSmith confirmed to The Red & Black that the memo was legitimate, saying he received a copy from Lonon.

According to the memo, 19 people were arrested after ACCPD officers deployed tear gas. Six of the arrested had addresses “outside the ACC area.”

Spruill also wrote that two tents erected in the road by protesters contained “stacks of bricks … that we believe the group was planning to use to throw at officers or use to damage buildings.”

Writing that the police had “observations and intelligence gathered that destructive and violent behaviors by the remaining group was imminent,” Spruill asked Lonon to implement a 9 p.m. curfew and restrict the downtown area, which Lonon approved and signed. ACC did not communicate the curfew until about 9:45 p.m., however.

Spruill wrote: “Throughout the evening, officers also observed signs that these individuals were planning to engage in destruction and violence, likely targeted against government buildings and infrastructure and against law enforcement officers defending them.”

In the memo, Spruill cited long weapons and handguns (carried by Boogaloo protesters, part of a far-right extremist movement that was present), as well as protesters carrying milk (to wash their faces after being exposed to tear gas), leaf blowers (to blow tear gas away), gas masks and heavy backpacks. The Boogaloo protesters arrived around 7 p.m. but were gone before 11 p.m.

According to the memo, from 9 to 11:30 p.m. ACCPD cleared downtown areas except for the area near the Arch where 150 to 200 protesters remained.

At around 11:55 p.m., an ACCPD drone hovered over the protesters and delivered a prerecorded message telling them to disperse. The message, which was replayed several times, said the protest was unlawful, and that protesters could face arrest and use of force if they did not leave the area.

“After delivering this message multiple times and receiving no response, I made the decision to utilize gas as a final attempt to get the crowd to disperse without having to use higher levels of force,” Spruill wrote.

The protesters who were tear-gassed had been peaceful, although the Confederate monument on Broad Street was spray painted with graffiti, which was washed off Monday morning.

The officers using tear gas were part of the ACCPD Special Response Team, the memo said.

On scene were ACCPD officers, as well as National Guard troops and state police. The memo also says ACCPD coordinated with the University of Georgia Police Department.

Some more clarity was provided about a gun scare during the protest. At around 6:45 p.m., the crowd briefly panicked and began to run because an attendee was thought to have a handgun. According to the memo, police took the man into custody before determining it was a “cigarette lighter in the shape of a gun,” and released the man without charging him.

The memo also mentions a separate incident at Academy Sports on Atlanta Highway, where 13 people were arrested for burglary and damage to property.

Read the full memo below: 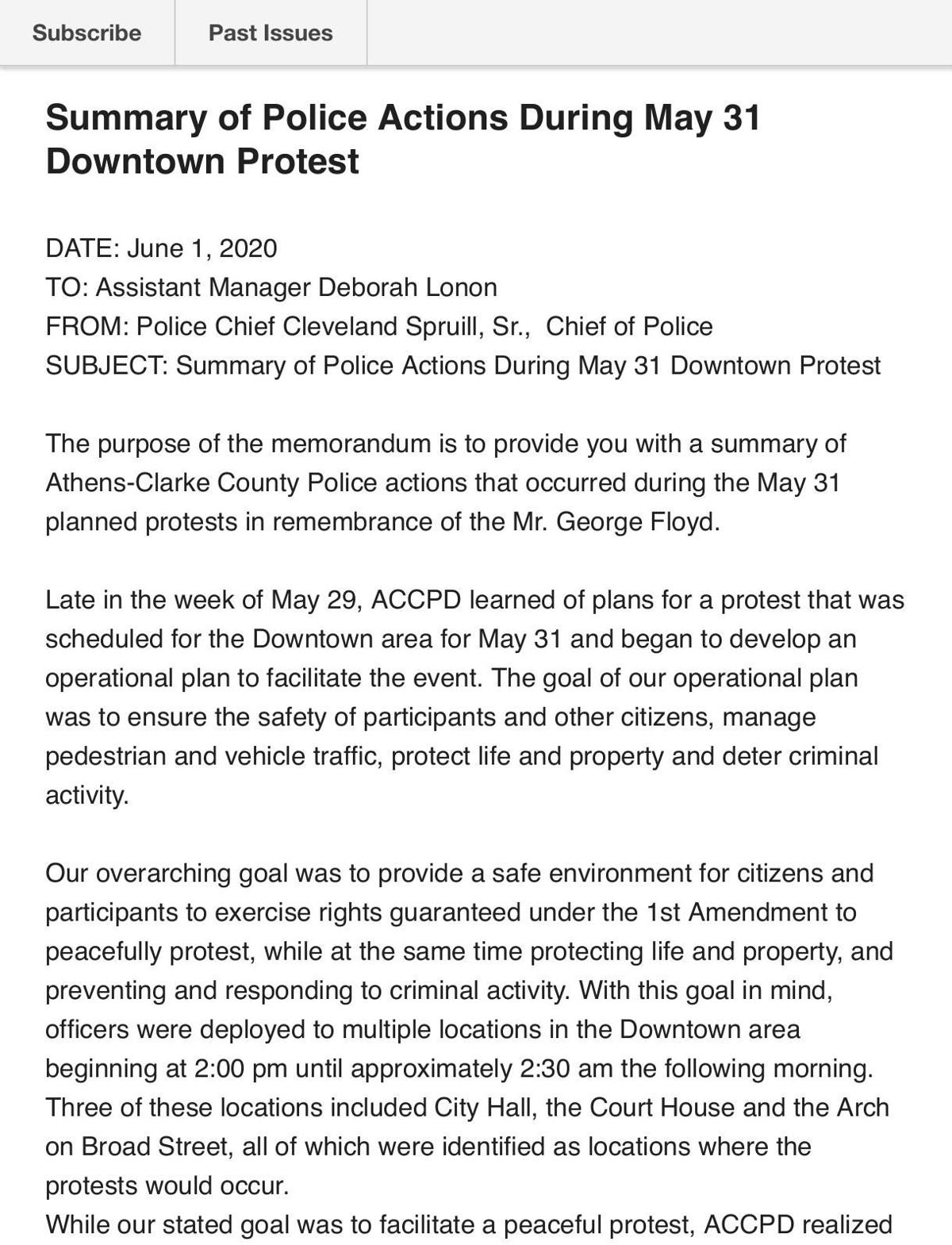 Police use tear gas to disperse Athens protesters at the Arch

Gov. Brian Kemp addressed the protests against police brutality happening across Georgia and their effects on the coronavirus response in a press conference on Tuesday.

GUEST COLUMN: Police, not protestors, have been the true perpetrators of violence

The killing of George Floyd has sparked protests around the country and the world against anti-black racism and police brutality. Police officers' violence against people in these protests has been excessive and is unacceptable.

Local and national streets have seen protests every day this week. Protesters in Athens have taken to the iconic Arch and Broad Street median …

Peaceful protesters assemble downtown for the fourth day in a row

Athens-Clarke County Mayor Kelly Girtz and ACC Police Chief Cleveland Spruill addressed the use of tear gas and police force at the end of Sunday’s protest against police violence in a Thursday YouTube livestream.

Athens Commissioner Mariah Parker plans to stick around for a while

District 2 Athens-Clarke County Commissioner Mariah Parker is running unopposed for reelection. She won the position in a special election in 2018 after longtime Commissioner Harry Sims stepped down to run for mayor.

As Athenians gather downtown to protest police violence, a University of Gerogia public health expert said large gatherings may lead to an increase in COVID-19 cases.

Three protesters describe being hit with sponge and bean bag rounds after a peaceful protest on May 31.

Hundreds of people gathered outside Athens City Hall on Tuesday to protest and speak at the public input meeting for the county fiscal year 2021 budget proposal.