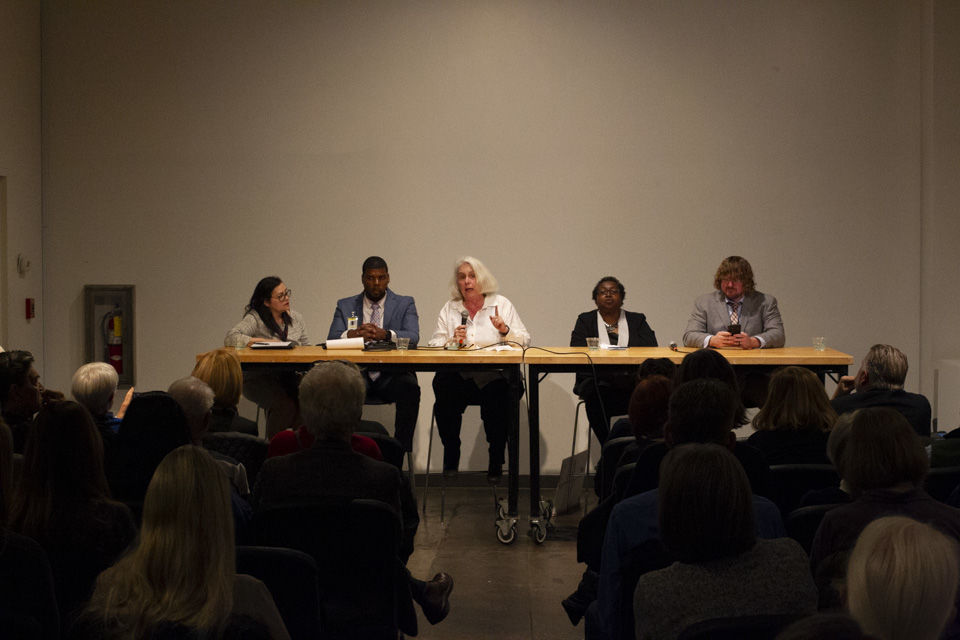 On Jan. 28, the Athens American Constitution Society Lawyer Chapter hosted a panel to discuss voting in Georgia and screened “Suppressed: The Fight to Vote,” a documentary about voting issues in Georgia’s 2018 gubernatorial election. (Foster Steinbeck/Staff) 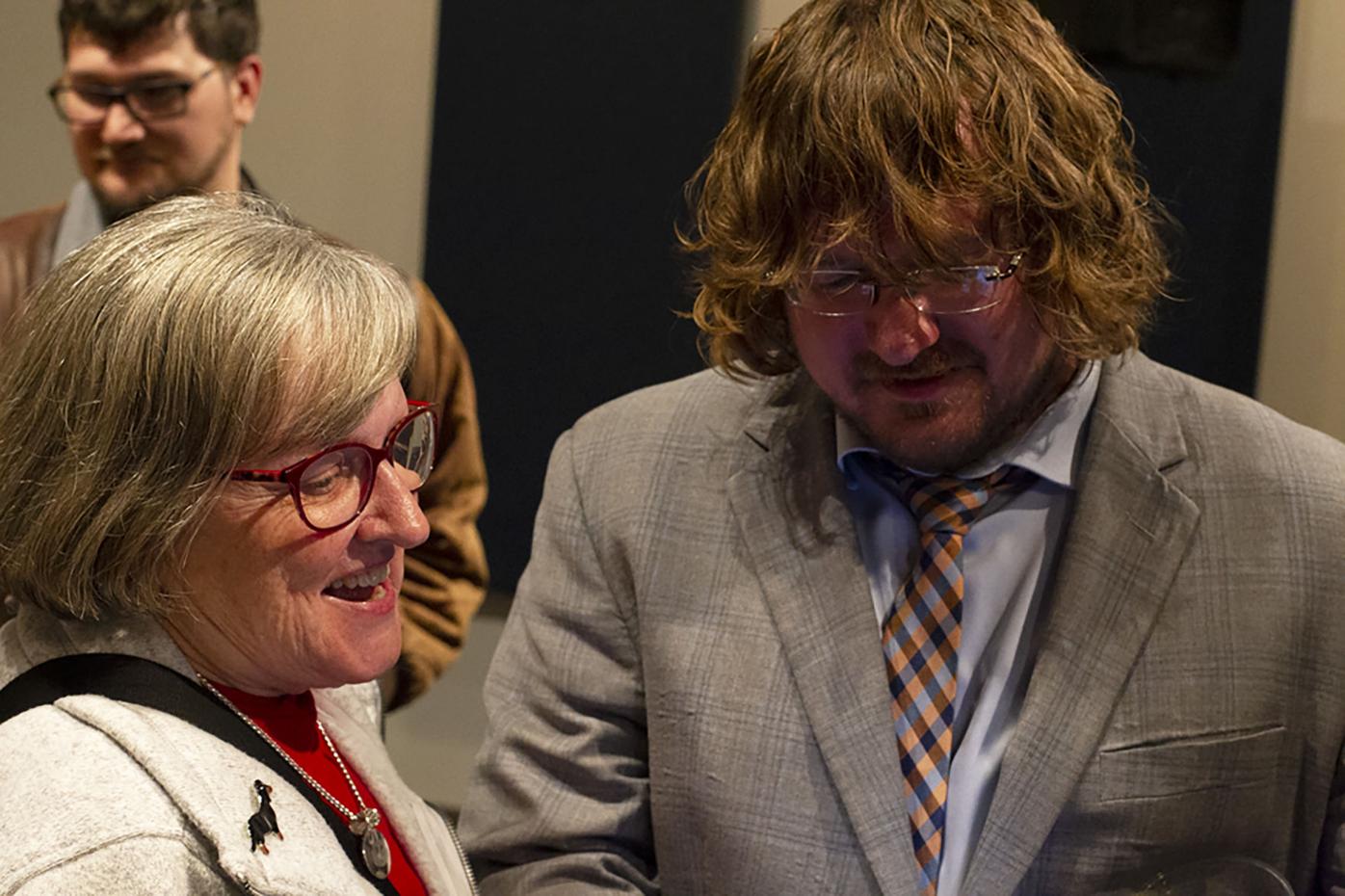 Athens-Clarke County Board of Elections chairman Jesse Evans speaks with an audience member after the event on Jan. 28 at Ciné Lab. (Foster Steinbeck/Staff)

On Jan. 28, the Athens American Constitution Society Lawyer Chapter hosted a panel to discuss voting in Georgia and screened “Suppressed: The Fight to Vote,” a documentary about voting issues in Georgia’s 2018 gubernatorial election. (Foster Steinbeck/Staff)

Athens-Clarke County Board of Elections chairman Jesse Evans speaks with an audience member after the event on Jan. 28 at Ciné Lab. (Foster Steinbeck/Staff)

When he first moved from being a member to leading the board on Jan. 21, Athens-Clarke County Board of Elections Chairman Jesse Evans was surprised to learn only two of Athens’ 20 polling locations had enough electrical infrastructure to power each of the state’s new Dominion voting machines. Voters will first use the new machines in the upcoming presidential primary on March 24.

“I am frustrated because we are very close to the elections,” Evans said. “If we don’t have the electrical capacity for these machines, I don’t understand how we’re going to be expected to utilize those machines.”

Evans spoke as a panelist to an audience gathered inside Ciné Lab on Jan. 28, as the Athens American Constitution Society Lawyer Chapter hosted a panel to discuss voting in Georgia and screened “Suppressed: The Fight to Vote,” a documentary about voting issues in Georgia’s 2018 gubernatorial election.

Evans said he and Board of Elections members Mokah-Jasmine Johnson — who’s also running for state House District 117 — and Willa J. Fambrough have created a back-up plan — “Plan B” — to use paper ballots to fill voting booths don’t have an electronic voting system and to replace the electronic voting systems if “something goes wrong with the machines.”

“That can be a form of suppression,” Evans said. “Some people can’t wait in long lines. People have physical issues, or they have to work.”

The panel launched their dialogue from the documentary, which highlighted the issues surrounding provisional ballots, student registration, Georgia’s “exact-match” law and long wait-times to vote in Georgia’s 2018 gubernatorial election, citing those problems as examples of voter suppression.

“The explosion of electronics in our elections is creating a national crisis, in confidence and in our reality,” Dufort said.

“[Voter suppression] comes from a long history of what Georgia has been going through. It's only when the people demanded change, and things actually do change,” Bruce said. “I'm just here to tell you that you have the power, and not only that, we're here to help.”

In his closing statement, Evans called for an audit of the Board of Elections, as well as urging people to come to the Board’s meetings and to volunteer as poll workers in the upcoming election.

“For better or for worse, I’m an optimist,” Evans said. “We’re going to do well. We’re going to continue fighting and doing what we need to do to make these elections serve the people.”

Correction: A previous version of this article incorrectly stated that Cedar Shoals High School is an early voting location this year. The Red & Black regrets this error, and it has since been fixed.

Clarification: A previous version of this article did not clearly state Jesse Evans has been on the ACC Board of Elections for multiple years and misrepresented Evans' view of early voting locations. The Red & Black regrets this, and the article has since been clarified.

Athens-Clarke County assistant attorney Sherrie Hines sought feedback on a proposal for a pilot program for shareable e-scooters and mopeds to the Athens in Motion Commission at a Jan. 28 meeting.

A sewer line broke near the corner of Terrell Drive and Duncan Springs Road on Jan. 26, and permanent repairs are expected to be complete by Tuesday afternoon,Athens-Clarke County Public Information Officer Jeff Montgomery said in an email.

District 10 encompasses 25 counties, including Oconee, and parts of Barrow, Gwinnett and Clarke. It is currently represented by Republican Jody Hice.

A new bill seeking to designate Election Day as a holiday has been proposed in the Georgia General Assembly. Though it's an attractive idea on paper, such a bill could hurt those it's intended to help, and Georgia should focus on other ways to increase turnout.

OPINION: After Iowa struggles, it's time for a ranked-choice national primary

Because of its place at the start of the primary season, Iowa has too much power over our politics. We should instead move to a system in which all states hold their primaries at once and offer ranked-choice voting.

The State Election Board will hold a hearing to determine if the Athens-Clarke County Board of Elections violated state law by switching to paper ballots for the presidential primary.