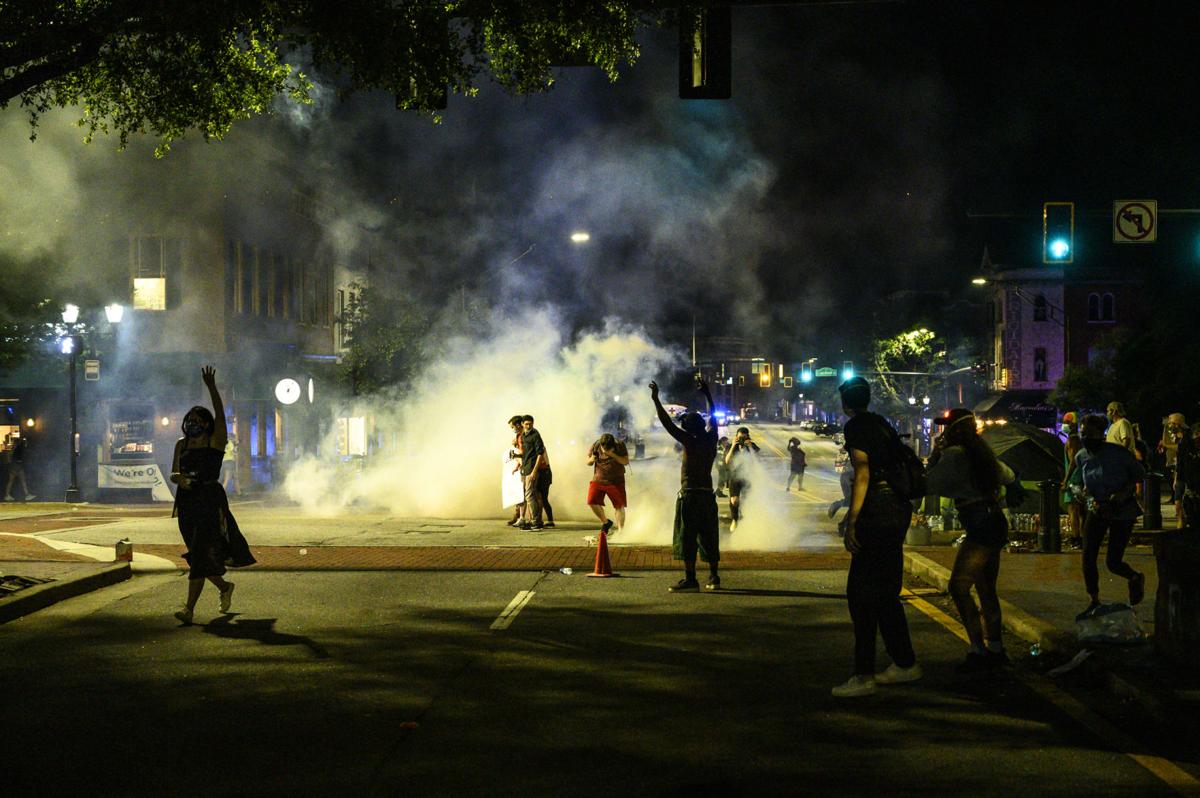 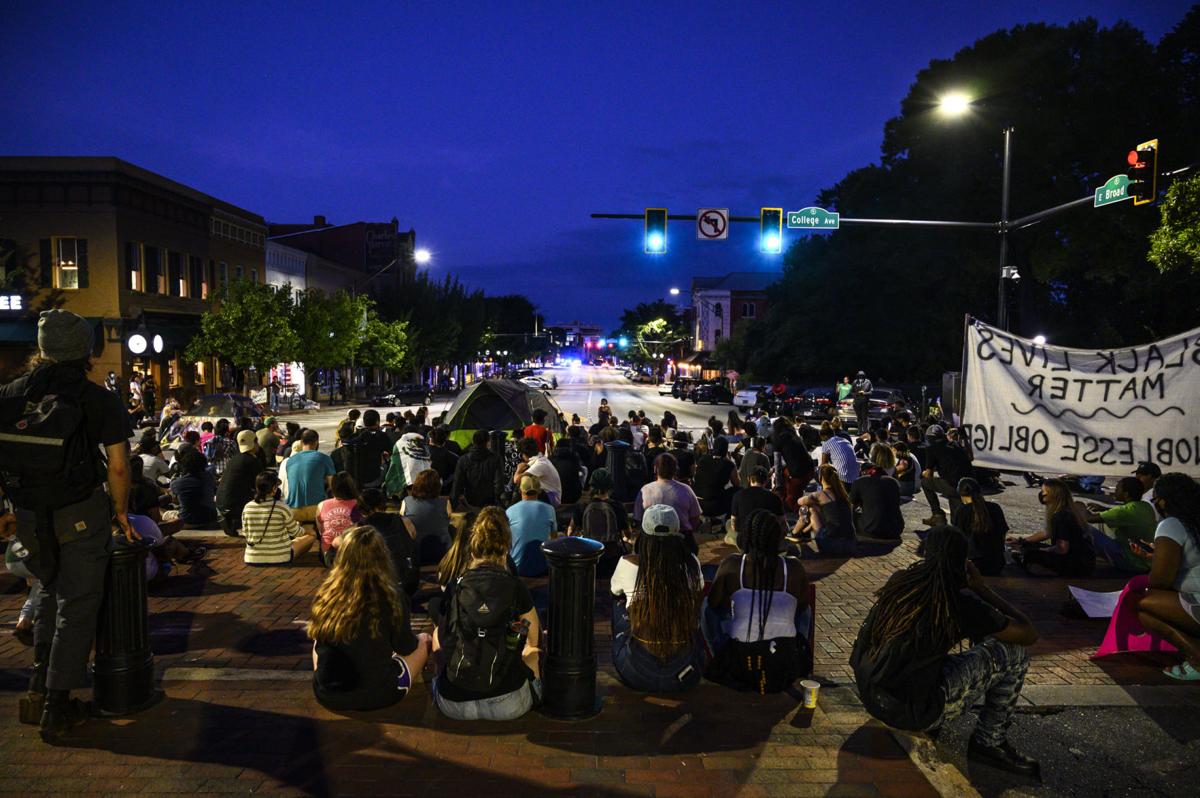 Protestors sit on the sidewalk and road on Broad Street in Athens, Georgia on Sunday, May 31, 2020. Protestors marched around downtown Athens, chanted slogans, shared personal stories and set up two tents. (Photo/Taylor Gerlach) 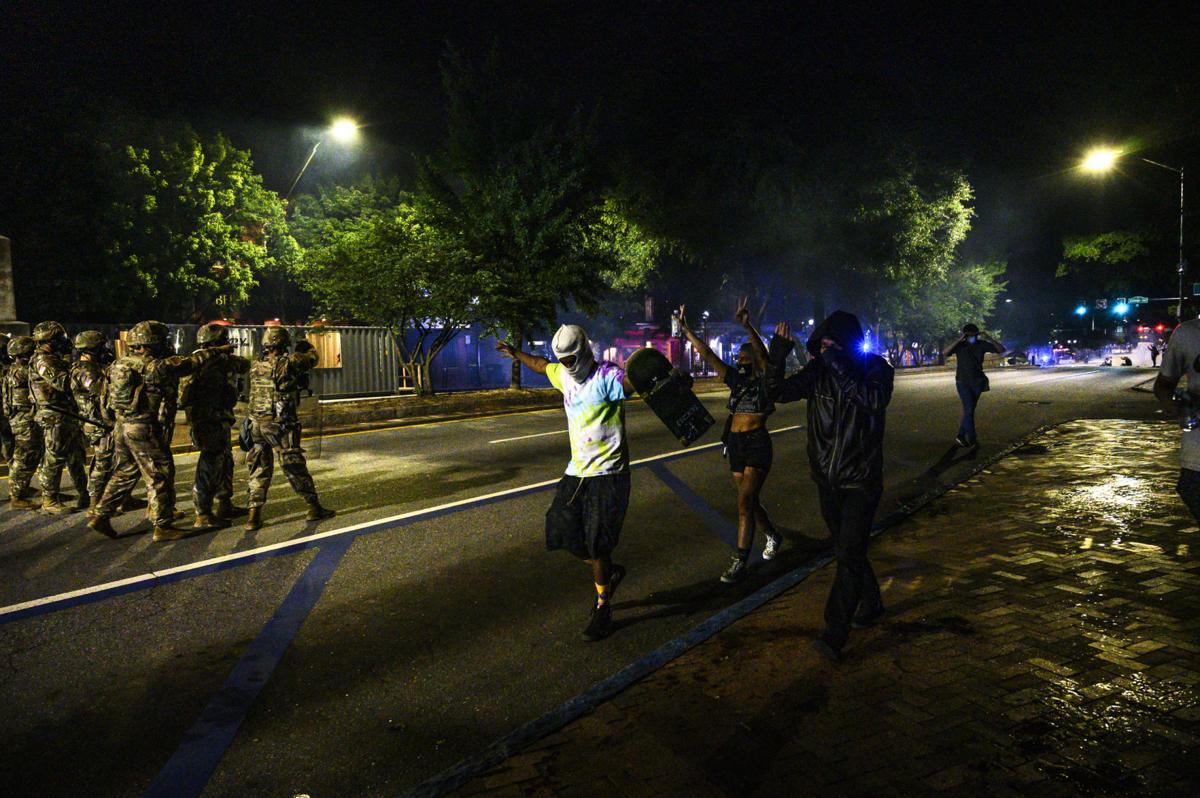 Athens-Clarke County instituted a 9 p.m. curfew around 9:45 p.m. and restricted access to downtown. Roadblocks on Clayton, Lumpkin and Thomas Streets remained from earlier in the evening, and police dressed in riot gear blocked off the entrances to North Campus.

Protesters remained in the intersection of Broad Street and College Avenue. Around midnight, an ACC Police Department drone hovered over the protesters and, citing the curfew, ordered them to disperse.

Now an @accpolice drone is hovering, playing a prerecorded message telling protesters to disperse. Cites the curfew and says “You may be arrested and criminally charged. There is potential that force may be used against you during arrest.” #athens @redandblack pic.twitter.com/Zuo9XgnfBu

“You may be arrested and criminally charged. There is potential that force may be used against you during arrest,” the prerecorded message announced.

While some protesters left the scene, most remained, forming a square in the road, before police advanced down Clayton Street, firing tear gas canisters.

At least six people were arrested after refusing to leave the scene. Most protesters fled the scene.

Before the dispersal, protester Rachelle Berry said she was there to support the remaining protesters with resources such as water, eye wash and access to legal support.

“I am in solidarity with anybody who feels they need to be out here and not leave here until our demands are met. Which is a world without cops,” Berry said. Berry acknowledged that goal would “not be achieved tonight,” but spoke about her support for District 2 Commissioner Mariah Parker’s proposal to reduce ACCPD officer positions by 50%.

The protesters were peaceful and did not damage any property except for spray painting graffiti on the Confederate Monument that stands in the middle of Broad Street.

“There’s no reason for them to remove us. They blocked off the street, there’s no cars coming,” Berry said. “They’re only trying to remove us because they want order, not peace. They don’t want the end of violence, they just want an ordered city.”

Correction: A previous version of this article stated that there was no property damage after protests on Sunday night. The Soldier's Monument on Broad Street was spray painted with graffiti.

Athens-Clarke County under curfew from Sunday night to Monday morning

Athens-Clarke County is under a curfew from 9 p.m. Sunday through 5 a.m. Monday.

University of Georgia President Jere Morehead issued a new statement on the nationwide protests over police violence and the killings of unarmed black people.

‘What if it were me?’: Black UGA students reflect on deaths and protests in their community

As protests against police violence continue across the country, black students at the University of Georgia reflect on the protests and their experiences as black students.

‘Starting conversations’: Rainbow crosswalk to be painted in downtown Athens

Athens will have a rainbow crosswalk painted downtown this year.

‘It’s just surreal’: Athens and UGA communities react to insurrection in the US Capitol

Many in the University of Georgia and Athens communities drew comparisons between the government and police’s response to Wednesday's insurrection at the Capitol and law enforcement's reaction to the Black Lives Matter protests in Athens last summer.