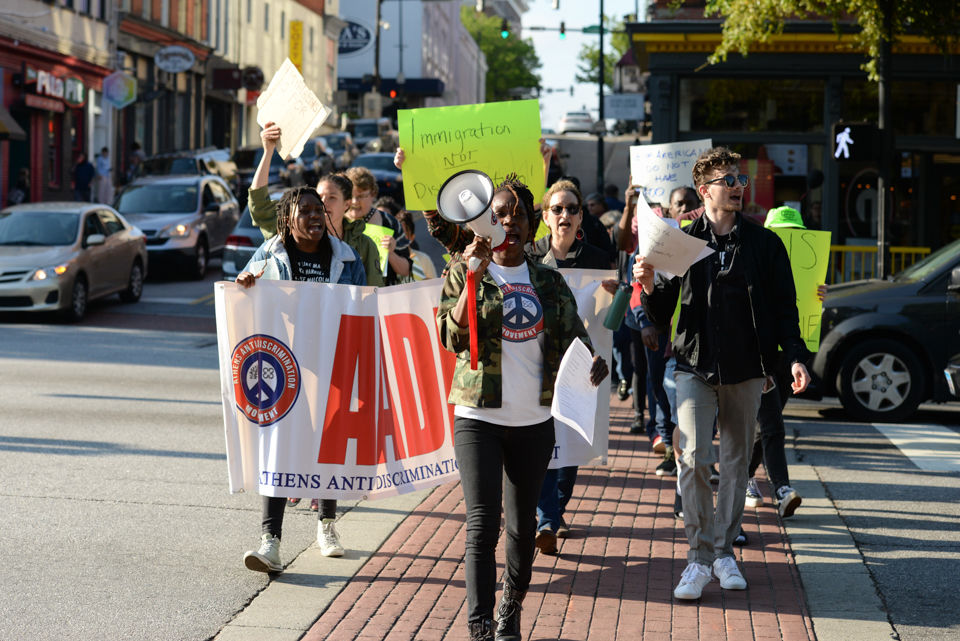 Protesters cross Broad Street at a protest organized by the Athens Anti-Discrimination Movement on Apr. 5, 2019 in downtown Athens, Georgia. The event was organized to protest discrimination and racism in the Athens-Clarke County area. (Photo/Julian Alexander) 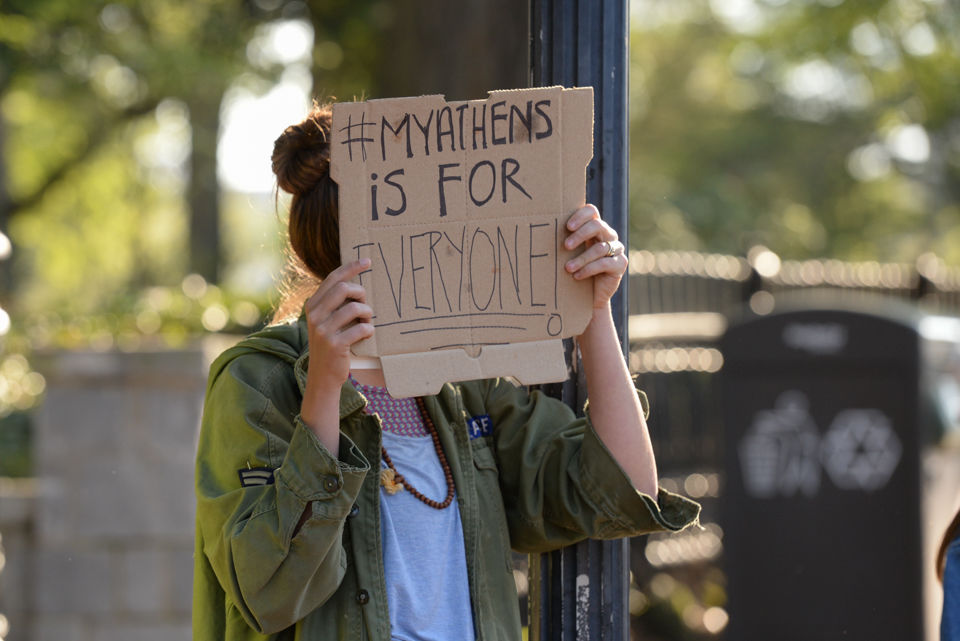 A woman holds up a sign at a protest organized by the Athens Anti-Discrimination Movement on Apr. 5, 2019 in downtown Athens, Georgia. The event was organized to protest discrimination and racism in the Athens-Clarke County area. (Photo/Julian Alexander)

Protesters cross Broad Street at a protest organized by the Athens Anti-Discrimination Movement on Apr. 5, 2019 in downtown Athens, Georgia. The event was organized to protest discrimination and racism in the Athens-Clarke County area. (Photo/Julian Alexander)

A woman holds up a sign at a protest organized by the Athens Anti-Discrimination Movement on Apr. 5, 2019 in downtown Athens, Georgia. The event was organized to protest discrimination and racism in the Athens-Clarke County area. (Photo/Julian Alexander)

A student in a powder blue formal gown from the other side of the street yelled back at her.

As members of Greek life in formal attire shuffled through the crowd to get to the Chapel and graduating seniors in football jerseys impatiently waited to take photos in their place, a crowd of two-dozen protestors gathered in front of the University of Georgia Arch on Friday in protest of discrimination complaints against downtown bars.

AADM, Athens For Everyone and the Athens Immigrant Rights Coalition coordinated the march in response to a surge in reports of discrimination at bars downtown, particularly for Hedges On Broad, Johnson said.

One of the primary goals of the march was to bring attention to the alcohol-licensing ordinance passed by Athens Clarke-County commissioners in 2016, which created a formal filing process for discrimination complaints against bars, Johnson said.

Although filing a discrimination complaint can potentially result in penalties for the accused bars, including civil fines or the suspension or revocation of their liquor licenses, the filing process is underutilized and largely unknown by the community, Johnson said.

Only two complaints have been filed with the ACC Attorney’s Office since the commissioners passed the ordinance in 2016, according to ACC Public Information Officer Jeff Montgomery.

The protest began in front of ACC City Hall and shortly thereafter moved to Hedges On Broad, where the crowd stalled in front of the bar responsible for upwards of 50 complaints made to AADM. The bouncer at the door looked at the marchers and smiled.

The march then reached the Arch, where protesters gathered to hear speakers address the crowd.

Three guest speakers slated to share their stories canceled at the last minute, leaving only Tranteegus Allen, the founder of the Desflo Foundation, a support group for at-risk youth, and her two children to share their experiences with discrimination after moving from Atlanta to Athens.

Beto Cacao, the manager of the Dignidad Inmigrante En Athens and Annika Karlsen, a graduate research assistant at UGA, were also present and spoke.

Tim Denson, ACC commissioner for District 5 and former Athens for Everyone president, encouraged the crowd to call their legislators and city commissioners to develop and enact enforceable civil rights legislation.

“Georgia doesn’t give a damn,” Denson said. “But Athens can.”

The march was continuously interrupted by UGA students dressed in formal attire, who danced to the protestors’ chants and blew out vape smoke as they walked through the crowd. At one point, a student whipped out his phone, recorded the crowd and panned the video to the girl standing next to him, who shrugged and made a face.

Reacting to the students, Johnson noted: “What happened to manners? This is the privilege they have in this town. They want to stand around? Okay, well discrimination will bite you in the ass one day.”

Barbara Benson, a professor of education at Piedmont College, joined the protest as a way to take part in the betterment and unification of Athens.

“When the ordinance was first implemented, the bars definitely adhered to the rules, but that was a couple of years ago, so it’s kind of out of sight, out of mind,” Benson said. “Athens can be a better place if we were able to improve the climate of downtown Athens, but the community can’t be united together in a positive attitude when these actions keep happening.”

The march is the second tier in the AADM’s Five Days of Action initiative, which is designed to raise awareness for criminal justice and racial discrimination issues in Athens and provide citizens with multiple opportunities for involvement, Johnson said.

“People will ask us why are we marching? Why do we care about downtown?” Johnson closed. “Because this is our town.”

Catch up with News and Brews, our news podcast where we talk about the weeks biggest Athens and University of Georgia news.

A nine-member panelist of organization leaders started the event by sharing information on what services exist for immigrants. The conversation revolved around education, community support, health, policy and how people can get involved.

Once someone gets out of prison, they should be able to immediate participate in the next election, not be encumbered with parole payments and other restrictions.

The school with the #1 mascot in college football history no longer ranks on the Princeton Review's top party schools list.

Mokah Jasmine Johnson plans to officially announce her bid for the Georgia House of Representatives during a rally at Athens-Clarke County City Hall on Jan. 18 at 5 p.m., according to a Jan. 2 press release.