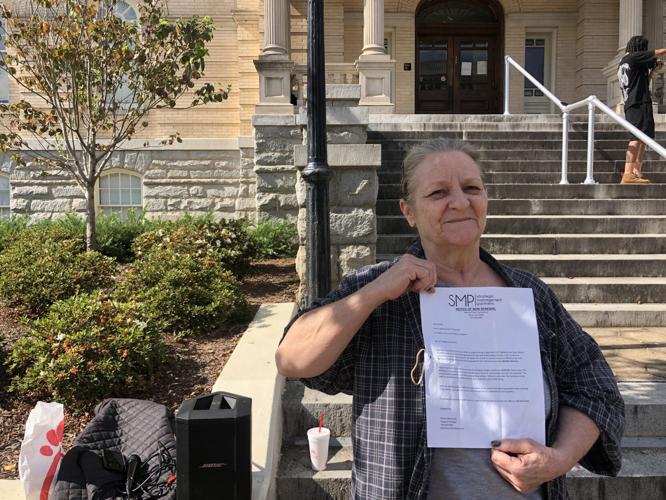 Kathryn Titus holds a letter from her landlord in front of City Hall on Monday, Oct. 17, 2022. Titus’ lease was not renewed; the only reason the letter gave was “business decision.” (Photo/Jacqueline GaNun) 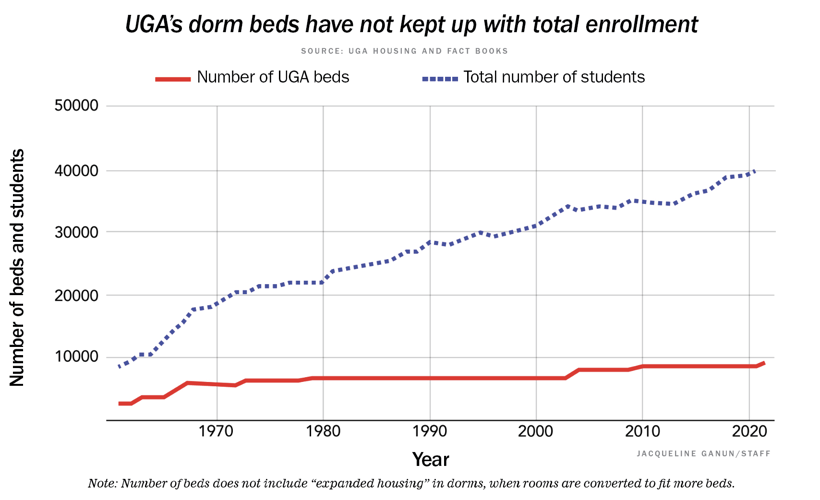 University of Georgia dorm beds have not kept up with the growth of its student population. Athens Mayor Kelly Girtz said privately-owned apartment buildings have kept up with university enrollment and fill the gap. (Graphic/Jacqueline GaNun)

Editor’s note: This story is part two of a three-part series on the housing crisis in Athens. The series explores who is impacted, how the crisis happened and what the community and local government have done to mitigate the impact. Part one can be found here.

Kathryn Titus has been trying to save for a house for her family. She moved into her apartment at Highland Park on Athens’ East Side in 2020 with her daughter and three of her grandchildren. Her daughter saved every paycheck she earned to afford a down payment on a home.

Titus and her family can no longer stay in their apartment. She was told her $1,100-per-month lease wouldn’t be renewed at the end of the year. Even if it was, the complex is now charging $600 more a month for units like hers.

“They have disrupted our lives so severely,” Titus said. She and her family are moving to another county at the end of the year. For now, her dreams of buying a home have been put on hold.

Titus and her family can’t afford to live in Athens-Clarke County and they’re not alone. Properties are becoming increasingly unaffordable and low-income families are trapped in a state of uncertainty.

Activists say the unaffordability is exacerbated by the University of Georgia, where the student population continues to grow, and also by the lack of state or local laws to protect renters. Community members want the university and local government to do more.

Too few homes, too many students

Eight years ago, Broderick Flanigan rented a two-bedroom apartment for less than $600 a month. Today, the average rent for a place that size is just over $1,500. Flanigan is a community activist, and he’s seeing a worrying trend.

“This section of people that are at the bottom of the hierarchy, who are trapped in this low-wage life or low-income situation that they’re constantly being in situations of flux or uncertainty,” Flanigan said.

There isn’t just one reason why it’s harder to buy or rent. Investor purchases, a national housing shortage, a population surge and other factors all contribute. Over the last 20 years, Athens’ population swelled by about 27,000 people. And UGA, one of the things Athens is most known for, is also driving up home prices, community members say.

Since 2018, the number of accepted students has increased each year, and those students need somewhere to live. Housing everyone on campus isn’t an option, since UGA has more than 40,000 students and just over 9,000 beds, according to university spokesperson Greg Trevor. The lack of on-campus housing has opened up the opportunity for the construction of high-rise apartment complexes, particularly concentrated downtown.

“Being here for 12 years, I’ve seen so much development. So much has changed in that short period of time,” said Mokah Jasmine Johnson, who recently ran for state House seat 120. “It’s being driven by the college students.”

UGA has offered upperclassmen living on campus up to $3,500 to cancel their housing contracts and live off-campus to open up rooms for freshmen, who are required to live in dorms unless they’re granted an exemption.

“We’re giving them time to find somewhere else to go, but the truth is that in Athens right now there’s no affordable housing.”

Trevor said the university is “studying the feasibility of adding more on-campus housing in the future.”

Athens Mayor Kelly Girtz said apartment complexes have kept up with student growth and fewer students are renting houses that could be bought by Athenians.

“You go back to 2000, 2002, there was a lot of angst in this community about students renting in neighborhoods,” Girtz said. “It’s not like that’s completely gone away, but it’s much … lighter than it was 20 years ago.”

As the university grows, Girtz wants the supply of housing to outpace demand so fewer students end up in neighborhoods.

Flanigan doesn’t fault students for needing housing but said UGA doesn’t do enough to mitigate what he thinks is a harmful impact on Athens locals. The university is not required to pay taxes on its more than 4,000 acres of land in Clarke County. Flanigan suggested UGA pay into a fund to alleviate the housing crisis in lieu of taxes.

Girtz isn’t optimistic about that.

“As much as I would say that would be a great idea, I know that’s not going to happen,” Girtz said. “But at least we’re generating a lot of tax revenue from places like The Mark and The Standard,” which are privately-owned, off-campus apartment complexes.

Johnson and Flanigan said UGA’s staff wages keep residents who work for the university in cyclical poverty. UGA is one of the largest employers in the county with around 10,400 people on full-time staff and faculty as of fall 2021. Johnson said the university providing jobs is beneficial but the $15.14-per-hour minimum staff wage isn’t enough. Trevor said staff receive benefits that can equal up to an additional 80% of their base salary, which is $31,500 a year.

In 2021, UGA saw its largest ever enrollment and in 2022, largest freshman class. As the number of admitted students inches upward every year, developers rush to build more housing, but many are more interested in attracting students than locals. Only 40% of housing in Clarke County is owner-occupied, according to U.S. Census data.

Barbara Daniel is struggling to find a place to live after a new management company bought her apartment complex. She moved in with a friend at the end of August.

In October, Daniel contacted The Ark, a nonprofit that provides financial assistance to low-income people. Daniel sought funding to pay for a storage unit and help with the bills of the person she’s staying with. She said as of Nov. 6, she hadn’t gotten any.

Girtz said rental assistance funding from the government is routed through state agencies and nonprofits. Johnson said the process of getting aid needs to be streamlined.

“People shouldn’t be homeless because of paperwork,” Johnson said.

Terrell Moore, a program coordinator at The Ark, said getting government funding took longer than anticipated, delaying how quickly it was available. The Ark is effective in giving out aid because of its established procedures, which can be a source of frustration for those who need immediate assistance.

Moore said it’s important people know what they need to bring to qualify, including proof of rent increase and income level. Some that have come to The Ark haven’t qualified for aid.

“It’s really hard to have to tell people who are facing eviction that there’s nothing we can do because of the policies we have in place,” Moore said.

The sheer number of people who need help has also been difficult. The Ark has three staff members and one phone line. Moore said until now, they haven’t needed more than one, and the influx is concerning. She’s scared of what the future holds.

Georgia is one of 26 states that has a ban on rent control, according to the National Multifamily Housing Council. Once a lease is up, landlords can charge whatever price they think the market will bear. Other states have rent control laws, but Girtz said it’s unlikely to pass in Georgia.

“I think you’d be involved in some magical thinking if you think that the Georgia General Assembly is going to approve rent control,” Girtz said.

Flanigan wants to see more support for the people facing imminent crisis, a number he believes is only going to grow.

“We need to do something as a society, as a community, as a whole and really wrap our arms around these residents that are being affected and try to come up with some sustainable long-term solutions,” Flanigan said. “Right now, I feel like we’re just putting Band-Aids on a bunch of things, and that’s not going to cut it.”

Cassandra Morning, a local nurse, bought her first home in July 2020. Since then, Athens-area home values have risen 36%, making it harder for more people to become homeowners.

OPINION: How politics and elections add to societal anxiety

The understanding of anxiety that has operated in politics has not only been analyzed as a psychological condition, but it has also had a lasting presence in the philosophical domain as well.

Jacqueline GaNun was the editor-in-chief of The Red & Black in fall 2021. She studies journalism, international affairs and French at the University of Georgia. She has held multiple roles on the news desk, including news editor and COVID-19 reporter.