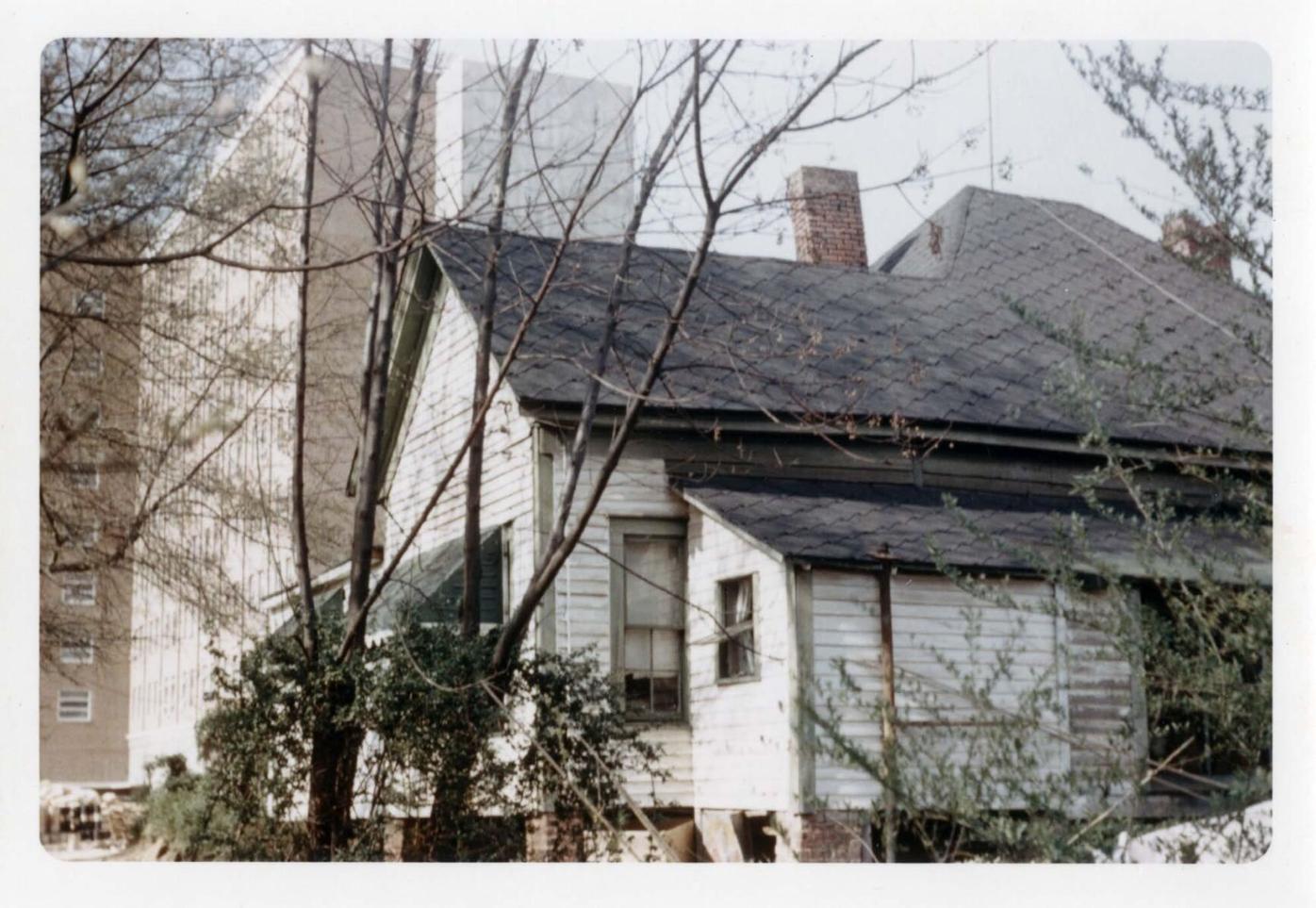 A Linnentown house, with one of the University of Georgia's high-rise dorm buildings behind it. Linnentown was removed during urban renewal in the 1960s to make way for UGA's Russell Hall, Creswell Hall and Brumby Hall. (Courtesy/Special Collections Libraries) 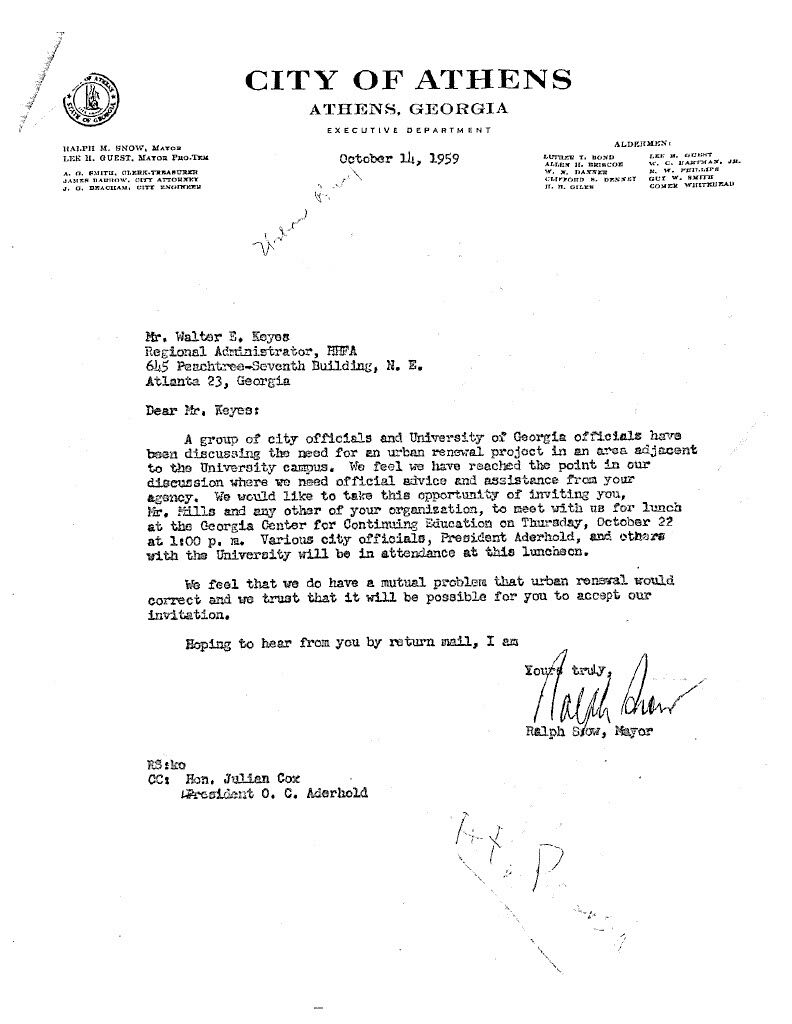 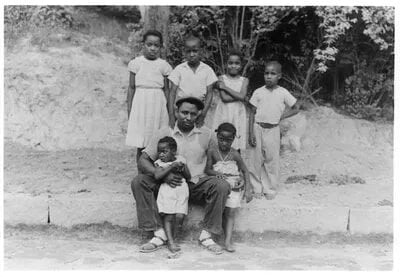 She lived in the Black Athens community for the first 14 years of her life after her birth in 1948. A fourth generation resident, Thomas Whitehead spent her days playing softball, jump rope and jackstones with her six siblings and neighborhood friends.

The children knew to keep to themselves. A fence separated their neighborhood from the white neighborhood, a reminder that they weren’t welcome. Drivers sped up when Thomas Whitehead and her friends crossed Baxter Street on their way to the local grocery store. Students at the University of Georgia threw water bottles and called the children names.

UGA’s campus was so close that fans of the university’s football team would park in front of the residents’ houses on gamedays. Make sure nothing happens to those cars, Thomas Whitehead’s parents would say. They didn’t want any trouble.

Trouble came regardless in 1962, when UGA and Athens used eminent domain laws to displace her family from their seven-room home as part of an urban renewal project. Eminent domain laws allow a government to seize private property as long as it provides monetary compensation to the owner.

Almost 60 years later, Thomas Whitehead is one of several outspoken Linnentown residents seeking “recognition and redress.” For decades, knowledge of Linnentown was essentially limited to the former residents. The story of increasing awareness starts with Joseph Carter, an employee for UGA Libraries, who presented Thomas Whitehead with data he found in his research in 2019.

“It brought tears to my eyes. It brought negative memories to my mind that had been blocked out,” Thomas Whitehead said. “Once I saw that, I knew I had to get involved. Because I knew everything that had been done was wrong.”

All Carter wanted was an example.

He was researching how wage suppression and high rent prices in Athens relate to each other on behalf of a United Campus Workers of Georgia campaign. He figured it would be more compelling if he could mention a specific community.

Carter gave Athens-Clarke County Commissioner Melissa Link a call. Link said she heard rumblings of an old community at the location of the UGA high-rise dorms but didn’t know any specifics.

Link had a friend of a friend, Geneva Johnson, who lived in the community. Johnson currently lives in one of only three surviving houses from Linnentown, Carter said. Her father, Davis Johnson, physically moved a house from the neighborhood to East Broad Street.

“They are some of the bravest people I’ve ever met,” Carter said. “Their tenacity to fight against injustice goes all the way back to when they were kids living in Linnentown. …  Teaming up with them, [I’ve seen] how profoundly unafraid they are to stand up for what they believe they deserve.”

Thomas Whitehead’s speech at the Lyndon House Arts Center on Sept. 12, 2019, started the campaign for public awareness, known as The Linnentown Project. Johnson’s 2013 interview with UGA’s Richard B. Russell Library was the only other time either resident had spoken about Linnentown publicly.

Initial discussions with UGA were fruitless, Carter said. The Linnentown Project, established by former residents and Carter, turned its attention to the Athens-Clarke County Mayor and Commission. The city of Athens had worked with UGA in removing Linnentown.

Residents issued several reparational demands, including financial compensation and a wall of recognition. Supporters of the project packed a February Commission meeting holding signs in support of redress.

In a Jan. 9 statement, UGA said it respectfully disagrees with the conclusions of the project.

By the mid-1960s, the oldest of the baby boomers — generally defined as those born between 1946 and 1964 — had grown up and were ready to attend college.

Universities needed more land to accommodate the influx of students. At UGA, the acquisition of Linnentown and the completion of Creswell, Brumby and Russell Halls in 1963, ‘66 and ‘67 couldn’t have come at a better time.

The university’s enrollment was essentially stagnant in the 1950s. But between 1960 and 1969, it skyrocketed. The student population tripled from about 7,500 to over 22,500, according to the UGA Fact Book.

UGA was far from the only university to acquire property in the name of expansion.

The University of Chicago played an active role in displacing over 4,000 families from the Hyde Park area during the 1950s and 60s. Further south, an expansion of the University of South Carolina forced an estimated 175 families to move, according to University of Richmond’s “Renewing Inequality” project.

Universities and cities took advantage of the Housing Act of 1949, which authorized federal loans to local governments for the removal of “slum areas.” Urban renewal was just one part of a decades-long discriminatory housing policy on the federal level, according to Richard Rothstein’s 2017 book “The Color of Law.”

“Racial segregation in housing was not merely a project of southerners in the former slaveholding Confederacy,” Rothstein wrote. “It was a nationwide project of the federal government in the twentieth century, designed and implemented by its most liberal leaders.”

Urban renewal projects displaced 298 Athens families, including 176 families of color, according to the “Renewing Inequality” project.

In addition to Linnentown, Athens city leaders used eminent domain laws to acquire the homes of 233 families in an area called The Bottom. That area, where emancipated slaves settled in the 19th century, included parts of College Avenue along the North Oconee River, according to Flagpole.

Where the resolution stands

Thomas Whitehead was involved in civil rights from a young age.  Her family’s move from Linnentown to public housing continued to inspire her.

While participating in civil rights demonstrations downtown, she said police sometimes put her in jail. Decades later, she still leads a public life. In 2011, she founded Athens StepUp Scholarship Program, which gives money to high school seniors who overcome obstacles.

Since then, Mayor Kelly Girtz helped form the Athens Justice and Memory Project. The resident-led team will focus on Linnentown’s destruction and serve as a “model process for coming projects,” Girtz said.

Thomas Whitehead led the first meeting of the project. Her activism will rely on data found in research, she said. During the spring 2020 semester, she assisted a class taught by UGA geography professor Jerry Shannon that digitized records and mapped the neighborhood.

“Outside of former residents, five years ago most folks in Athens really had no awareness of the neighborhood or the redevelopment that destroyed it,” Shannon said. “To see it on a map makes it more of a real place that residents can use and point to and say, ‘Here’s where it was.’”

Shannon and his students determined that UGA paid Black homeowners much less money than white homeowners, even after controlling for the size of the house. A majority of Linnentown residents owned their own home, according to the Linnentown Project. Therefore, they missed out on the wealth that would have come with the housing price boom in the second half of the 20th century, Shannon said.

The Red & Black asked individual protesters what motivated them to join the march.

The Davenport-Benham Black Law Student Association of the University of Georgia organized a march on Friday evening with local activist groups such as the Athens Anti-Discrimination Movement, calling for racial and economic justice in Athens and UGA.

The Athens-Clarke County Mayor and Commission passed the fiscal year 2021 budget, voted for the removal of the Confederate monument downtown and discussed a memorial project for the Linnentown neighborhood in a Thursday meeting.

The weather loach, an eel-like invasive species of fish, was discovered in an Athens creek in November 2020. This brings light to the Universi…

The Athens-Clarke County Mayor and Commission discussed the possibility of shortening a proposed contract extension with Axon, the Arizona-based technology company that supplies the ACC Police Department with Tasers and body cameras, in an agenda setting session Tuesday.

Athens mayor signs apology in recognition of Linnentown, county set to vote on resolution for reparations

On Feb. 16, the Athens mayor and commission will vote on a resolution about Linnentown presented by the Athens Justice and Memory Project.

The ACC Mayor and Commission approved the Linnentown Resolution, which provides a pathway for the county to provide redress.

For property management in a college town like Athens, it’s a race to the top. And if rent is going to keep shooting up for UGA students, it better come with the basics.

Various University of Georgia departments have come together to sponsor the 2021 Symposium on Recognition, Reconciliation and Redress this Friday and Saturday, a virtual look back at slavery on campus and the repercussions Athens faces today because of it.

The United Campus Workers of Georgiaa and numerous other local organizations came together to hold a rally at the Arch Friday evening to bring attention to the treatment of campus employees, faculty and staff.

UGA hosted its first Symposium on Recognition, Reconciliation and Redress on Friday and Saturday dedicated to discussing the historical and contemporary impacts of slavery on the university and the city of Athens.

Leaders of The Linnentown Project send letter to Jere Morehead

Hattie Thomas Whitehead, chairperson of The Linnentown Project, wrote a letter to Jere Morehead inviting him to join the Athens-Clarke County Justice and Memory Project Committee and criticizing UGA's past responses to Linnentown.