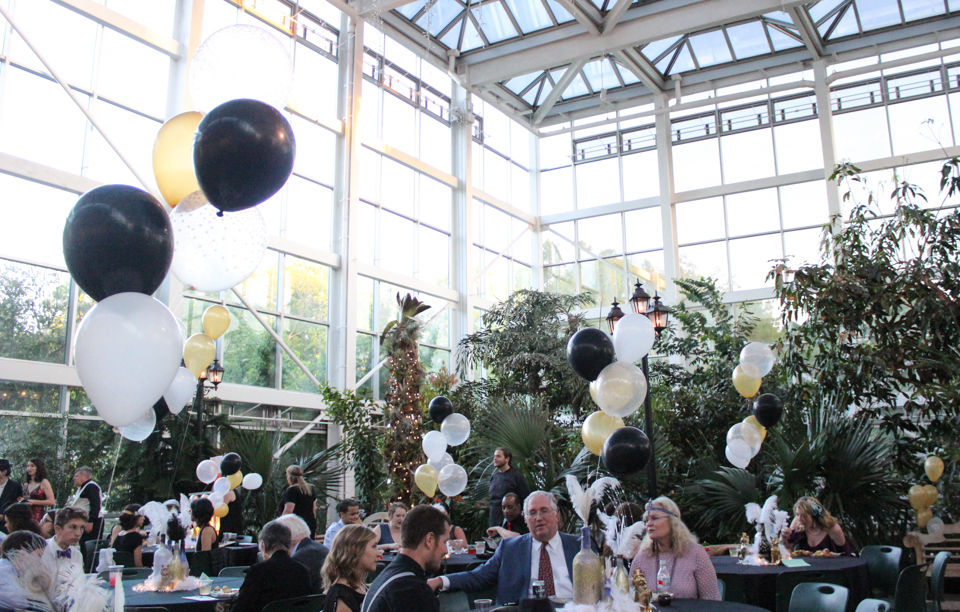 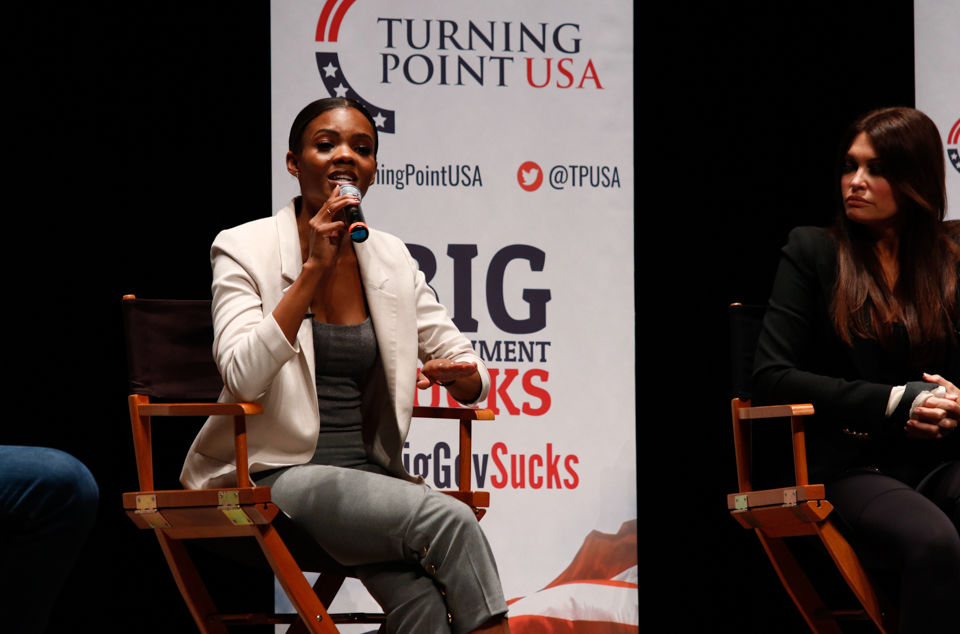 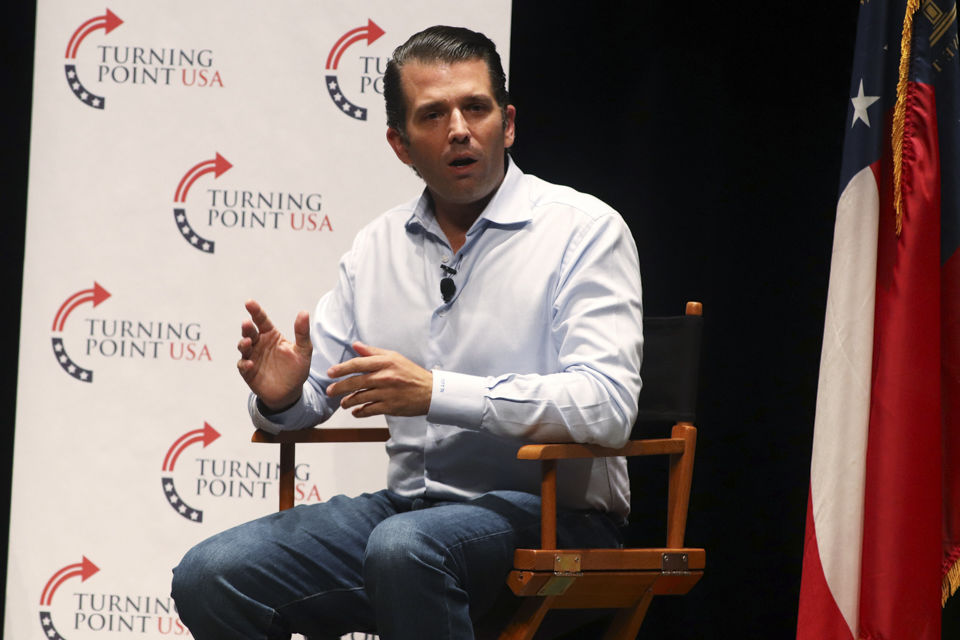 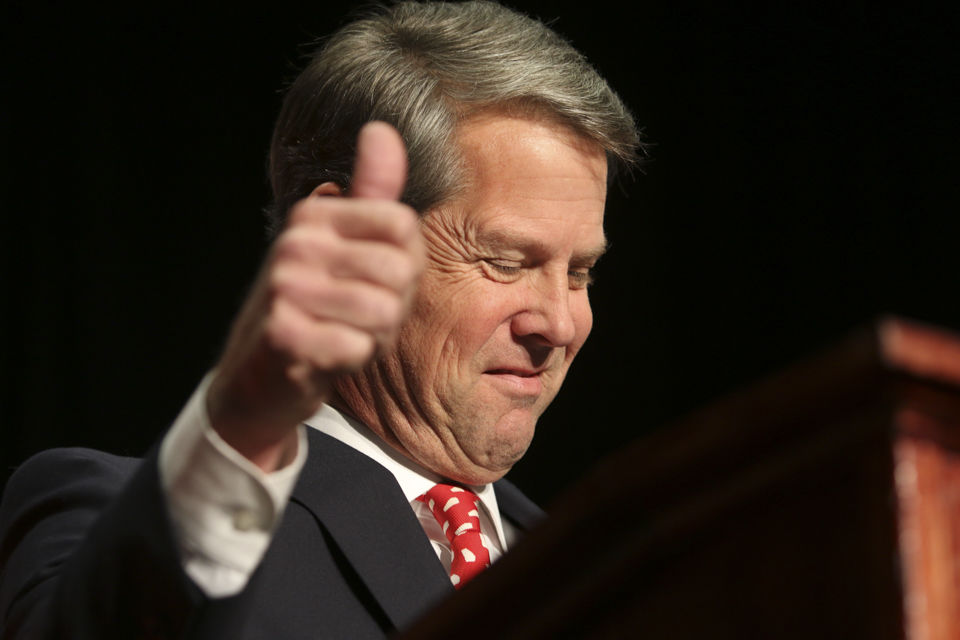 Brian Kemp, Republican candidate for governor of Georgia, delivers a victory speech to a crowd of supporters at the Brian Kemp election night watch party on Wednesday, November 7, 2018, at the Classic Center in Athens, Georgia. The event went into the early hours of Wednesday morning as supporters and candidates alike closely watched the polling numbers. The Kemp Campaign claimed victory at the end of the night despite their opponent’s, democratic candidate Stacy Abrams, decision to not concede, citing alleged voter suppression. (Photo/Christina R. Matacotta, crmatacotta@gmail.com) 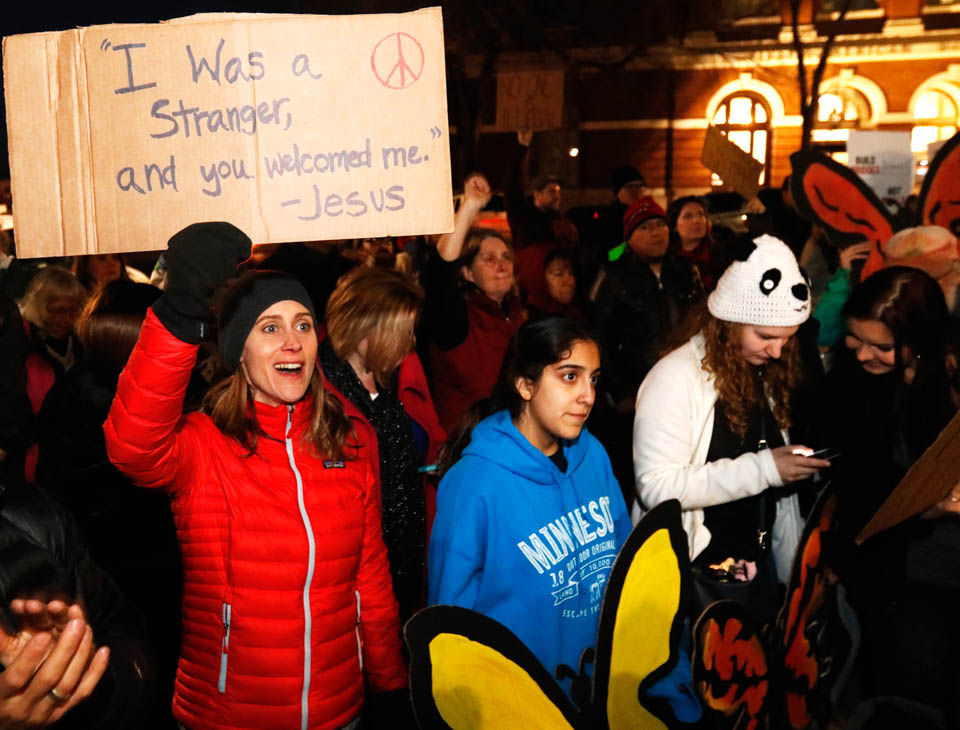 Protesters chant at the "No Mas Mentiras, No Mas Deportaciones" rally, on January 19, 2018, at City Hall, in Athens, Georgia. (Christina R. Matacotta, crmatacotta@gmail.com) 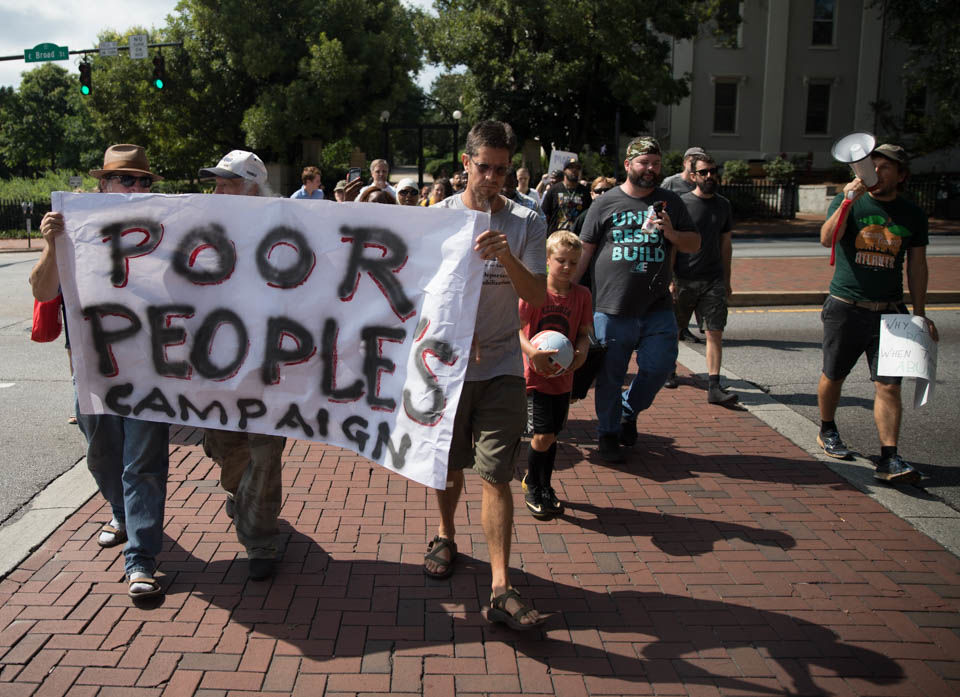 People arrive with signs and ready to march to Cith Hall at the AADM protest held at the arch on Saturday morning, June 23, 2018, in Athens, Georgia. Athens locals in attendance support the Poor Peoples Campaign National Call for Moral Revival Sibling-Rally (Photo/Reynolds Rogers) 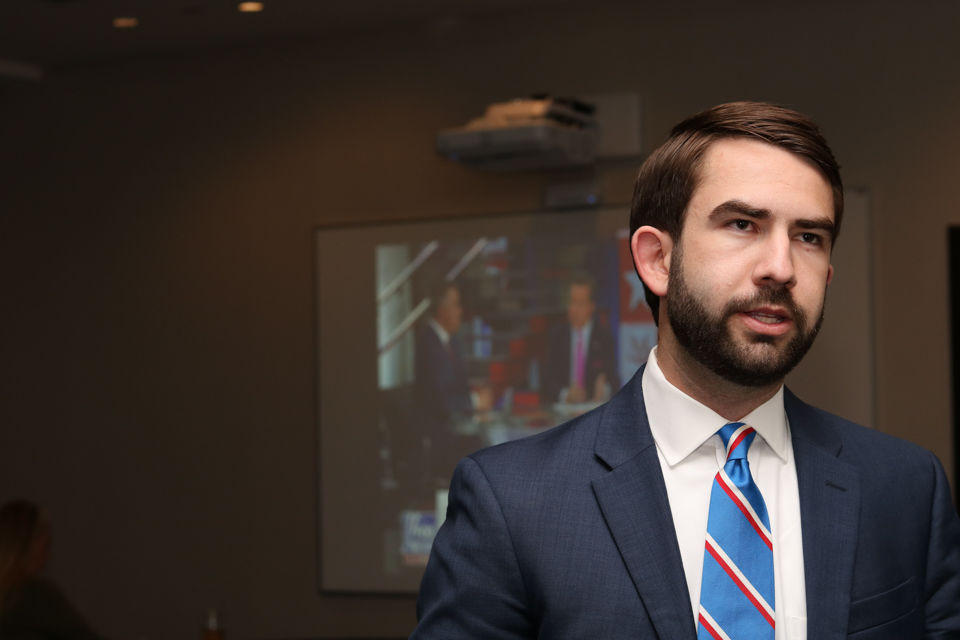 Houston Gaines discusses about his campaign with supporters as the final votes are being counted at his election night party on Tuesday, November 6, 2018 in Athens, Georgia. Gaines is the Republican candidate challenging Democrat Deborah Gonzalez for Georgia’s 117th House district. (Photo/Sidhartha C. Wakade, wakade98@gmail.com).

Another year has come and gone. While 2019 is already making its mark in Athens news with the recent swearing in of a new mayor and commissioners, 2018 was packed with major stories for Athens-Clarke County.

From a police chief resignation to an appearance by Donald Trump Jr., here is a look at the top Athens news stories from 2018.

Community members, local government representatives and religious leaders united on the steps of Athens City Hall on Jan. 19 to protest the Clarke County Sheriff Office’s decision to work with Immigration and Customs Enforcement. Since July of 2017, the Clarke County Sheriff cooperated with ICE by instituting a policy that justifies holding undocumented immigrants for 48 hours past the normal release time, giving ICE time to detain the immigrant for deportation.

University of Georgia medical and pharmacy students hosted a free healthcare event that provided wellness examinations, along with HIV and Hepatitis C testing. The focus of the health fair, which took place Feb. 17, was providing care to lower income communities. The health fair took place at the entrance of the Pinewood Estates North Athens community.

On March 7, Avid Bookshop shut down its annual book fair at Athens Academy due to parent complaints about a featured book that included a gay character. “The Best Man,” the children’s book in question, was written by award-winning author Richard Peck and tells a “story of small-town life, gay marriage and everyday heroes,” according to Avid’s website.

The Athens Area Humane Society hosted a “Great Catsby” fundraiser on April 27 with 1920s themed music and costumes at the State Botanical Garden of Georgia to raise money to purchase a new building.

The World Famous, a local bar and music venue, hosted a benefit on May 10 to raise money for the 18th Hot Corner Food and Music Festival. The event, Town Hall Benefit Bash, hosted local performers and Athens candidates. The candidates were invited to briefly speak on their platforms so that more locals could be informed.

There was great celebration at Athens native Brian Kemp’s watch party for the Republican gubernatorial primary election on the night of July 24. Kemp won with 69 percent of the vote and went on to win the Georgia gubernatorial election in November.

The Varsity restaurant chain turned 90 in August. The Athens location, opened in 1932, was the second to open and was originally located at 101 College Ave., directly across from the Arch.

Athens-Clarke County Police Chief Scott Freeman was asked to resign on Sept. 13 after 12 officers resigned between June 1 and Sept. 13. ACCPD interviews with previous employees revealed their distrust in Freeman following an incident in June when an officer hit a suspect with his patrol car and was subsequently fired.

The “Campus Clash” event held in the Classic Center on Oct. 9 featured Turning Point USA representatives and Donald Trump Jr. It had about 1,500 in attendance, about 75 of whom marched out with their fists raised in protest.

More than 3.9 million votes were cast in Georgia and 43,000 in Athens-Clarke County for the midterm elections this year. Brian Kemp defeated Stacey Abrams with 50.22 percent of the votes. In Athens, both State House District 117 and 119 flipped back red after only a year of democratic control.

Interfaith Sanctuary Coalition and Dignidad Inmigrante en Athens hosted a candlelight vigil near Athens-Clarke County City Hall on Dec. 12. The event was meant to draw attention to separated families at the U.S.-Mexican border, immigrants arrested for driving without a license and those seeking asylum.

As 2019 gets underway, take a look back at the major events at the University of Georgia in 2018. From the election of a new Student Government Association administration to the rise and fall of a grilled cheese empire, here's a month-by-month breakdown of 2018's top events.

The fresh faces of Athens: Get to know the city's new mayor and commissioners

The new crop of ACC commissioners features a more diverse group than in previous years.

Responding officers forced entry to the residence when the woman told dispatchers that the man had a baseball bat.

The Clarke County School District Board of Education met Thursday for its first meeting of the new year.

Cleveland Lee Spruill Sr. will begin his duties as chief of police on Feb. 4.

Brian Kemp will hold his swearing-in ceremony on Georgia Tech’s campus on Jan. 14.

Two women stole 50 items of clothes, a man had his car keyed by the former coworker who stabbed him and a license plate was stolen off a vehicle.

UPDATE: Immigration rights activist Eduardo Samaniego must return to Mexico within the month

As of Feb. 1, Eduardo Samaniego has agreed to voluntarily leave the U.S. and return back to Mexico, a country he left a decade ago. He has a month to leave the U.S.

As 2019 starts off in a political frenzy, University of Georgia students reflect on volunteering for their preferred candidates during the midterm elections.

While Stacey Abrams made history as the first black female to give the official Democratic response to the State of the Union address, Athenians, UGA students and employees gathered around a screen at Hendershot’s Coffee Tuesday to view both Trump’s and Abrams’ speeches.

At a town hall held by Athens-Anti Discrimination Movement, Chief of Police Cleveland Spruill said his vision of the Athens-Clarke County Police Department is a “modern, enlightened, 21st century police department.” This vision includes a diverse organization, a building of trust and highly trained and well-equipped officers.