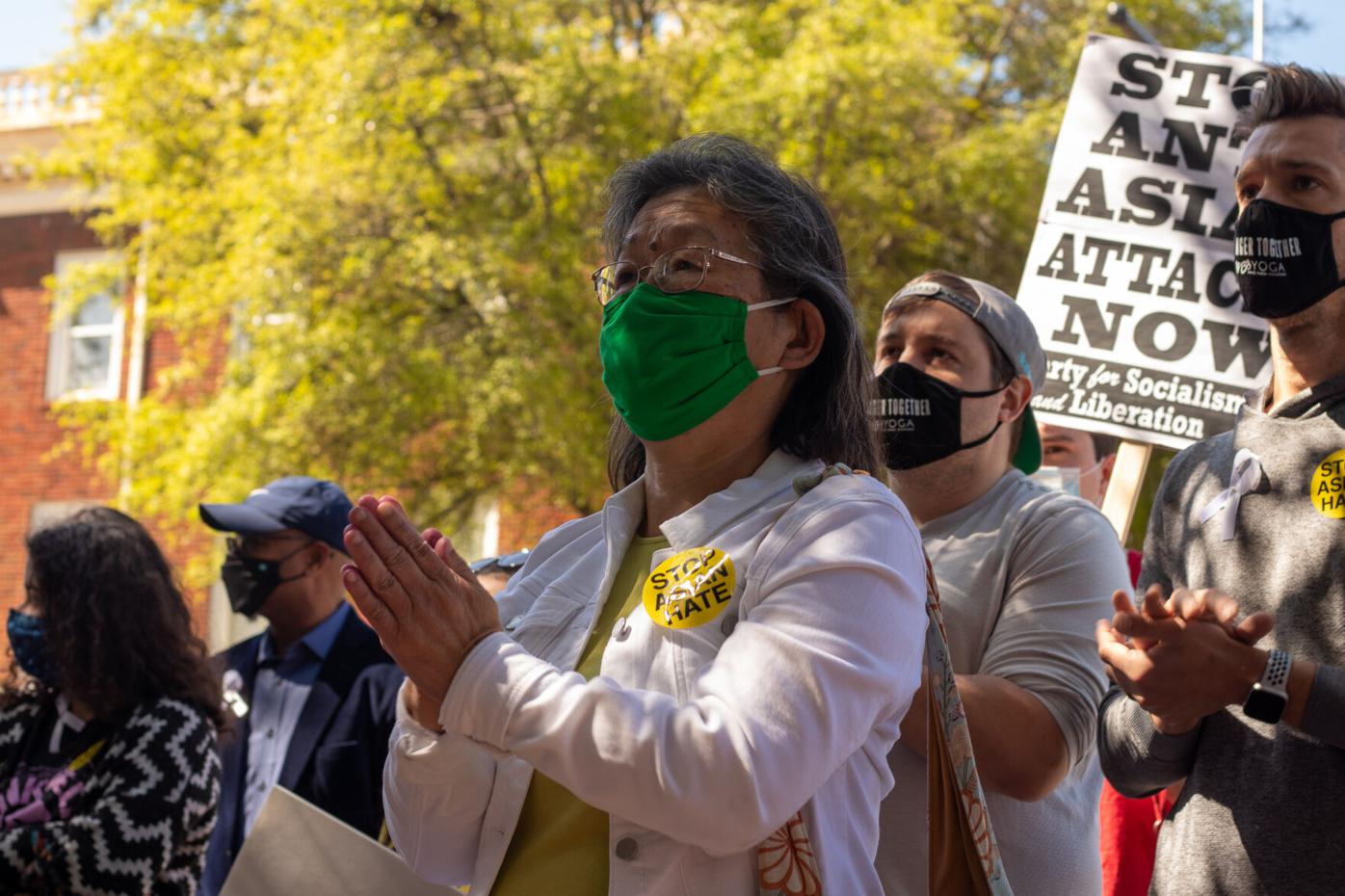 A protester claps during the speeches at the United Against Asian Hate rally in downtown Athens on Saturday, April 3, 2021. The rally was organized by the Athens Anti-Discrimination Movement as a call to the African American, Latinx, Asian and all other marginalized communities and their allies to come together in solidarity. (Photo/Lora Yordanova, lorayphoto@gmail.com) 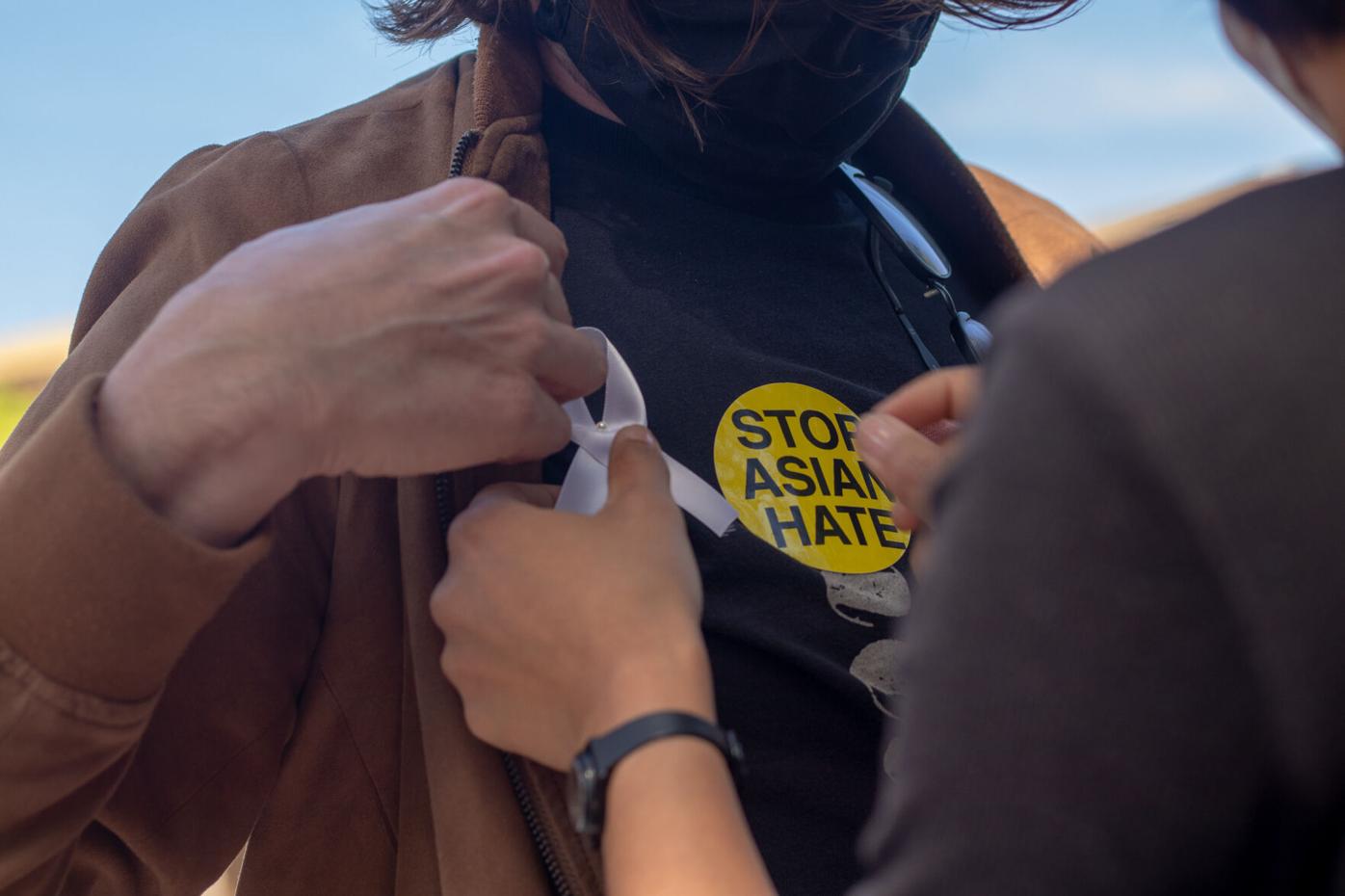 Two friends help each other pin white ribbons to their clothes to show solidarity with the AAPI community at the United Against Asian Hate rally in downtown Athens on Saturday, April 3, 2021. The rally was organized by the Athens Anti-Discrimination Movement as a call to the African American, Latinx, Asian and all other marginalized communities in Athens and their allies to come together in solidarity. (Photo/Lora Yordanova, lorayphoto@gmail.com) 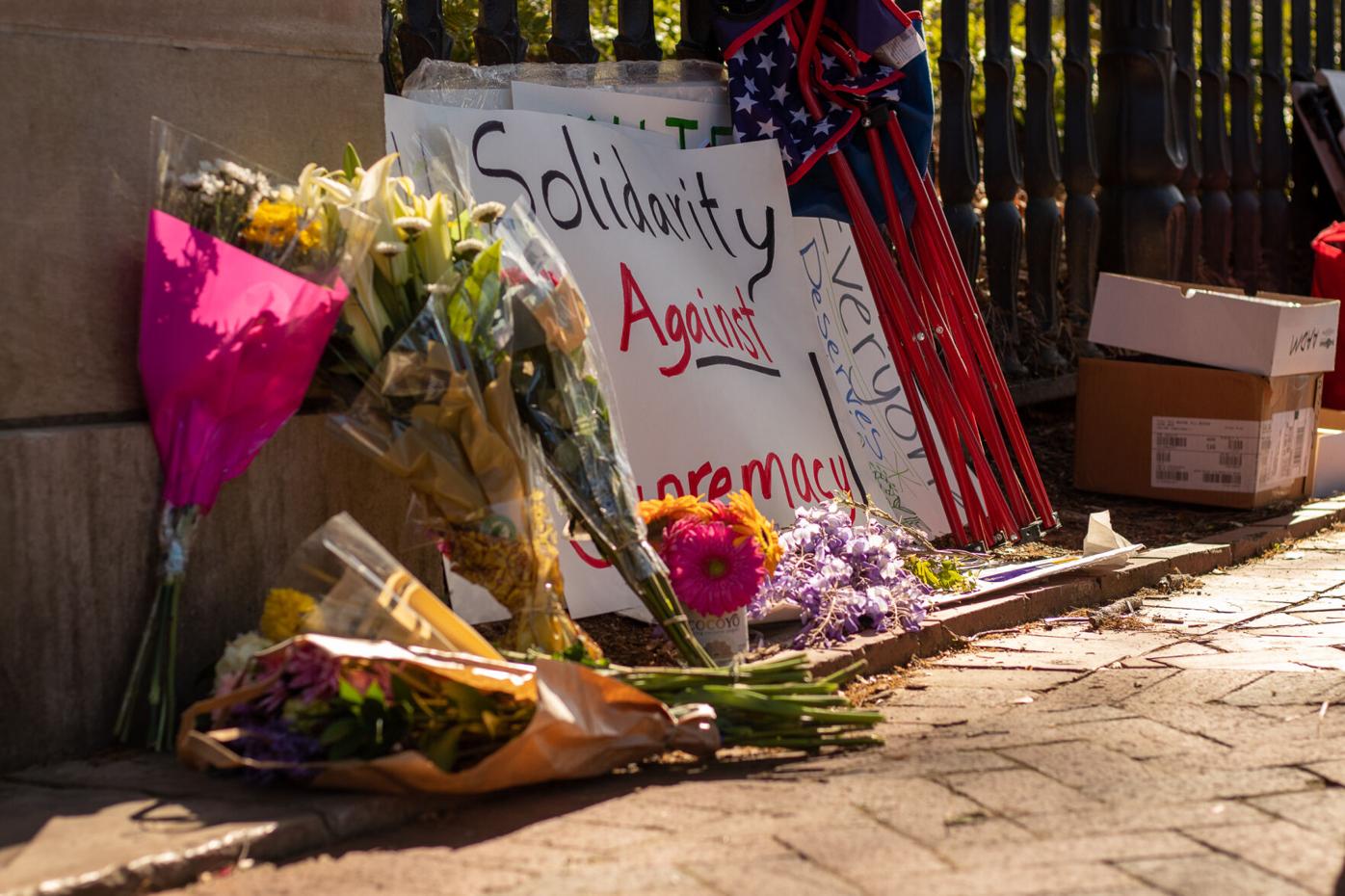 Signs and bouqets of flowers are left by the Arch after the United Against Asian Hate rally in downtown Athens on Saturday, April 3, 2021. The rally was organized by the Athens Anti-Discrimination Movement as a call to the African American, Latinx, Asian and all other marginalized communities and their allies to come together in solidarity. Protesters were encouraged to bring flowers to honor those killed during the Atlanta Spa Shooting. (Photo/Lora Yordanova, lorayphoto@gmail.com)

“No justice, no peace!” roared a crowd of about 100 people who met at the Arch in downtown Athens on Saturday afternoon. The crowd gathered to join in solidarity with the Asian American and Pacific Islander community after the mass shootings in Atlanta that occurred on March 16.

“All throughout Georgia, all throughout this nation, it is time for us to have each other's back,” Johnson said.

Protesters called for unity among minority communities after a year of protests covering the Black Lives Matter movement and the #StopAsianHate movement. Another protest was held in Atlanta on Saturday as a gesture of unity.

Community organizer Long Tran was one of the speakers who came from Atlanta. He began organizing in 1995, 13 years after the 1982 murder of Vincent Chin. The two men who were responsible for the murder were fined $3,000 each and didn’t serve jail time.

Tran highlighted the white privilege involved in Chin’s murder and compared it to the March 16 mass shootings that took place at three spas in Atlanta. As Tran finalized his speech, he reminded the younger audience members to remember the power they hold as voting members of society.

Michelle Kang, Korean American Constituency Director of the Asian American Action Fund of Georgia, is a University of Georgia alumna, and so is one of her daughters. Her other daughter will be attending college this fall, and Kang said she is concerned for her safety.

After Kang’s speech, the crowd marched to City Hall from the Arch. A new set of speakers were introduced. Among them, Chair of the Georgia Advancing Progress Political Action Committee, Cam Ashling.

“We have to vote out racism. If we don't, it will keep coming up. And the people who prop it up will stay in power to use it and pin our communities against each other,” Ashling said.

Ashling said one of the issues in the Atlanta spa shootings was gun control. Robert Aaron Long purchased a gun on the same day he used it to kill eight people, six of whom were Asian women.

With Georgia’s current gun laws, there is no waiting period to purchase a gun and private weapon sellers are not required to do a background check on licensed gun owners.

Emma Jones is the leader for the local Moms Demand Action group that advocates for gun reform. Jones also spoke about the effects of gun violence.

“We know that white supremacy racist and misogyny are a toxic mix, and they turn swiftly deadly when we add guns,” Jones said.

China in the media

Anne Belocura is a member of the Party of Socialism and Liberation who spoke about how the media’s depiction of China affects how Asian-Americans are viewed in society.

She said Trump “weaponized” the virus and didn’t take action which resulted in 400,000 deaths due to COVID-19 under his administration. Since Biden’s inauguration, approximately 155,000 deaths have occurred. Belocura suggested that mainstream media’s coverage of China, while the U.S. government chose not to do anything about COVID-19, led to a rise of Anti-Asian sentiments.

Another issue brought forth by the Atlanta spa mass shooting is the hypersexualization of Asian women.

“It's a form of racism that dehumanizes Black women, Asian women and ultimately, all women. It's the idea that the presence and existence of women is inherently sexual and deviant,” Belocura said.

In an interview after the protest, Tran, Ashling and Kang spoke to The Red & Black about Asian cultural beliefs that need to be fought against. Staying quiet, being respectful and minimizing trouble are “part of our culture,” said Tran, who is Vietnamese.

“Part of the fact that when immigrants come over, they don't want to have another reason for somebody else to target them, and speaking up politically puts another target on you in case somebody wants to hurt you,” Ashling said.

The push for further unity, reform and awareness was heard at the Arch today as community members continue to organize rallies and marches.

Asian American students at UGA reflect on their experiences with racism in light of the Atlanta mass shooting.

A vigil for the lives lost in the Atlanta spa shootings, organized by the University of Georgia Vietnamese Student Association, drew a crowd of roughly 90 students, staff, faculty and community members Tuesday evening.

The Red & Black sat down with Alex English, a prominent voice in the university’s Black community, to discuss racial change and his role as president of the University of Georgia’s chapter of the NAACP.

A group of about 100 demonstrators gathered at Athens City Hall Wednesday in solidarity for Daunte Wright, who was killed by a police officer in Minnesota.

PODCAST: Reflecting on the Atlanta spa shootings, one month later

Sherry Liang and Rachel Priest reflect on the March 16 Atlanta spa shootings, where a white man killed eight people, six of whom were Asian women. Liang and Priest are two of the few Asian editors to work at The Red & Black.