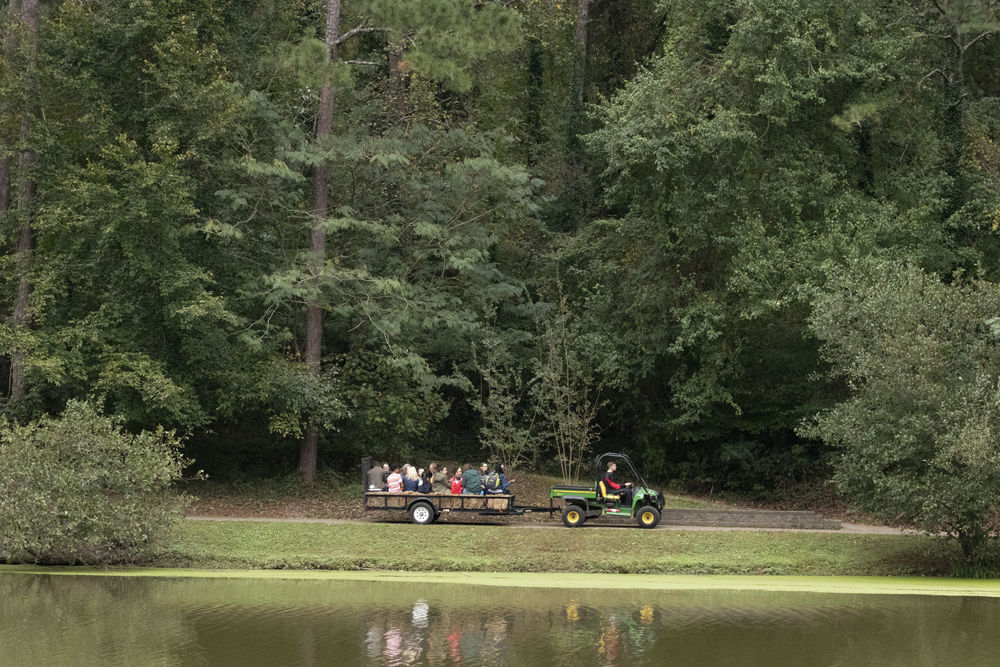 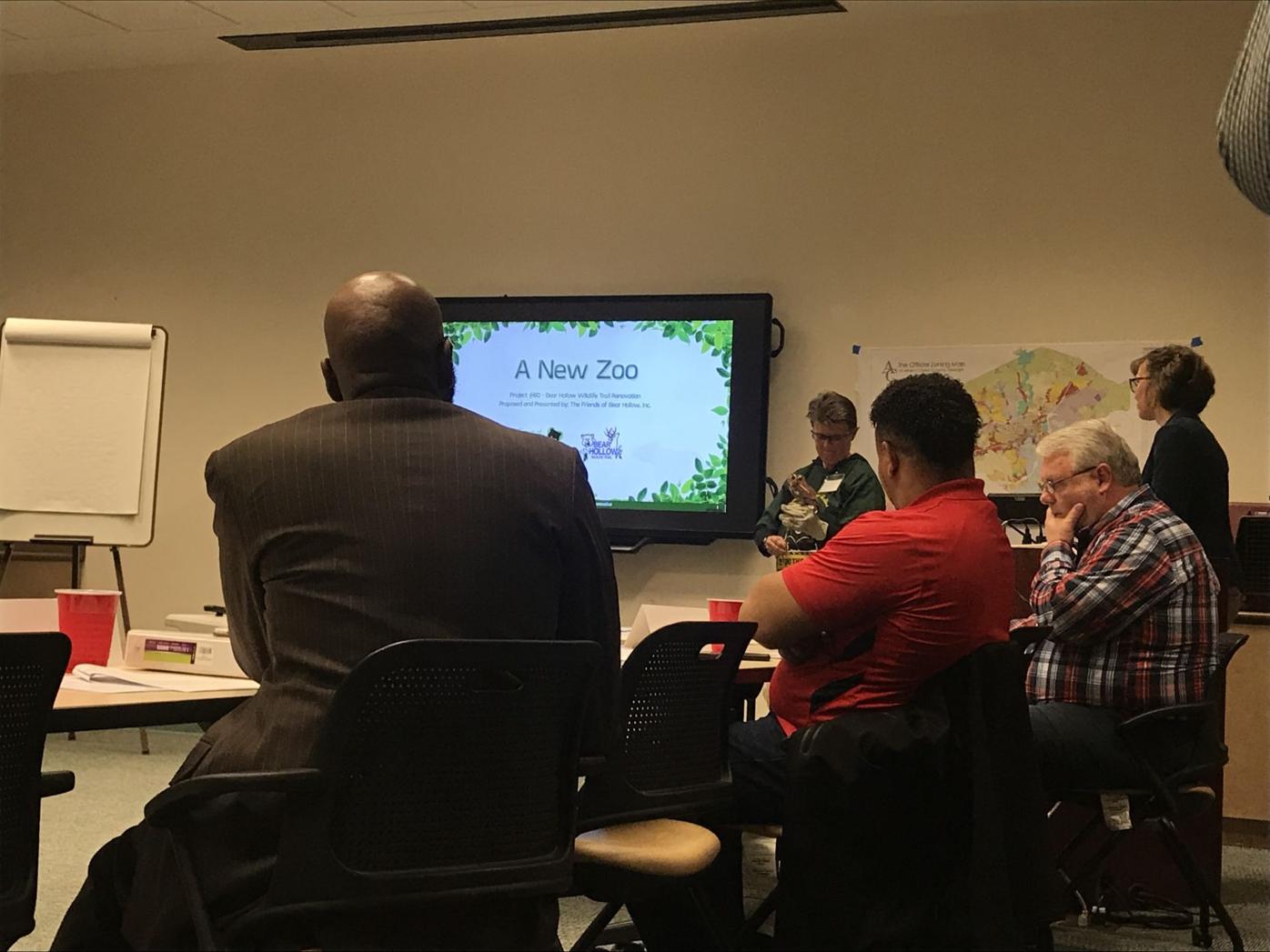 One of the 88 projects considered for SPLOST 2020 funding is a plan to renovate the Bear Hollow Zoo. The plan was presented to the Citizen Advisory Committee Feb. 4. (Photo/Alex Miller)

One of the 88 projects considered for SPLOST 2020 funding is a plan to renovate the Bear Hollow Zoo. The plan was presented to the Citizen Advisory Committee Feb. 4. (Photo/Alex Miller)

Projects discussed at the Feb. 4 meeting:

As the SPLOST 2020 Citizens Advisory Committee continues with presentations for several projects, presenters have gotten more and more creative. For example, Friends of Bear Hollow Inc. decided to bring along a tiny Eastern screech owl for their presentation on Monday night.

The CAC is currently faced with 88 potential projects. The CAC is tasked with narrowing down the projects to submit a final list of proposed projects to the Athens-Clarke County Mayor and Commission in July.

This project was submitted in 2011, but wasn’t selected, and includes the construction of a glass tower structure that would mainly be used for horticulture purposes, but could also be used by the Athens-Clarke County Police Department.

Steve Dashiell, Athens resident and presenter of the project, suggested the area be used as a greenhouse because of its access to light.

“We currently do not have a second set of the protective gear,” Jeffrey Scarborough, chief of ACC Fire Department said.

Scarborough added, “research has also found a link between overusing protective gear and cancer risk,” emphasizing the need for replacements.

This project involves constructing a brand new emergency operations center that would include a large space and offices all dedicated primarily toward emergency preparedness and firefighter exercise, open all hours throughout any given year.

Hendrix emphasized how important SPLOST is in getting this project built.

“Currently there is no capital project proposed for this project so SPLOST is necessary and we can’t get help from the federal government it has to be local,” Hendrix said.

This project would establish a water trail system designed for fishing, kayaking, canoeing, paddle boarding and any other non-motorized water activity on the North Oconee, Middle Oconee and Oconee Rivers.

Features necessary for the development of the trails include boat launches, safety signs, parking and restroom facilities and promotional tools. The trail intends to align with beginner-level paddling.

“We know that Athens is known for music, sports and food, but we would like Athens to also be known for recreational activities,” Diane Windham, water trails chair for the Upper Oconee Watershed Network, said.

Windham continued. “There are currently 98 navigable river miles in the upper Oconee trail and we want to develop safe citizen access.”

This project would renovate portions of the zoo at Bear Hollow Wildlife Trail including restrooms, pathways and infrastructure. The plan also includes a new reptile house, animal nutrition building, an educational garden and additional exhibit constructions and improvements.

Jenny Kvapil, a former program specialist at Bear Hollow Wildlife Trail, talked about how the zoo isn’t the same as when it was first built.

“It has now been 31 years since the last improvement to the zoo — we want to build something that’s new and modern,” Kvapil said. “There are no bathrooms down inside the zoo and we need the infrastructure for a modern facility.”

This project involves developing the 149 acres of land along the Middle Oconee River at Beech Haven into a park, owned by ACC.

Tommy Valentine, executive director for ACC Heritage Foundation, talked about how this area would be a great location for a park.

“This is our once in a ten-year shot for us to show that the western residents of Athens deserve a park,” Valentine said, “we’re asking you to help us continue to be good stewards of this land and develop it for public use.”

This construction project’s two main highlights are the addition of a bike track and basketball courts, but it also includes additional parking, restrooms and a playground. The plan falls under the existing Trail Creek Park Master Plan, approved in 2017.

The presenter Seth Younger, president of the Athens Southern Off-Road Bicycle Association chapter, said that he and SORBA believe these two elements together would create a crossover of users at Trail Creek Park and hopes the addition of amenities would improve traffic.

Correction: A previous version of this article incorrectly referred to Jenny Kvapil's title. The error has since been corrected.

The SPLOST 2020 Citizens Advisory Committee heard over $61 million worth of projects on Wednesday.

With 2019 having just started, the SPLOST Citizens Advisory Committee for Athens-Clarke County is already looking forward to 2020.

Minutes after five Athens-Clarke County commissioners and Mayor Kelly Girtz were sworn in, the new commission and mayor held its first meeting of the year.

The re-zoning requests drew questions from citizens on the amount of affordable housing in Athens, which has become an increasingly important issue, affecting lower-income communities and communities of color. Citizens also raised concerns about crime in East Athens, especially due to recent strings of murder and armed robbery.

Gonzalez, a first-time legislator, was ousted as a member of Georgia’s House of Representative for District 117 by Houston Gaines in last November’s midterm elections after flipping the long-time red district to blue in 2017. Now, her show will air Sundays from 5 p.m. to 5:30 p.m. on WXAG 92.7 FM & 1470 AM.

Kicking off the penultimate week of SPLOST 2020 projects, the Citizens Advisory Committee heard seven projects, including some involve the expansion of trails, improvements to the Fire Department and construction of a new correctional facility.

There are 88 projects proposed for SPLOST funding for 2020. Here's a deeper look at three of them born from the zeal of community members.

SPLOST in translation: Explaining the funding process for SPLOST 2020

The CAC is currently faced with 88 potential projects and, according to Keith Sanders, the SPLOST Program Administrator, the SPLOST 2020 budget is about $248 million. The CAC is tasked with narrowing down the projects to submit a final list of proposed projects within the budget to the ACC Mayor and Commission in July.