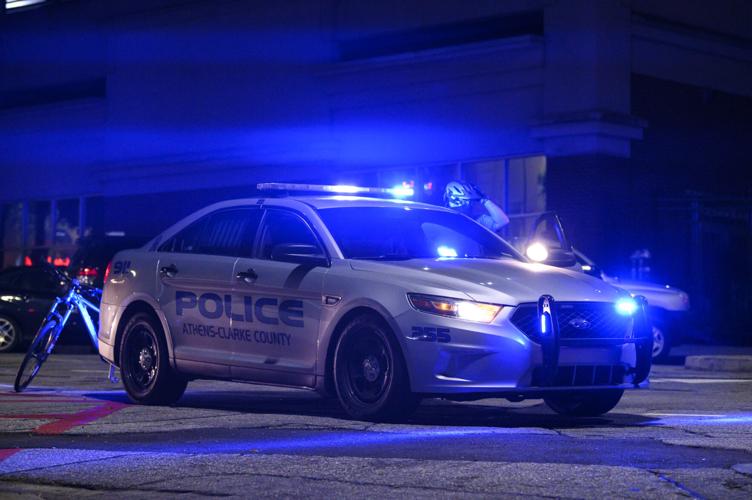 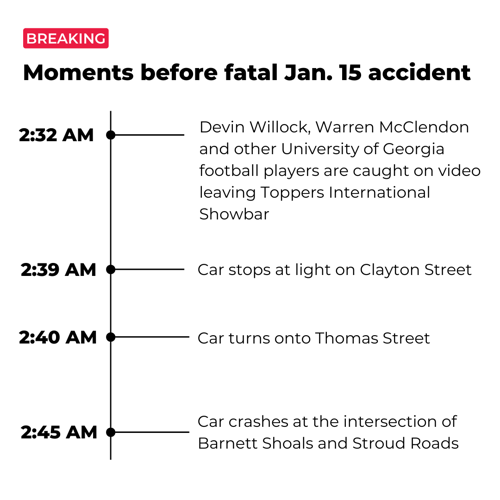 Information from reporting by The Atlanta Journal-Constitution.(Design/Abbie Herrin)

The crash occurred about 2.5 miles from Toppers, at the intersection of Barnett Shoals and Stroud roads, when the car left the road and hit two trees, two poles and came to rest against an apartment complex, according to a crash report released by the Athens-Clarke County Police Department.

Speed was a contributing factor in the crash, according to the crash report.

The group was among the last to leave the bar, which closed at 2 a.m., according to the AJC.

Willock and McClendon were identified in the video by the AJC using photographs and social media posts. The two were wearing the same clothes and hats they had been photographed in hours before. It is not clear when Bowles and LeCroy met up with the athletes, according to the AJC.

UGA has not answered any questions from the AJC nor released a new statement concerning the video.

The Red & Black has reached out to UGA Athletics, ACCPD and Toppers for a comment. No response has been received at the time of publishing.

This is a developing story. The Red & Black will publish updates as they are available.

Private and public celebrations of life for Devin Willock announced

A private celebration of life will be held for Devin Willock in Athens on Saturday morning, according to a release from the University of Georgia Athletic Department.

A public celebration of life will be held honoring Willock on Jan. 27 in Englewood, New Jersey.

A press conference was called by the personal injury law firm Go Big Injury Lawyers Thursday afternoon regarding Devin Willock. The conference was set to include the parents of Devin Willock, but they were not in attendance. The University of Georgia offensive lineman was killed in a car crash early on Sunday morning, along with recruitment football staff member Chandler LeCroy.

An ambulance carrying injured University of Georgia offensive lineman Warren McClendon was struck by a drunk driver in downtown Athens on Jan.…

University of Georgia director of athletics Josh Brooks released a statement on Tuesday regarding the fatal car crash on Jan. 15 involving two UGA offensive linemen and two members of the recruitment staff, and the circumstances surrounding the crash.

Attorney Roy T. Willey IV speaks at a press conference held regarding the University of Georgia offensive lineman Devin Willock at the Athens-…