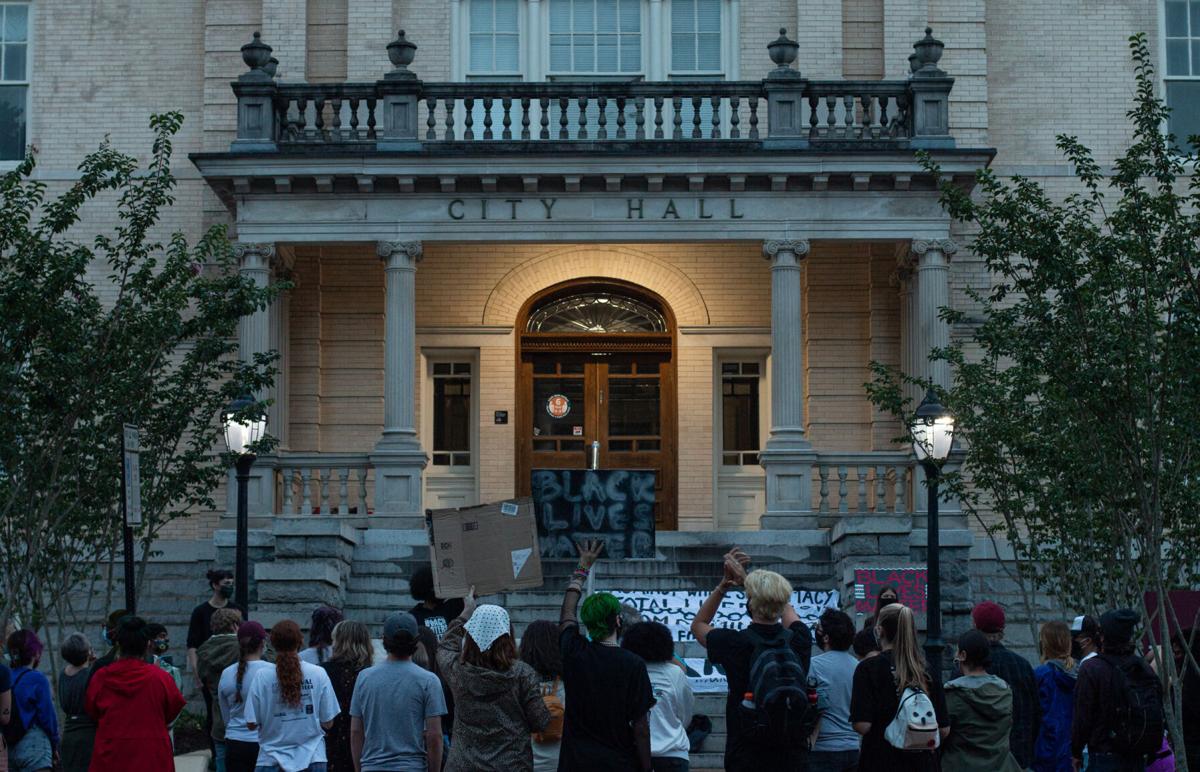 Athens residents gathered around City Hall on Tuesday, Aug. 25, 2020, in Athens, Georgia to protest the recent shooting of Jacob Blake by police officers in Kenosha, Wisconsin. The protest was led by district two county commissioner Mariah Parker. The more than 100 person protest was met with a small group of counter-protesters. The demonstration continued when protesters marched through downtown Athens chanting in support of the Black Lives Matter movement. (Photo/Sophie Yaeger, syaeger@randb.com) 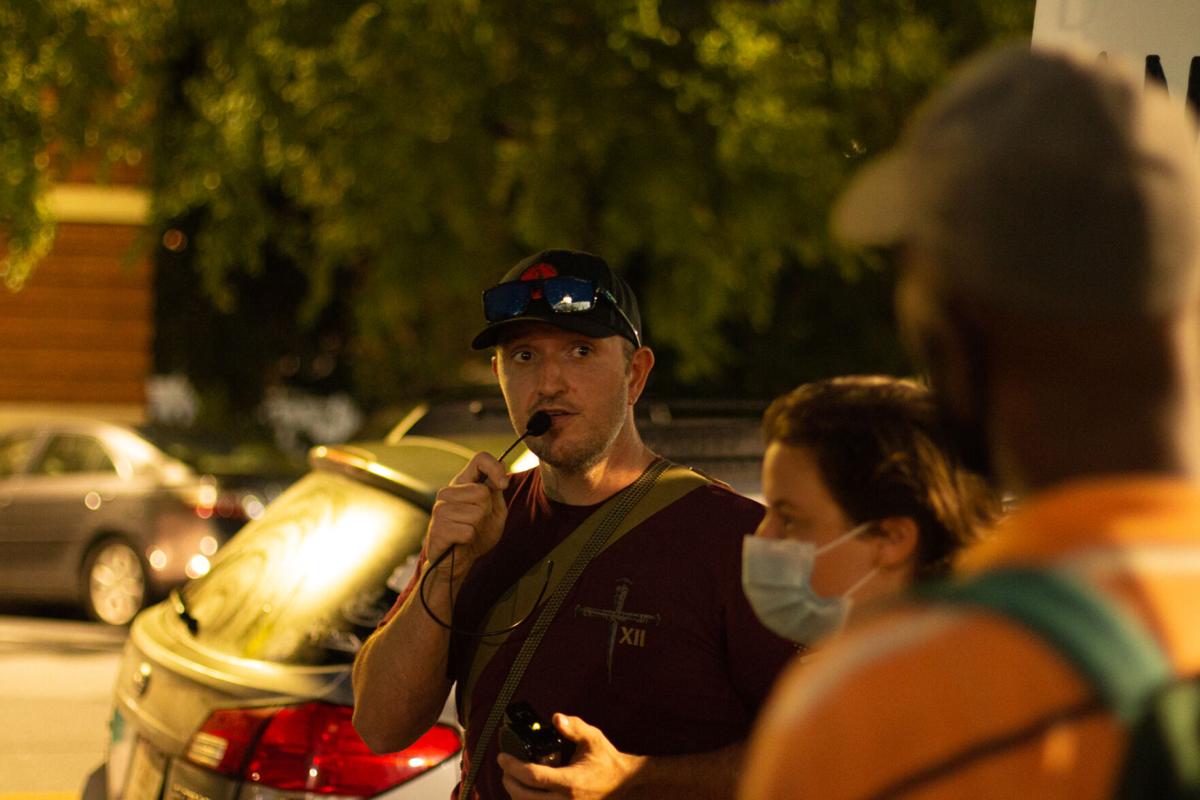 A counter-protester speaks into a microphone on Tuesday, Aug. 25, 2020 near City Hall in Athens, Georgia. The protest was led by county commissioner, Mariah Parker, in response to the shooting of Jacob Blake by Wisconsin police officers which occurred this past Sunday. (Photo/Sophie Yaeger, syaeger@randb.com) 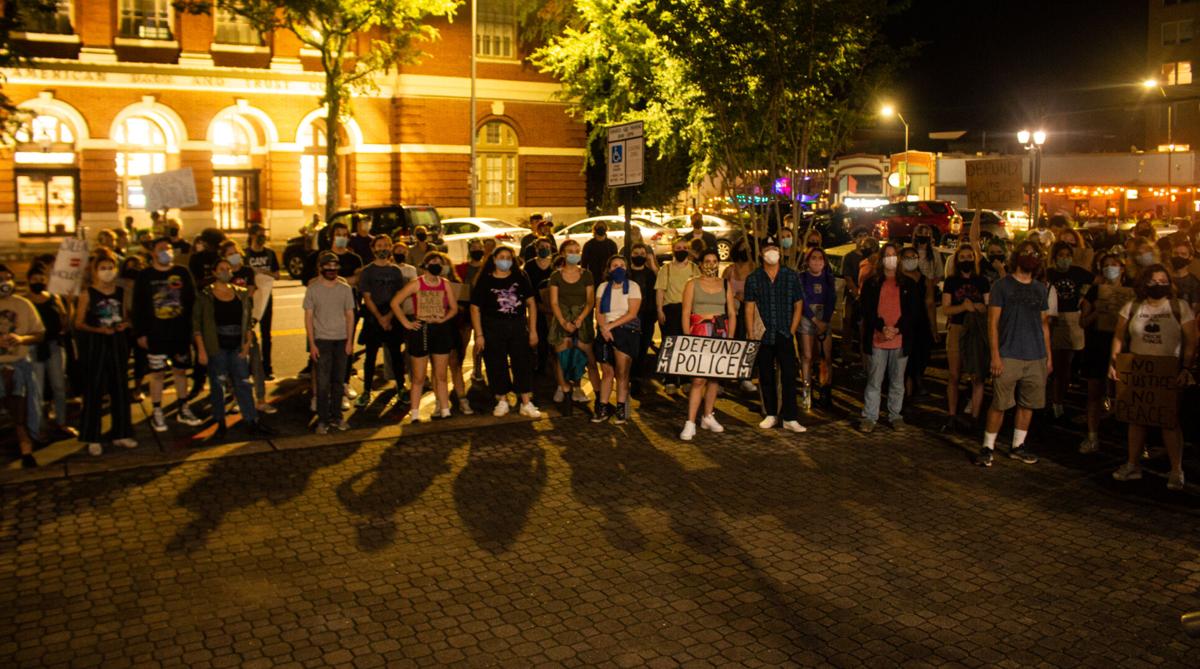 Athens residents gathered around City Hall on Tuesday, Aug. 25, 2020, in Athens, Georgia to protest the recent shooting of Jacob Blake by police officers in Kenosha, Wisconsin. The protest was led by district two county commissioner Mariah Parker. The more than 100 person protest was met with a small group of counter-protesters. The demonstration continued when protesters marched through downtown Athens chanting in support of the Black Lives Matter movement. (Photo/Sophie Yaeger, syaeger@randb.com)

The near-death of Jacob Blake, a 29-year-old Black man, at the hands of police in Wisconsin has sparked a new wave of protests against racial injustices nationwide, including in Athens.

A Kenosha, Wisconsin police officer shot Blake at close range multiple times, reportedly in the back, as he walked around the front of his car and tried to enter the SUV where his kids were sitting. A widely circulated cell phone video of the shooting has been viewed millions of times online.

In collaboration with the Athens Anti-Discrimination Movement, District 2 Commissioner Mariah Parker organized a peaceful protest — “Justice for Jacob Blake” — in front of Athens City Hall Tuesday evening, where over 120 people showed up in support of the Black Lives Matter movement.

Parker and other protest speakers called for defunding the police and promoting a tighter social network to meet the community’s needs instead of relying on the police to keep Athens safe.

“We are who keeps us safe, not the police. Good jobs keep us safe. Stable housing keeps us safe. … Families that stay together keep us safe,” Parker said, with the protesters repeating in unison. “We will fund these things until all of us are safe and the police are obsolete.”

For the majority of the rally, protesters repeated back the speakers’ words loudly to drown out the taunts and counter-chants — such as “no Jesus, no peace” — from less than 10 counter protesters.

“We must learn to love the ignorant, and the hateful, and the people who are being left behind, and we must bring them into the new future,” Parker said, referring to the counter protesters. “We have so much racism to fight within ourselves, to fight within our schools and our homes and our churches and our neighborhoods, and that is why education is critical.”

This protest comes on the heels of multiple racial justice protests in Athens over the summer, sparked the police fatality shooting George Floyd and Breonna Taylor. In response, the Athens Mayor and Commission removed the downtown Confederate Monument earlier this month.

Athens native Wes Johnson spoke to the crowd, telling them about his and his family’s fear of living in Athens.

“I’m Black. I was raised in Athens, Georgia. I got one Black wife and two Black kids. I don’t like that we don’t feel safe in the place we live...,” Johnson said, with the crowd repeating back every word. “It is hard to keep seeing my people get killed for not doing s--t. For not doing s--t.”

In a press conference Tuesday afternoon, civil rights attorney Ben Crump called the shooting a “brutal use of excessive force once again on an African American.” Crump said the bullets severed Blake’s spinal cord and shattered his vertebrae, and that it will take “a miracle” for Blake to walk again.

The Associated Press reported Tuesday evening police in Kenosha have released almost no information about the shooting, beyond saying the officers were responding to a domestic dispute when they encountered Blake.

Wisconsin’s Department of Justice Division of Criminal Investigations announced Monday it is investigating the shooting and the involved officers were placed on administrative leave.

Gov. Evers declared a state of emergency in Wisconsin on Tuesday evening after some businesses were vandalized and government buildings burned. The declaration activated the state’s national guard to support local first responders and protect critical infrastructure. In Tuesday’s press conference, Blake’s mother, Julia Jackson, called for the violent protests to end.

As the evening progressed in Athens, the rally turned into a march. Parker led the crowd away from City Hall down East Washington Street, turned right onto North Thomas Street, then to East Clayton Street and finally brought the protesters back to City Hall by walking up College Avenue.

The protesters spilled on to the edges of the streets, taking up the entire block as bar-goers looked on and a few cars honked their horns in solidarity.

As the protest ended around 10 p.m., most of the counter-protesters had already left the scene. Parker called on the crowd to reach out and meet with their local representatives to discuss defunding the police, as one of the action steps she listed out in a link shared with the audience.

The protests ended with its participants and speakers dancing to the chants of “Black lives matter” and “No justice, no peace.”

“They want to believe that y’all are some interlopers … y’all some passers-by. But this is our community too. And I need you to show them because I am just one voice,” Parker shouted. They are accountable to you, so hold them accountable.”

Local activists with the Athens Anti-Discrimination Movement held a rally on Aug. 20 and called for substantial policy change to protect Black lives in the city and on the UGA campus.

What’s next for downtown Athens space after Confederate monument removal?

As construction continues on Broad Street after the removal of the Confederate monument on Monday night, local government officials and the community are looking toward the steps that must come next.

The Davenport-Benham Black Law Student Association of the University of Georgia organized a march on Friday evening with local activist groups such as the Athens Anti-Discrimination Movement, calling for racial and economic justice in Athens and UGA.

After a summer of protests and rallies following deaths in the Black community, some Athens residents are seeking to continue the fight for racial justice this fall.

We have not forgotten George Floyd but the police department has shown another severe example of brutality by shooting Jacob Blake. Reading bestessay reviews online before help in research paper is always very easy. It seems that the law enforcement agencies want to increase the racism.