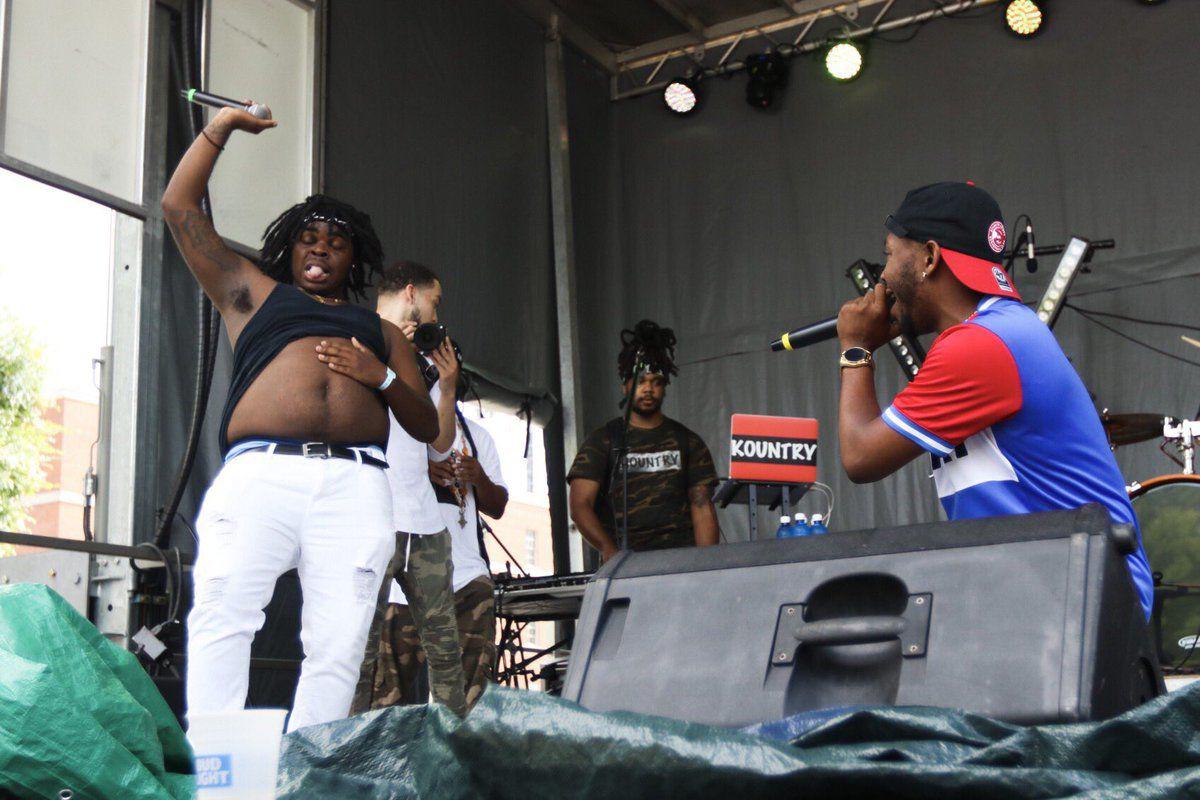 Hip-hop artist Kxng Blanco rubs his stomach while performing on the Mainstage at AthFest on Saturday afternoon. (Photo/Gabriella Audi, www.gabbyaudi10.wixsite.com/mysite-1) 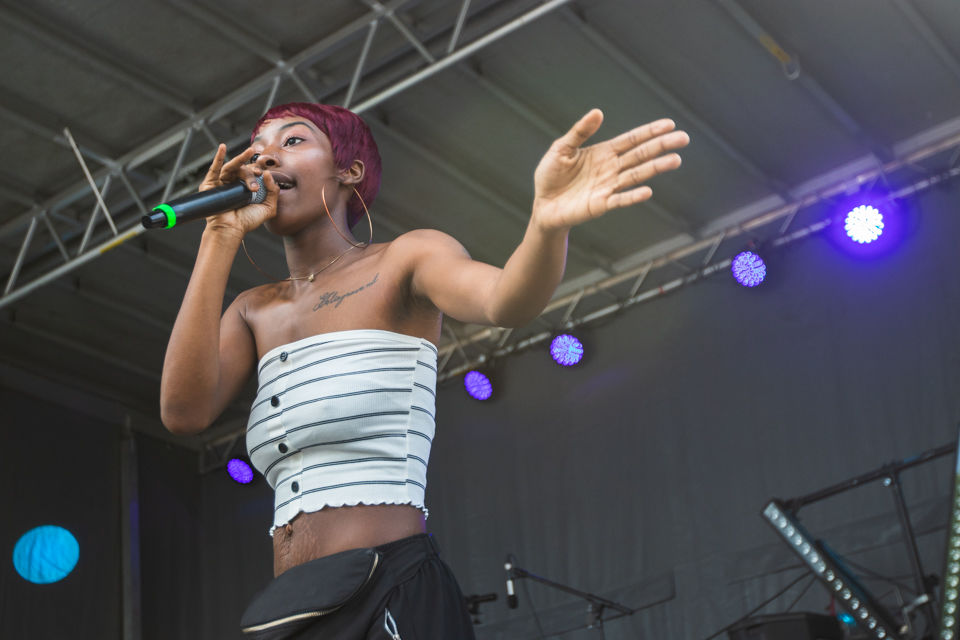 Hip-hop artist Seline Haze performs on the Mainstage during the second day of the 23rd annual AthFest Music and Arts Festival on Saturday, June 22, 2019, in Athens, Georgia. (Photo/Gabriella Audi, www.gabbyaudi10.wixsite.com/mysite-1)

Scheduled from 4:50 p.m.-5:30 p.m., five hip-hop artists and groups performed original songs to a receptive crowd. With all in attendance sweating profusely, the audience and performers shook East Washington St. with the song and dance of local Athenian hip-hop.

DK, also known as Dedric Knowles, opened the hip-hop show with a special message for his fellow artists.

“I just need y’all to know that if you are a part of hip-hop in AthFest, I need you to know that you’re doing this not only for you in your present moment but you are doing this for the future as well,” rapper DK said. “Little kids can see people doing what they love and getting people to feel their passion that look just like them.”

Seline Haze, who served as a background singer for DK moments earlier, stepped forward and introduced herself as the second main act of the show after receiving accolades from stage manager and announcer Montu Miller for her hip-hop skills.

Once she started rapping, her talent became clear. Haze’s fiery style hooked the audience as she moved across the stage. In her songs, Haze said she attempts to discuss mental health and unapologetically promotes self-care.

Kxng Blanco and his crew owned the stage directly after Haze made her exit. The rappers had the audience jumping with their hands in the air as Blanco and his other performers danced and sang like no one was watching.

This energy only made the audience go crazy. Kxng tossed his jacket into the crowd and had them shouting the hook to his song — “You cannot ride the wave!”

Tony B came out next and carried the energy over. Sporting an Ice Cube T-shirt, Tony B won the crowd over with his intricate lyrics and passionate performance, pacing in circles while he performed.

For the final act, Squalle performed in a shirt emblazoned with the word “Legendary” on the front. He and his accompanying performers danced their hearts out to crowd-rousing beats. As the music swelled, Squalle partially hopped off the stage as he leaned over and placed his foot on a large speaker on the ground and swayed. During the latter half of their performance, the group employed background dances to the audience’s roar.

After the event, the audience dispersed. One such audience member was District 5 Commissioner Tim Denson. Although hot, Denson wasn’t ready to leave just yet.

“I was thinking I wanted more songs. The last performers ... are some of the best performers that Athens has and they got the ante up to such a height that I was ready for more songs,” Denson said.

Although the event ended 15 minutes late and delayed the upcoming mainstage performance, no one seemed too distraught.

Miller closed out the showcase by hyping up the crowd with his long dreads gently swaying side to side. He encouraged the audience and performers to come to the 6th annual AthFest Hip-Hop showcase at Live Wire later that night, as a part of the Club Crawl.

“Athens Hip-Hop had an up fight but we have arrived,” Miller said. “There is no other culture in Athens that does what we do ... They will have to give us the key to the city very soon.”

Despite the severe thunderstorm warnings in Athens-Clarke County, the second day of the 23rd annual AthFest Music and Arts Festival didn’t mis…