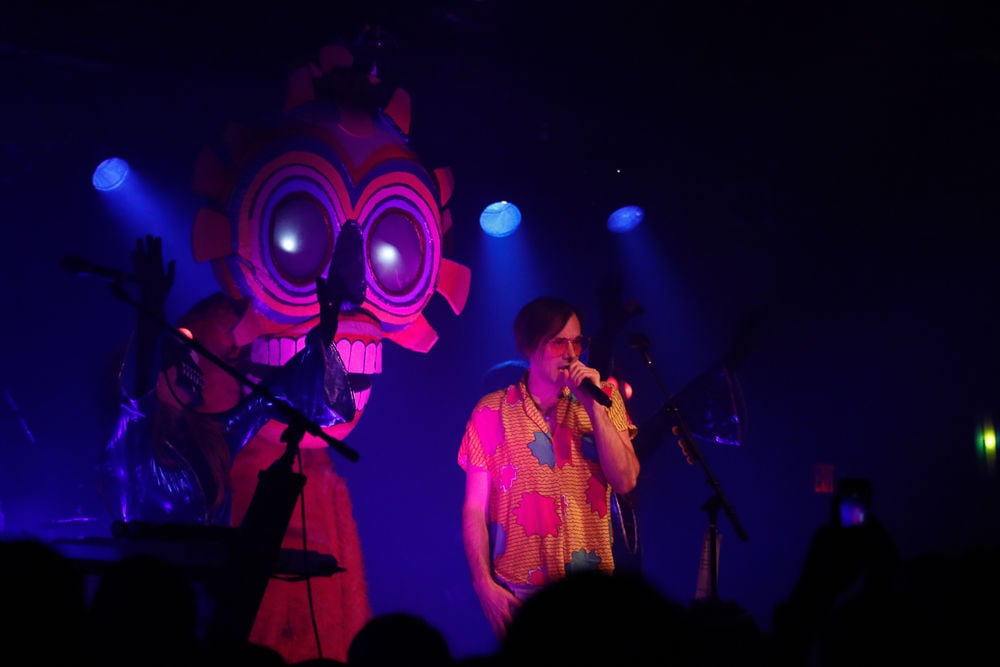 of Montreal, an indie pop band from Athens, performs during the Club Crawl at 40 Watt Club. The second day of the 23rd annual AthFest Music and Arts Festival occurred on June 22, 2019 in Athens, Georgia. The outdoor stages hosted crowd favorites as the Bar Crawl hosted bands after hours. (Photo/Daniela Rico) 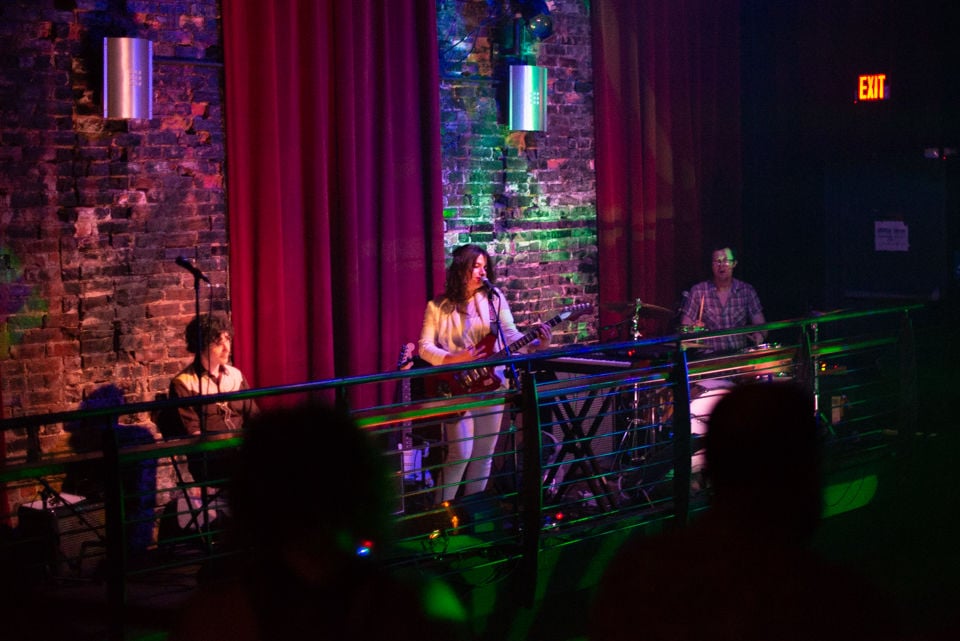 Thayer Sarrano in concert at the Georgia Theatre during the 23rd annual Athfest Music and Arts Festival in downtown Athens, Georgia. (Photo/Julian Alexander) 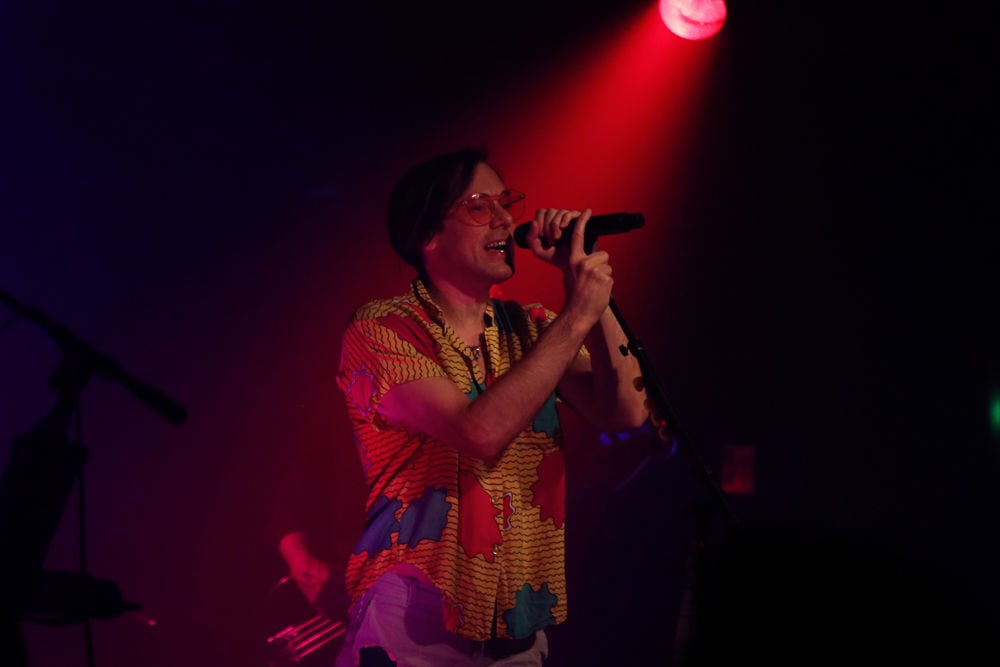 Athens-based pop group Of Montreal will perform at the Georgia Theatre on Feb. 27. (Photo: Daniela Rico) 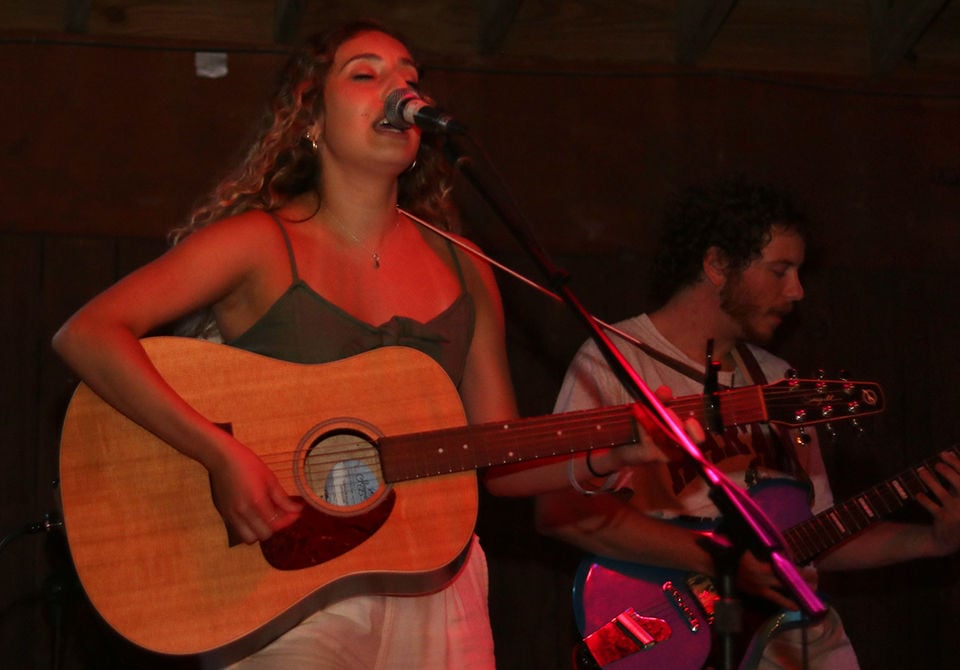 N1KI performs at the Iron Factory stage on the second day of AthFest 2019 in Athens, Georgia on Saturday, June 22, 2019. This was N1Ki’s first time performing at the festival. (Photo/Caroline Barnes, https://carolinembarnes.wixsite.com/photography) 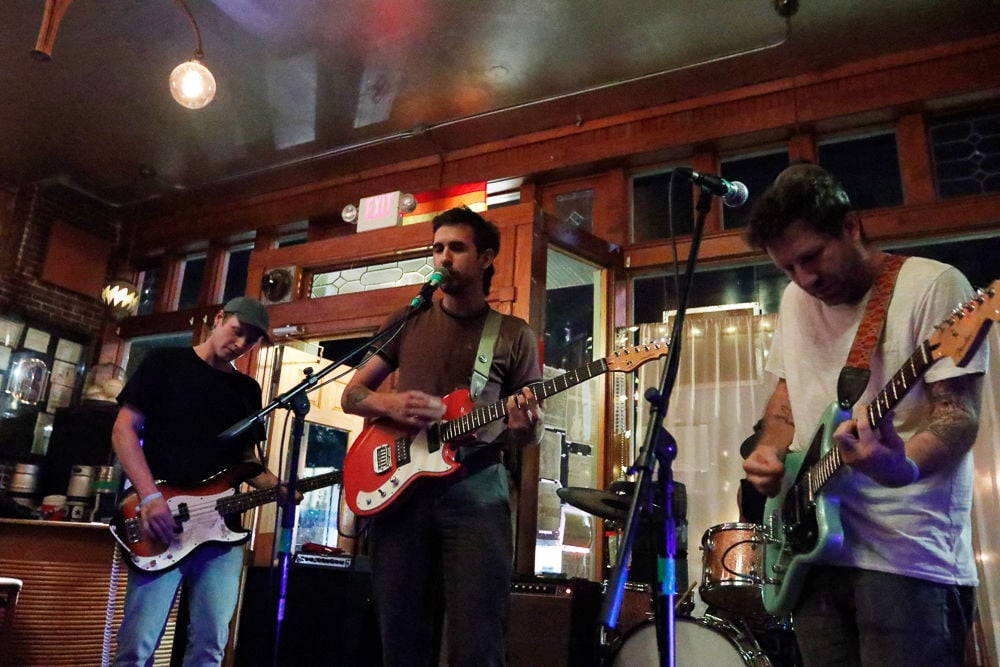 Sarrano only said a handful of sentences to the crowd during her set, which might’ve been off putting at another show. However, the lack of audience interaction only seemed to intensify the hypnotic effect of Sarrano’s haunting, ethereal singing.

Sarrano explained that the strange, beautiful quality of her songs is the result of her songwriting process.

“I’ll be dealing with whatever is happening in front of me or the emotion of a beautiful or terrible situation, and the lyrics that I’ll get for some reason usually tend to come more from the abstract higher place because it provides more clarity,” Sarrano said previously.

Sarrano’s unique musical style could be described as southern gothic or psychedelic indie, but her instrumentals stray from those genre definitions. At the show the keyboard took on a sound reminiscent of a church organ used in gospel music, and other moments the drums and guitar had a rock ‘n’ roll quality to them.

The diversity of Saranno’s instrumental sound is likely a result of her classical training on the piano.

The theatre had a more relaxed, low-key quality during Sarrano’s set than was experienced at some of the venue’s prior shows. Rather than head-banging, there was swaying and subtle head-bobbing.

Saranno finished her 9:30 Club Crawl performance with some acapella vocals and a guitar solo before leaving the stage.

Kevin Barnes, of Montreal’s lead singer, was introduced to the stage by a man in a skeleton morph suit wearing a Deadpool mask. He riled the crowd up for the show, making them question societal rules and norms and giving Barnes the opportunity to make a grand appearance.

The show deserved no less of an entrance, as the audience experienced sensory overload in the best way possible during of Montreal’s crazy and colorful set.

Barnes kept the crowd hooked and engaged for the entirety of the hour-long psych-pop and indie-rock show as well as during its three encores, played by audience demand.

The singer-songwriter jumped, clapped and danced during his songs, sometimes by himself and other times with a set of costume-clad background dancers.

The dancers were introduced during the first song, when they came out wearing alien-esque costume heads with red light-up eyes to dance in front of a large, colorful creature that was looming behind Barnes.

Wacky costumes were a theme for of Montreal’s dancers, as they wore a new, creative and dream-like outfits when they came out every few songs.

The energy of the crowd was just like Barnes on Saturday night — happy and carefree. Both the performer and the festival-goers danced to the beat of their own drum as well as to the beat of of Montreal’s music, all under a cloud of marijuana.

Ellen Hardin, 22, a 2019 spring graduate from the University of Georgia, is an of Montreal fan but said that the concert was nothing like what she was expecting.

“They did a really good job of playing what you hope to hear but keeping you excited about what you’re going to hear next,” Hardin said.

She said that she had heard since freshman year that of Montreal was the one band you were supposed to see before leaving Athens, and she was happy to fulfill that requirement Saturday night.

The psych-pop indie-rock group hails from right here in Athens. of Montreal thanked the 40 Watt Club as well as Atomic Clothing — where Barnes had gotten his colorful button-down shirt he was wearing — at the end of the show.

Drenched in pink light and acoustic guitar in hand, Niki Neiconi greeted her fans in the outdoor section of the Iron Factory. Neiconi is a singer song-writer based in Athens, providing catchy, original indie tunes and well-loved covers alike.

People sat outside, gripping drinks and chatting with friends while Neiconi and her bandmates set up. A DJ playing Skrillex-esque dubstep music in Max Canada next door seemed to intrude on the peaceful preparations, but within five minutes, N1KI was ready to go.

She first started with an original song called “Met You Too Late,” high-tempo yet forlorning at the same time — apt with such a title. N1KI moved onto a more upbeat cover of “Everybody Talks” by Neon Trees. For the rest of the night, N1KI introduced the new and the old, intermixing covers of popular songs with the original N1KI tunes.

Abby Hellmann, from Alpharetta, met Neiconi in a freshman year public speaking class, and the two have been friends ever since. Hellmann has seen N1KI and her band grow over the years into the mature crowd-pleaser they were that night.

“I think that her music has really developed, and it’s gotten a lot more personal, which is really cool for her,” Hellmann said.

In N1KI’s performance at the AthFest Music & Arts Festival, Neiconi dazzled the crowd with her talent and magnetic personality. Her indie sound messes with traditional genre barriers to provide a musical fingerprint totally her own, gracing both physical stages and digital platforms like Spotify.

In the little sleepy burrow of the Little Kings Shuffle Club, one solitary man made his own mosh pit at the start of Deep State’s performance. Soon, one man turned to about 20 people joining in on the transfer of pure kinetic energy. It was a sight perfectly matching Deep State’s vigorous punk and rock sound.

After a sound check that seemed to have lasted only a minute or two, lead singer Taylor Chmura quickly thanked the crowd for coming before the band dove into their first song. Wave after wave of garage band punk sound rolled over the audience members, each bobbing their heads or head banging, as would soon become moshing. No one could remain still.

The second song ended, leading the audience to applaud wildly, while the band members sipped from their drinks. Someone from onstage asked an audience member to grab a flag from the Deep State merch table and pass it around. It was an American flag with “Peace please” written in two of the white stripes.

“Starting off, I knew their music was going to be great — just from hearing stuff Brandon would bring home and practice,” Thrash said. “I knew that it was going to be something people loved … It’s hard to hear the lyrics a lot of the time, but a lot of their stuff is very relevant to what’s going on.”

Deep State finished their show with as much energy as they started it. The crowd was disappointed they didn’t get an encore, but everyone soon exited with the high-energy punk rock and political lyrics still ringing in their ears.

N1KI is one AthFest performance you don't want to miss

From the moment Niki Neiconi walks into the room, she’s all smiles.

Neiconi has been to AthFest every year since she started school at the University of Georgia in 2016, but this weekend will be different. For the first time, Neiconi will be performing at AthFest under her stage name N1KI with her band.

Local band Deep State will be performing for the sixth time in the AthFest Club Crawl this weekend.

In preparation for the festival, Deep State’s singer and guitarist Taylor Chmura talked to the Red & Black about the band’s inspiration for its newest album, “THE PATH TO OBLIVION,” and how it feels to be back at AthFest once again.

Attendees of the second day of the AthFest Music and Arts Festival were hit with a pop of blue hair and alternative beats to start off the day.

As blue lights swirled across the walls and ceiling, four bands brought a diverse range of music to the Flicker Theatre on Saturday night. With a black curtain dividing the bar from the theatre, people traveled back and forth from the crowded bar area to the intimate stage to hear the acts perform.

9 concerts to look forward to this fall

The Athens music scene can be a bit intimidating to navigate with all the upcoming shows this season. This fall there are a few big concerts — from genres like dream pop and indie rock — lined up for every type of music lover. Here are nine notable shows you won’t want to miss.