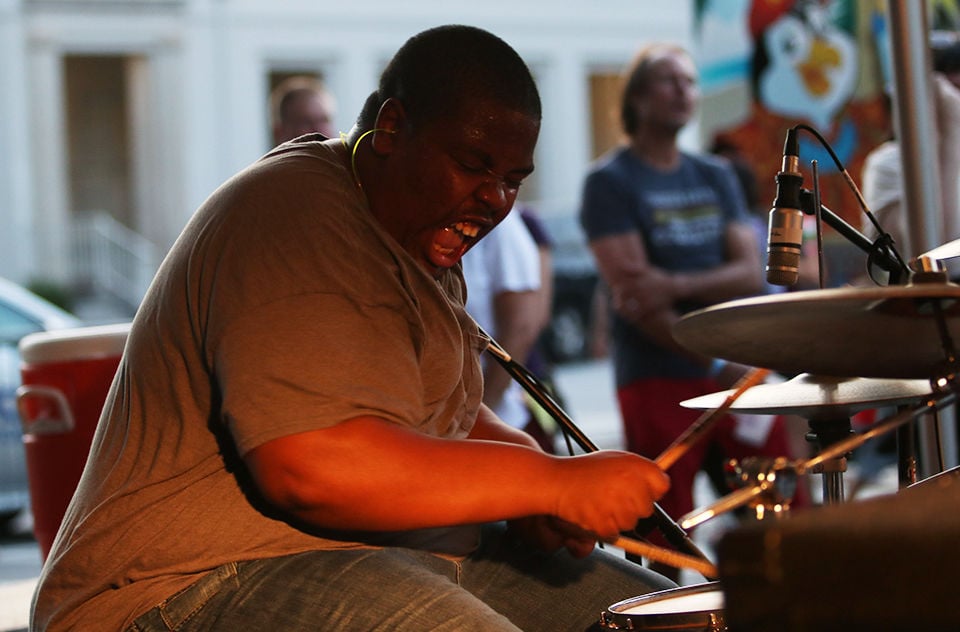 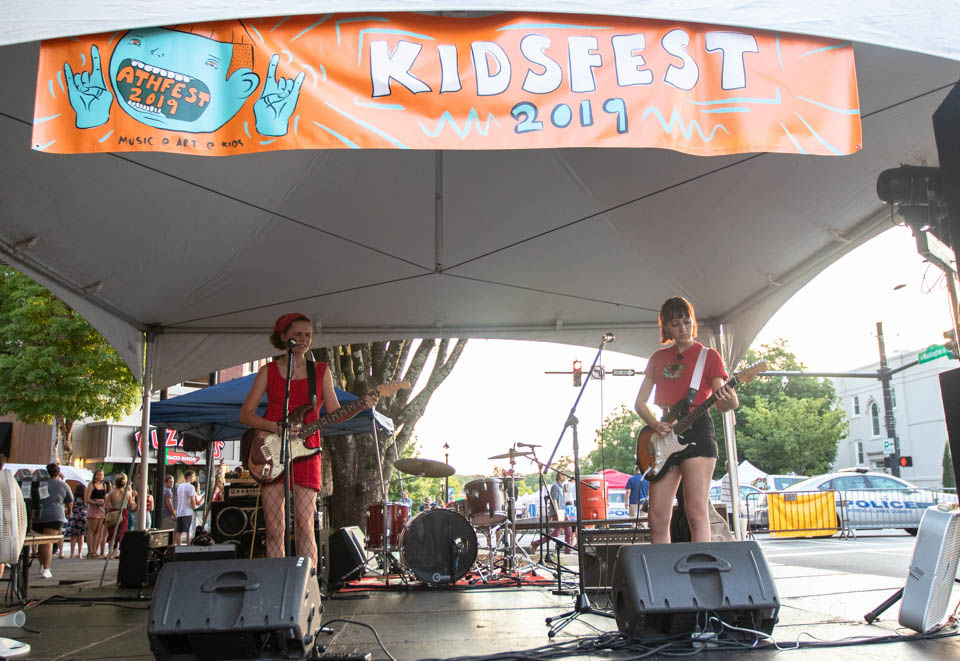 BloodSugar performed at KidsFest during the 23rd annual AthFest Music and Arts Festival on Friday, June 21, 2019, in Athens, Georgia. Bands played on outdoor stages as well as inside 12 different venues at the AthFest Club Crawl. (Photo/Gabriella Audi, www.gabbyaudi10.wixsite.com/mysite-1)

The 23rd annual AthFest Arts and Music Festival kicked off Friday, June 21. The KidsFest stage — located on the corner of Lumpkin and East Washington — welcomed four different bands, all of which brought different styles and characters to the forefront.

Cheese Dream started off the night at 6:00 p.m. with an energetic performance filled with personality. The drummer, Thomas Evans, took off his shirt early in the set and set the tone for an enjoyable and lively 30 minutes despite the Athens heat.

The band has been together for nearly three years, according to bassist Parker Dillard, and its chemistry was palpable for the entirety of the show.

There was also inexperience on display at the KidsFest stage. The second act, which started at 6:50, featured JV Band from the Full Moon Studio, a music school and recording studio based in Watkinsville, Georgia.

JV Band didn’t show as much character or liveliness that Cheese Dream brought, but after all, it was the second show it’s ever played. It performed a handful of well-chosen covers, including Creedence Clearwater Revival’s “Fortunate Son.”

In between songs the members of the band were reluctant to talk to the crowd and one of their teachers from the Full Moon Studio, Scott Nicholson, used it as a learning experience for the young musicians.

“Too much dead air,” Nicholson playfully shouted from the crowd.

“[Fuller] is one of the ones that’s a little bit older,” Nicholson said. “It’s been hard to get other people to sing in the band so he’s kind of assumed that role. So I was like, ‘Well, Matt, you better make sure you entertain the crowd.’”

Nicholson started coming to AthFest as a performer in the late 1990s, and claims the other members of the JV Band will loosen up and get more confidence while performing as they get older and gain more experience.

Following JV Band was an all-girls band called Bloodsugar, which took the stage at 7:40 while AthFest volunteers plugged in additional fans on the stage to combat the humidity.

All of the band members attend school at Clarke Central High School, but the bassist Eva James and drummer Luna Pollack were recent additions after the previous two members quit.

After their second gig together, Bloodsugar plans on continuing together and making their own music in the future. During their 30 minutes set, they performed covers of songs like “Psycho Killer” by the Talking Heads and showed off multiple different styles with their other songs.

The final band, Fishbug, was the most entertaining of the four and perfect nightcap to the first day.

Bassist Parker Dillard and guitarist Moss Ivy were featured in the first band, but made a second appearance with their younger and flashier group. Dillard and Ivy were wearing scrubs and kicked off the set with some humorous antics, first by pouring water all over each other while drummer Isaiah Pope warmed up. Then, after Pope was finished warming up, they played a gag making it seem like Pope had passed out and needed medical attention.

“He’s gone, we need to resuscitate him,” Dillard said as they proceeded to fake-defibrillate the lifeless drummer back to life so they could continue the most lively act of the day so far.

All of the songs were originally written and lead singer and guitarist Stella Perkins brought a range of vocals and energy to the stage that had the crowd bobbing their heads and asking for an encore by the time 9:00 p.m. rolled around.

They finished off the night with another creative and booming original, “It Doesn’t Matter.”

As the sun set on day one of the 23rd AthFest Music and Arts Festival, Calico Vision serenaded the area in and around Hull Street Stage with psych-pop tunes.

Your ultimate guide for surviving and thriving at AthFest 2019

At this year’s 23rd AthFest, there are over 50 performances during the day and dozens more during the nighttime Club Crawl. We compiled a few tips and tricks to help you prepare for the three-day festival.

Your go-to guide for the AthFest 2019 outdoor stage

With over 50 acts performing over three days in from Pulaski to Lumpkin Street, it can be hard to keep track of who is performing on what stage. We compiled a list of the day-by-day schedule, organized by stage to help you map out your perfect music-filled weekend.

The hot, muggy weather of Athens couldn’t compete with the cool events unfolding on the KidFest stage. Starring almost exclusively young talent, the all-ages portion of AthFest shined in terms of letting people of all ages enjoy great music and family-friendly entertainment.

When high school band Fishbug stood on the stage at AthFest Music and Arts Festival, they sang a range of songs about personal circumstances o…