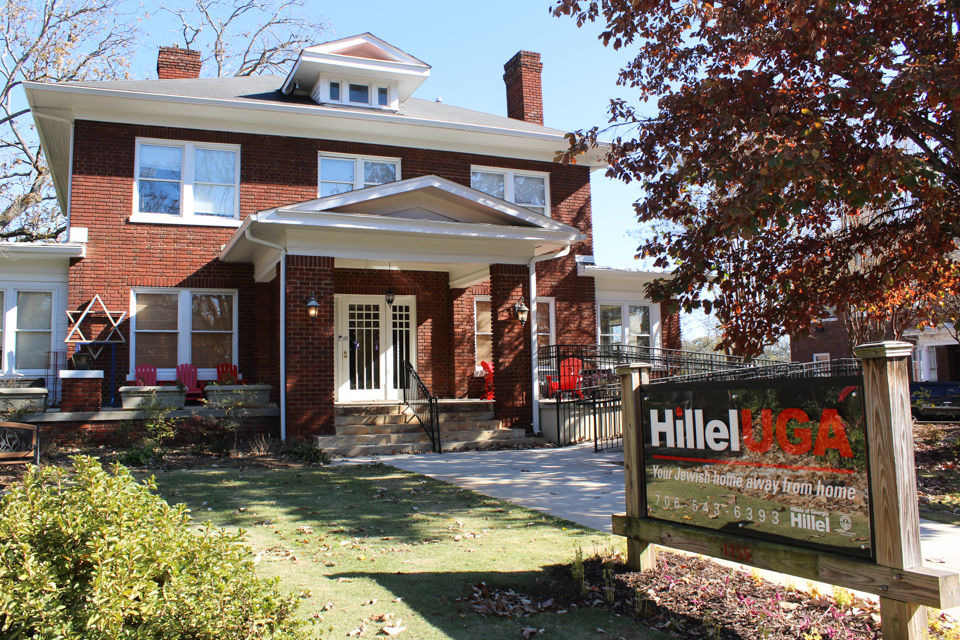 The University of Georgia location of Hillel on S Milledge Avenue in Athens, Georgia. The Jewish community has been involved in the history of Athens since the 1800s, and is still active today with organizations like Hillel. (Photo/Caroline Barnes, http://carolinembarnes.wixsite.com/photography) 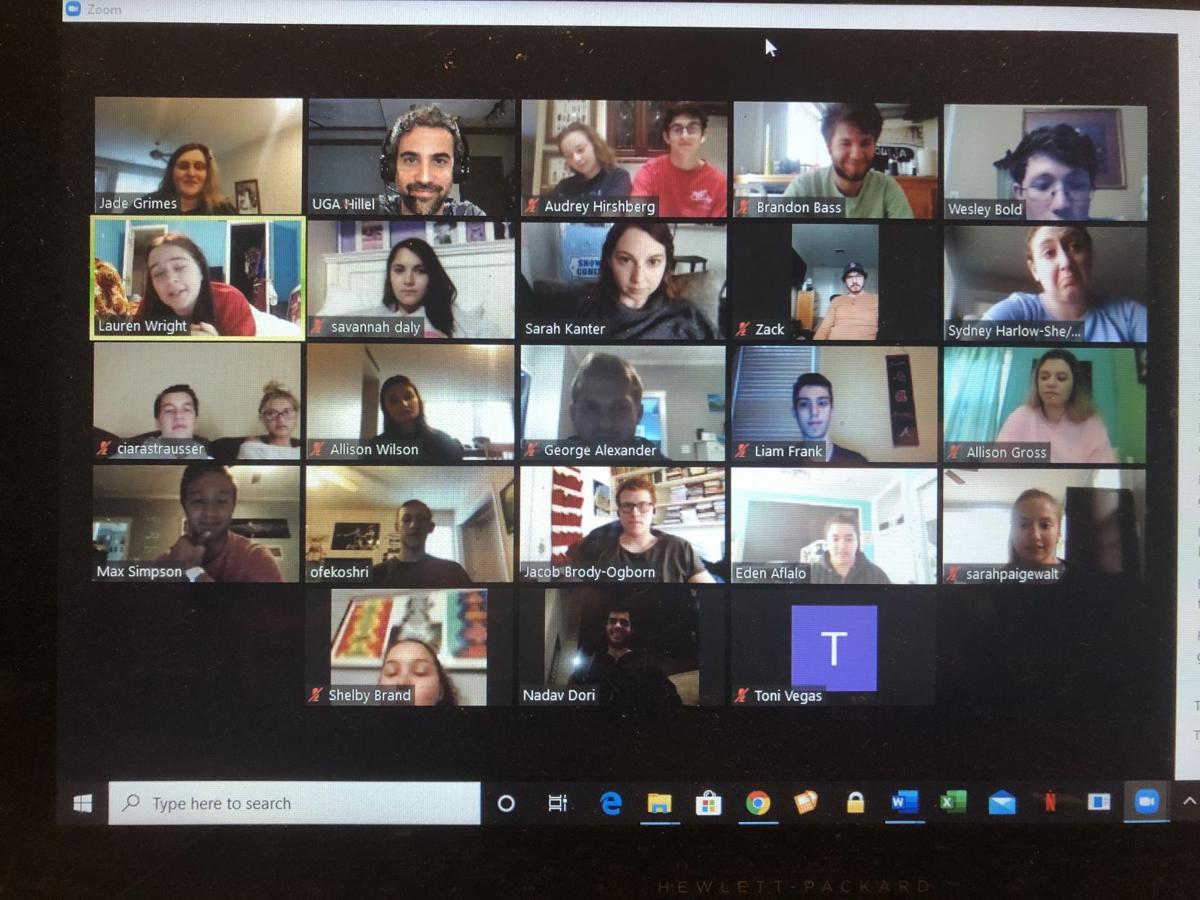 Hillel at UGA hosts a Zoom session for its birthright trip to Israel reunion. (Credit: Roey Shoshan, Hillel at UGA)

Carly Schwamm’s family always looks to the future at the end of every Jewish holiday. This hopeful sentiment is especially important this year as they log into Zoom instead of gathering around a table to have Seder, a part of the celebration of Passover.

“A lot of Jewish holidays are centered around togetherness and celebrating as a family,” said Schwamm, a University of Georgia student and the president of a historically Jewish sorority, Sigma Delta Tau. “Without everyone being able to be together, you lose that sense of community.”

Passover began on April 8 and will end April 16. The UGA Jewish community has had to find other ways to gather during the community-based celebration of the Israelites’ emancipation from slavery in ancient Egypt, said Roey Shoshan, director of Hillel at UGA, a community for Jewish students at UGA. Hillel at UGA, like other religious communities in Athens, have canceled in-person gatherings due to COVID-19.

This year, Schwamm is celebrating Passover with her parents in south Florida. The first two days of Passover are celebrated with large meals, called Seders. Schwamm’s family is used to telling the story of the Jewish emancipation with around 15 people — including her grandparents, aunts and uncles — during Seders. She said the pivot to Zoom celebrations was difficult.

The Rohr Chabad House at UGA, a student center for Jewish students at UGA, prepares a Passover Seder for “a few hundred” participants, Rabbi Michoel Refson said. This year, they’ve had private Zoom conference calls with members to celebrate and have reached out to students to stay connected. Talking with another person outside of the home is a way to stay uplifted during this time, said Refson, who is also the Chabad co-director.

While the Rohr Chabad House couldn’t have usual Passover gatherings in Athens, Refson said Judaism is a religion practiced traditionally in the home, so students are still able to celebrate despite the circumstances.

“When students are in college and they’re not able to go home, they come to us as a home away from home,” Refson said. “The ability to celebrate hasn’t been taken away completely.”

Hillel at UGA, the self-described “focal point” for Jewish UGA students, also had to adjust. April is one of the organization’s biggest months, especially with Passover, Shoshan said.

Some students have their first Passover Seder at Hillel, which throws a celebration for over 200 students every year, Shoshan said.

“Not having an opportunity to do that in person takes away a lot of what we’re trying to educate our students on,” Shoshan said.

Hillel at UGA has moved events online, Shoshan said. Shabbat takes place on Fridays at 6 p.m., Sunday yoga starts every week at 2 p.m and there are caffeine meetings on Mondays and Tuesdays.

Hillel didn’t want to “overwhelm” students with Zoom meetings, so they decided to keep a consistent schedule of weekly events, Shoshan said.

Students in Athens could also pick up free kosher care packages on the first day of Passover, April 8, to celebrate with those in their household, Shoshan said.

When considering how to continue Hillel programs for the rest of the semester, Shoshan said his first thought went to the students and the seniors.

They won’t be able to throw the annual “carb fest,” where Hillel rents out the downtown Mellow Mushroom at the end of Passover. Observers eat unleavened bread and avoid gluten during the holiday, so the group celebrates by throwing “a huge pizza party” for students and Hillel staffers, Shoshan said. Seniors can’t finish out their time with Hillel at UGA or say farewells in person, and freshmen won’t have a place to adjust to college life.

The students come first, Shoshan said, so Hillel made sure to reach out to each member individually to make sure they’re OK during this time.

Hillel at UGA decided to collaborate with Hillel at Emory University and Hillel at Georgia Tech for future programs. The chapters will host a Zoom conference later this month to commemorate Holocaust Remembrance Day, which is on April 20. This collaboration with other schools is something the chapter wouldn’t usually do, Shoshan said.

“With Zoom calls, you lose the restrictions of travel and getting people to stay at hotels,” Shoshan said. “You just hop on a Zoom call, and you’re there.”

Becca Wilson, a senior international affairs major and board member of Hillel at UGA, agrees with the sentiment. She’s in Portugal with her parents.

Usually, Wilson would celebrate at the Hillel house or with her family during an in-person celebration. For a Passover Seder this year, though, she and her mom had a Zoom call with her mother’s friend from California — a seven-hour time difference.

“I don’t think I’ve ever had a Seder with them,” Wilson said.

While families use digital platforms to celebrate the major holiday with new and old friends, Shoshan said the Hillel staff and community hope things look different next year.

“There’s a link to our story of Jewish people waiting for our freedom, and now having the entire world waiting for this thing to be over and go back to normalcy,” Shoshan said. “We try to think about the bright side, so we can wait for the all-clear and be free again.”

The University of Georgia College of Veterinary Medicine has contributed medical equipment to hospitals and is conducting research on COVID-19, according to a UGA Today news release.

Muslim students celebrated the holy month of Ramadan differently this year due to COVID-19.

During an uncertain time, these institutions are trying to understand what this means for gathering and practicing faith as a community.