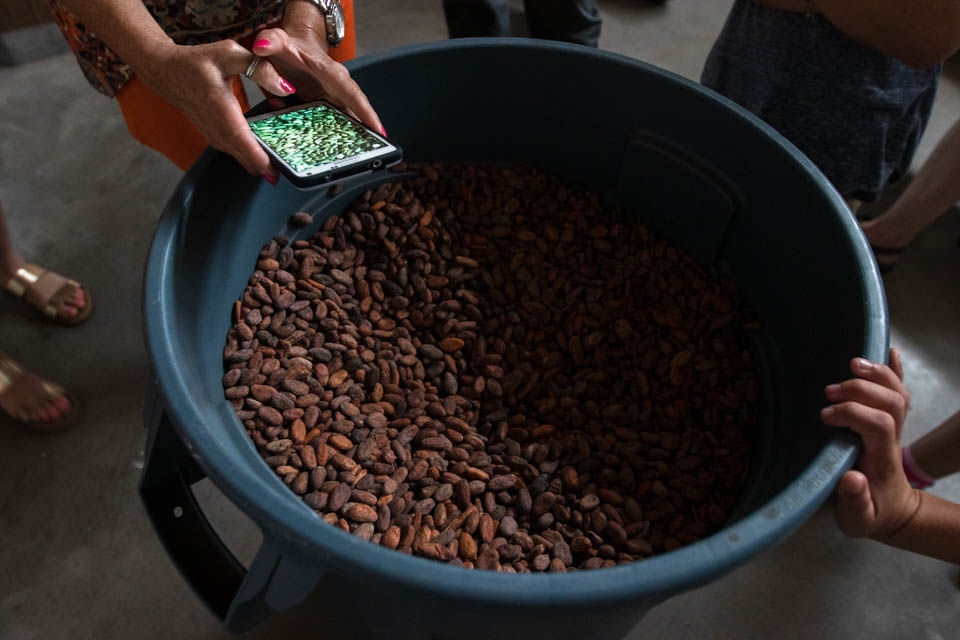 A visitor takes a photo of a bin of raw cacao seeds that have yet to begin the chocolate-making process during a Condor Chocolates factory tour at the Chase Street Warehouses on Saturday, July 20, 2019, in Athens, Georgia. Condor will be taking a break from factory tours to prepare for the Christmas season and will resume later in the fall. (Photo/Gabriella Audi, www.gabbyaudi10.wixsite.com/mysite-1) 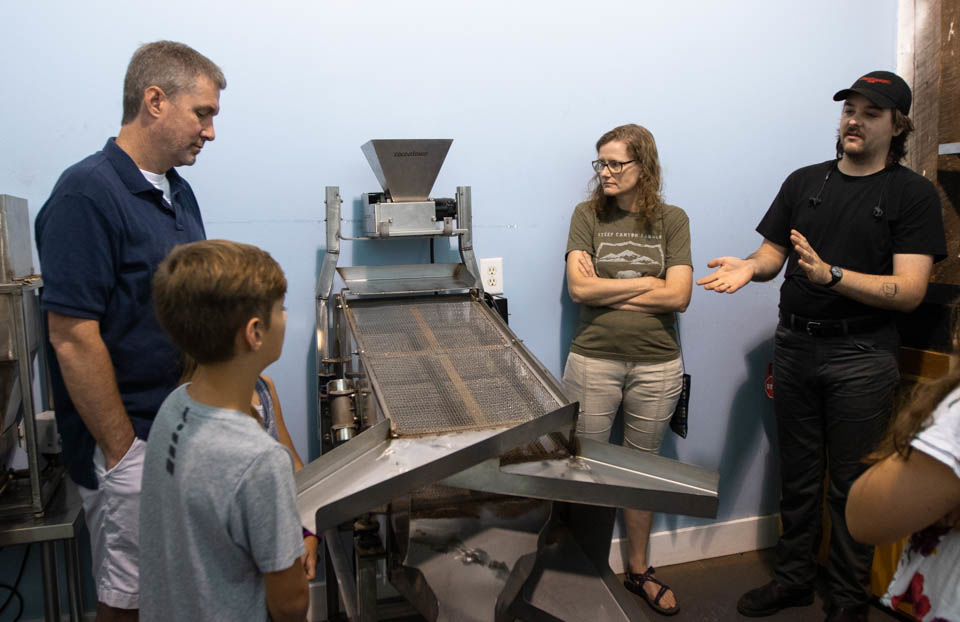 Brandon Lord, 23, talks to visitors about his job as a chocolate roaster and the process of making chocolate during a Condor Chocolates factory tour at the Chase Street Warehouses on Saturday, July 20, 2019, in Athens, Georgia. Condor will be taking a break from factory tours to prepare for the Christmas season and will resume later in the fall. (Photo/Gabriella Audi, www.gabbyaudi10.wixsite.com/mysite-1) 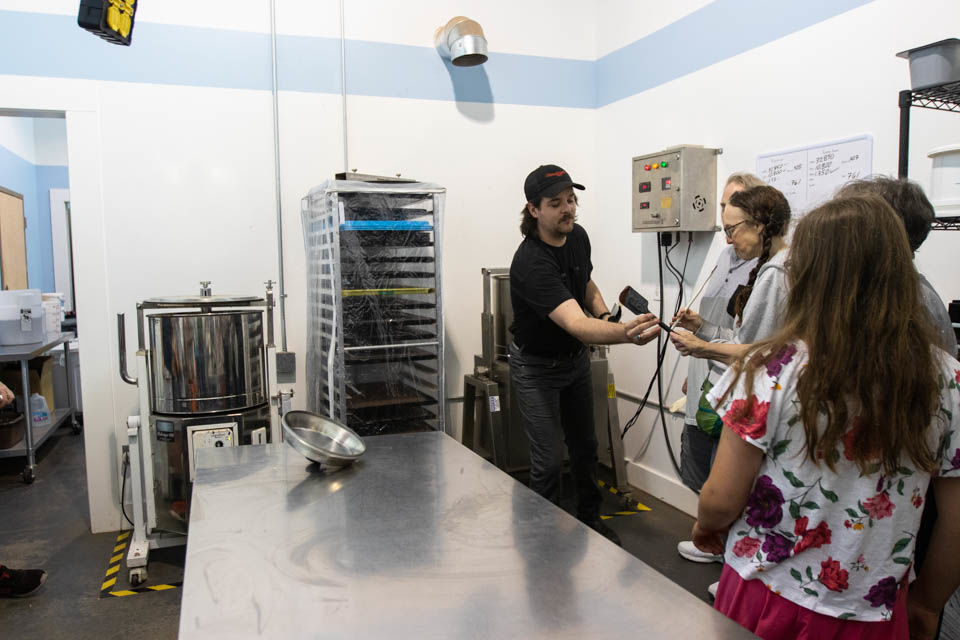 Brandon Lord, 23, hands chocolate samples to visitors while explaining the process of making chocolate during a Condor Chocolates factory tour at the Chase Street Warehouses on Saturday, July 20, 2019, in Athens, Georgia. Condor will be taking a break from factory tours to prepare for the Christmas season and will resume later in the fall. (Photo/Gabriella Audi, www.gabbyaudi10.wixsite.com/mysite-1)

“Do you have Oompa Loompas?” a young voice squeaked from the crowd. “I am an Oompa Loompa, you’re looking at him!” the tour guide teased in response.

Brandon Lord, a full-time chocolate factory worker for Athens-based Condor Chocolates, took chocolate lovers of all ages on a tour of the Condor factory in the Chase Street Warehouses on Saturday morning.

During the tour, Lord explained the process of creating chocolate step-by-step, from the cacao pod in Ecuador all the way to the wrapped candy bar in your check out bin at Whole Foods.

Guests tasted samples of chocolate in multiple forms — 80% dark chocolate bars, coffee chocolate bars, hot chocolate drinks and even half-processed, liquified chocolate — while learning about the immense amount of thought and work that goes into each bite of the sweet treat.

Condor Chocolates sources their cacao specifically from Ecuador and has close working relationships with each of the farms from which they source their chocolate. Lord said he’s been to each co-operation and is in consistent communication with some of the owners.

“As far as we can get our hands on it and understand the quality of how they’re being treated down there, we’ve seen it to be very positive,” Lord said.

Once the cacao seeds arrive in Athens, the Condor factory employees individually sort, roast, winnow, grind, temper and form the chocolate, taking it from a hard, almond-like pod to a fully-wrapped candy bar.

“I pick every single cacao seed that we use,” Lord said.

There are a handful of machines, each used in different steps of the chocolate-making process. Many of these are prototype machines that are constantly being fine-tuned by the chocolateers themselves.

During the process, Condor tries to ensure that no part of the cacao seed is wasted. After winnowing the seeds, or removing the nibs from the shell, all of the shell casings are composted.

Lord gathered a handful of rubber scrapers after ushering the wide-eyed group into another processing room. He dipped the scrapers into what looked like a large metal mixing bowl of chocolate syrup and handed them to the guests to taste. He was showing everyone the grinding process, during which the cacao nibs are ground into a paste that is commonly called chocolate liqueur.

“This is our 76%, I’ve been working on this for the last three weeks,” Lord said as he handed samples out to the crowd. “It’s finally being made, I made like 130 kilos of it thus far.”

What many people may not know is that Condor Chocolates is completely peanut-free and are looking to be dairy-free in the near future. The factory is working on a way to recreate milk-chocolate without the milk.

The Smith family enjoyed the tour and learned a lot about the process behind chocolate-making. Ingrid Smith asked her grandmother, Linda Smith, if they could make chocolate together, so Linda Smith searched the web and discovered the factory tour.

“My favorite part was where he put his tray underneath the spiggets of chocolate and made the bar,” Linda Smith said.

She and her daughter-in-law, Betsy Smith, were impressed with Lord’s involvement in tinkering with the large machines, as well as the size and volume of the process itself.

“I thought it was a tiny, little hoodink operation,” Betsy Smith said. “This is huge. I mean, two tons of cacao beans, twice a year?”

July 20 was Condor Chocolates' last factory tour — the company will be taking a break from giving tours to being preparing chocolate for the Christmas season and will resume later in the fall.

Get cozy with us: The 5 best hot chocolates in Athens

Surrounded by fresh produce, flowers and music, lovers of the local food scene are invited t…

Drinking coffee and saving the environment do not have to be mutually exclusive passions. In today’s go-go-go culture, convenience often tops both judgement and efficiency, giving caffeinated beverage drinkers more opportunities than not to contribute waste for the sake of time. Here are a few environmentally friendly — and wallet-friendly — tips for coffee lovers.

Condor Chocolates to celebrate 5 years of business in Athens