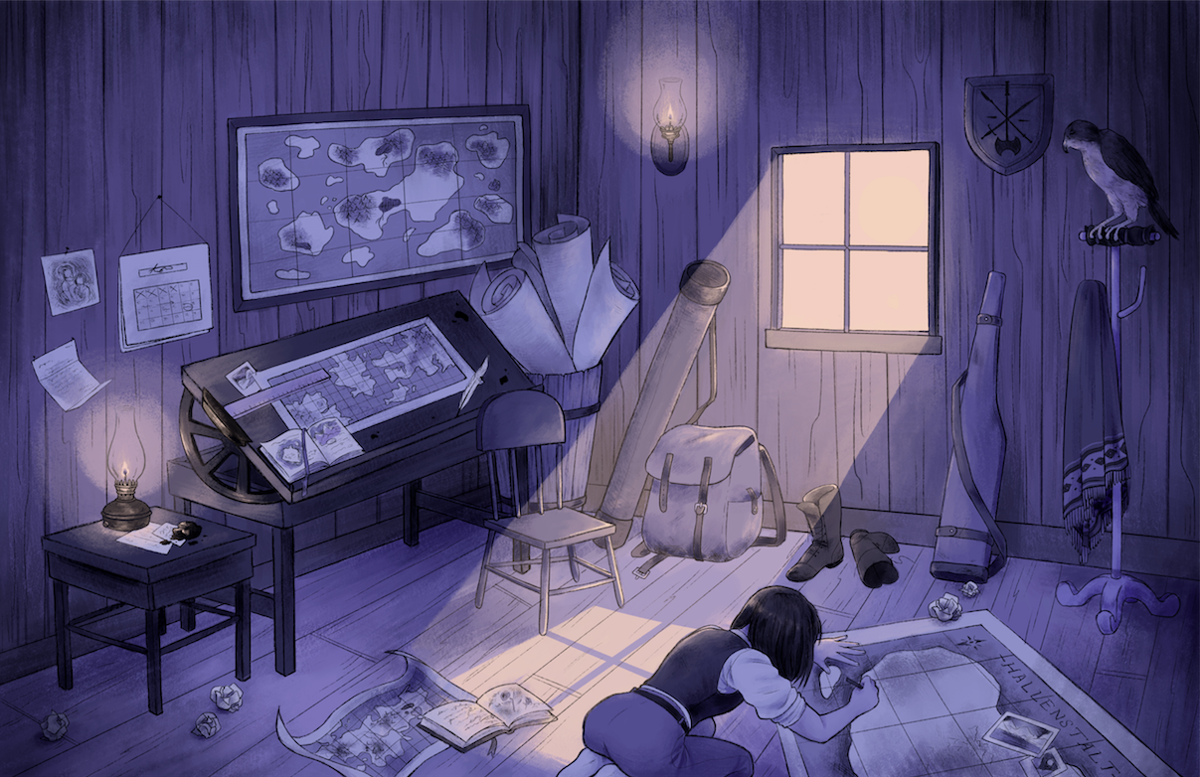 Artwork by Catalina Arnett entitled "Micah's Room," is one of many demonstrations of how Arnett showcases her graphic design talent. Catalina Arnett, a senior graphic design major at the University of Georgia, poses for a portrait.

Comic books and fantasy novels are not simply a childhood pastime for Catalina Arnett — they are her reality.

A senior graphic design major at the University of Georgia’s Lamar Dodd School of Art, Arnett has been able to take advantage of her full creative capacity and is striving to become a freelance illustrator.

Arnett attributes the source of her creative drive to reading a variety of comics herself, as well as watching videos of speed painting on YouTube.

Preferring the wide worlds of fantasy to modernism, her artwork tends to echo J.K. Rowling’s universe, along with other phantasmagoric fairy tales of her childhood. However, despite this influence, Arnett additionally allows traditional works to contribute to her style. She specifically enjoys Caravaggio and has redefined his initial implementation of shadowed, interpretive scenes to tell her own stories.

The ability to create expressive narratives has always been a priority to Arnett, so the majority of her works contain “chapters” which evokes a desire to actively participate in each scene.

“I would like the viewer to just enjoy [the narrative] or to come up with their own idea of what’s happening in the scene,” Arnett said.

Both Arnett’s attention to viewer participation and mastery of the interplay between art and viewer truly set her portfolio apart.

Arnett describes the creation of her pieces as an overall enjoyable process and said it allowed her to explore not only “different parts” of herself, but of the “worlds” she creates in her mind.

Miriam Mokhemar, a senior international affairs and Arabic double major has been a witness to Arnett’s progression as an artist for over three years.

Mokhemar said she is still baffled by Arnett’s enormous and seemingly perpetual dedication to her craft. This dedication even occasionally extends to Arnett prioritizing art above other activities such as eating and sleeping, according to Mokemar.

While Arnett prioritizes her art now, it was not necessarily always the case as she originally had applied to UGA as a biology major.

It wasn’t until Arnett encountered a general chemistry course that she considered illustrating as a full time sustainable career.

After switching her major to psychology, she was once again challenged with the life-changing decision of choosing a career path.

Arnett acknowledged art, and more specifically graphic design, was where her true passion could be realized. She was originally daunted by the prospect of leaping into yet another major and was fully aware of the negative stigmas surrounding art-driven careers.

“I would love to do illustration soley and major in drawing or something but honestly, it’s a little intimidating,” Arnett said. “It’s kind of hard going to your parents and being like, ‘Hey, I wanna just do art.”

After getting accepted to the Graphic Design area program at the Lamar Dodd School of Art, she is confident she made the right decision.

“Obviously, you need doctors, you need scientists, you need all that, but the arts are the thing that makes life worth living,” Arnett said.

Arnett firmly believes academics, creativity and technology go hand in hand. While Arnett’s journey as an artist started with traditional materials, she currently uses digital platforms to create her masterpieces primarily due to the cost.

For Arnett, along with other up-and-coming artists, the inexhaustible arsenal of materials which accompany the various programs they use is a phenomenal method to ensure a steady production of work, even when they are not selling pieces. While initially viewed as a “cop-out” craft, Arnett said digital art has recently made a breakthrough and is recognized as a different medium with its own set of challenges.

After graduating, Arnett hopes to pursue freelance illustration or find a job at a graphic design firm, in addition to formatting and designing layouts.

“Catalina is one of the most hard-working artists that I’ve met,” Rebekah Rutledge, a friend of Arnett, said. “She puts her all into every piece that she creates regardless of how big or small it may be.”

The “Harry Potter” series is the gift that keeps on giving, and its newest spinoff comes in the form of a “Pokemon GO” style mobile game. If you’re a Potterhead living in Athens, here’s what you need to know about “Harry Potter: Wizards Unite.”

As August comes to an end, students are back eager to get back into the routine of life in Athens. One of the best ways to return to normalcy …

As the weekend approaches, The Red & Black has compiled a list of the need-to-know events happening on campus and throughout the city for …

When you shift your gaze off the football field to the over 90,000 fans gathered in Sanford Stadium each home game, you’ll encounter a sea of …

On the eve of Labor Day weekend this year, many Athenians of all ages poured into the Georgia Theatre to hear former American Idol runner up, …

Taylor Swift is undoubtedly one of the most successful entertainers of our time. The 29-year-old singer-songwriter released “Lover,” her 7th a…

Fall in Athens is has many things to offer, whether it be University of Georgia football, Autumn-themed food or its array of musicians to perf…

Simultaneously being two different people is a challenge,  Reagan Floyd, a fifth year graphic design student at the University of Georgia’s La…

Despite modern culture forcing a widening gap between STEM and creative fields, a select group of students are transcending barriers to bridge…

From the perspective of an outsider, the world of creatives can be easily split into successful professionals and everyone else. But this does…

One of the many purposes of art is to be evocative, or as Ellen Roberts, a senior drawing and painting major at the University of Georgia woul…

Studies say taking a daily nap could benefit your heart

If you think that skipping the gym to take a nap is lazy, think again.

Shoes to store: How Kristen Ashely MacCarthy created the K. A. Artist Shop

Despite being a hub for creative minds as well as the “go-to” supply store for art students in Athens, the origins of the K. A. Artist Shop an…

Artist of the week: Bishop Bryant's journey to finding euphoria and understanding through music