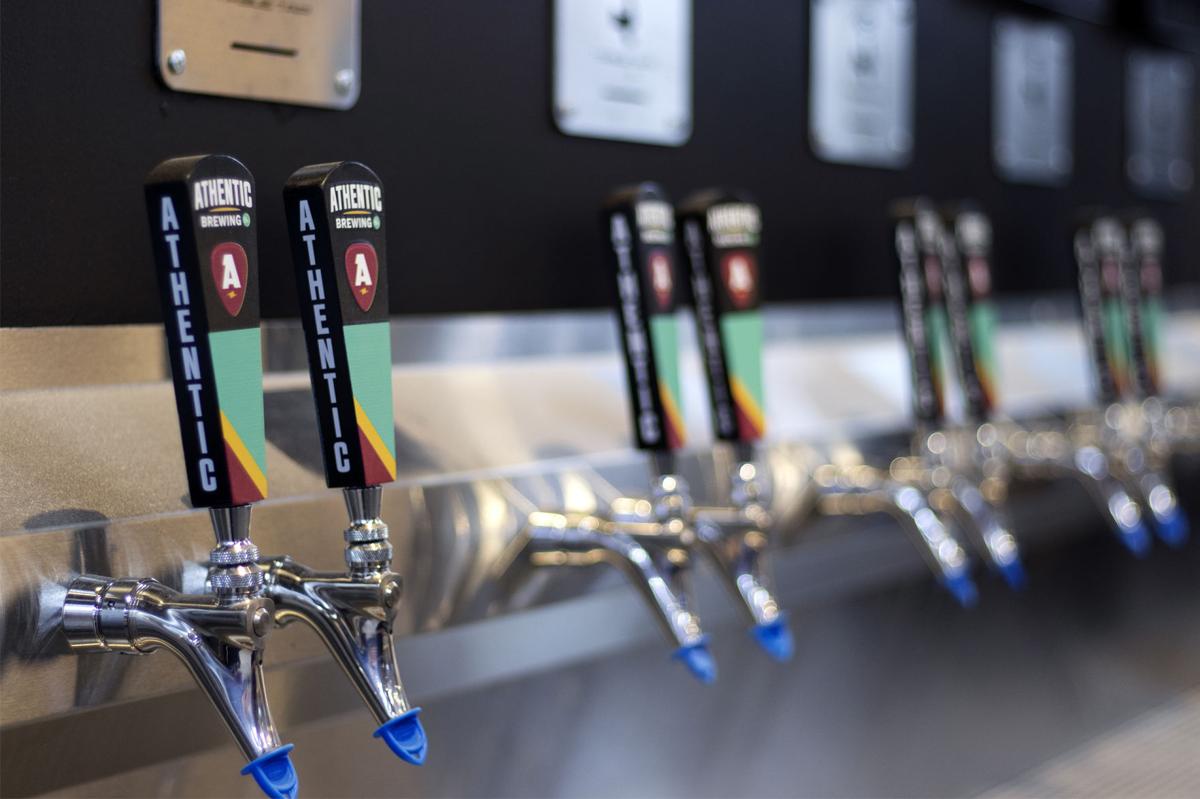 The beer taps at Athentic Brewing Company in the Normaltown area of Athens, Georgia, on Friday, Jan. 31, 2020. (Photo/Caroline Barnes) 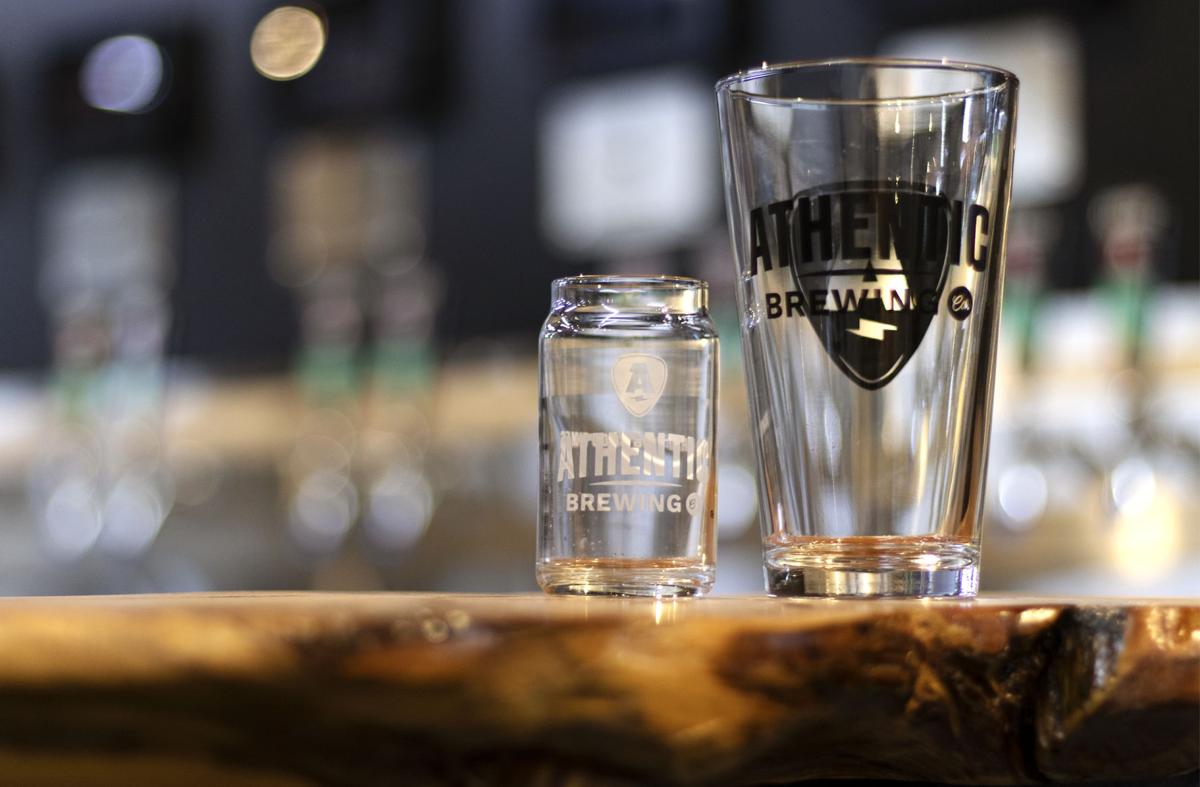 Two glasses sit on a bar by the beer taps at Athentic Brewing Company. (Photo/Caroline Barnes) 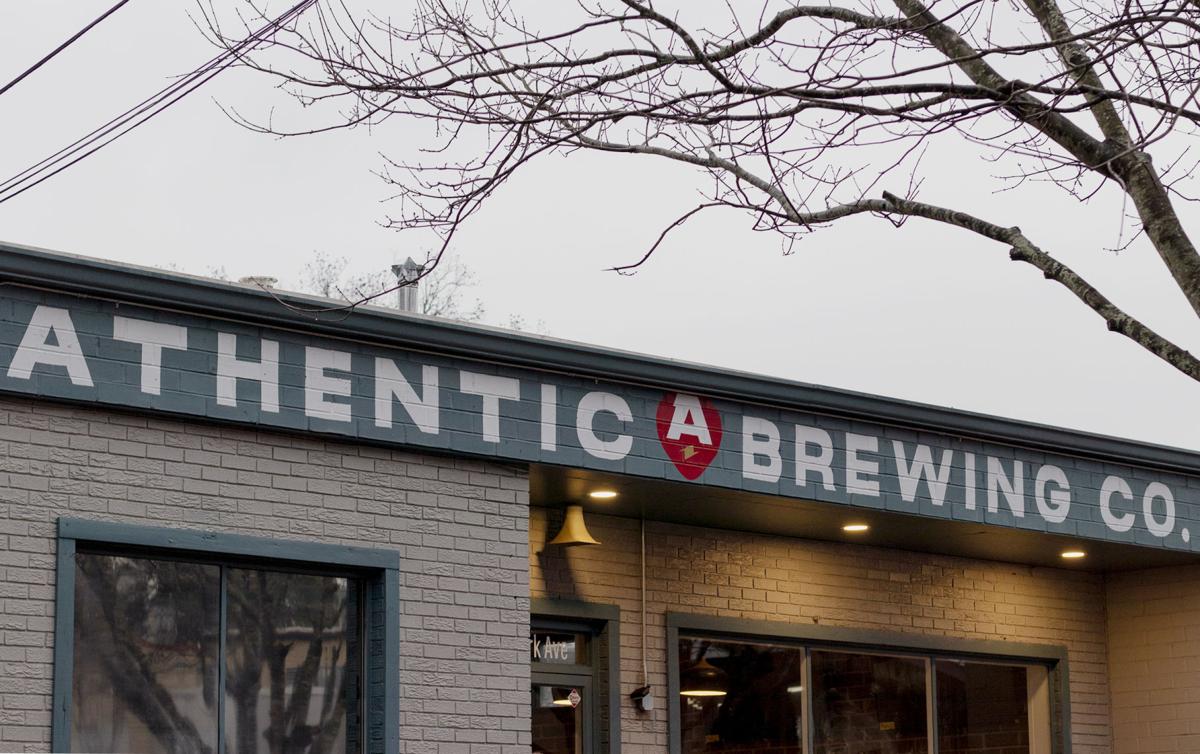 The exterior of Athentic Brewing Company in the Normaltown area of Athens, Georgia. (Photo/Caroline Barnes)

Paul Skinner and Mark Johnson are trying to figure out a way to lift two refrigerator crates into their facility without tracking any more mud inside. A patch of red sludge lays ahead of them, and they must cross a makeshift bridge of other upturned crates to hit the front door.

Athentic is poised to become the first brewery in Normaltown and the first in Athens with a self-serve taproom. The brain-child of industrial microbiologists Skinner and Johnson, the Park Avenue microbrewery has delayed its opening from a tentative date in fall 2019 to the foreseeable future — though “March is not unrealistic at all,” Skinner said.

The main factors in its delay are coordination challenges for the completion of its parking lot. The Athentic storefront is part of the Park & Prince redevelopment project spearheaded by JOMA Construction and Smith Planning Group, which will encompass preserving the Walgreen's on Prince Avenue, adding new ground for retail or restaurant spaces and adding a parking lot for the brewery.

“We’re not the only construction project in town,” Johnson said. “You don’t have to go very far down Prince Avenue to find more construction, and so there’s only a finite number of people who can do this work. If they’re not here, you can bet, if it’s a nice day, they’re somewhere else.”

The construction delay is a factor of deciding to open up a brewery in Normaltown, which both Skinner and Johnson do not regret. The owners pride themselves on the location — the Normaltown storefront was the key to their strategy of “being a local hangout, a local community-focused brewery,” Skinner said. The location also allowed for on-site parking, which was a huge selling point.

In the meantime, Athentic is keeping busy. The team has installed the Table Tap technology necessary for the self-serve model, recently completed the first round of hiring for taproom staff, added a small stage to the back of the event space and are “trying to keep our name involved in conversations with other organizations in town,” said marketing and events coordinator Kimberly Wise.

The inside of the brewery is immaculate and new — a large lobby space stocked with merchandise opens up into a bright, industrially-lit taproom with high tables, benches and a red couch. Three televisions covered in plastic hang above the 12-tap self-serve wall, with enough space for 12 additional taps the team anticipates adding after its initial opening. A garage door adjacent to the stage opens up to a handicap-accessible patio space “wide enough to accommodate a food truck,” Skinner said.

The space is designed to be as streamlined and accessible as possible. Skinner and Johnson chose the self-serve technology to eliminate the long lines they observed forming at other breweries and provide customers an increased sense of autonomy with what brews they choose to taste.

Though the craft beer industry is booming, there really isn’t a bubble of competition, Johnson said. The staggered additions of breweries only benefit Athens’ craft beer scene and drive up brewery tourism. Johnson notes the irony of thinking five breweries is “a lot” when other large Southern cities such as Asheville, North Carolina or Knoxville, Tennessee currently sustain around 30.

The breweries in Athens all operate on different models and each has its niche market — from large-scale distribution efforts at Terrapin to Akademia’s smaller brewpub-focused model. One can go into Athens and experience all different scales across craft brewing, Skinner said.

Early on, Athentic shared a close relationship with Akademia: as a part of Athentic’s prize package for winning the 2017 Athens Homebrew Classic, Akademia provided some of its space for Athentic to brew its first commercial beer, Bold-Faced Rye. The space grew into a collaborative environment for “talking about beer, making beer, thinking about beer. Everything was beer,” Skinner said.

“I know that once we open, [other breweries] will be our biggest fans,” Wise said. “There’s really no animosity and no competition — it’s all about growing and enjoying the product.”

In terms of community support, Athentic wants to pay-it-forward: the brewery envisions itself collaborating with other homebrewers or interested groups (Skinner mentions the possibility of “brew days” for bachelor or bachelorette parties) to put guest brews on tap and supporting other breweries in any capacity they can.

Though hyper-focused on opening, the Athentic team is looking toward future involvement and collaboration with local art and music communities and charitable organizations. The brewery partnered with Historic Athens to serve as a sponsor for the 2019 PorchFest and announced it will sponsor the Storage Squad Racing bicycle collective for its upcoming race season. In the brewery itself, a broad wall connecting the lobby to the taproom was left purposefully blank to fill with local art, and the interior stage was implemented to attract performers in the area.

Skinner and Johnson plan on representing the brand at the 25th Annual Classic City Brewfest in April, but they don’t want to get ahead of themselves. After all, it’s a waiting game: “I have a hard time seeing past the next day, the next week,” Skinner said.

Upcoming festivals in Athens to get you through June

As summer weather slowly approaches, so do outdoor festivals in the Classic City. From bike …

Downtown Athens has an estimated amount of 80 bars in one square mile. University of Georgia…

For 36 hours, from Friday evening to Sunday afternoon, approximately 500 coding aficionados will flood the rooms of the Zell B. Miller Learnin…

The Red & Black has compiled a guide of where to find music in Athens on Feb. 6-8.

Today on The Front Page Podcast, we talk about The Healing Circle, a support group for black women in Athens. We are joined by the group’s founder Shawntell Pace and facilitator Tinesha Pelham. They speak about their perspective about black mental health and why they saw a need for a support group.

Nicole Paige Brooks was the first "RuPaul’s Drag Race" contestant to perform in Sister Louisa’s Church Bar and the first Georgia queen to ever compete on the show.

Out with the old, in with the new: from the pizza chain to the Atlanta Highway ice cream shop, here are four restaurants that experienced quie…

The social network: Local pagan groups welcome all with a desire to learn

The Athens Area Pagans meet every Saturday to chat about their weeks, what’s irking them and, generally, all things related to paganism.

After miles and miles driven to county fairs, Greek events and farmers markets, Nedza will open its first brick-and-mortar store.

Coming soon to Ciné: Events and screenings you won’t want to miss in February

The Red & Black has compiled a list of upcoming events and screenings at Ciné to provide you some entertainment over the upcoming spring season.

On a chilly Valentine’s Day evening, Colony House, an alternative rock band from Franklin, Tennessee, made a stop at Georgia Theatre.

Fiber art pieces by local artists Barbette Houser, Heather Elisabeth and Paula Runyon will fill the Tiny ATH Gallery on Feb. 21 for a group exhibition to highlight the versatility of textile design.

Whether dreaded or welcomed, Mercury entered its retrograde state for the first time this decade on Feb. 16.

Barberitos to celebrate its 20th anniversary on Feb. 20

Stars of 'Napoleon Dynamite' to hold discussion at The Classic Center

The stars of the indie sleeper hit “Napoleon Dynamite,” known for its bizarre, deadpan comedic moments, will moderate a discussion about the film after a screening at The Classic Center.

The brewery, adjacent to the Athens Cotton Press, is the fifth to open in Athens, the first in the Normaltown neighborhood and the smallest in the city.

March concerts in Athens you won't want to miss

The Red & Black has compiled a list of upcoming shows in March that you won't want to miss.

March screenings at Ciné to kick off your spring

The Red & Black has compiled a list of current and upcoming screenings at Ciné during the first month of spring.