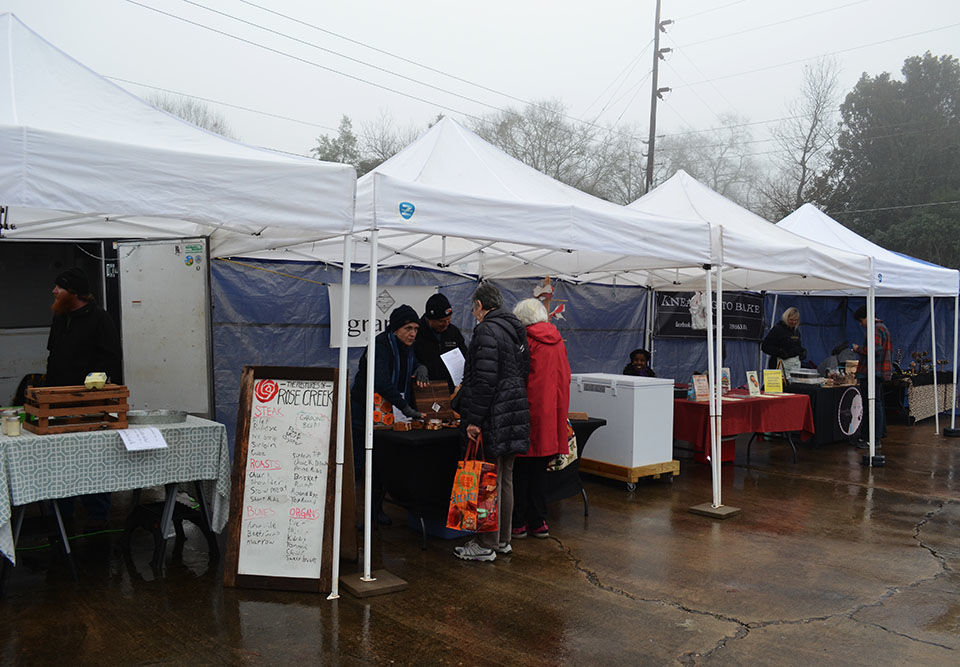 The Athens Winter Farmer’s Market opened this January and stays open each Saturday till March 9th. The vendors include locally owned farms and businesses that believe it is important to have a winter market to bring additional income during the winter season and allow regular market shoppers access to their products. (Photo/Maya Giro) 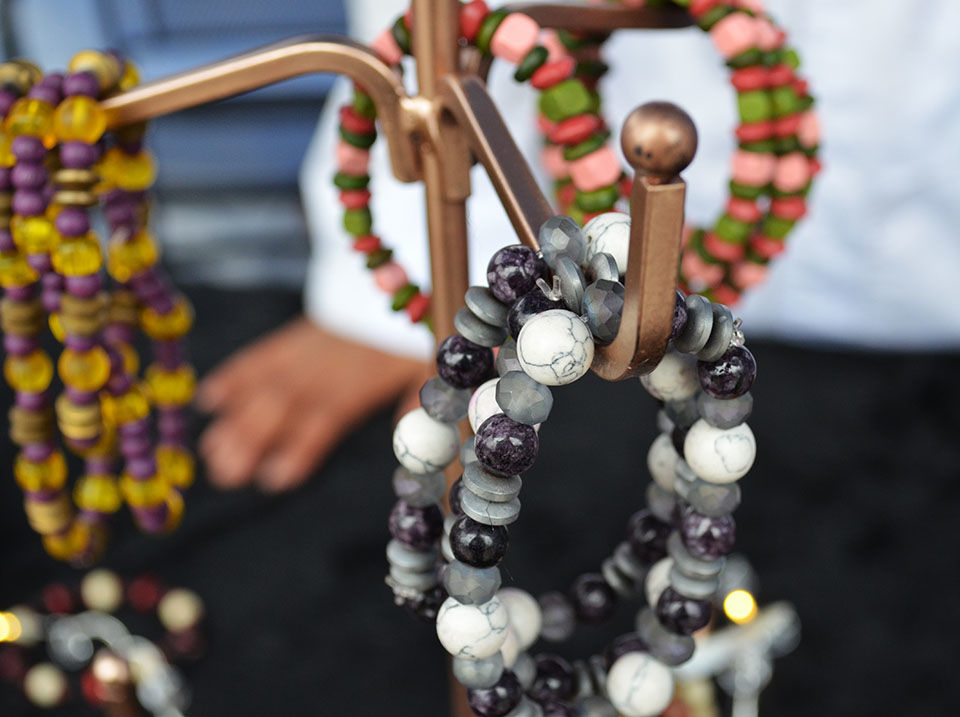 Jonelle Dawkins, the owner and jeweler for Joforia Jewels, is a current senior at the University of Georgia studying Fashion Merchandising. After completing a study abroad program in Ghana she was inspired to keep making jewelry and started her jewelry business. (Photo/Maya Giro)

Will Powers, a graduate from the University of Georgia’s College of Agriculture and Environmental Sciences, is the farm manager of The Pastures of Rose Creek farm. Powers is a fourth-generation farmer from Watkinsville, Georgia, and his farm houses are pasture-raised, grass-fed beef and chickens as a sustainable small-scale farm. (Photo/Maya Giro) 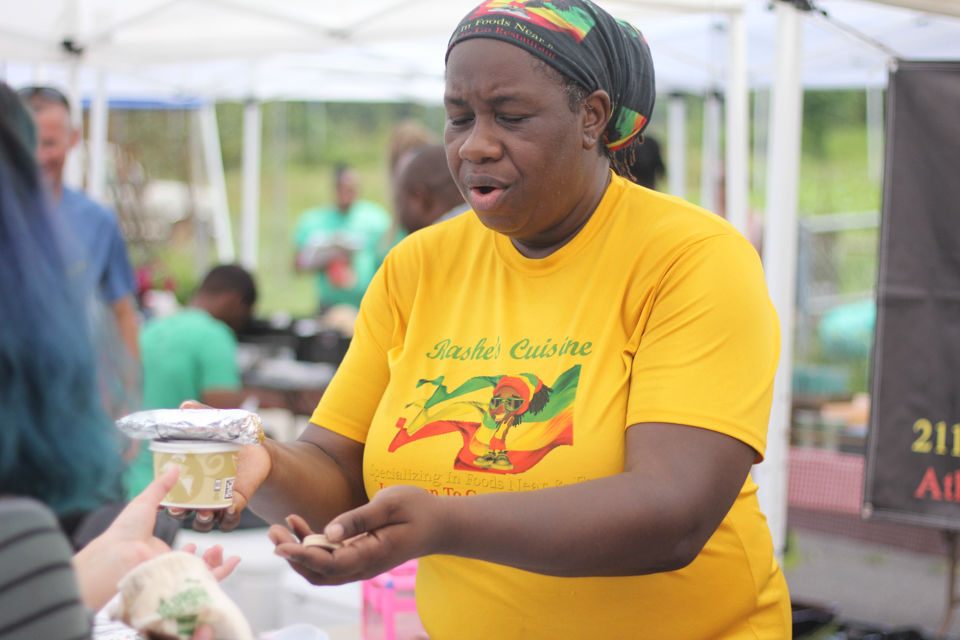 Many Athens community members have a enjoyed a weekend morning spent at a farmers market, supporting local businesses. However, most of these take place between spring and fall, leaving an annual gap during the winter. The Athens Winter Community Market aims to fill that hiatus for vendors and customers alike.

The Winter Community Market, which runs Saturdays from 11 a.m.-3 p.m. from January to March, was conceptualized by Rashe Malcolm, the owner of Rashe’s Cuisine.

Malcolm is also the director of the Culinary Kitchen of Athens, a group that aims to support small businesses. As a small business owner herself, she has firsthand knowledge of the benefits of vendor’s markets to local businesses.

“For me as a vendor, it allows me to be more hands on — more personal,” Malcolm said. “You can’t really do that in a restaurant setting.”

Malcolm added that markets provide an opportunity to attract business outside of her core audience, including tourists who visit markets.

Malcolm said she realized she knew many vendors every year who were unsure of where they would sell during the winter.

The Winter Community Market hosts a variety of vendors, including those who frequent either the West Broad Farmers Market, or the Athens Farmers Market and even vendors who operate without storefronts.

“It’s kind of the purpose of the market to bridge that gap between all the summer markets,” said Trent Walls, owner of Cosmic Delivery, one of the sponsors of the Winter Community Market. “Vendors still have a place to sell goods when there’s less available that’s fresh.”

Walls added that farmers have this season built into their cycle, but vendors who sell crafts or other goods benefit from an additional source of income year round.

“What Rashe does is she really brings together the community,” said Matthew Epperson, who directs the Daily Groceries Co-op, another sponsor of the market. “She’s always said that women of color are the ones who are leading a lot of entrepreneurship these days in Athens.”

One of these businesses is VTasteCakes which sells low-calorie, vegan cupcakes that incorporate vegetables.

Wendy Reddicks, whose daughter started the business, said she and her daughter sold at the West Broad Farmers Market during the summer, where they met Malcolm.

“We knew Rashe from West Broad Street,” Reddicks said. “So when she said, ‘I’m opening up,’ we were like, ‘Oh yeah, we’re coming with you!’”

According to Reddicks, the vendors are all friendly with each other. Kevin Aland, an employee at the Pastures of Rose Creek, had similar feelings.

“It seemed like a good group of people that were trying to get it together,” Aland said. “We wanted to help out by bringing our regulars to it.”

The market also provides an ideal environment for vendors without storefronts.

“Pop-ups are more experimental,” Walls said. “The pop-up format allows you to be always experimenting, try something new.”

This relaxed, pop-up environment was a draw for Fonda Bowles, who usually sells nail wraps online.

“This one was a great price — with other events, you can end up losing money,” Bowles said, referring to the required deposit for vendors. “If it’s not feasible to make a profit, I’m not going to go to it, so this is a good opportunity for a bunch of people to get out that normally wouldn’t get out.”

James Blake has always been sort of a hidden treasure. His vocals range from deep, crooner-l…

Big surprise, this decked-out game room is seen as a positive change across the board.

Tuesday, Jan. 22, Karl Denson’s Tiny Universe will be performing at Georgia Theatre as a sto…

In the hectic world that is the Tate Student Center, Sambazon Organic Açai is one option tha…

On M3Yoga’s website, four pillars are listed as foundations to the business: “inclusivity, c…

When Krish Mohan was 16, his friends convinced him to try out for his school’s talent show. …

Weddings, often seen as one of the best days of an individual's life, are a ceremony meant t…

JanFest, an annual band festival organized by heads of the University of Georgia’s music dep…

Relay for Life's Battle of the Bands, hosted by D'Andre Swift and J.R. Reed, vows to 'fight cancer'

If there is anything Sarah Henning, the executive director of Relay for Life at the Universi…

In 1963, Martin Luther King Jr. wrote a letter from his jail cell in Birmingham, Alabama, wh…

Approaching the corner of Washington Street and North Hull Street, crowds of people of all walks of life come into view, ranging from young fa…

During the summer, the majority of children are out of school and not concerned about the upcoming academic year. Often children lose the know…

With a new year comes new accomplishments, and one student at the University of Georgia is setting the bar as the first student from the unive…

From a bar in the rural south to the main stage, The Steel Woods have stayed humble and true to their roots throughout their time as a band. T…

As night falls on the University of Georgia’s campus, the basement of the fine arts building is alive with undergraduates bustling to produce …

About a year ago, sophomore Susannah Couch had no idea how to samba or salsa. That changed when she stepped foot into a Friday night dance par…

The Classic City is home to Creature Comforts Brewing Co., a staple to many Athens locals and beer connoisseurs. The brewery released 26 new b…

Eden’s Cafe had a test run as a pop-up at Hendershot’s Coffee before securing its own location on Broad Street.