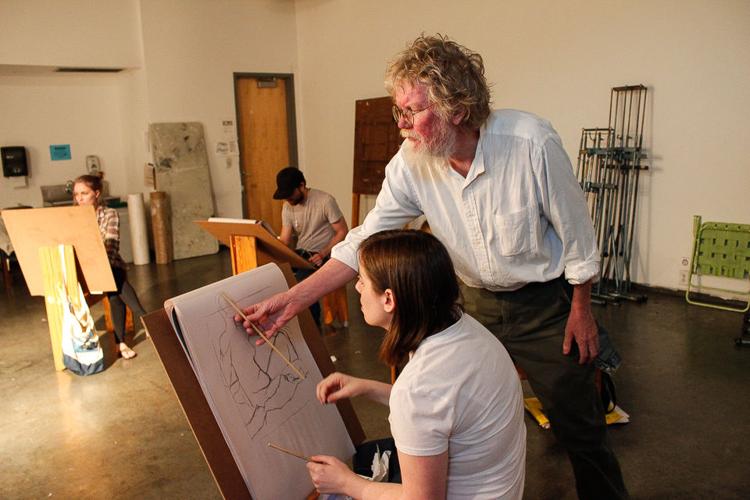 A teacher at the Lamar Dodd School of Art teaches a class at the University of Georgia in Athens, Georgia, on Thursday, October 5, 2017. (Photo/Mauli Desai) 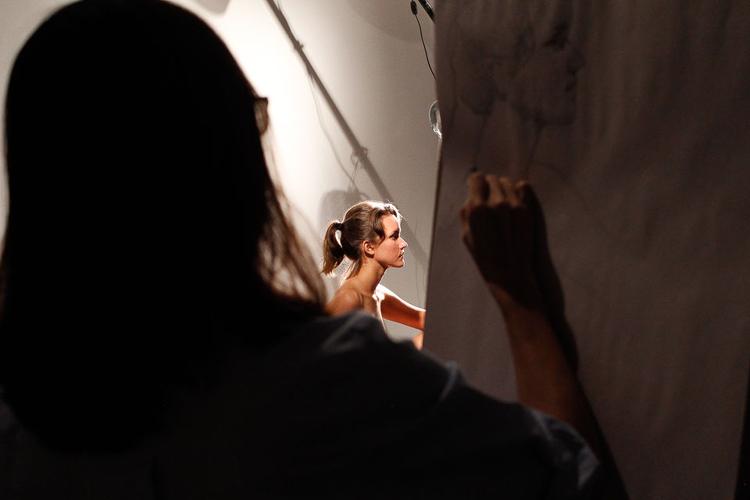 Sarah Aldama, a junior studying architectural history, poses during an art class at the Lamar Dodd School of Art at the University of Georgia in Athens, Georgia, on Thursday, October 5, 2017. Sarah is a strong advocate for body positivity. (Photo/Mauli Desai) 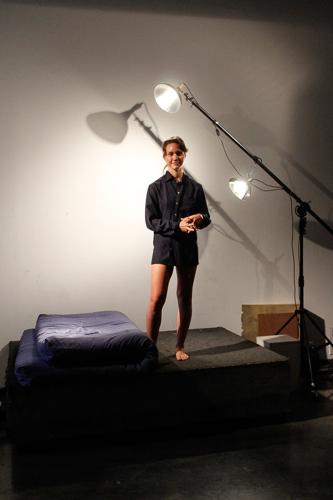 Sarah Aldama, a junior studying architectural history, stands during an art class at the Lamar Dodd School of Art at the University of Georgia in Athens, Georgia, on Thursday, October 5, 2017. (Photo/Mauli Desai)

In an asymmetrically-lit room with paint stains on the floor and stacked easels in the corner, class starts as the model disrobes and a symphony of charcoal and graphite gliding across paper begins to play.

The model is illuminated on a platform with students — some sitting, some standing, some kicking off their shoes to settle in — positioned in an arc around the model, translating the shapes and shadows from the model’s naked body onto the paper in front of them. One of the oldest forms of art and anatomical appreciation is preserved and celebrated through the nude modeling program in the Lamar Dodd School of Art at the University of Georgia.

“If you study art, the first thing you learn to do is to stop viewing things as things. You start viewing them as combinations of light and shadow. That is all we are seeing, a combination of light and shadow and where one ends and the other begins,” said Kat McCormack, a third-year history student who modeled nude for a semester.

The models in this program come from many different backgrounds, from dancers and art historians to athletes and even exercise and sports science majors.

Zack Carlton, an exercise and sports science major, described his first class as similar to the first drop in a rollercoaster.

“It seems abstract filling out the paperwork, just like another job, but then, like, five minutes before the class starts, your heart is beating really fast and then it's time to start. It was like on a rollercoaster when you first drop off the hill. When you drop the robe and step up on a well-lit platform, it feels like that,” Carlton said.

"It was like on a rollercoaster when you first drop off the hill. When you drop the robe and step up on a well-lit platform."

For Sarah Aldama, a junior studying architectural history, her first time had a similar initial thrill to it.

“I was really nervous my first time. It is like your first kiss or when you lose your virginity. It is being completely vulnerable to someone else — in this case, it is just a classroom of people,” Aldama said.

After overcoming the first few minutes of nerves, the models said the transition from consciously fixating on the fact that you are naked and that strangers are looking at you naked for the first time, to the meditative mindset of serving the purpose of art education as a live body, takes place as the model begins to settle in.

“You are just standing there and after a while you don’t feel naked. You’re just your own person, in your own skin and you just stand there and say ‘This is me,’” Aldama said.

“There is a real difference between being naked and being nude. Being naked, you are about to offer your entire being, all vulnerabilities. But when you are nude, it is more just the surface level,” Andino said. “I think that surface level is what you are offering and a lot of people are still unlearning all of the connotations with just not wearing clothes.”

McCormack said they experience a similar dissociation between differing contexts of being naked.

“The biggest thing that you feel is that you are not a sentient being at all. Everyone is viewing you not as a sexual object, but as just an object. Nothing about your personality, nothing about who you are, is in the work that they are doing,” McCormack said. “You are getting stared at by all of these people and maybe even making eye contact with them and while in normal nudity that would be an intimate experience, it is very different.”

Through this program, experiences vary from person to person, but the end takeaway seems to marry well with the model’s ability to understand themselves and how others view them on a deeper level.

“The biggest thing that I came away with is that I look exactly how I thought I looked like. You have this tendency to morph your body into however you are inclined to just by staring at yourself long enough,” McCormack said. “After somebody draws you, all that boundary and protection from yourself or harm you cause yourself from how you perceive yourself is completely gone, you are just looking at the form of who you are.”

“After somebody draws you, all that boundary and protection from yourself or harm you cause yourself from how you perceive yourself is completely gone, you are just looking at the form of who you are.”

During the class, models can take five- to ten-minute breaks where they can put their robes back on and walk around the classroom to see what the artists have created so far.

This experience shows that no matter how someone sees themself, there is no control over how others are going to see them. For some models, this was a liberating feeling, though this liberation comes in different forms.

“I found liberation in that everybody around me is celebrating not me, but my body as a vehicle to understand their art better,” Andino said.

For McCormack, the relationship between their body and the way they feel is very different. McCormack identifies as agender and doesn’t feel attached to the way their body looks as female. Most of the time, they said they are not particularly enthusiastic about the fact that they have a womanly figure. In their mind, if they could, they would look a completely different way from the way they look as a woman now.

“I can’t escape that when someone sees me they are going to see someone with breasts and hips and that is fine,” McCormack said.

Being subject to the perception of others allows some models to be kinder to themselves and their own bodies.

“This was sort of a way to cement the fact that no matter what I look like, I am worth at least this much. I have this much value at least and I have a lot more respect for my body and how much my body can do rather than what it looks like,” said Savannah Guenther, a 20-year-old history and Native American studies major.

Similarly, Kara Joyce, a 21-year-old international affairs and English double major, is now able to more gentle with her body.

“It makes me a little kinder to my body. I am usually pretty harsh on myself,” Joyce said. “It is nice to know I look a lot more graceful than I feel.”

Sarah Aldama, a junior studying architectural history, stands during an art class at the Lamar Dodd School of Art at the University of Georgia…

Correction: In an earlier version of this article, Gabriella Andino's position was misstated. She is a museum interpretation intern. This has since been corrected.

We asked students from all kind of art backgrounds from music to metal work to engineering and studio art to find out what they think about the largest government-owned art studio being in North Korea.

From recycling to changing to a plant based diet to carpooling or biking around Athens, there are many ways that people can reduce their carbon footprint even with their busy college schedules. Composting is another way to help reduce food waste and production of greenhouse gasses like methane, and with its rise in popularity it is now getting easier and easier.

Athens Light the Night lights way to cure for cancer

Athens Light the Night is an event dedicated to celebrating cancer survivors, remembering those who lost their battle to cancer and raising money to find a cure.

Starting at 6 p.m. on Thursday, Oct. 19, downtown Athens will come alive with a variety of art performances for the 3rd annual Classic City Fr…

Retirement for many people can mean days at the golf course, quiet time with the family or a chance to pick up new hobbies. For one University of Georgia professor, retirement means writing parody and fiction novels.

Louis Conde: A UGA 'fitstagram' star in the making

Louis Conde’s draw to get into fitness started out like many others: to get himself into better shape than where he was at. However, Conde’s simple quest for physical self-improvement quickly turned into something much bigger than he could have imagined.

AthHalf half marathon brings together the community for youth art education

The 2017 AthHalf Athens, Georgia. half marathon kicked off at 7:30 a.m. on Sunday, Oct. 22 in downtown Athens off East Hancock Avenue. and finished across from the Lyndon House Arts Center off Hoyt Street.

Zombie Farms has opened its doors for the fifth year in a row with a new and improved storyline for their trail.

On Wednesday, Oct. 25, electro-funk therapy band Spafford will play at the 40 Watt in their first performance in Georgia. The show starts at 9 p.m., and tickets cost $15.

For Blind Pilot, the five years that elapsed between the release of “We Are the Tide” in 2011 and “And Then Like Lions” in 2016 were a time of personal change.

For 12 days, starting Nov. 1, somewhere between 22 to 25 thousand people will flock to the University of Georgia campus for a festival focused on the arts—the Spotlight on the Arts festival.