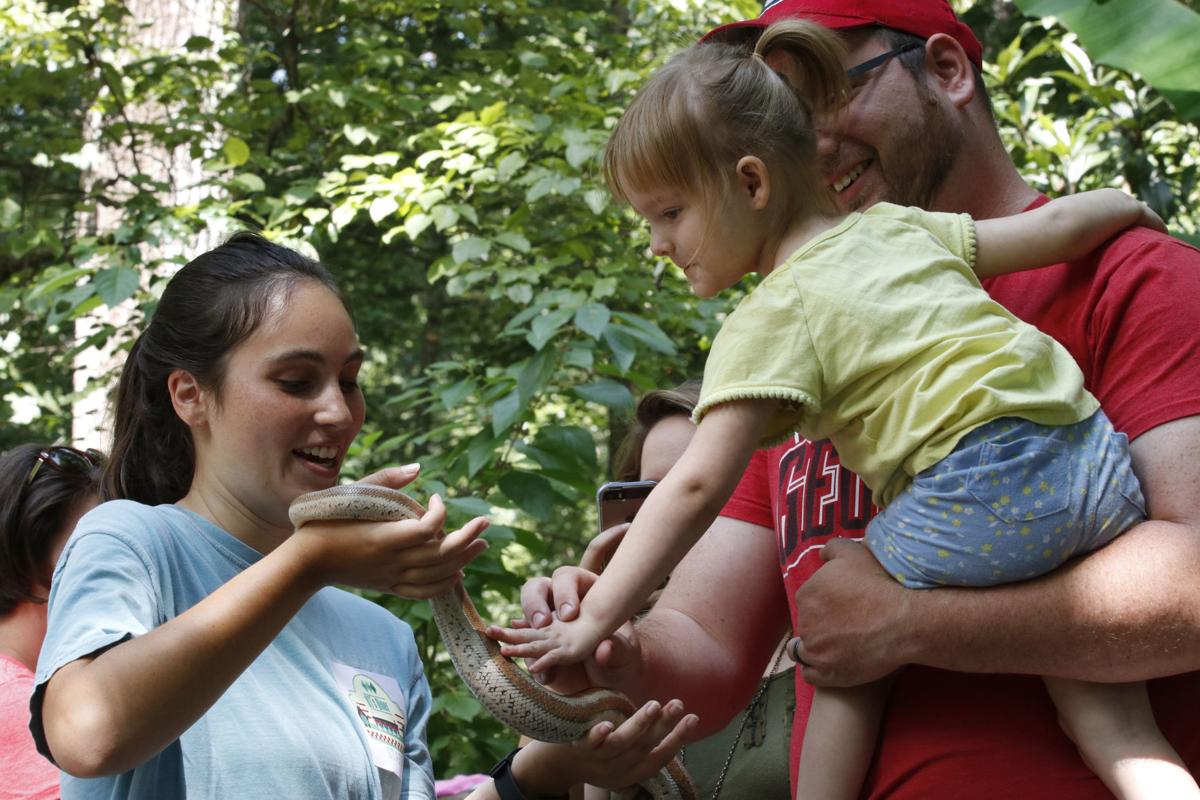 Addelyn Urtley carefully approaches the friendly snake on display while being held by her father. Volunteers of the Bear Hollow Zoo were stationed throughout the park holding several animals. (Photo/Daniela Rico) 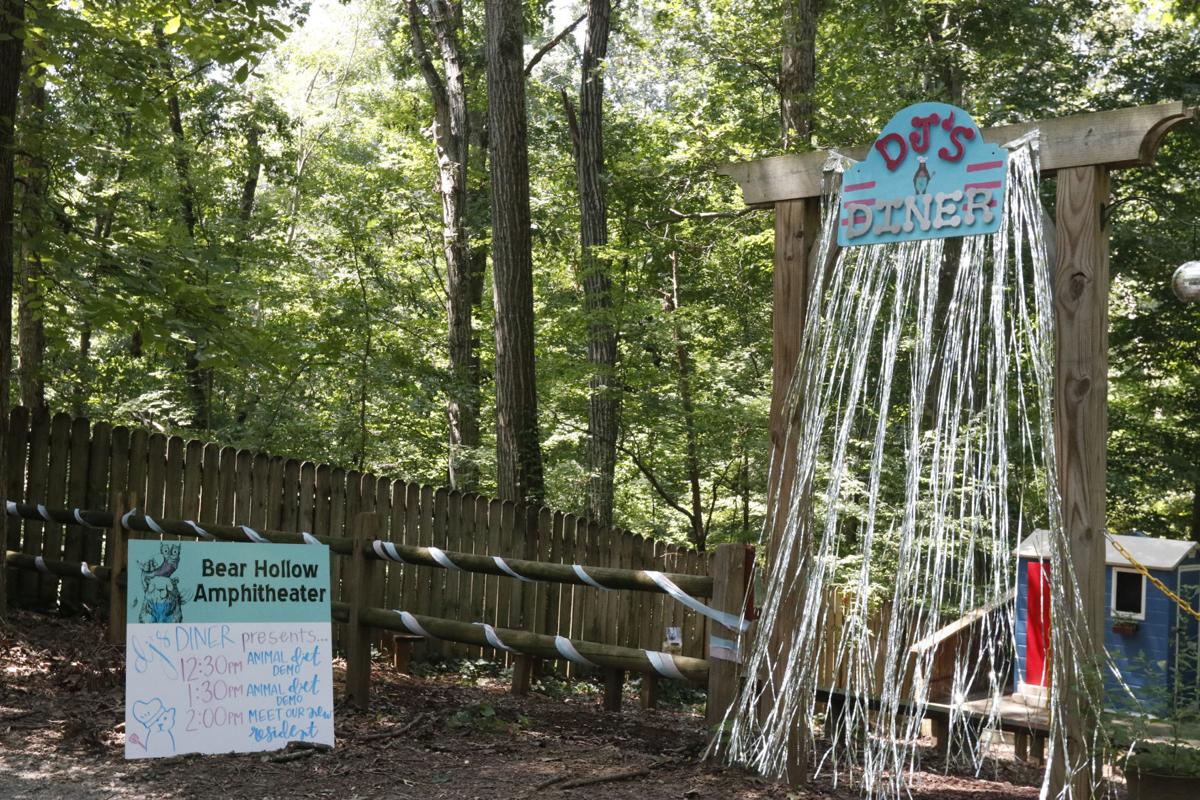 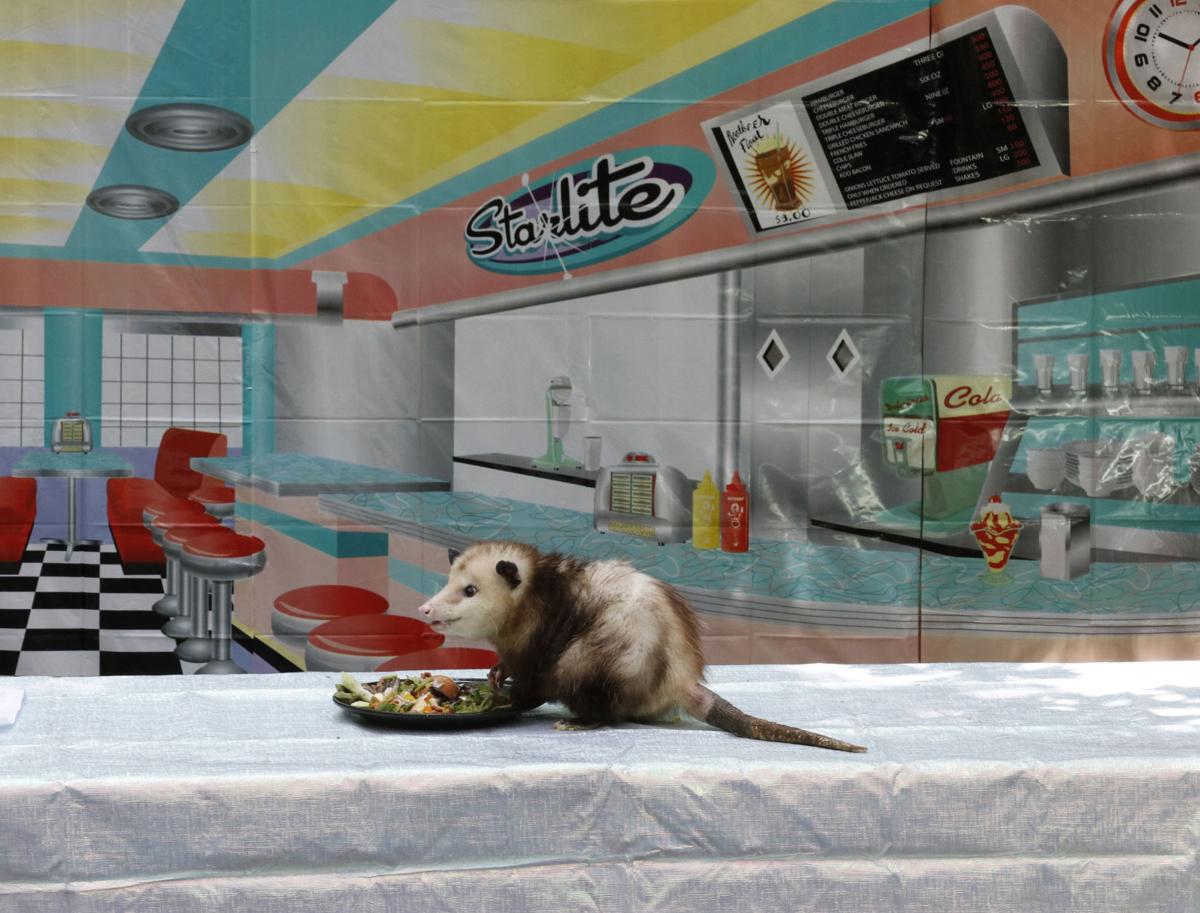 One of the resident possums of the Bear Hollow Zoo enjoys a mid-afternoon snack. Every hour, the volunteers at the zoo brought out an animal to feed and to show the crowd. (Photo/Daniela Rico; 704-287-0109) 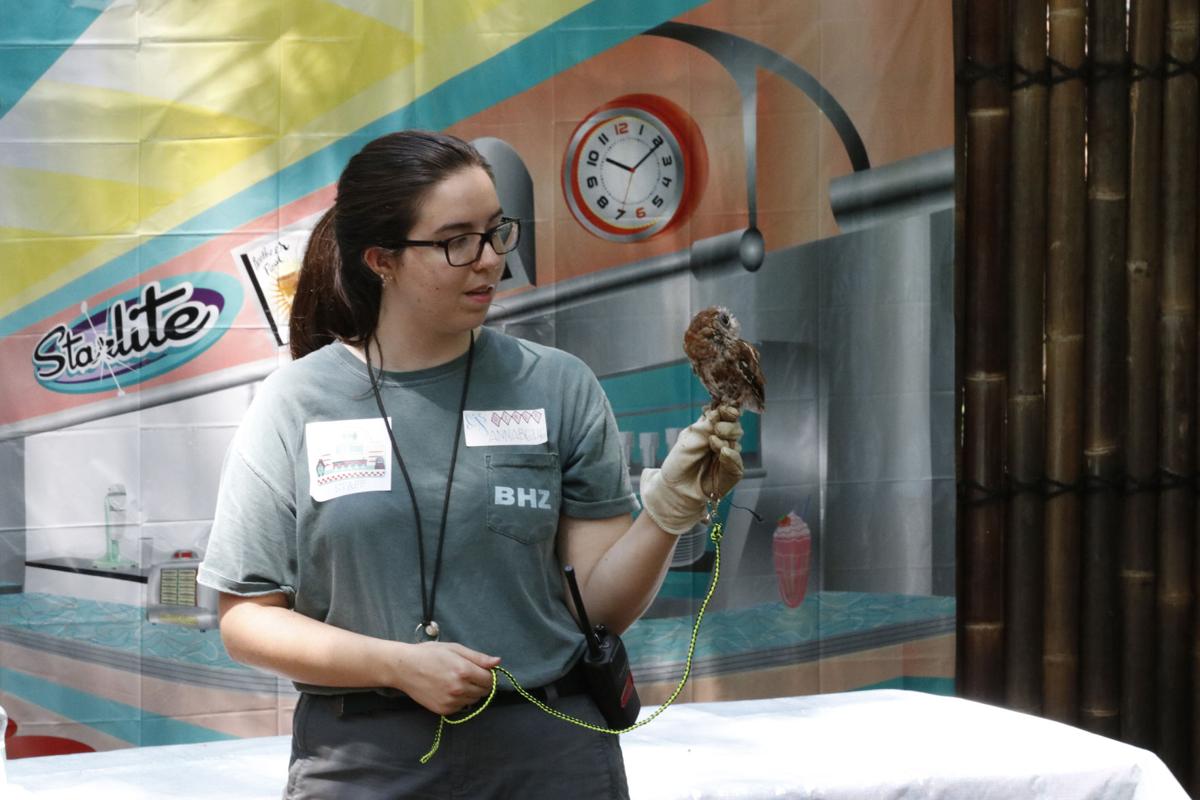 Annabelle, a volunteer at the Bear Hollow Zoo, holds a tiny owl for the crowd to see. The full grown owl is the newest resident of the zoo coming all the way from Gainesville, Georgia. (Photo/Daniela Rico; 704-287-0109)

Saturday afternoon many Athens locals waded their way through the trees and trails to Bear Hollow’s annual “Zoo Day”, where ‘50s retro decorations consumed the park. This year’s theme was “DJ’s Diner,” named after DJ, one of the bears in residence at the zoo.

Visitors could spot many of the staff in pink poodle skirts with bright pink glasses, with paper records swaying along the rails walking to the amphitheater. The day was filled with educational presentations of respective animal diets, craft stations, honey stations/ bee conservation stations, animal encounters and, of course, the various animal viewing exhibits that Bear Hollow has to offer.

The main events of the day were held in the amphitheater. During the “Animal Diet Demonstrations,”program specialist, Jen Benoit and volunteer DJ Dobbs taught audiences about the diets of some of the animals in residence. First up was the opossum Roomba, followed by a 40-year-old red-footed tortoise, Morrocoy, who both enjoyed a selection of interesting salads.

“We are under [Athens-Clarke County] Leisure and everyone does programs throughout the year. [Zoo Day] is a fun thing for the community to come out and do,” Benoit said.

The last of the demonstrations  introduced the newest resident of the zoo, Ponyo, the red eastern screech owl. Ponyo, who had been hit by a car, is now living with eye problems and head injuries and cannot hunt on her own. This means she will now stay with the zoo to be fed and taken care of. She was not bred in captivity, but cannot be released back into the wild as she would not survive, which is the case for the rest of the animals at Bear Hollow.

“All of our animals here have been deemed non-releasable for some reason or another. Some animals are missing eyes, or have wing injuries, so that’s why all the animals are here,” explained volunteer and University of the Georgia forestry student Megan McMillan.

McMillan and volunteer and UGA graduate Sylvi Oh ran the animal encounter portion of the day where visitors were able to get up close and personal with the animals, like Bear Hollow’s ball python Kaa.

Near the animal encounters were the different vendors who had come to set up booths at the event. These included organizations like the Sandy Creek Nature Center, UGA Entomology and the Georgia Museum of Natural History. At these booths, guests could find anything from a fox pelt to a Madagascar hissing cockroach.

“Obviously we have some materials out here — we assume that people who would bring their kids to ‘Zoo Day’ would want to bring their kids to the [Sandy Creek] nature center at some point,” said program leader for Sandy Creek Nature Center, Carmen Champagne. Champagne explained that the nature center and Bear Hollow are supporting each other in a majority of the events that they host, and have been vendors at “Zoo Day” for a very long time.

Another vendor at the event, Meg Abouhamdan, was someone that has been coming to Bear Hollow Zoo for as long as she can remember.

“I used to come here in the ‘60s to look at the bears — I lived right on Milledge Heights,”  Abouhamdan said. Abouhamdan has been volunteering at the zoo for five years and said that you can normally find her with the snakes,  calling herself the “snake lady.” She said the quality of animal conservation development is increasing astonishingly compared to years ago, stating that “it’s all about animal welfare.”

A common theme surrounding the day was that the health of the animals was the staff and volunteers’ main priority. Bear Hollow takes care of animals that are unable to be released back to the wild in addition to animals that are not native to the area that were most likely pets that were not well taken care of.

For example, Morrocoy the tortoise was given up because the owner did not realize that he would live that long and could no longer take care of him. Benoit stressed to the crowd at the event that when buying a pet, it’s important to do research so these animals are healthy.

“Zoo Day” was not just a day for kids to come to see the animals, it was a way for Bear Hollow to showcase their animals while also educating visitors on conservation, volunteering and the caretaking of the animals in their facility.

A poor quality video of a middle-school-aged girl filled the movie theater screen. She had b…

Involvement Fair held at different time, attracted larger crowd than in past

The word “grief” is often associated with loss of a loved one and a five-part process, but i…

For some, Aug. 24 approaches just like any other day out of the year. But for others—those w…

In the small studio room, the smell of coffee filled the air and attendees quickly made thei…

While most would run away at the sight of swarming bees, Doyle Johnson, local beekeeper and …

The Lyndon House Arts Center in downtown Athens will host “So It Goes,” an exhibition of loc…

Over the summer, many new restaurants opened in Athens, allowing people to explore new foods…

National Dog Day is Aug. 26, which means people have another excuse to show some extra love to their favorite furry friends. In honor of the s…

In an age of Snapchat and Instagram, people post "perfect" versions of themselves, leading others to compare themselves to this ideal. This comparison may cause depression, low self-esteem and other detrimental mental health effects.

Founded in 1967, Stillpoint Literary Magazine has highlighted students’ writing and art for 50 years. The magazine has undergone changes throu…

Great gigs: Booking professionals in Athens draw talent from all over the world

Athens is known for its slew of concert venues and the sheer amount of shows every night around town. The process of getting these shows plann…

Review: ‘To All the Boys I’ve Loved Before’ is the cheesy rom-com we all need

Romantic comedies can be very hit or miss, but people seem to enjoy the Netflix Original, “To All the Boys I’ve Loved Before,” released on Aug…

Families lined up outside of Memorial Park and Bear Hollow Zoo in Athens, Georgia on Thursday, Oct. 25, for their annual "Boo at the Zoo" even…