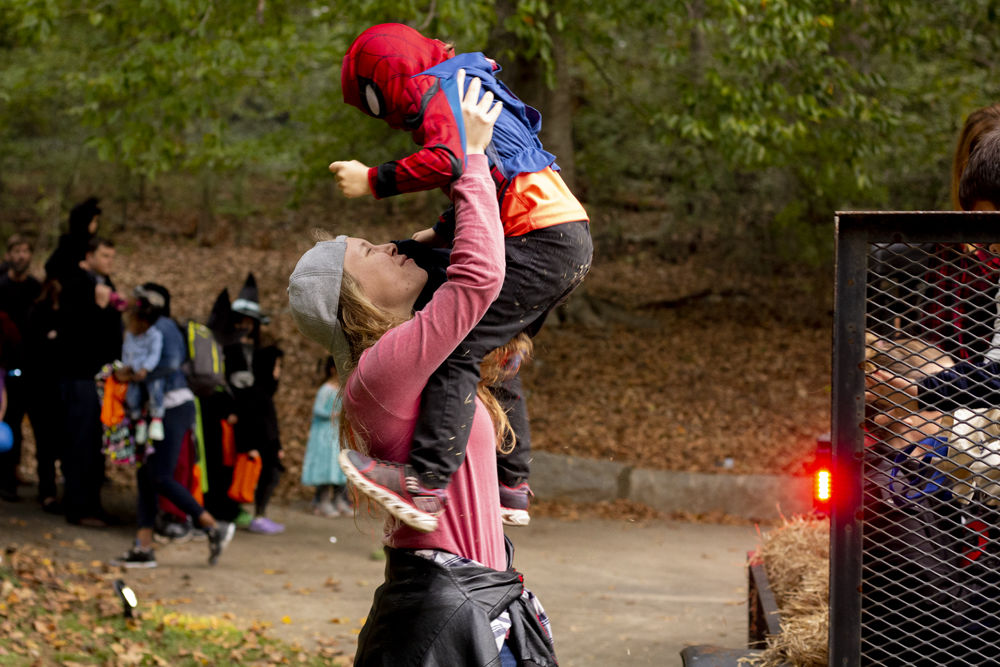 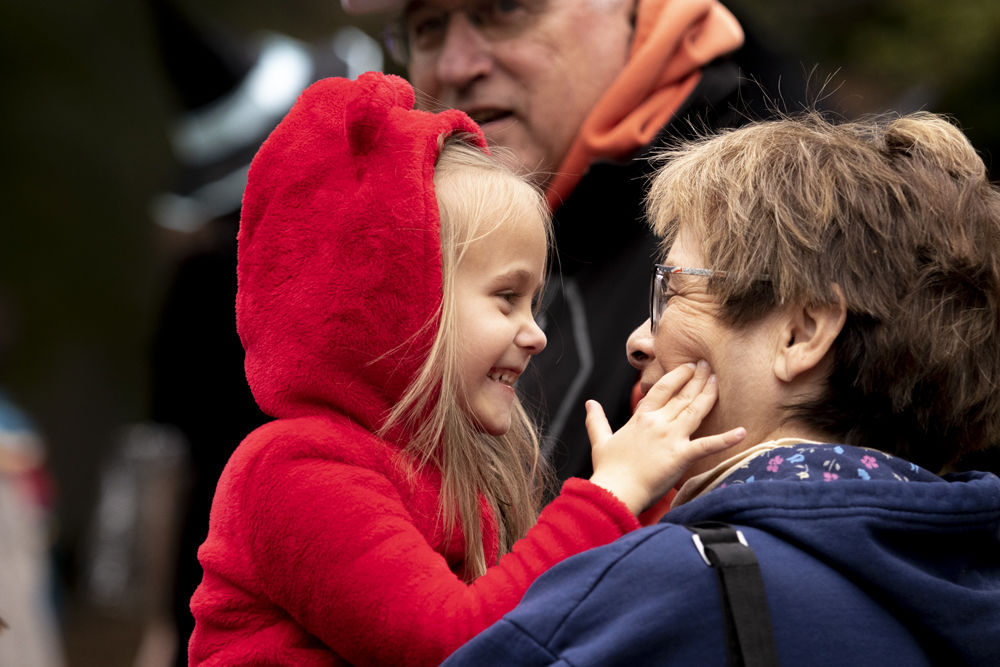 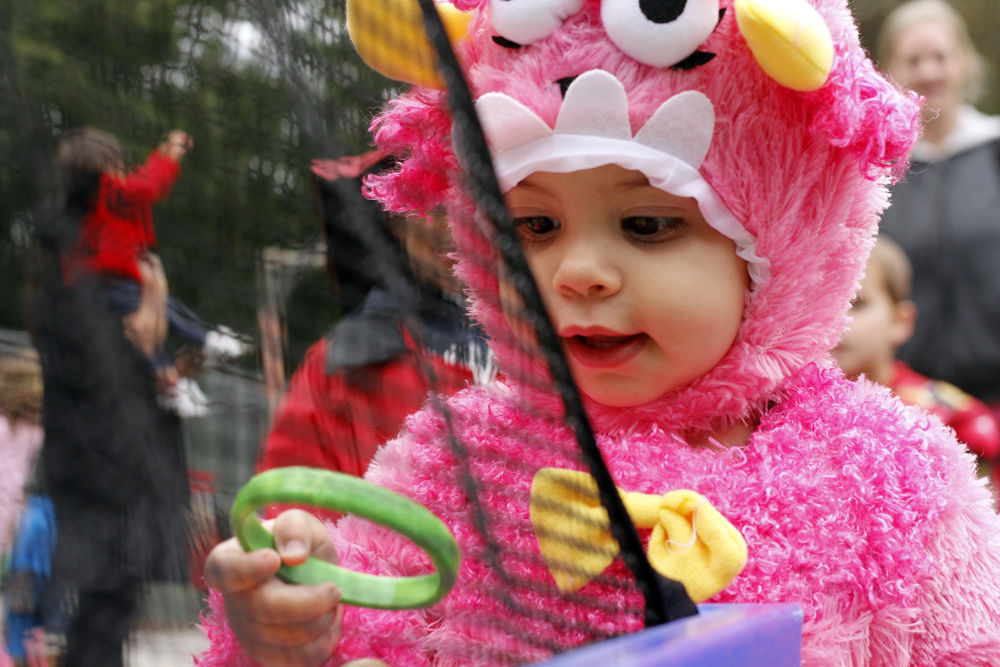 Families toted their kids around Bear Hollow Zoo on Oct. 25 from 5–8 p.m. for Boo at the Zoo, an annual halloween event. Toddlers ran around with trick-or-treat bags in hand while newborns held on tight to their parents.

Large inflatable monsters, such as a spider and a mummy, lined the path of the Bear Hollow Trail. Parents posed their children for pictures in front of the decorations and the enclosures.

Despite being surrounded by animals, the children’s sole focus was on the candy waiting for them at each stop.

Kids rushed to the booths that were set up in front of animal enclosures where kids had to answer questions about animals for the sweet prize.

Cynthia Johnson, a mom of a 2 year old, brought her little boy to Boo at the Zoo for the first time. She drove her family 45 minutes to attend the event.

“I think this is safer than going door-to-door because I am not going to take him … to the spooky stuff and I think this is better for the little ones … because they are trying to make it fun for their age,” Johnson said.

Age-appropriate games and activities were prepared for the children. Attendees were welcomed with trick-or-treating. When they walked to the basketball court, inflatables, games and a cupcake walk was laid out before them.

John McKinney has been working for the Bear Hollow Zoo for 11 years. He acted as a DJ at the event and called out the winners for events such as the cupcake walk.

“The kids love the inflatables and [the cupcake walk because] everyone loves cupcakes,” McKinney said.

The cupcake walk in particular was a huge hit among the children. A circle of chairs lay out in the front of the basketball court. Children and parents circled the chairs until they were told to stop and a number was called out, rewarding the lucky winner with a cupcake.

Two inflatables sat on one side of the basketball court and the line for them stretched all the way to the other side. The bouncy house was littered with toddlers while parents waited patiently outside, and the inflatable slide sported a long line with parents standing out front filming their children.

A costume contest was held and Johnson’s son won a ribbon for he and his mother’s matching cow onesies. Some of the most common costumes among the kids were animals and superheroes, with many kids matching their moms. The ones that stood at the most were an inflatable T-Rex and a whole family dressed in a bee theme. The mother and child were dressed as bees while the father was dressed as a beekeeper.

Attractions and contests such as these bring in families all across the Athens area and surrounding towns.

“The last few years we have had a couple thousand [people attend], so we are kind of at capacity,” McKinney said. “Between parking and the size of the facility, we cannot hold a lot more people.”

The event brings in more people every year, especially people like Johnson and her son.

“We [saw an ad] on Facebook and thought [my son] would enjoy it because he loves animals, and for the first time experience … we will most definitely [come again next year],” Johnson said.

From the staff: A Halloween hodgepodge of costumes, candy and celebrations

Happy Spooky Season to all! The Red & Black would never miss out on a way to celebrate w…

Pumpkin spice and everything nice: Pumpkin-flavored food for every meal of the day

The cooler weather ushers in a host of new music and food to fit the season. For many, the f…

Once a year, the Athens foodie restaurant staple The National hosts a brunch benefiting a wo…

Five years ago, an ambitious 8-year-old with a passion for business and sweets concocted a c…

Ike & Jane, a locally owned restaurant and bakery in Normaltown, is rooted in tradition.…

The ultimate guide to the 10th annual 2018 Wild Rumpus festivities

“Calling all freaks, beasts and creatures of the night”: The Wild Rumpus extends an invitati…

While bugs may not be everyone’s cup of tea, organizations like the University of Georgia BugDawgs try their best to show people why insects a…

Wild Rumpus Parade and Spectacle by the numbers

When University of Georgia students are away (at Frat Beach and Jacksonville for Georgia – Florida) the freaks come out to play! The annual Wi…

While Athenians and Georgia football fans look forward to Oct. 27 because of the Georgia–Florida game, drag show enthusiasts can find a differ…

A fan favorite across the decades, cookies are loved so much that the entire month of October is designated as National Cookie Month. For 31 d…

On Oct. 28, people will have the opportunity to get into the Halloween spirit by dressing up in costumes and working off all the pre-Halloween…

There are many dates and years that resonate with LGBTQ community. In 1924, the Society for Human Rights was created as the first gay rights g…

Books are a way to express ideas and influence the way people think about the world, or they can simply be used for enjoyment. Either way, boo…

Dream rock band Easter Island gives its listeners an intermingling of interlocking instrumentals and a dreamy post-rock sound. The band will o…

Little kids in Athens started their Halloween festivities early at Boo at the Zoo, an annual Halloween event held on Thursday, Oct. 24 at Memo…

Animals and Akademia: Brewery hosts night of beers and bones

Upbeat music and the smell of savory bar food filled the space between Akademia Brewing Company’s mural-filled walls on Monday, Nov. 18. While…