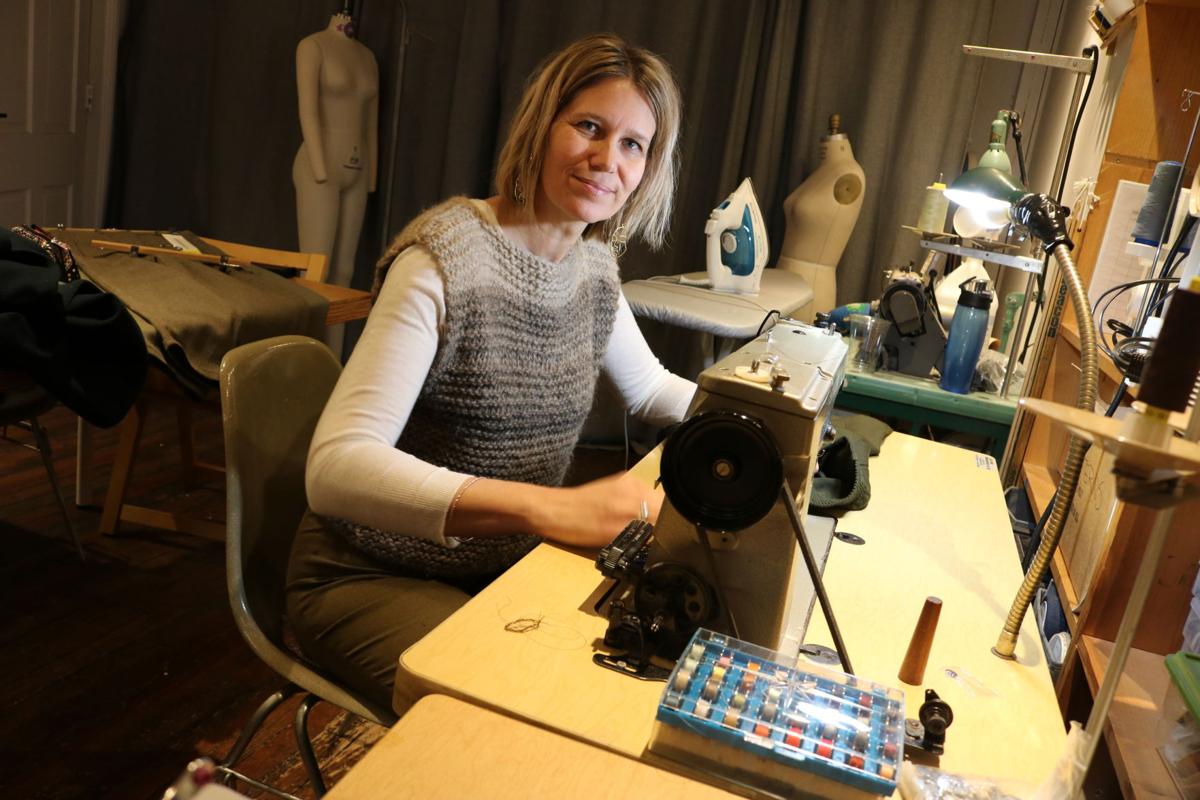 Sanni Baumgärtner, owner of Community, poses in front of a sewing machine at the sewing station in the store. 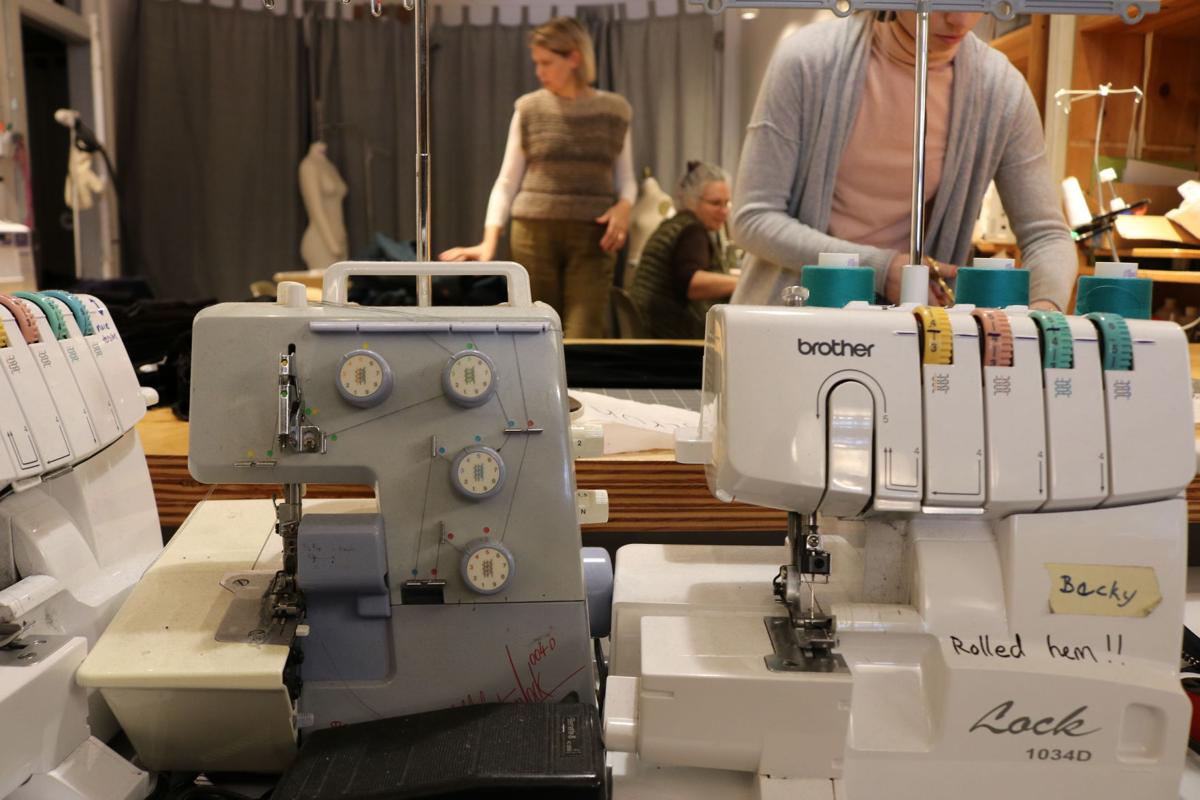 Sanni Baumgärtner checks redesigns as employees work on new clothes at their stations. 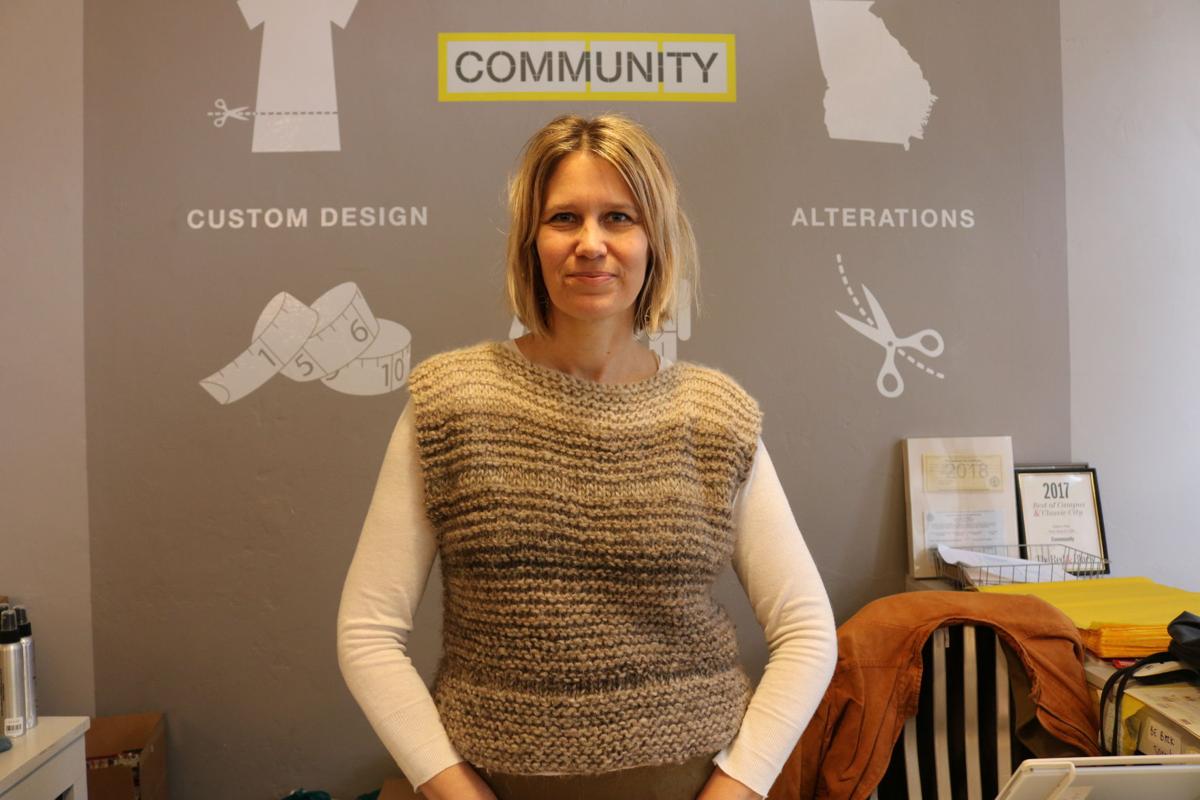 Sanni Baumgärtner, owner of Community, poses for a portrait at the front of the store.

Nested in a small spot on North Jackson Street is Community, a boutique that flaunts contemporary and sustainable fashion. In that boutique is a small team of fashion-passionate people who work every day to redesign and promote new pieces, including German-born store owner Sanni Baumgärtner, whose eyes light up at the sight of vintage clothing.

Baumgärtner always knew she loved fashion, and her interest in vintage clothes in particular started from a young age.

“When I was a teenager, I went through my mom’s closet and picked out vintage clothes and … I would also wear my grandfather’s coat or my dad’s suede jacket,” Baumgärtner said. “I loved incorporating vintage [pieces ever since] I first started experimenting with fashion.”

Shift from music to fashion

As an exchange student at the University of Georgia, she majored in psychology with the intention of becoming a therapist. She moved back to Germany to finish her degree but found her way back to Athens because she grew attached to the music scene.

She was involved in several bands in Athens, one of which played German cabaret music from the ’20s and ’30s and another which played original, contemporary music that had a more pop music feel. Her career as a musician was what led her to pursue fashion.

In order to support herself as a musician, she started to buy and sell vintage clothes. This eventually led her thinking of owning her own store.

As a musician, she always craved to be independent, and she knew that having a business wouldn’t work with wanting to be a touring musician. Eventually, she grew out of music and started to work toward her owning a store.

“For about six months, I [scouted] locations, and a place kind of came to me accidentally because the previous owner of that location was moving out and she knew I was looking to buy,” Baumgärtner said.

Around the same time, she also became interested in sewing and learned to sew by redesigning vintage clothing.

“That was how our clothing line was born,” she said. “I opened the store and then we also started doing fashion shows in town with the Athens Fashion Collective.”

The importance and meaning of fashion

For Baumgärtner, fashion was her way of self-expression and the only familiar thing to her in a somewhat foreign environment.

“My English was pretty good for an exchange student, but I was still really shy about speaking it because it was still a foreign language, so it was hard to express any personality,” Baumgärtner said. “I came to the United States with two suitcases and a guitar — music and fashion were my tools of expression.”

She describes her style to be a mix between current trends, with a consistent look that’s on the casual and androgynous side.

“But [my style] also always changes a little bit because we always discover new sides of us and new trends that speak to us,” she said.

The purpose of Community

The name of the store reflects Baumgärtner’s mission for the boutique — to provide a place for local designers and to also promote sustainability.

“I want to have the largest possible impact on the local economy while [simultaneously] leaving the smallest possible footprint on the environment with our production and business,” Baumgärtner said.

Baumgärtner is well known in the fashion community in Athens, and for good reason.

“Sanni [Baumgärtner] is definitely very involved in the community, and she’s done a lot for Athens,” said Hannah Trader, who helps manage the store and handle the different vendors at Community.

Baumgärtner’s store not only focuses on sustainability through saving energy and recycling — she also works with used materials in every clothing line.

“All the production happens here at Community, so we have a lot of transparency as to how our clothing is made,” Baumgärtner said. “We purposely have the sewing area be a part of the retail space so people can really see how we make our clothes.”

The store’s concept of redesigning clothes came from a combination of Baumgärtner’s love for vintage and contemporary fashion.

“When you walk into the doors of Community — all the clothes — that’s just her style,” Trader said.

The whole process starts at the thrift stores. When hunting for clothes, Baumgärtner usually follows a certain color scheme or tries to look for certain styles or materials for that season.

Although some of the pieces are one-of-a-kind, she also tries to find similar pieces that can be redesigned in the same way so they create a single, uniform product.

“We’ve been taking a lot of men’s sweaters that have ’90’s patterns and cropping them in the same way so the similar style can be found in different sizes and multiple quantities,” Baumgärtner said. “So basically, they become a product even though each one is still uniquely one-of-a-kind.”

Most of the sewing that comes after the design process is done by part-time redesigners and interns.

Baumgärtner said she hopes to continue to serve the local community and also bring fresh and different collections to the store.

“One of the collections we did in the past was inspired by the colors of Georgia crops such as peaches, muscadine, cotton and pecans,” she said. “We try to do a special collection once a year that has a story behind it.”

The store owner also hopes to expand the store’s clothing line and spread the message of community service and sustainability.

“Right now we’re starting to move more into wholesale,” Baumgärtner said. “There’s two stores in Atlanta that carry our line and we’re trying to reach out to different cities.”

If you find yourself at the Lamar Dodd School of Art at the University of Georgia, you might…

Studio 1093 to change management after 39 years in Athens

Hidden on a quiet corner of the Boulevard neighborhood in Athens, Jim Hawkins has owned and …

For many, makeup is a source of empowerment, a medium of self-discovery and culmination of i…

Like most Bulldog fans, Adam Thornton has loved University of Georgia football from an early…

From UGA to Alaska: Lieutenant Colonel Moniz’s journey through the Army and new assignment

Lieutenant Colonel Chad Moniz, the professor of military science at the University of Georgi…

Best things of 2018 to Eat, Drink and Do on campus and in the Classic City

We asked readers which Athens staples made their short list, then we threw in a few favorites of our own. From best drunk food to best hidden gem, here are the award-winning best things to eat, drink and do all around Athens.

From the staff: Thoughts on Santa? Is he a phony or as real as they get?

As holiday season rolls around, there is so much to think about. 'Tis the season for embarki…

Entering a library usually offers the smell of old books, but on Nov. 5, the aroma of basil …

Cuddle up: 5 cozy date ideas for the holiday season

With colder weather and cuffing season falling upon the University of Georgia and Athens, ma…

As the semester draws to a close, one day is granted to University of Georgia students to do with as they see fit. For the members of Rescue P…

‘Christmas Around the World’: Downtown Parade of Lights brings Christmas cheer to streets of Athens

The holidays are in full swing in Athens. The Downtown Parade of Lights on Dec. 6 marked the beginning, filling the streets with Christmas che…

Review: ‘Boy Erased’ means well, but leaves something to be desired

LGBTQ cinema has been on the rise recently with films like “Call Me By Your Name” and “The Miseducation of Cameron Post.” “Boy Erased” joins t…

Celebrating Hanukkah in a single-synagogue town

On Sunday, Dec. 2, the first candle of Hanukkah was lit in the homes and worship spaces of people all over Athens. Hanukkah, a holiday in the …

Take it easy: 3 video games from 2018 that are accessible without being dumbed down

With the increasing popularity of video games, those unacquainted with the activity may be interested in taking it up as a hobby. Not only is …

Fearless imagery and self-exploration: The Holy Knives to play at Caledonia Lounge

Like other technologies, gaming systems make for tricky holiday gifts — in most cases, it’s not enough to buy the hardware itself, as there ar…

“The one thing nobody can beat me at is being me. That’s all I have — my individuality,” said Haley Dunigan, a senior studying fashion merchan…

Rubber Soul Yoga has continuously served the community of Athens with physical and mental sustenance for over 12 years.

The holiday binge: 5 Must-see holiday shows and movies on Netflix to cozy up to

Every semester, the University of Georgia Career Center hosts a career fair at The Classic Center for current students and alumni seeking jobs…

A search for fulfillment combined with a fascination with repurposed materials is what led Kalev Jaason to art five years ago.

When people think of fashion, they generally think of clothing — dresses, tops, pants and suits. One student at the University of Georgia is p…

Punk subculture, which expands past the clothes to encompass various ideologies and forms of expression in the arts, has origins within a comm…

Years of classes and a degree in fashion wasn’t what led Tabitha Fielteau to her successful brand. Rather, it was her passion for self-teachin…

Lori Paluck was inspired by women entrepreneurs as a college student, and now, she’s living her dream through her own business — Dynamite Clot…

Tucked in the back corner of the downtown Athens boutique, piles of the University of Georgia’s football program’s iconic red and black jersey…