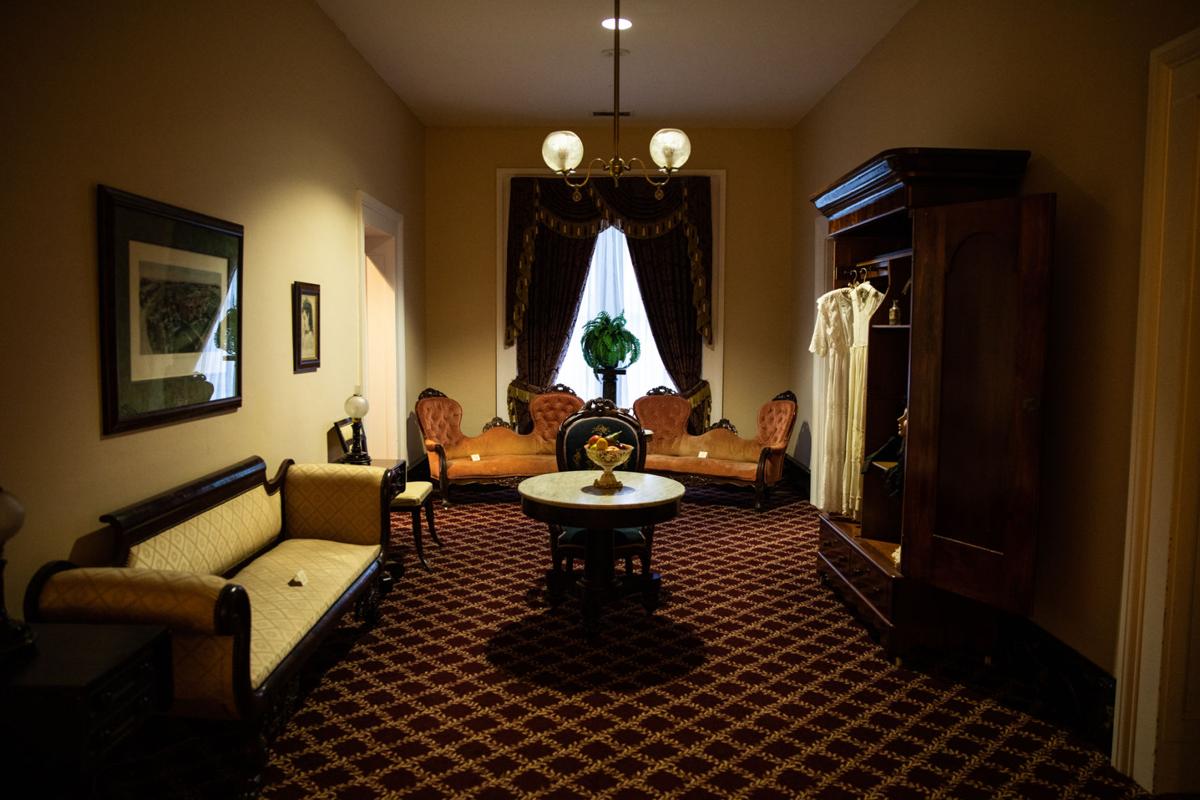 Couches sit across an open wardrobe filled with dresses and suits. Built circa 1850, the Ware-Lyndon House houses countless 19th century artifacts, and, according to some, ghostly remnants of its former inhabitants. The Ware-Lyndon House sits in downtown Athens, Georgia, and is connected to the Lyndon House Arts Center. Oct. 10, 2019. (Photo/Ryan Cameron rcameron@randb.com) 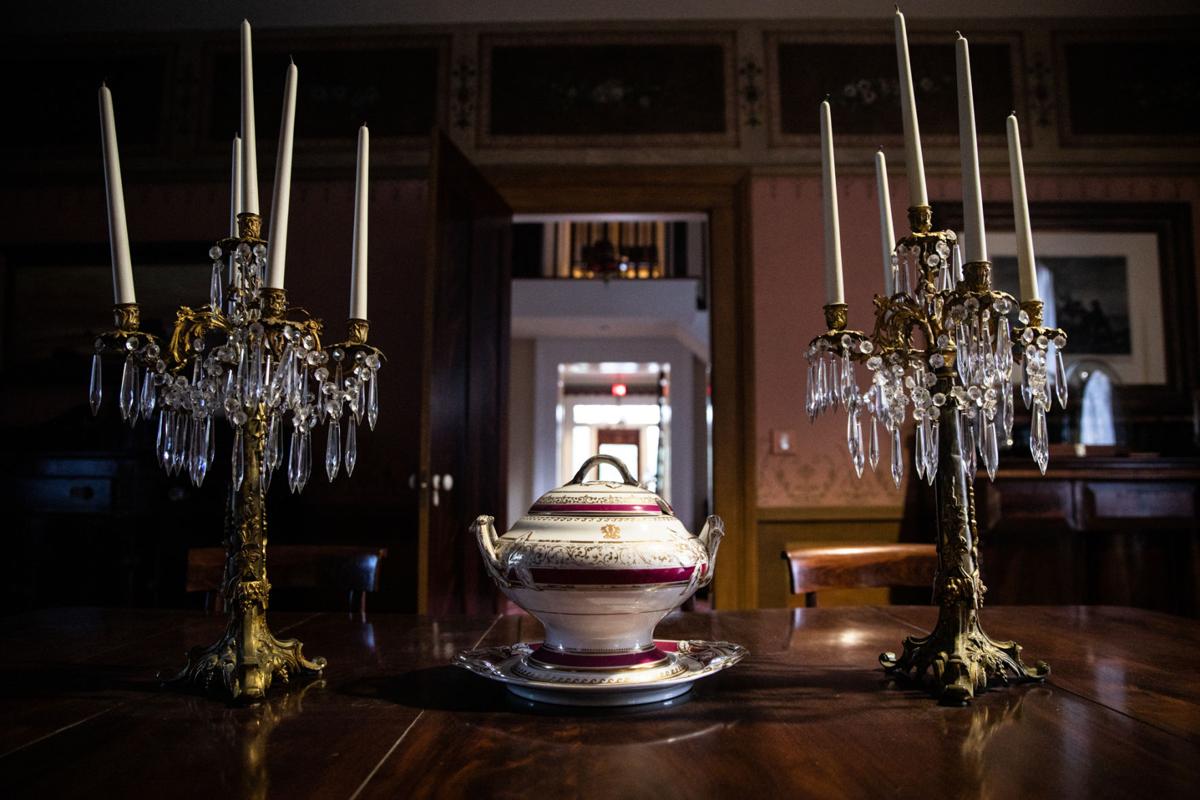 Built circa 1850, the Ware-Lyndon House houses countless 19th century artifacts, and, according to some, ghostly remnants of its former inhabitants. The Ware-Lyndon House sits in downtown Athens, Georgia, and is connected to the Lyndon House Arts Center. Oct. 10, 2019. (Photo/Ryan Cameron rcameron@randb.com) 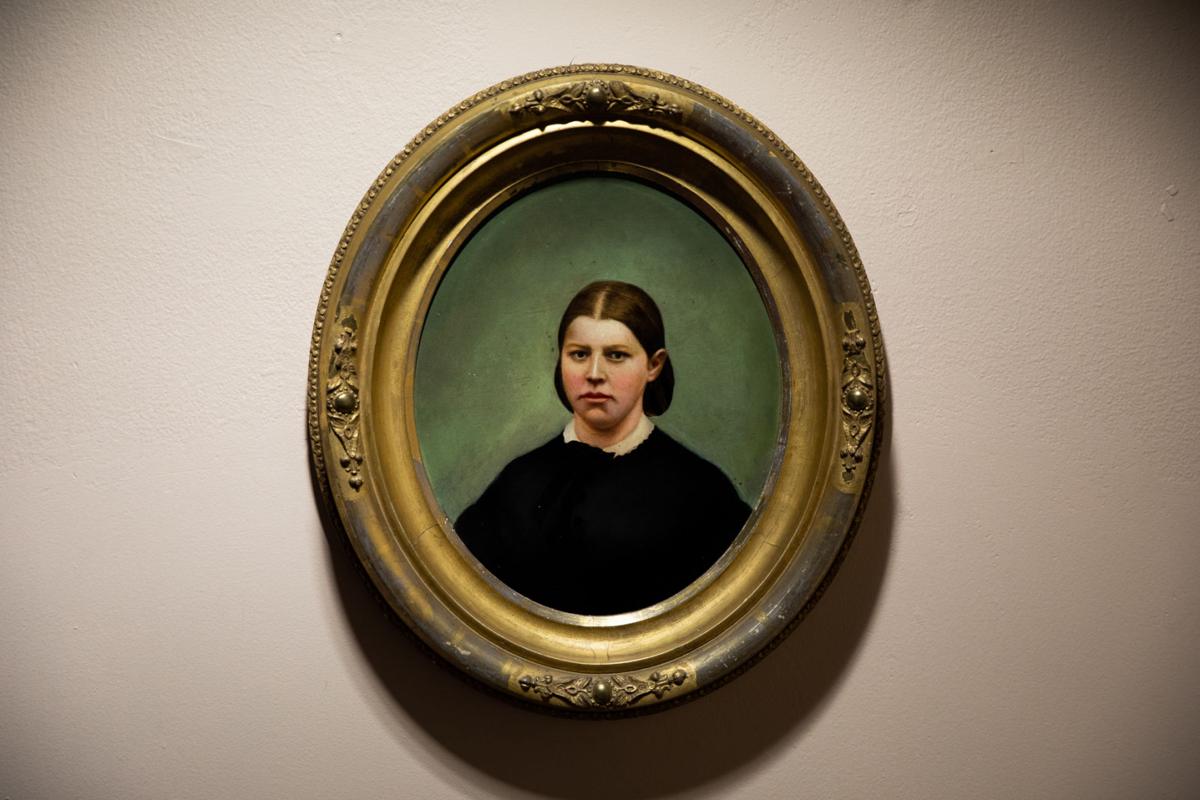 A portrait of a girl hands on a wall. Built circa 1850, the Ware-Lyndon House houses countless 19th century artifacts, and, according to some, ghostly remnants of its former inhabitants. The Ware-Lyndon House sits in downtown Athens, Georgia, and is connected to the Lyndon House Arts Center. Oct. 10, 2019. (Photo/Ryan Cameron rcameron@randb.com)

When Didi Dunphy heard an unexplained voice on an audio file from inside the Lyndon House Arts Center, she was startled. She wasn’t surprised, though— hearing a distinct, unidentifiable voice from a paranormal investigation in a house over 100 years old wasn’t completely unexplainable.

“Two or three years ago,” according to Dunphy, a paranormal investigator sat in a newly restored bedroom of the Italianette-styled Ware-Lyndon House. The room was originally built in the mid-19th-century and read aloud an authenticated letter from Mrs. Margaret Ann Elizabeth Lyndon, the wife of Edward S. Lyndon, who was the second owner of the home and the house’s namesake. After the reading, the investigator thanked her for allowing him to read the letter and asked if there was anything she would like to add.

“He paused, and there was a distinct ‘no!’ on the recording,” Dunphy, the Lyndon House Arts Center’s program and facility supervisor, said. “The entire staff heard it.”

The investigation also reported that the second floor was “very busy” with spiritual activity.

“The investigators found the [second floor] hallway was full of children, and Mrs. Lyndon was annoyed and angry at all of the rambunctiousness of all the children in the hallway,” Dunphy said.

Though the investigation brought official reports of the spiritual activity within the home, unofficial accounts heard “through the grapevine” add to the haunted credibility of the home, according to Dunphy.

Jeff Clarke, local Athens historian and tour guide of the Athens Welcome Center’s History & Hauntings Tour, has heard descriptions of other similar sightings through the grapevine.

“There is an entity, a visitant, a haunt, a ghost, that lives in the building,” Clarke said.

Employees and guests of the Ware-Lyndon House have seen a gentleman pacing on the landing, according to Clarke.

Clarke has two guesses for the identity behind the man on the grand staircase landing.

The second owner of the Ware-Lyndon House, Edward S. Lyndon, is his first. Lyndon was a prominent physician in Athens and served in the Civil War by performing amputations, according to “Ghosts of Athens: History and Haunting of Athens, Georgia” by Tracy Adkins.

Lyndon suffered a breakdown after the Civil War— with symptoms similar to those from post-traumatic stress disorder, according to Clarke— and became a druggist. He suffered from insomnia due after the war, too.

“People who work there and many guests have seen a gentlemen pacing on the landing,” Clarke said. “Some say he paces nervously and other times he’s just walking back and forth. People assume that this is the doctor having one of his insomnia-tic episodes.”

Clarke’s other theory is that the man on the staircase is Lonnie Spaulding, a coastal Georgian who stayed at the Ware-Lyndon House in 1895 according to Clarke.

Lonnie Spaulding’s wife, Nellie, was coming up from coastal Georgia by train. Nellie was far along in her pregnancy, and she had difficulty on the train, experiencing discomfort due to her lateness in term.

Soon after their arrival, Nellie went into labor. Lonnie, who was in town for business, heard of his wife and rushed back to the house to witness the delivery of their child. In the midst of his rush, however, he was hit in the middle of the street by a horse-drawn cart. While this normally wouldn’t be fatal, causing no more than “maybe a severely bruised ego” according to Clarke, the horse’s hoof came down squarely on Lonnie’s head.

That’s who I think the ghost is,” Clarke said. “I think it’s Mr. Spalding waiting for a child that he would never know.”

Ghosts of the Classic City: The Morton Theatre’s haunted phenomena

There’s over 100 years of life inside of the Morton Theatre. It is America’s only African-Am…

‘A vibrant afterlife’: History and Hauntings Tours to showcase history and ghost stories in Athens

When the band Jester played its last show during AthFest this year, the members said there was only one event they would get back together for…

4 spooky events to get you in the Halloween spirit

Dying for fun? Scary stories, creative crafts and games for the whole family are among this year’s festivities for the Halloween season. The R…

Pumpkin spice up your Halloween decorations with these 6 crafts

Athens is finally showing some signs of cooling down, and with the sun setting a bit later by the day, Halloween decorations are beginning to …

Today, Memorial Park is settled in the Five Points neighborhood, home to the Bear Hollow Zoo and a part of the Athens-Clarke County Leisure Se…

Ghosts of the Classic City: The Haunt of Demosthenian Hall

Demosthenian Hall, built in 1824, is the fourth oldest building at the University of Georgia. It houses the longest continuously running stude…