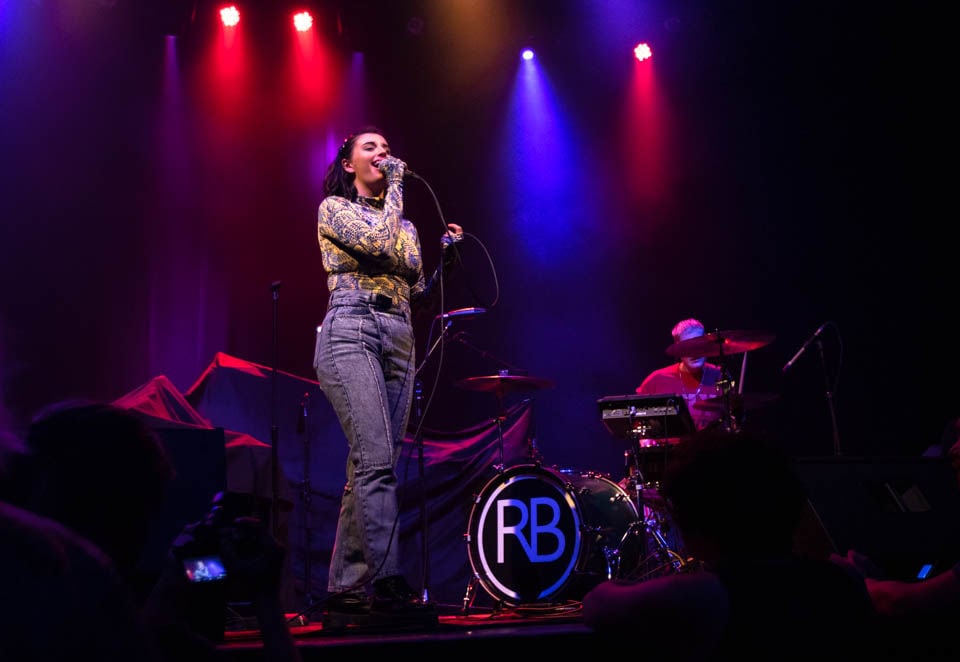 Rebecca Black performs as an opener for Man Man at the Georgia Theatre on Friday, July 19, 2019, in Athens, Georgia. Black, who rose to fame in 2011 with her viral YouTube music video to her original song “Friday,” showed her maturity both as an artist as well as a person with an undeniably likeable stage presence, soulful vocals and emotional lyrics. (Photo/Gabriella Audi, www.gabbyaudi10.wixsite.com/mysite-1)

Rebecca Black performs as an opener for Man Man at the Georgia Theatre on Friday, July 19, 2019, in Athens, Georgia. Black, who rose to fame in 2011 with her viral YouTube music video to her original song “Friday,” showed her maturity both as an artist as well as a person with an undeniably likeable stage presence, soulful vocals and emotional lyrics. (Photo/Gabriella Audi, www.gabbyaudi10.wixsite.com/mysite-1) 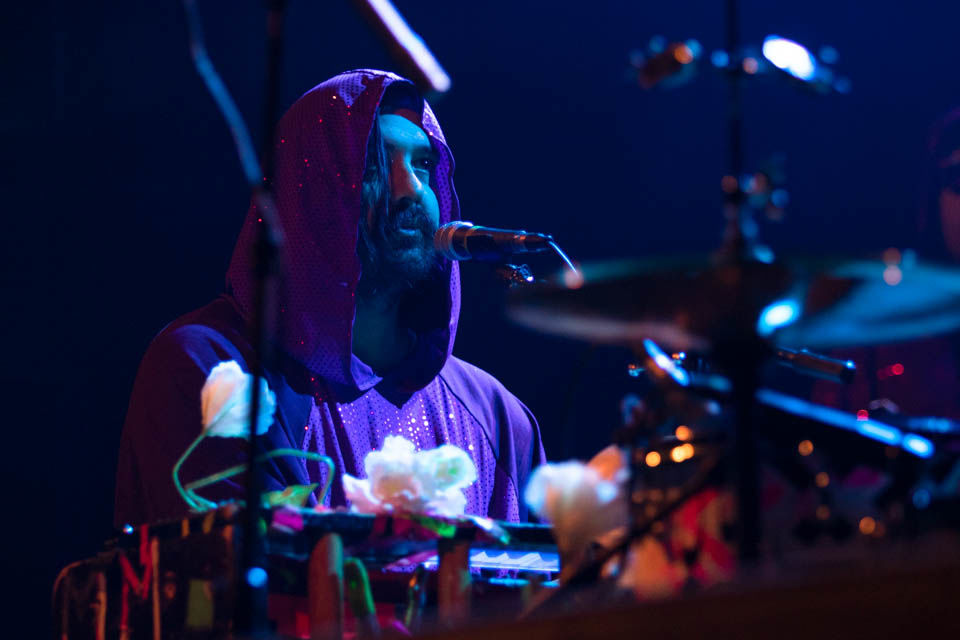 Man Man performed with enthusiasm and grandeur at the Georgia Theatre on Friday, July 19, 2019, in Athens, Georgia. The band, opened by Rebecca Black, wore matching, sparkly purple ponchos as they performed a set that defied the boundaries of genre and kept both the audience and the band members entertained throughout. (Photo/Gabriella Audi, www.gabbyaudi10.wixsite.com/mysite-1) 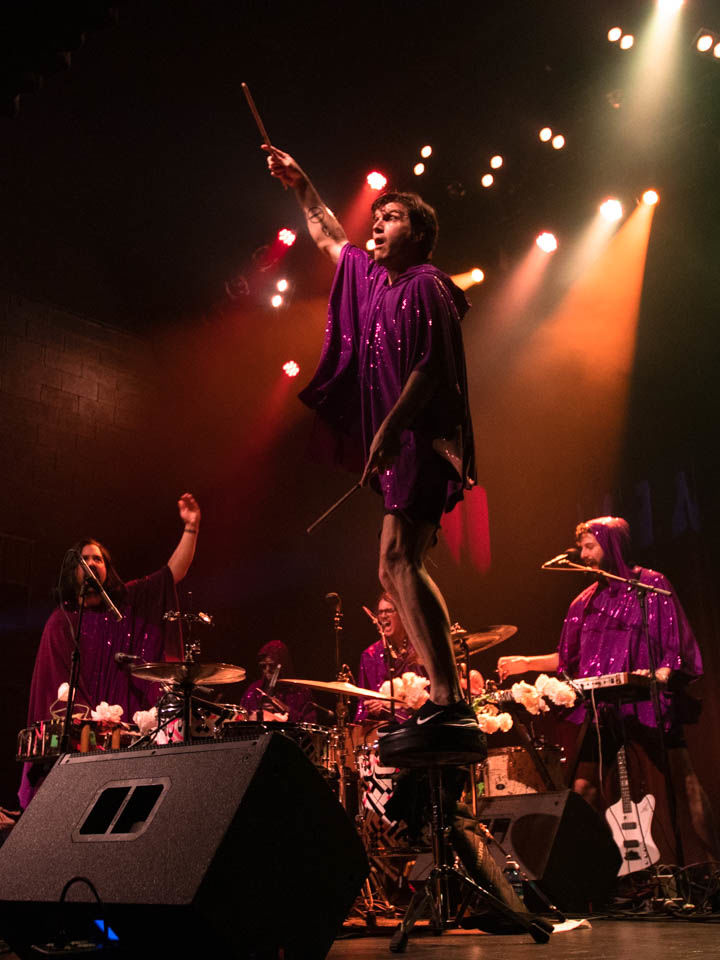 Man Man performed with enthusiasm and grandeur at the Georgia Theatre on Friday, July 19, 2019, in Athens, Georgia. The band, opened by Rebecca Black, wore matching, sparkly purple ponchos as they performed a set that defied the boundaries of genre and kept both the audience and the band members entertained throughout. (Photo/Gabriella Audi, www.gabbyaudi10.wixsite.com/mysite-1)

Rebecca Black, 2011 viral sensation, showed off her impressive vocals on Friday at the Georgia Theatre as the opener for the band Man Man.

There’s no need to dig out your old Silly Bandz and Aeropostale T-shirts to enjoy Black’s performance. She and her music have matured with the times.

Gone are the nasally, overproduced songs of the past. Black now sings emotional pop ballads and has an undeniably likeable stage presence.

The crowd was just starting to fill in and few seemed to be familiar with Black’s music, but audience members still danced along and she received an enthusiastic round of applause.

Between songs, Black interacted with the crowd, telling them she had just gotten a tattoo before the show at 3 Ravens Tattoo & Piercing on Clayton Street.

Black’s second song was “The Great Divide,” during which the singer danced energetically with pop starlet-style hair flips and body rolls.

The next song was 2018’s “Satellite,” a more emotionally vulnerable ballad. Black showed off her development as an artist with deep, smooth vocals.

“Anyone here heard of the band No Doubt? If not, I wrote this next song,” Black joked. She then started a cover of 1995’s “Don’t Speak” by the Gwen Stefani-fronted band. Black did the original song justice with an enjoyable and accurate re-creation.

Black announced her next song, “Do You,” by explaining she released it last month on her 22nd birthday. She also used the song to show the audience that her talent goes beyond vocals, taking her place behind a keyboard.

Black complimented an audience member on their make-up before announcing her last song, “Anyway.” She asked the audience to dance along, ending her performance on an up-beat note.

Black has certainly grown a lot since her widely-criticized 2011 debut. With strong vocasl and a friendly and captivating stage presence, the artist is one to watch out for.

At 10:00 p.m., Man Man took the stage in sparkly purple hooded ponchos, their set littered with strange props such as a plastic skull and a fake owl.

The band’s sound is hard to describe, with a diversity of unusual instruments and unique sounds.

Man Man’s infectious enthusiasm and absurd talent energized the crowd as the band members interacted through interesting chants, including one that mimicked the baa-ing sound of sheep.

The lead singer, at one point, blessed the crowd like a priest with water from his bottle.

Friday night’s show was entertaining to say the least, with two amazingly talented acts that kept the audience on their toes throughout.

5 music events to look forward to this July

With August quickly approaching and classes coming with, it may feel like summer is slipping right through your fingertips. There is still a ways to go, however, and with these next few weeks comes five music acts that are worth checking out before summer ends.

Solo artists, bands, art stands and food vendors were highlighted during the 23rd annual AthFest Music and Arts Festival from June 21-23. An estimated 30,000 people attended the summer festival, and a combined 171 solo acts and bands took the stage.

The band *repeat repeat stopped in Athens to rock the Georgia Theatre rooftop as a part of its Glazed and Confused Tour on Friday, June 14. The group brought rock-like energy and punk-like rebellion as it performed songs from its most recent album, “Glazed.”

Formed last year, AFTM consists of vocalist and guitarist Forrest Whitlark, guitarists Will MacLane and Kelly Bouchillon, bassist John MacClane, drummer Cam Corsino and keyboardist John Cherry. After performing at last year’s Club Crawl, the band is headlining AthFest on the Southern Brewing Co. Mainstage on Saturday night. Before their performance, The Red & Black sat down with the group to discuss their new song, playing shows in other cities and what they’re most looking forward to at AthFest.

Dawgs take on AthFest: UGA students to perform in the AthFest Club Crawl

Jester will be taking the Mainstage at the Georgia Theatre during the Club Crawl for its first performance at AthFest Music and Arts Festival, which also happens to be its last time playing together as a group.

40 years of music production: A look back on Athens' B-52s

Coming up on the 40th anniversary of its first LP, the B-52s are one of the biggest bands to have come out of the Athens music scene. The group became a household name internationally over the past four decades from hits like “Rock Lobster” to “Love Shack.” We compiled a few highlights of the group and its visits back to its home, right here in this college town.

Love is in the air for some Bulldogs as a new year at the University of Georgia begins once again. For those trying to couple up for the impending fall months and the Instagram-worthy football season photos, try taking your date to one of these iconic Athens hot spots.