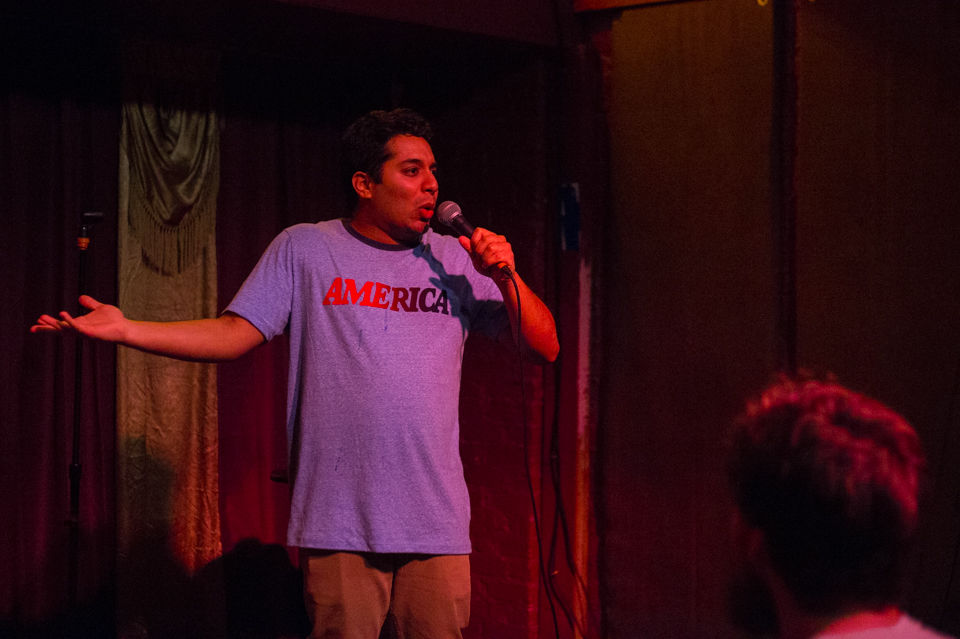 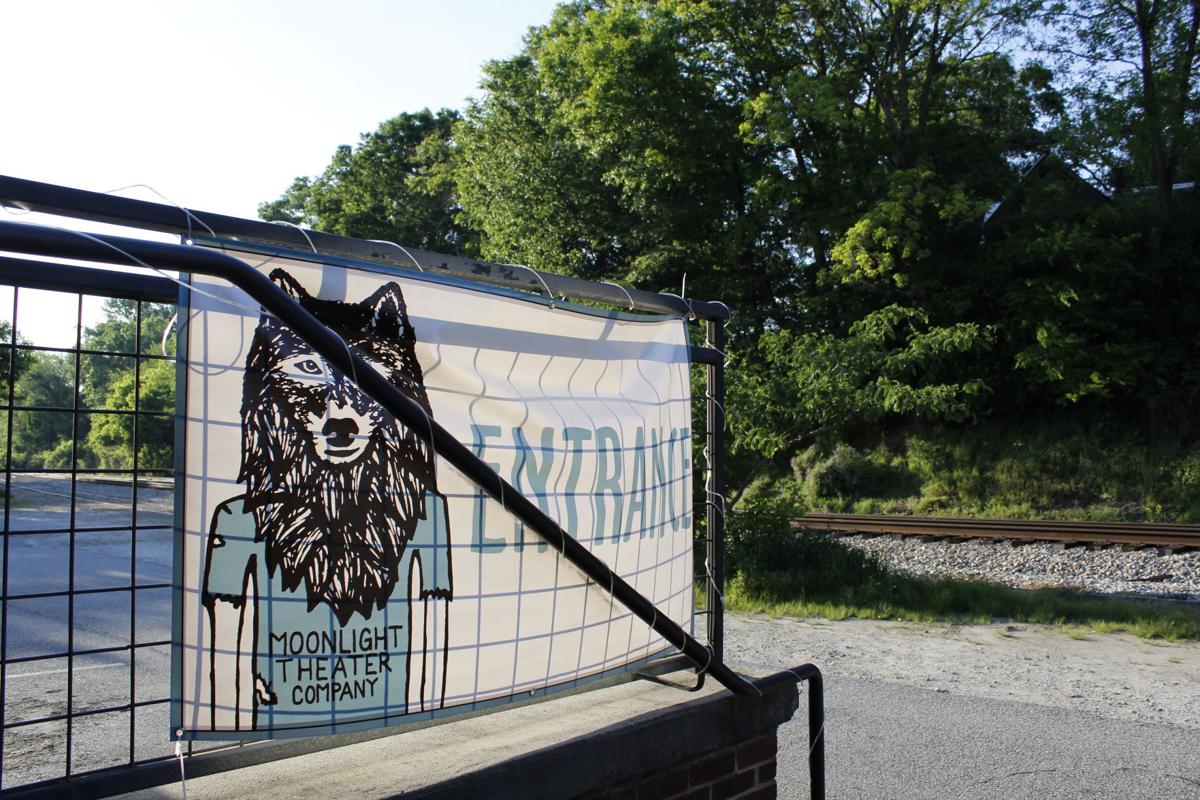 Moonlight Theater Company, Athens’ only comedy club, shut its doors on March 17 as a result of the COVID-19 pandemic. (Photo/Anila Yoganathan)

Scheduled on St. Patrick’s Day, the Dublin Down Comedy Show was supposed to be comedian Alia Ghosheh’s first show of the year. But as concerns over the coronavirus outbreak in Georgia began to ramp up, comedy shows around Athens began canceling.

“It snuck up on me,” Shaunak Godkhindi, an Atlanta-based comedian and host of Athens’ OpenTOAD Comedy Open Mic show at Flicker Theatre and Bar, said “I did shows Friday, Saturday and then I had shows on Sunday and I found out Saturday night, they were getting canceled.”

And then Godkhindi’s shows for the rest of the month were canceled.

As part of social distancing efforts set by the Athens-Clarke County Mayor and Commission and national government, venues such as Flicker have closed, raising concerns over whether these small businesses will be able to sustain themselves until the situation improves. For comedians and show hosts specifically, there is a question of whether their show venues will even exist afterwards.

“Will those venues still be open at the end of this, and if they're not, you know, we're all gonna have to be looking for a different place to host our shows,” said Joy Anna, host of Heckle Hell Comedy show at That Bar, referring to some of the smaller venues in Athens.

But the question of show venues is only the tip of the iceberg for Athens comedians. There are also concerns of what the comedians will do when they are limited in performing live shows and what comedy in Athens will look like once the ordinances and panic have lifted.

Joy Anna resisted canceling her seventh Heckle Hell show as long as she could. Anna said her sixth show in February had yielded a large turn out, and when other shows began canceling, she wanted to find a way to save hers.

“So our original plan was we were still going to continue on and have it at that location,” Anna said. “And we were going to livestream via Facebook and Instagram because that would be a way for others to still view.”

However, once the ACC Mayor and Commission passed ordinances to limit the number of individuals in a location to 10 people, Anna realized that even doing a livestream would not be possible.

While Heckle Hell canceled later on, Michaela Wilkins, host of Empty Cap Open Mic at Walker’s Coffee and Pub, canceled her Sunday show as students would be making their way back from different locations during the end of spring break.

“I got a couple messages that were like if, like, if there's any time that we need laughter we need it now,” Wilkins said. “But I also feel like it would be unsafe for both the performers and the audience, for us to continue to do it in the middle of a pandemic.”

While some comedians in Athens do not solely perform comedy, a large part of their lifestyle was completely changed due to show cancellations.

“It was frustrating,” Godkhindi said. “March and April were supposed to be very good months for me in terms of the caliber of shows I was [performing] and also the paychecks tied to those shows,” Godkhindi said.

Athens’ only comedy-specific club Moonlight Theater Company had to shut its doors as well.

“I mean, we [Brantley and his comedy partner, Nicholas Hemering] had a tour scheduled for five cities and two international countries. And it's all canceled,” said Moonlight owner Chase Brantley.

The momentum the Athens comics and comedy businesses have begun to build over the years may completely stop, Wilkins said. Moonlight opened a little over a year ago, and different types of shows such as open mics have come and gone at various locations. It is unclear what will remain of the scene when things start back up, as some comedians will graduate and some venues may be closed.

“Really, our ultimate goal was to start a comedy club, which we're really glad we didn't sign a lease on,” said Owen Hunt, comedian and member of the Athens’ Flying Squid comedy collective.

Money aside, these comics also face the lack of a live audience. Anna expressed concern for how some of these comedians use comedy as an outlet and a way to cope.

“But we're gonna have so much material once this is over,” Ghosheh said.

Though the traditional live shows with over 10 people in bars and coffee shops may not be possible, there are still ways some comedians plan to perform and practice their craft during this time.

Wilkins mentioned restarting a comedy magazine a few of her friends and her had once done. Godkhindi talked about posting commentary on Twitter and screenwriting with his girlfriend and fellow comedian, Piper Ruhmkorff.

Flying Squid’s operation is only an example of the different avenues these comedians can pursue. Some in Athens already have their own podcasts or radio shows.

“As far as comedy goes, we're just going to be discovering new ways of doing comedy or if not expanding ways that already exist,” Brantley said. “So, in the world of comedy, we're gonna be fine.”

The Athens Downtown Development Authority has announced the availability of small business grants to offset expenses during the coronavirus pandemic.

Staff picks: What we're watching, listening to while social distancing

The Red & Black's culture desk compiled a list of what the staff is currently watching, listening to and reading while social distancing.

The 41st annual Athens Orthopedic Clinic Twilight Criterium has been postponed to September 18-19.

Akademia Brewing Company has launched a new outreach program to assist the community and provide employment opportunities for its staff during the coronavirus pandemic.

How 5 Athens coffee shops are responding to COVID-19

The Red & Black has compiled a list of five Athens area coffee shops adopting new measures in response to the coronavirus pandemic.

In the wake of the coronavirus pandemic, Watkinsville’s Extra Special People nonprofit has developed new initiatives to connect with and suppo…

OPINION: Being young alone won't save you from COVID-19

Younger people need to take the coronavirus seriously. Though not at risk of dying, they can hurt themselves and others by putting themselves at risk.

With the physical campus at UGA effectively closed for the remainder of the semester to prevent the spread of COVID-19, and with isolating pre…

What it means to be a woman comic in Athens

From hostile atmospheres to choosing whether or not to censor themselves, women comics of Athens talk about what it means to be the only woman in the room with an audience demanding laughter.