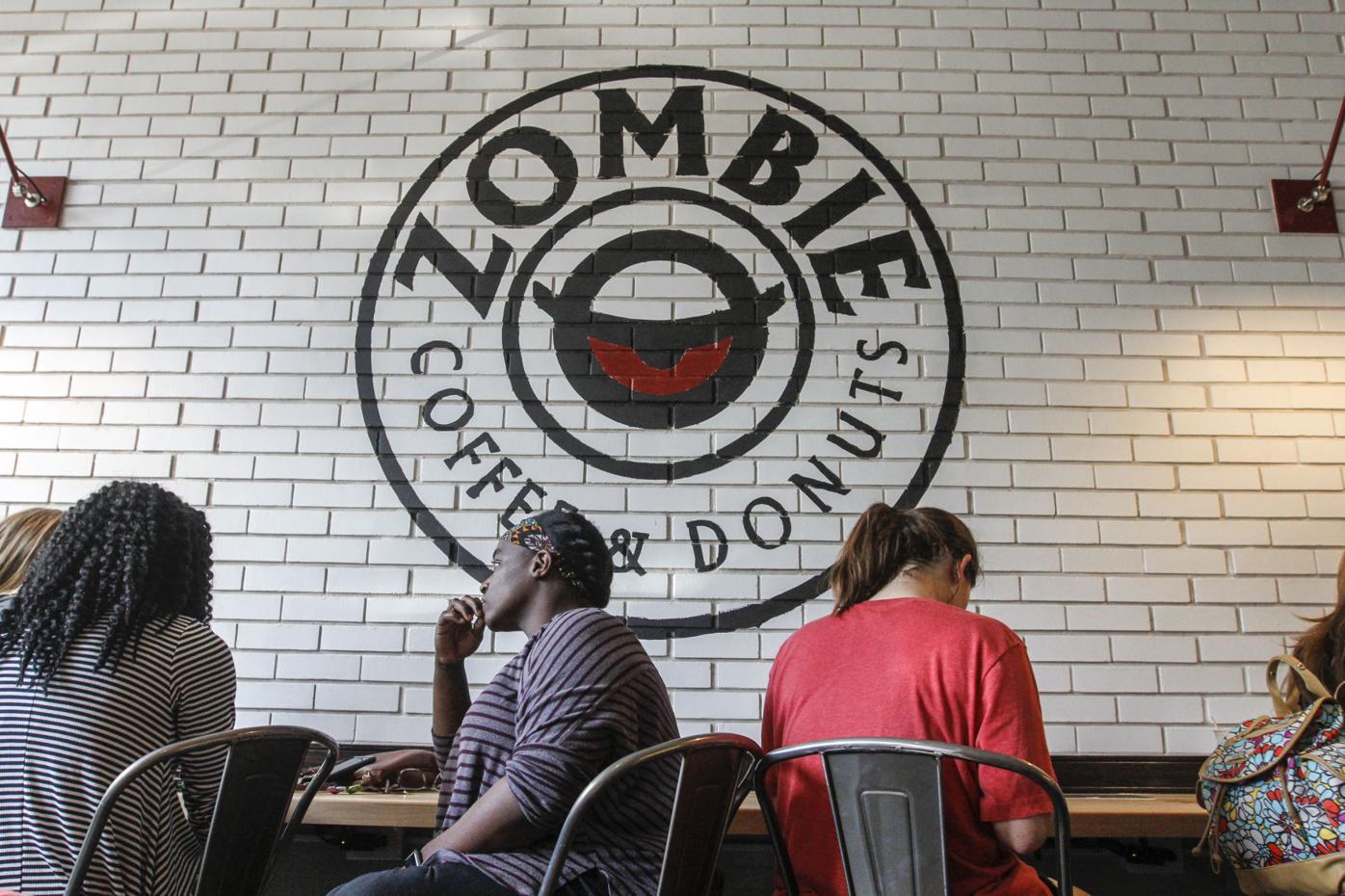 Zombie Donuts, which opened May 23, donates 5 perfect of its overall sales each month to a locally-selected charity as part of the store's mission. (Photo/Casey Sykes, www.caseysykes.com) 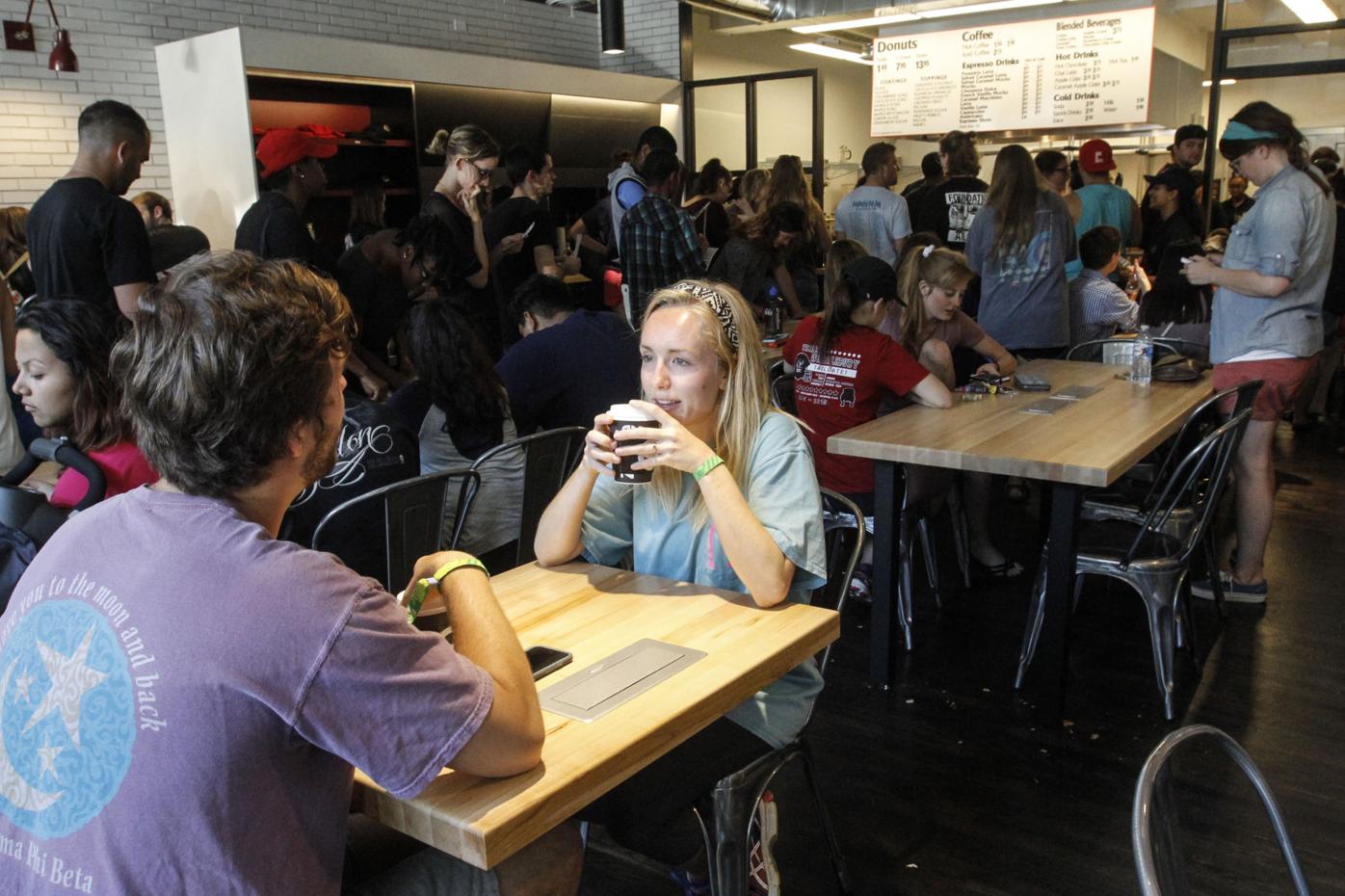 Rebekah Livingston, 21, a health promotions and services major from Peachtree City, Georgia, talks over coffee with Hunter Smith, 20, a computer systems engineering major from Alpharetta, Georgia, while others wait in line inside of Zombie Coffee & Donuts on the business's opening day in Athens, Georgia, on Monday, May 23, 2016. (Photo/Casey Sykes, www.caseysykes.com) 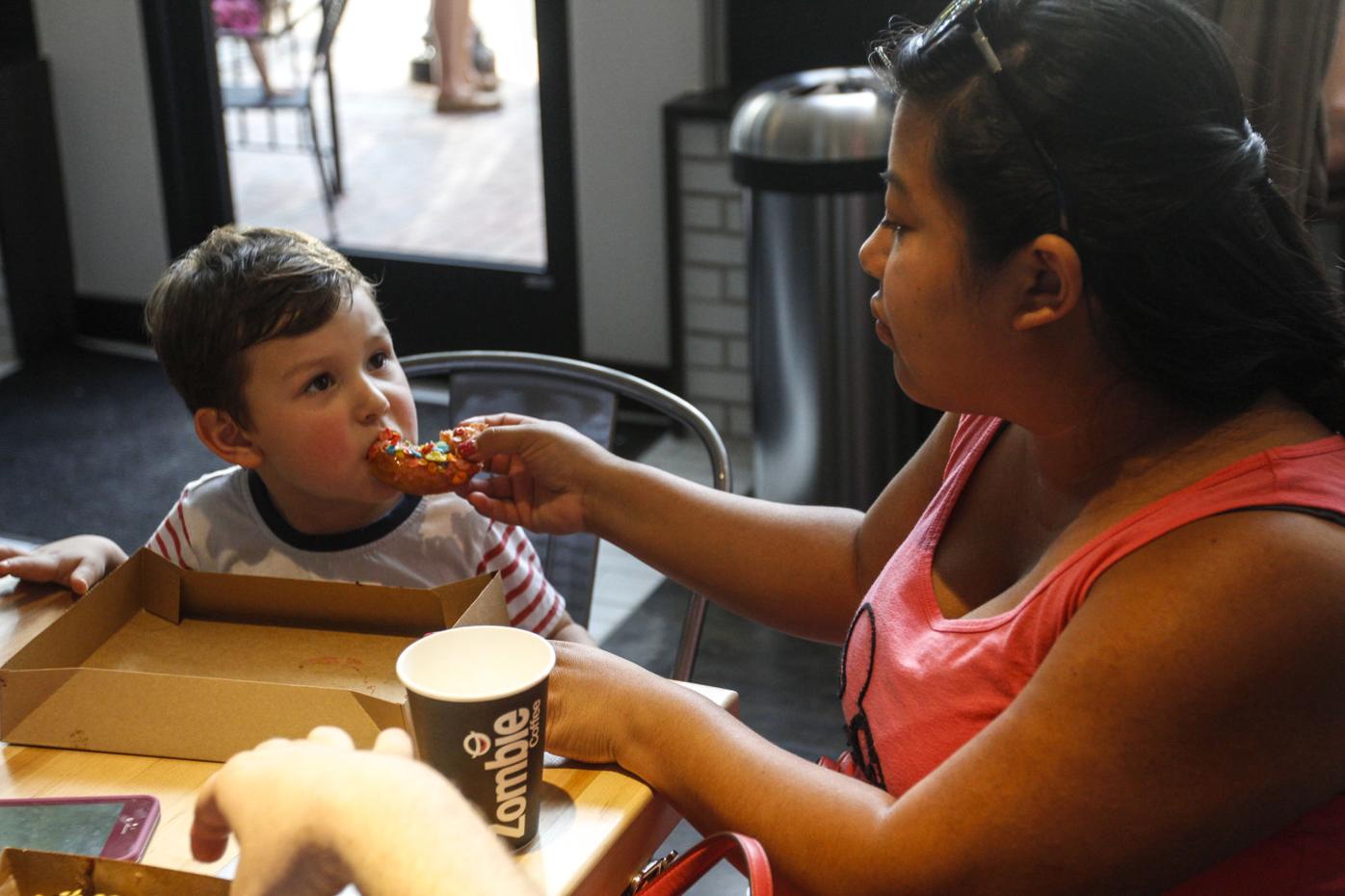 Owen White, 3, of Albany, Georgia, takes a bite of a donut given to him by his mother, Lilian White, 23, inside of Zombie Coffee & Donuts on the business's opening day Athens, Georgia, on Monday, May 23, 2016. (Photo/Casey Sykes, www.caseysykes.com) 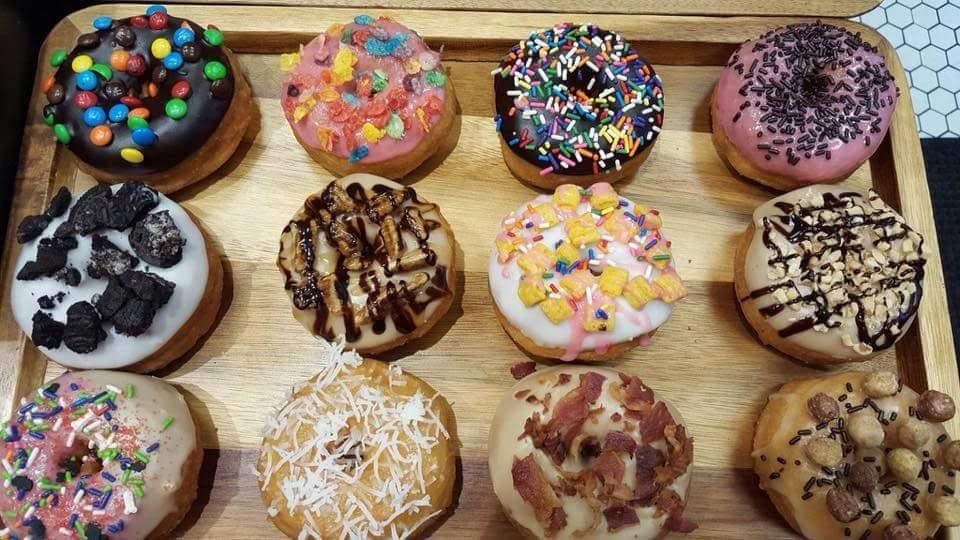 Zombie Coffee and Donuts will open its doors in downtown Athens in early April 2016.

For Tony Raffa, who opened the first franchise of Zombie Coffee & Donuts in Athens, the sweetest part of managing the shop isn’t the maple icing donuts but rather the ability to positively change the local community.

As the 22-year-old business management student was wrapping up his last semester at the University of Georgia, he met Chuck Randleman, a frozen yogurt magnate based in Washington D.C. After kicking ideas around for a coffee shop specializing in self-serve caffeine, the franchise was realized.

The business evolved from pop-up shops located in Randleman’s frozen yogurt stores and out of shopping carts on the D.C. streets to an established store. Since then, Raffa has brought his idea and delicious donuts to Athens as the second location celebrates nearly three months of business on Broad Street.

“The original idea came because I hated waiting in long lines for coffee, so we were thinking how can we put out self-serve coffee that’s good?” Raffa said.

But because of the store’s hype, patrons waited in lines extending out the door for the store’s opening May 23.

Taking inspiration from his mentor’s self-serve frozen yogurt machines, Raffa implemented this same technique for his coffee and then set to work cranking out ideas for hot, made-to-order and customizable donuts.

“When I was a student here, I worked with a lot of local organizations and charities, and I realized that there was this divide between them and the students. I felt like a lot more students would want to help, and they maybe just don’t know where to look,” Raffa said. “What I’m trying to do here at Zombie is fix that.”

According to a letter posted to Zombie’s website, every month the store selects three local charities or organizations with a good cause and sets up a series of vote boxes representing each one. Customers are allowed one vote per order, and the highest scoring charity at the end of each month receives 5 percent of overall sales from Zombie. In doing so, not only does Raffa raise money for these causes but also awareness.

“I always knew I wanted to do a business that was socially impactful and successful in part because of that,” Raffa said. “We have a great product, and people come for that, but they also realize we have a bigger goal. At the end of the day, my goal is to build a business that shows nonprofits can be successful.”

One of the organizations in mind for August is the Student Veterans Research Center. Originally contacted by the School of Social Work, director Ted Barco spoke on the actions Zombie has initiated and the influence it would have for the SVRC.

“Financial challenges are the biggest problems facing our non-traditional students. About half of them have dependence of some type, be it children or spouses,” Barco said. “We would translate this gift into awards and scholarships made available in the spring to students. 100 percent would go towards financial awards.”

Raffa predicts that the influence Zombie will make in Athens is one that will ensure the shop stays open for a long time.

“As someone who’s lived here and been in the community for a while, there’s a lot of things that this town wants and demands. Compared to D.C., Athens gets behind companies that are behind Athens. It’s that cyclically working community,” Raffa said. “Athens is a special place where everyone has your back. I’m here to help the community, and Athens is here to help me back.”

Julie Hong, a UGA public relations major and Zombie employee since its opening, said the drive to affect positive change is a major factor in the shop’s success.

“Tony is really passionate about giving back to the community, it’s part of his business model and ideal,” Hong said. “He believes that only once you give to the community will it give back to you, and that’s how we’ll see improvements.”

Barco agreed with this sentiment, saying it was a business model more companies should replicate to provide for their communities.

“I think that the fact that they’re giving back to the community in such a direct way through these donations has a profound impact whether on us or other organizations,” Barco said. “Waking up and receiving an unexpected donation, it’s a wonderful model. When you look at the numbers of corporations in Athens and further out, I’ve never seen another company do that.”

Since Zombie Coffee and Donuts opened May 23 in downtown Athens, crowds have flocked to the location in hopes of ordering the donut of their dreams.

Donuts are made-to-order and customers can build their own donuts with whatever icing or topping they desire. Fan favorites include chocolate M&M, vanilla rainbow, maple bacon and strawberry fruity pebble.

Back when Terrapin Beer Co. first debuted its Rye Pale Ale in 2002 it had many investors to get off the ground. However, in 2012 these investors backed out, leaving only a loan offer by Tenth and Blake, the craft and import division of MillerCoors, on the table.

Singer-songwriter Marc Scibilia will play the Georgia Theatre on Saturday with plans to showcase some of his new music. In an interview with The Red & Black, Scibilia discusses how he finds inspiration from what’s happening in the world.

Starting this fall, Jittery Joe's reign over on-campus coffee is coming to an end. Starbucks and Caribou Coffee are moving onto the University of Georgia campus, giving students more options when searching for a jolt of caffeine.

This year students and townies alike can welcome a lot of new sure to be hot eateries this fall. If you are in need of something new, there is a lot to look forward to this fall in Athens.