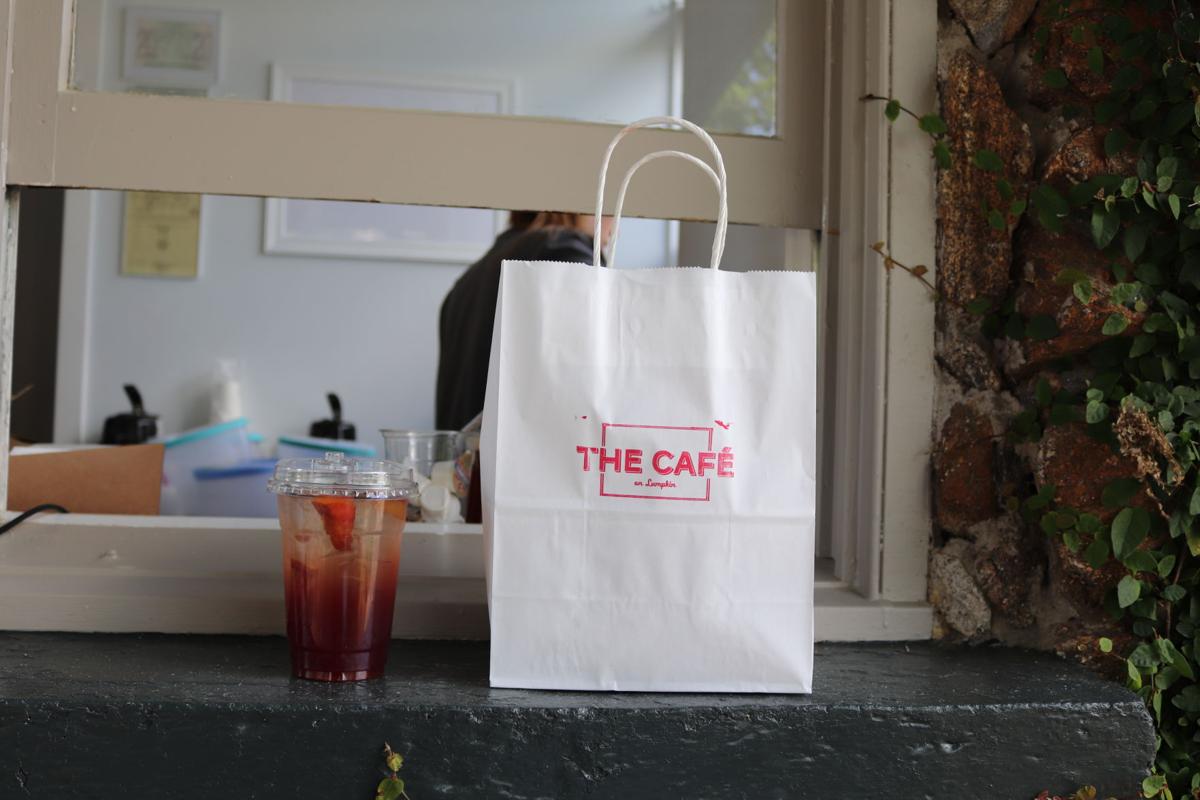 The Café on Lumpkin opened in Five Points neighborhood on May 1 for to-go orders. (Kyra Posey kyraposey@randb.com) 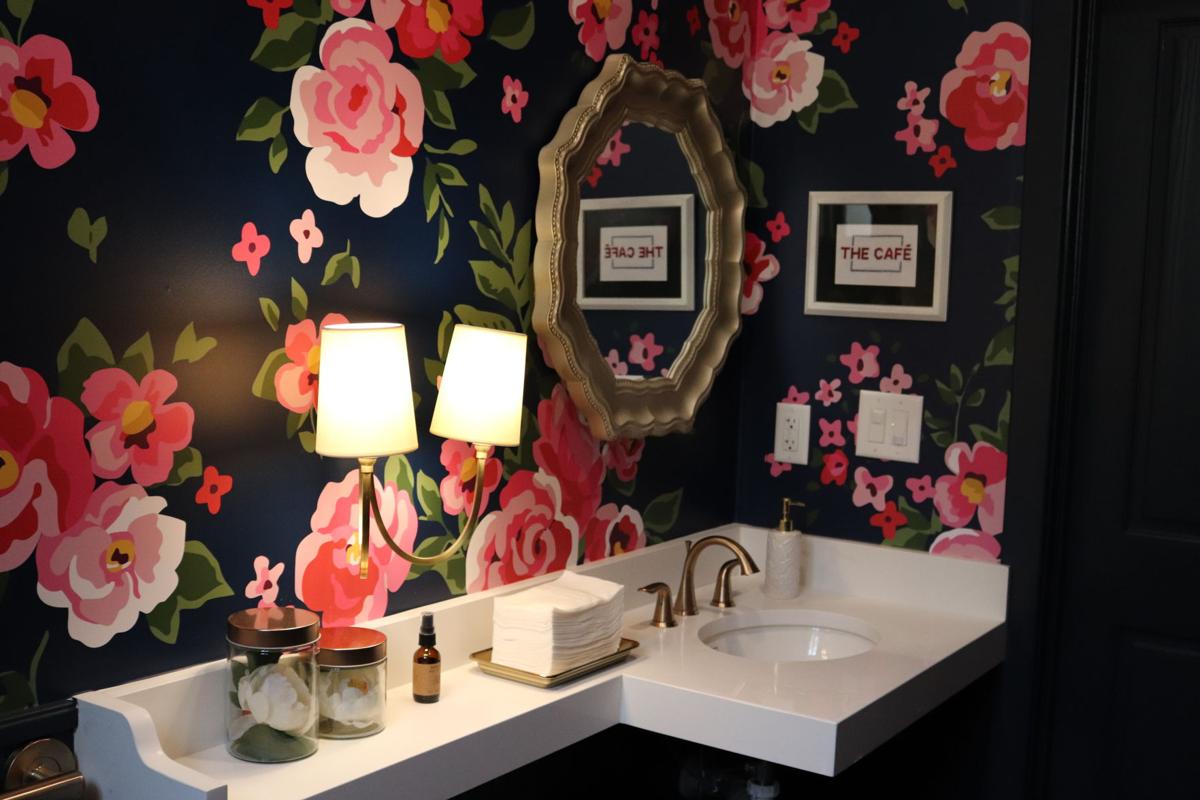 While the restaurant will have muted tones, the restroom is meant to be the “pop of color” at The Café on Lumpkin. The wallpaper is meant to complement the garden in front of the restaurant. (Credit: Kyra Posey, kposey@randb.com). 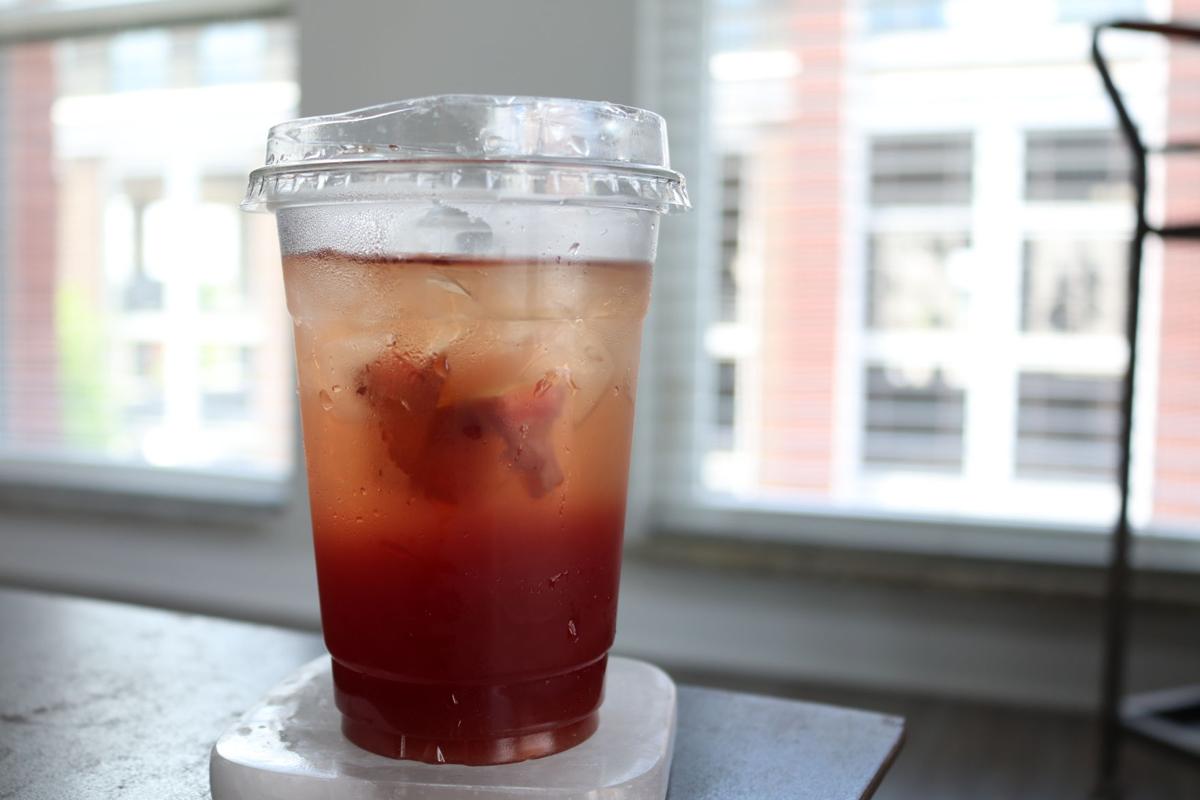 Non-alcoholic pomegranate sangria from The Café on Lumpkin offers a refreshing, light taste. The Cafe on Lumpkin opened on May 1, 2020 for take-out orders. The dining room of the teahouse and cafe will remain closed until further notice. (Credit: Kyra Posey, kposey@randb.com). 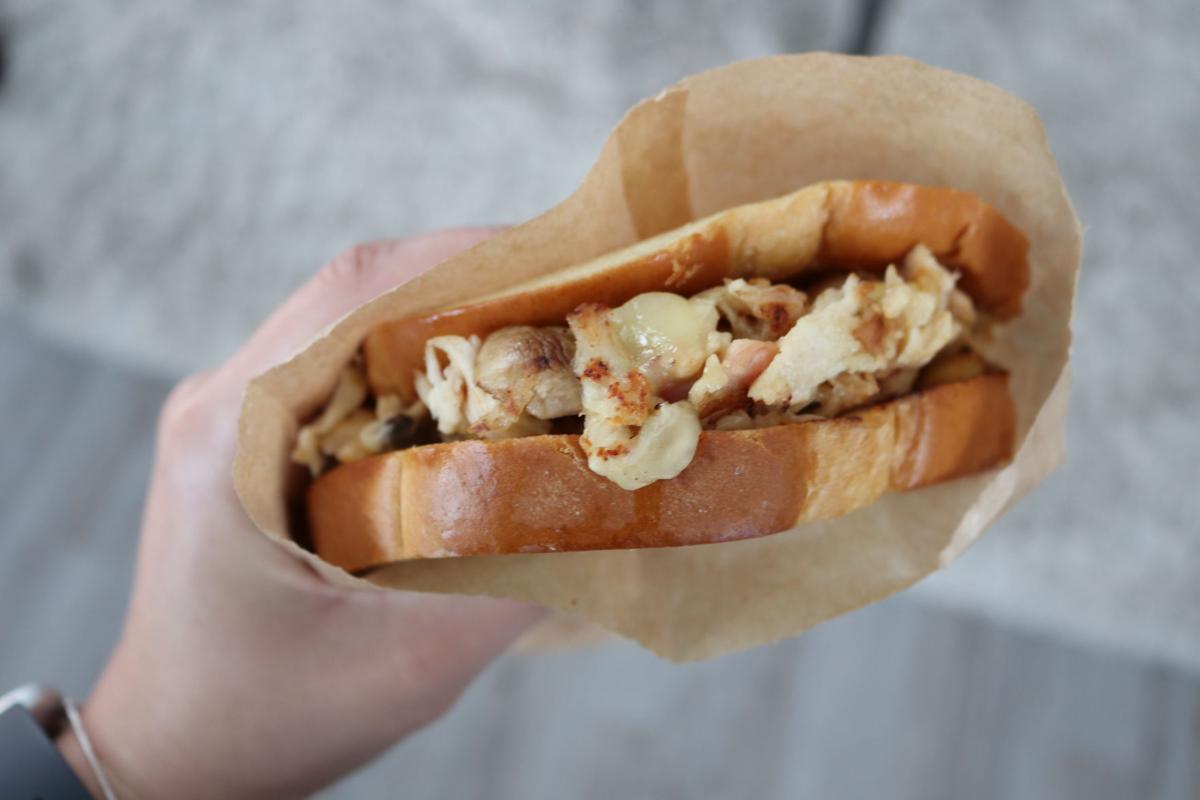 The Café on Lumpkin sells a variety of sandwiches, including the chicken and apple melt. The sandwiches at the cafe range from $6-$8. (Credit: Kyra Posey, kposey@randb.com). 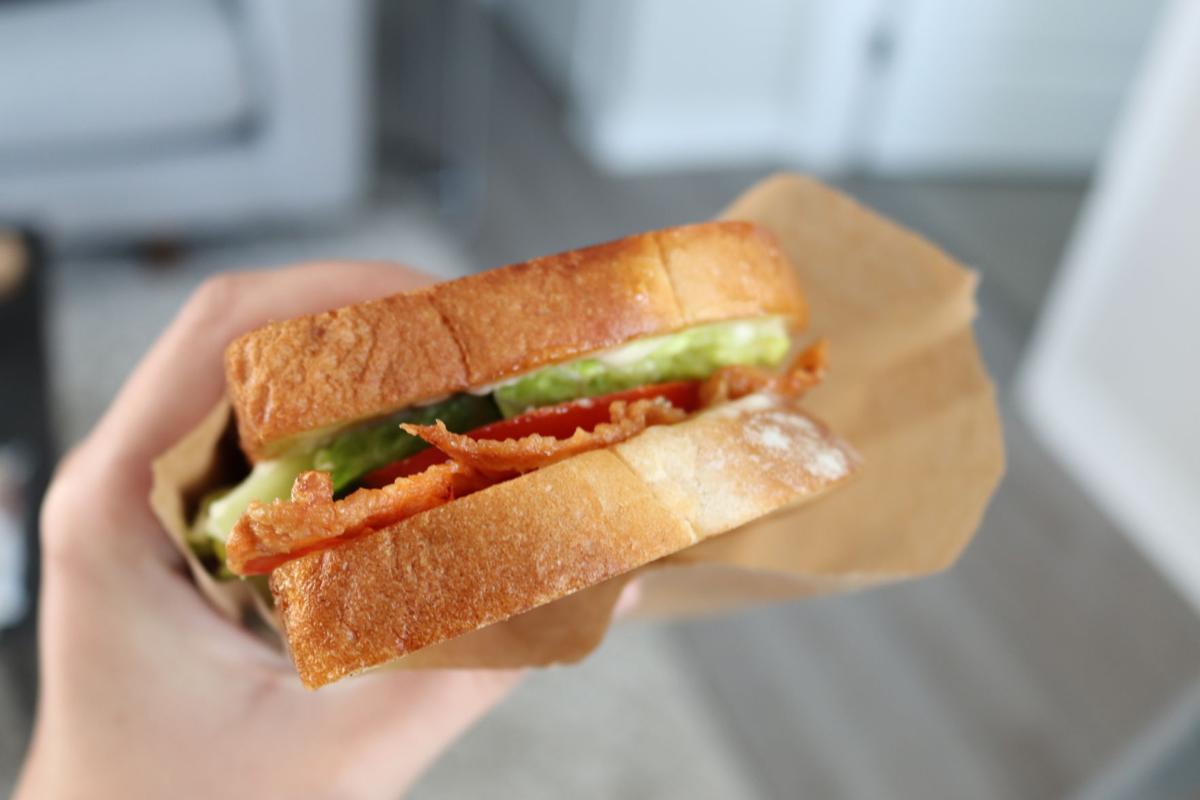 The Café on Lumpkin sells a variety of sandwiches, including the BLAT, which adds avocado to the classic BLT. The sandwiches at the cafe range from $6-$8. (Credit: Kyra Posey, kposey@randb.com). 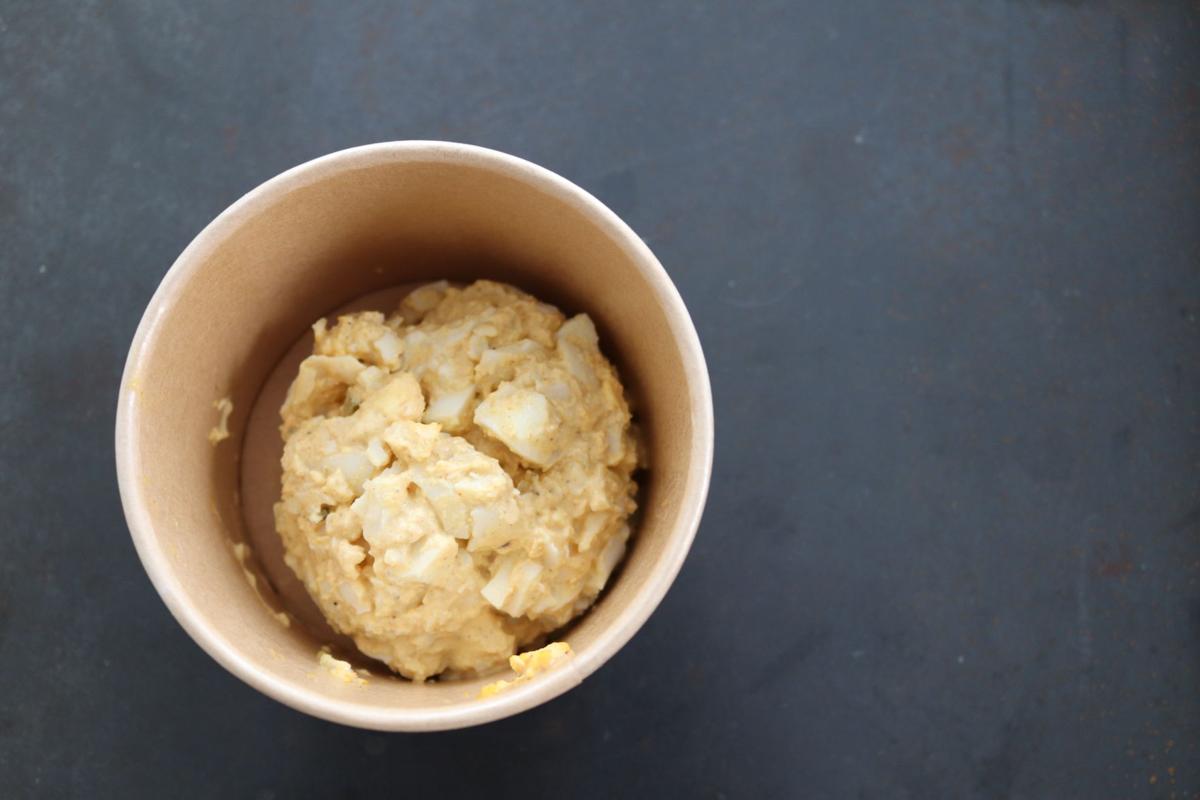 The Café on Lumpkin sells a variety of sides, including a scoop of egg salad for $2. (Credit: Kyra Posey, kposey@randb.com)

“This is not the grand opening we had envisioned,” reads a description on The Café on Lumpkin’s website. Rather than open and accommodate dining room guests, the café and soon-to-be teahouse opened on Friday, May 1 for to-go orders in order to uphold social distancing precautions.

The Café is currently housed in an almost-100-year-old house in the heart of the Five Points neighborhood. Employees are currently operating a to-go window in the front room of the restaurant, which owner Luke Martineac called “the nook.”

The dining room is closed until further notice, but when it is open, diners will be able to enjoy afternoon tea in the nook with a three-tiered small-bite plate, which will include tea sandwiches and scones with clotted cream. It will also host a weekend “evening repose” to complement the other restaurants in town, said Martineac, which will include small bites, self-serve beer and wine and mocktails rather than a full-fledged dinner.

“That way, if you’ve had a few drinks at Five & Ten, you can walk over here and cool down with a mocktail,” said Martineac.

Although the interior is not yet ready to accommodate guests, the restroom gives insight to the inspiration of the restaurant’s design. Martineac said, while the restaurant will have cool, muted tones in its design, the restroom is meant to be a “pop of color.” The flowers on the wall also tie in the herb garden in front of the building.

Until guests can enjoy their tea and breakfast or lunch inside of the café, though, they’ll have to eat their take-out packages at home. Orders can either be placed on their website or over the phone.

The Café plans on using fresh-grown herbs in its teas when they open, but for now, bags of a tea blend are for sale. Jittery Joe’s also made a specialty coffee blend for the restaurant, which is a medium roast with a chocolatey, full taste, said Martineac.

They also are currently selling non-alcoholic pomegranate sangria for take-out. The refreshing drink sells for $6 a cup. The slight carbonation complements how light the drink tastes, and although it certainly does lean on the sweet side, its sweetness isn’t overwhelming. This drink is the perfect fix for a summer’s day, which is ideal for the restaurant’s opening of its take-out window.

In regards to the cuisine offered at The Café, there are a variety of sandwiches available for lunch with a price range of $6-8.

One of the employees said her favorite was the chicken and apple melt, which includes roasted chicken, diced apples, cooked mushrooms, gruyere cheese and cheddar cheese. This runs for $8 and can be enjoyed either between two pieces of white toast or in a wrap.

This was delicious. The balance between the sharpness of the cheddar and the sweetness of the apple was immaculate. The pieces of chicken were hearty and the mushrooms added a pleasant touch. Although the toast was buttered, it wasn’t soggy. It’s filling enough to last until lunchtime, although it isn’t a heavy meal.

An almost-classic BLT is another sandwich on the menu, called the BLAT to account for the added avocado. It also was filling, yet light enough to not weigh you down after consumption. The thick-sliced tomato balanced the crispness of the bacon. The avocado was slightly unripe, but the other satisfying aspects of this sandwich were soon distracting from this fact. This sandwich sold for $8.

There are also a variety of sides available to order, including tater tots, bacon, mac & cheese and egg salad. An egg salad scoop costs $2 and includes boiled egg, paprika and chive. The chive adds a satisfying crunch to the mixture, which is perfectly creamy. The paprika also adds a lovely depth of flavor. It was hard to put down the fork after it was picked up.

After eating from The Café on Lumpkin once, this reviewer can’t wait to go back when the dining room is open. The café’s teahouse inspiration will surely be an appropriate complement for the string of Five Points restaurants and eateries which it joins and add something new (and necessary) to the neighborhood.

Nedza’s started delivering donuts and ice cream to the general public every Saturday amid the COVID-19 pandemic.

After its delayed spring opening due to COVID-19 social distancing restrictions, the Athens Farmers Market will open to the public on Saturday, May 9. Market manager Sarah Thurman provided an overview of the delayed opening day and safety precautions that will be in place.

Grocery shopping can be a bit of a hassle during the pandemic, but some restaurants in Athen…