Go Bar, nestled where Prince Avenue meets Pulaski Street, has hosted concerts, dance parties and drag shows for the last 20 years. The late-night venue will be making the transition to a restaurant, as announced in a Facebook post on Thursday, Oct. 10.

“We are hoping to be up and running sometime in the spring with a fresh look and new concept, and hope to see all our friends, old and new,” Tom Hedger, co-owner, wrote on Facebook.

The conversion of the space will occur after the new year. While it’s unconfirmed whether there will be live shows post-renovation, Hedger expressed concerns about future noise complaints in light of a new multi-use apartment complex being built across the street by Homes Urban, LLC.

Local Athens drag troupe, Athens Showgirl Cabaret, has been performing at Go Bar regularly for the past eight years. The owners of Go Bar told director Kellie Divine about the transition “a while ago,” in late summer 2019, and Divine said she was happy for the owners of the venue.

“Tom has been good to us for a long time,” Divine, known offstage as Kelly Phillips, said. “It was bittersweet when they told us, but the show must go on.”

Athens Showgirl Cabaret will perform at Hendershot’s on the first weekend of each month to accommodate the change.

Jenn Sparx, Athens Showgirl Cabaret’s assistant show director, has performed at Go Bar since 2013. While ASC has historically performed at the 40 Watt Club, That Bar (formerly Wayward downtown) and the permanently-closed Kumquat Mae, Go Bar is the “home bar” for Sparx, known as Trevor Ramsey off-stage.

“It was a staple for so many groups in the community,” Sparx said. “Tom’s had poetry readings, experimental bands … he’s into making sure that anyone from any community can have a place to perform.”

A look back: Go Bar hosts 20 years of drag shows and touring bands as an Athens staple

Over the past 20 years, Go Bar has lived at the corner of Prince Avenue and Pulaski Street. In this 2004 edition of The Red & Black, Go Bar is described as an “ethereal, Bowie-esque day dream.” The reporter wrote, “I sat motionless on my stool and felt a kinship between myself and the universe.”

Go Bar has hosted local and non-local performers from all genres. In 2005, the downtown joint hosted the Capes, a British pop band, for its U.S. tour. Dan Geller, who usually DJ’d at Go Bar, said that there was usually “a pretty big party” in the space. 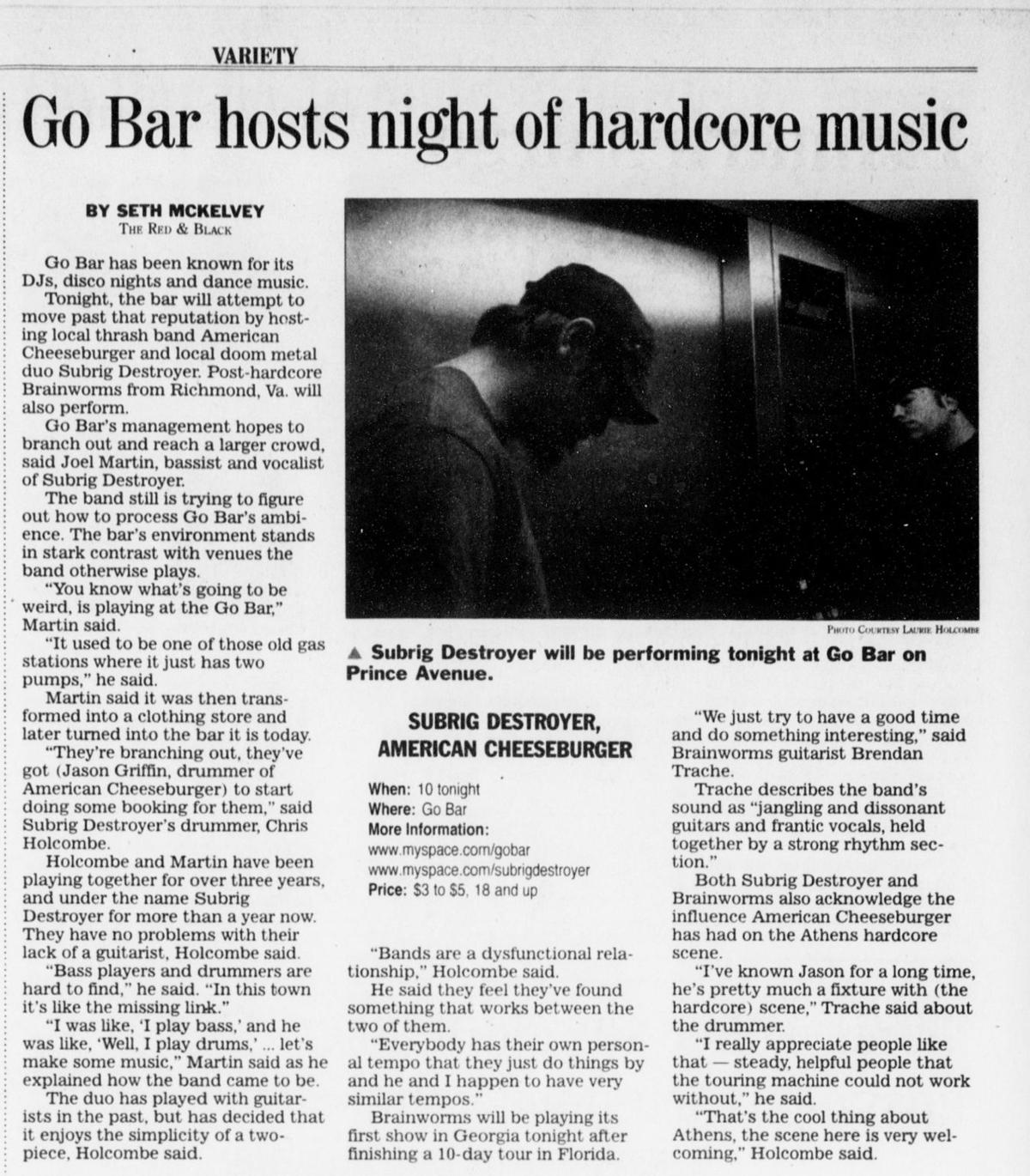 In January 2008, Go Bar hosted a night of hardcore music. The reporter wrote, “Go Bar’s management hopes to branch out and reach a larger crowd,” as the space had been previously known fro “DJs, disco nights and dance music.”

In a March 2008 edition of The Red & Black, Go Bar was described as hosting karaoke nights with “only 5,000 songs” to choose from. Other words to describe Go Bar were “indie hipness” and “quality quirkiness.” 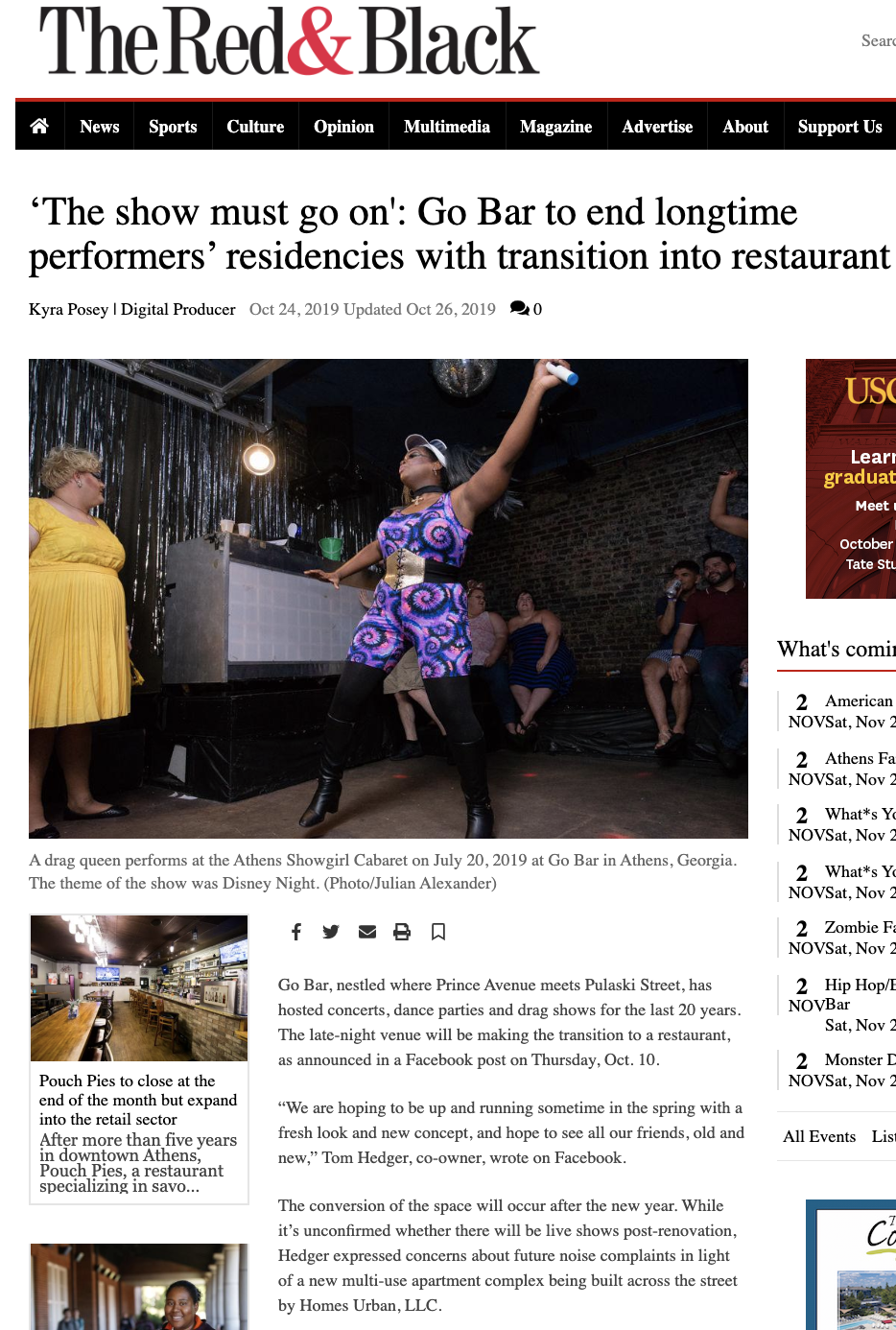 After 20 years of hosting all genres of bands, countless drag shows and fun weekend nights, Go Bar is changing its atmosphere to become a restaurant by spring 2020.

Though Athens boasts a thriving music scene, there’s a divide between rock and pop artists and the experimental and lesser-known music groups.

Hedger’s support for a variety of performance styles and genres has led groups in the local music scene to find their own home at Go Bar, according to Sam Lipkin. As the media and events coordinator for Volumes Hip Hop, Lipkin has worked with Go Bar for about a year-and-a-half, helping to bring hip-hop artists from around the southeast to venues in Athens.

Lipkin noted there’s a “Khaki line” downtown, describing it as an intangible border between where student life and townie activity separately thrive. This divide translates into the music scene, Lipkin said, and determines where certain acts choose to perform. As a result, the experimental music scene isn’t as welcome downtown as other music groups, Lipkin said.

While Lipkin is happy for Hedger, she said she’s sad to see the venue potentially no longer host music acts because Go Bar was “one of the only venues in town that lets the experimental side of Athens do whatever they want.”

Also, Hedger doesn’t charge bands to rent the space, and there aren’t any production costs — such as lighting — to perform at Go Bar, Lipkin said.

Hedger, co-owner of Go Bar, declined to interview with The Red & Black. Hedger will update The Red & Black “closer to the new year,” as there will be more concrete plans for the transition post-closure.

After more than five years in downtown Athens, Pouch Pies, a restaurant specializing in savo…

DOPE Artist Association started in the spring 2019 semester after Ariele Williams, a senior …

Originated from Bloomington, Minnesota, the dance punk band Remo Drive made its way down to …

Over the past year, Extra Special People, an organization based in Watkinsville, Georgia pro…

Rock climbing is known for being difficult because it’s both mentally and physically demanding, but that’s why University of Georgia junior De…

HalloWatt 2019 will deliver the ‘freaky side’ of Halloween

Halloween will be getting a fun, freaky twist with dancing and drag at the iconic 40 Watt Club.

Cities characterized by creative individuals, such as Hollywood and Nashville, showcase their claim to fame with a walk of fame. The Athens mu…

Review: Hippo Campus had the crowd on its feet in a packed out Georgia Theatre

Fans stood in a line that wrapped from Last Resort Grill to the entrance of the Georgia Theatre as rain came down, but the weather didn’t stop…