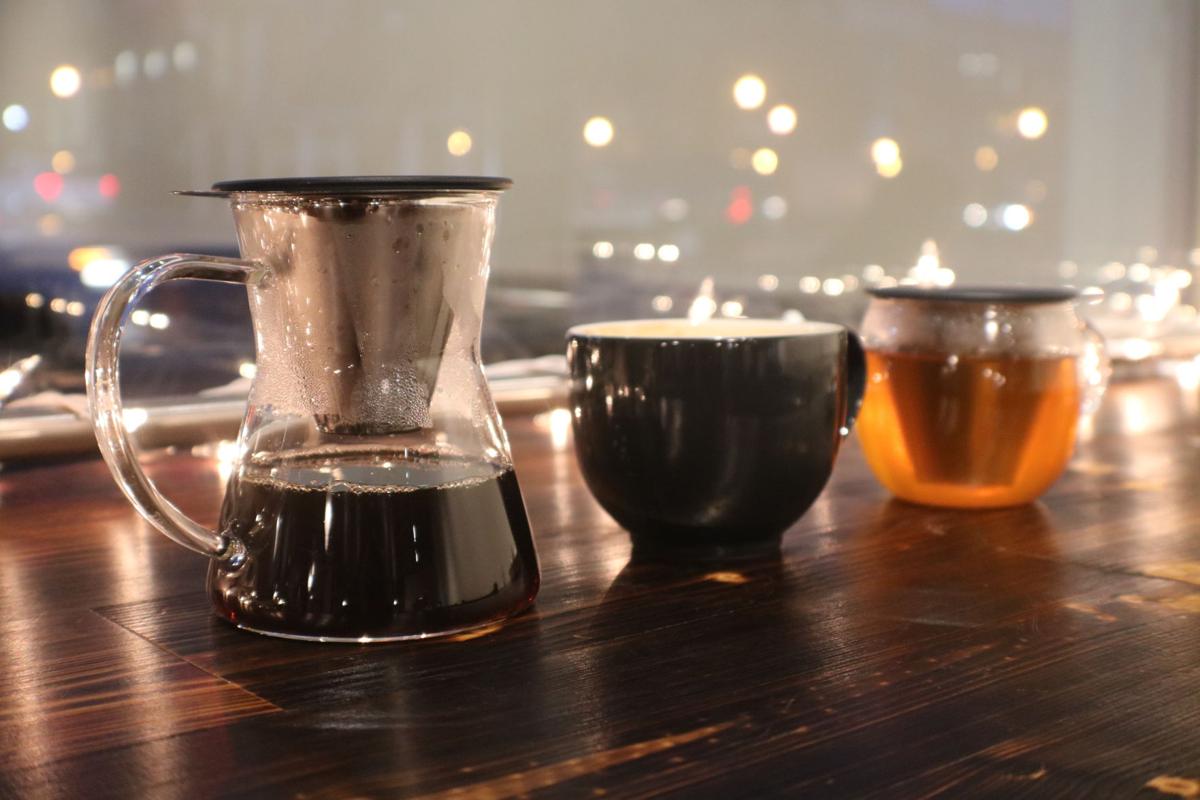 Three fresh, hot beverages are served at the Franklin House Cafe on Jan. 21. People can choose to order coffee or tea at the restaurant. 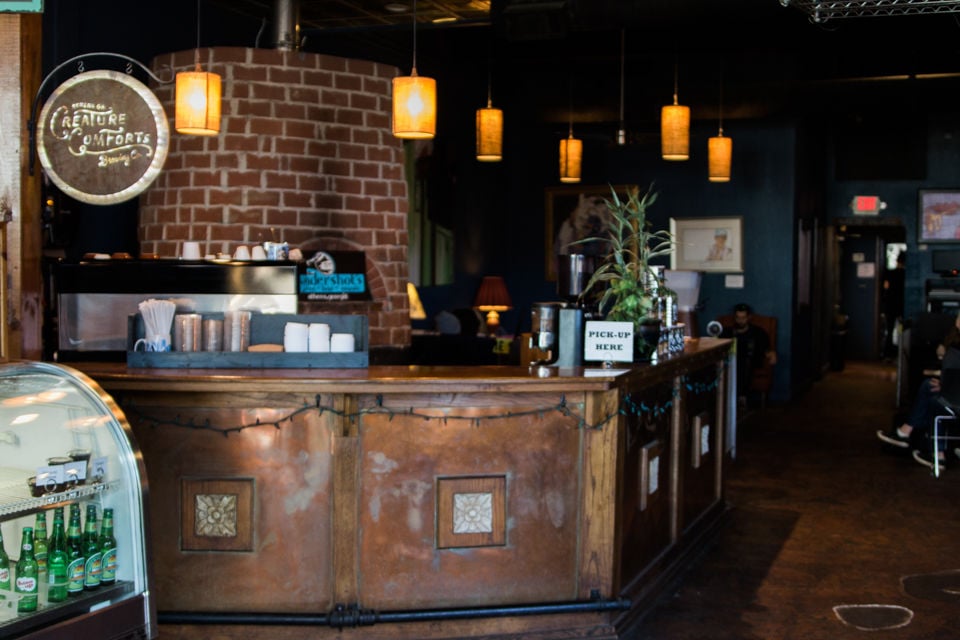 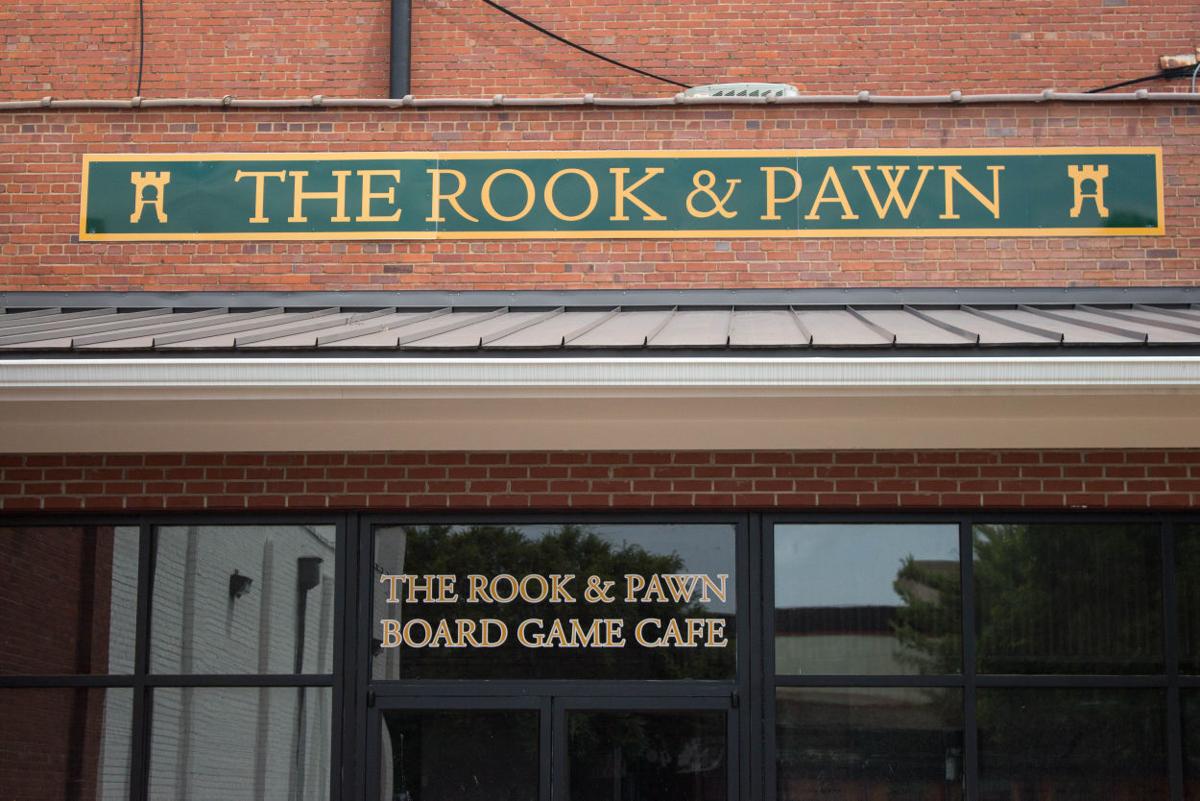 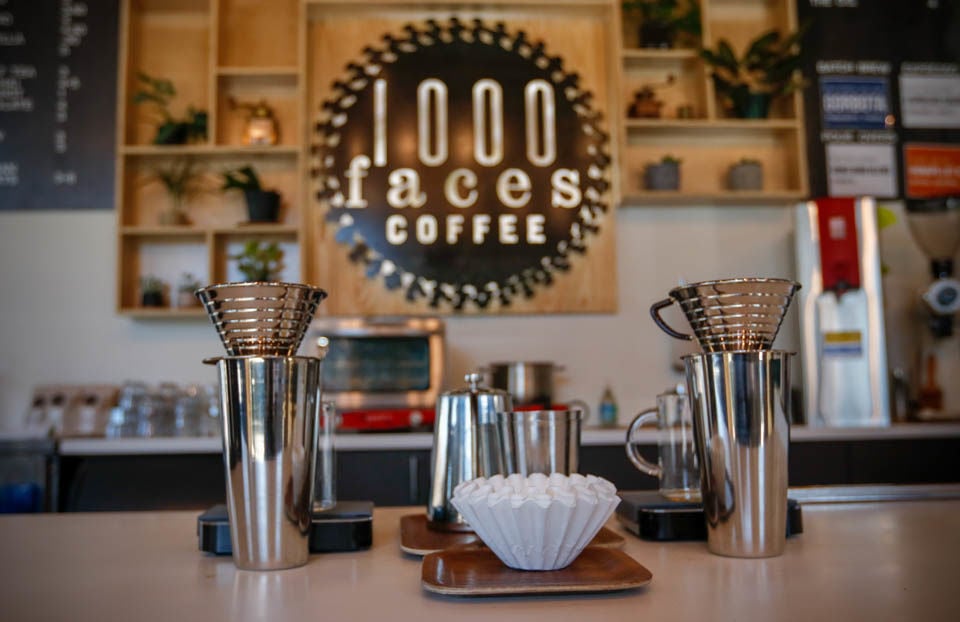 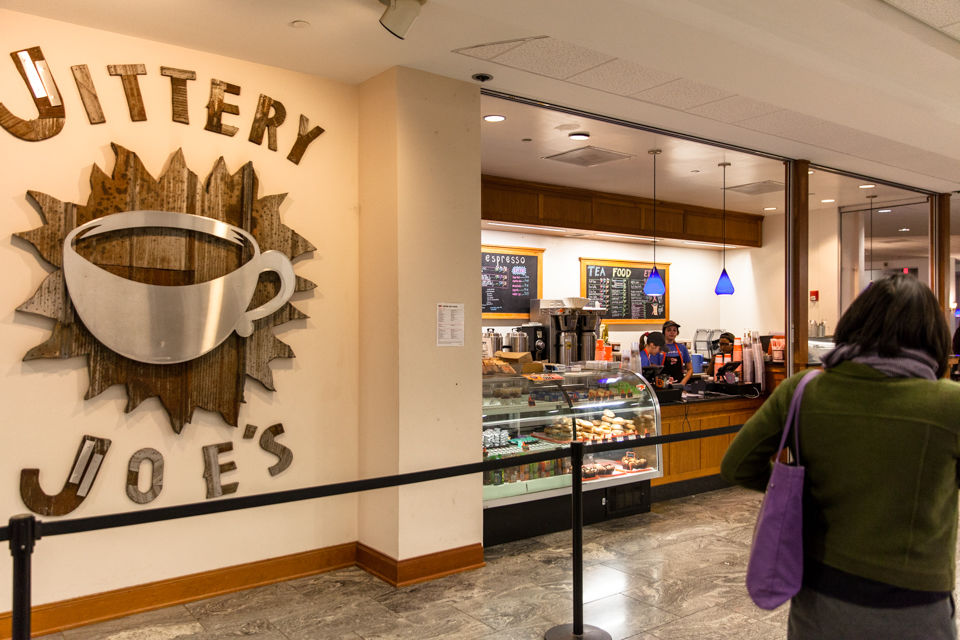 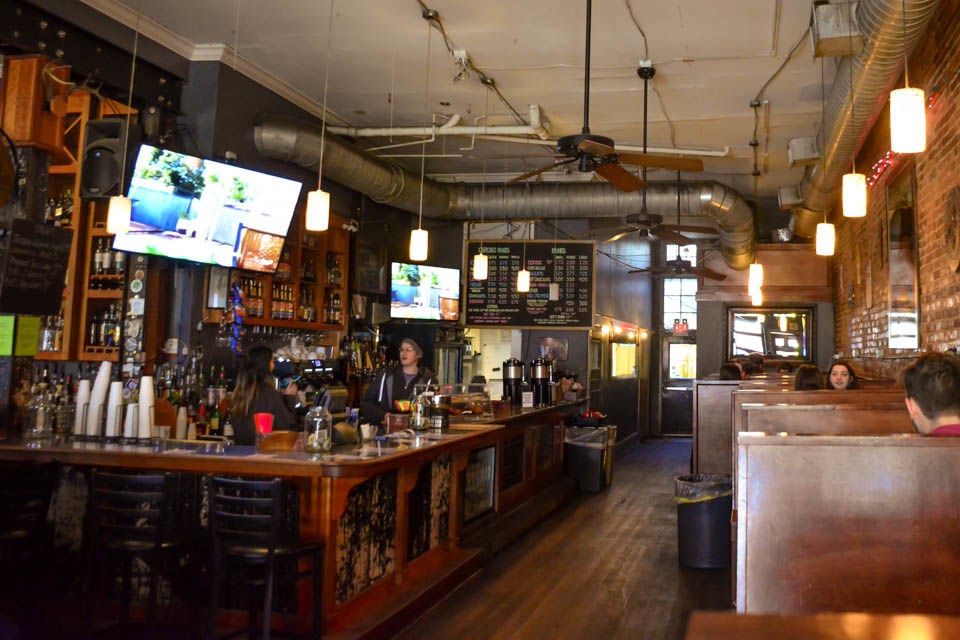 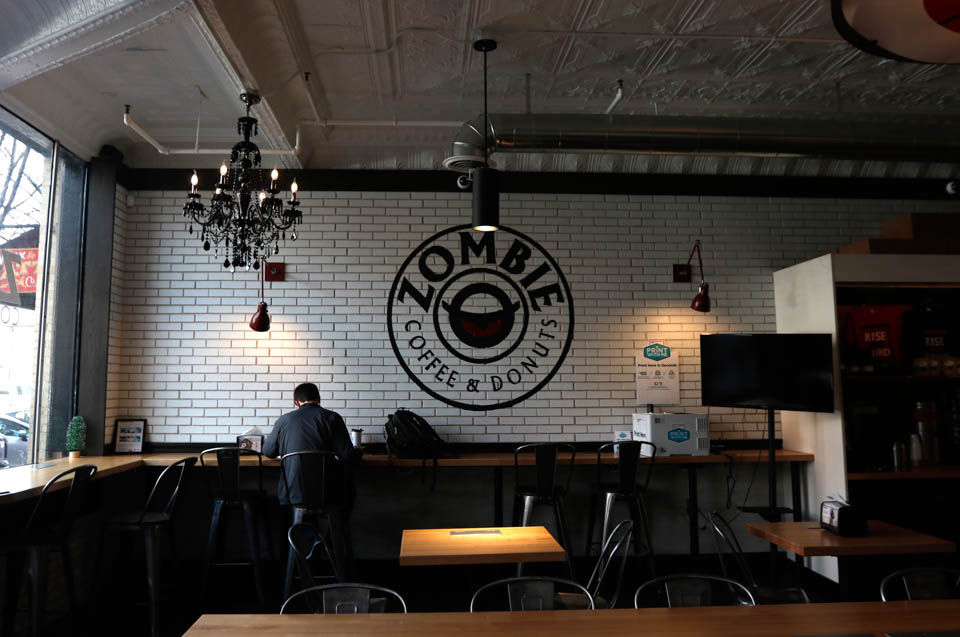 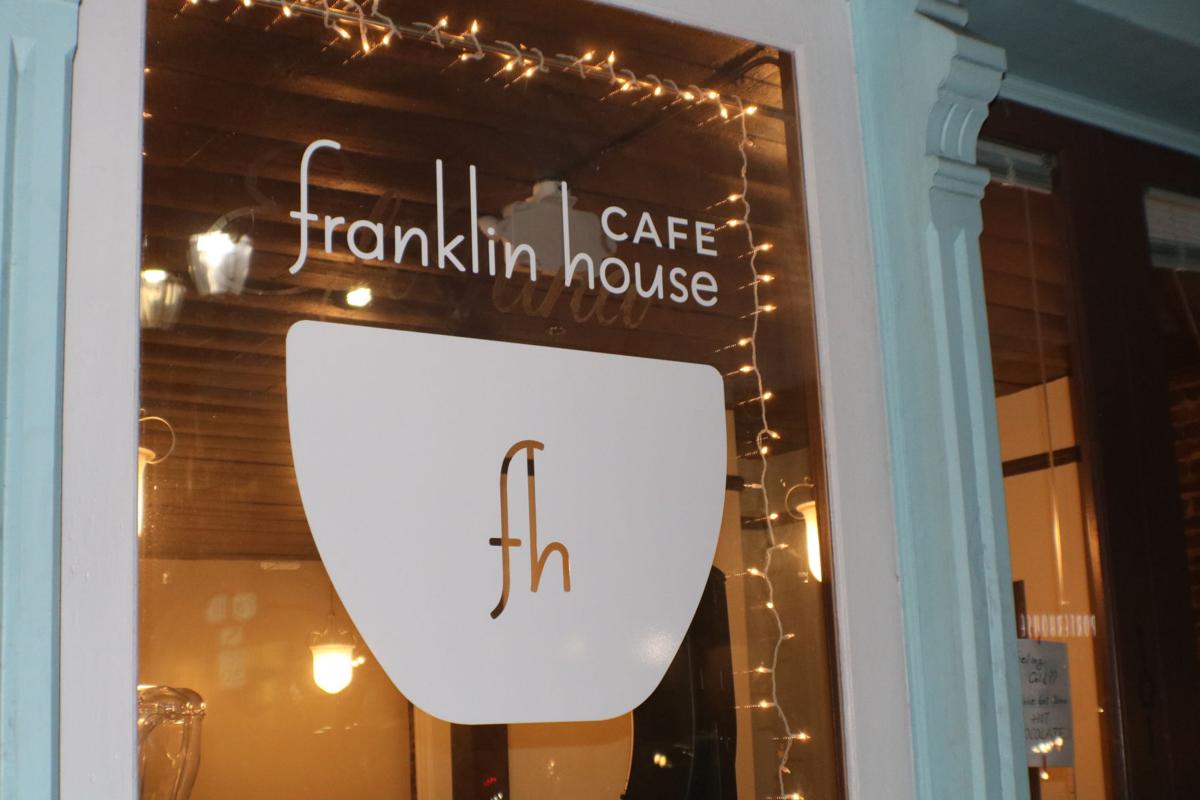 The Franklin House Cafe opened their doors to the Athens community on Jan. 5. 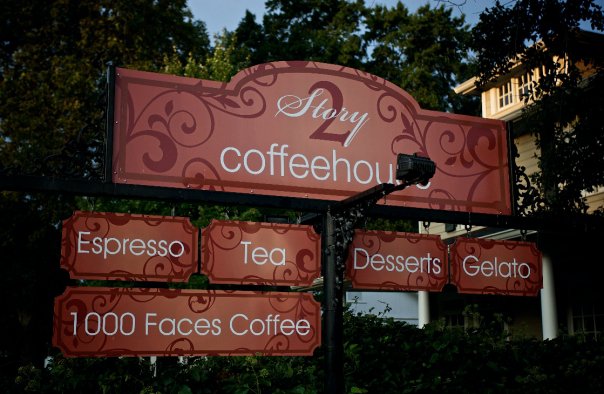 If there’s one thing Athens is good at (besides music, food and community), it’s coffee. There are an endless number of cafés and coffee shops, many clustered together downtown and others spread out throughout the city.

Below is a ranking of Athens’ finest coffee shops.

Battle of the Brews

This Athens favorite is filled with mismatched chairs and couches, surrounded by walls stacked with art from floor to ceiling. The dimly lit venue, filled with warm, aromatic coffee, lends itself to much more than just a coffee shop.

This shop not only slings traditional coffee drinks, it slings something a little stronger too. This coffee-shop-bar duo is a creative venue throughout all hours, even late into the night, hosting live music and performances from midday to right around midnight on weekends.

Located on Prince Avenue, Hendershot's is a roomy space in The Bottleworks, serving up not only hot coffee but also bite-sized eats including Bavarian pretzels with honey mustard and Hendertacos.

This one came as a curve ball.

Though not usually considered a coffee shop, The Rook & Pawn has an impressive collection of coffees to choose from, in addition to the endless board games covering the wall from floor to ceiling.

One of the most popular drinks is the Cubano Con Leche, which is brown sugar pulled through an espresso shot with steamed milk and froth to top. If you're looking for something more traditional, The Rook & Pawn also offers lattes, fresh pour overs, iced coffees and a multitude of espresso drinks, along with a host of teas.

While there are tables and chairs lining the walls and ample outlets to accompany them, the antique couches, chairs and lamp near the back of the restaurant are the best seats in the house.

Avery Waters, a sophomore communication sciences and disorders major at the University of Georgia, highly recommends The Rook & Pawn.

“It’s a very unique place,” Waters said. “The staff is so friendly, and it’s just nice to sit and get a coffee then read or play one of their many, many board games.”

Waters recommended a simple coffee over ice with a pump of caramel and added, “It was delicious.”

For those with a soft spot for being eco-friendly, this one is for you.

1000 Faces is as delicious as it is sustainable. The coffee merchant is dedicated to their mission, which includes a future with “more consumers being mindful about their coffee consumption” and strongly believes “respect for geographic origin, direct relationships and ecological awareness is the basis for creating a more sustainable coffee culture.”

That being said, though 1000 Faces is located on 510 N. Thomas St., they also often sell their product at various farmer’s markets, including the Athens Farmers Market, the Freedom Farmer’s Market and Grant Park Farmer’s Market.

If you've been in Athens for more than a week tops, you've heard about, and probably tried, Jittery Joe's by now. With the risk of sounding extreme, Jittery Joe's made Athens the coffee town that it is today.

As an Athens staple, JJ's has a location on nearly every block. OK, not every one, but there are 12 locations in the city alone. In fact, Jittery Joe’s started in Athens next to 40 Watt in the early '90s.

Want another fun JJ’s fact? The business got its name from a fictional restaurant called “Jittery Joe’s” in an episode of “The Simpsons.”

Preciosa Bulauan, a sophomore majoring in microbiology, said Jittery Joe’s is her “go to.”

“I like it because it’s basically a Dunkin' [Donuts] at a cheaper price. I also like supporting small businesses,” Bulauan said.

“I always see that Jittery Joe’s sticker around on campus too. I know it’s really popular,” she said. “To me, it’s a traditional Athens staple.”

Although the atmosphere can be a little overwhelming and noisy for avid studier or book worms, Walker’s is another downtown classic. Walkers has both an upstairs and a downstairs, and a secluded hallway for those needing to steal a quieter spot for studying.

Oh and did we mention it's in a prime location? Walker's is situated right across the street from North Campus in the heart of downtown.

Similar to Hendershot's, Walkers is a café by day and pub by night. Walker’s offers a host of delicious coffees (and later, satisfying beers). From lattes to organic teas, they have it all. The shop even offers their own muffins, croissants, scones and bagels.

Though it can be a great workspace, students looking to get some homework done at Walker’s had best come early or hope they get lucky finding a seat.

Calling all sweet tooths, this one's for you.

Another plus? Zombie has great Wi-Fi connection and, with outlets built into the tables, giving you plenty of places to charge your devices. And let's face it, Wi-Fi and outlets are a dealbreaker for good coffee shops. The shop is usually on the quieter side and offers a relaxing environment to get some work done.

As the new kid on the block, it's worth checking out Franklin Coffee House off West Broad downtown. Typically very quiet, Franklin House Cafe is a satisfying place to get a chunk of your work done.

The seating choices bring a homey feel to the venue with expansive wooden table shared community style with other coffee-sippers. Though it can get pretty packed, Franklin is an inviting space with a promising number of electrical outlets.

They offer everything from espresso and drip coffee to fresh pastries and other delectables. The shop also has weekly specials, which showcase both drink and food deals.

Ah, rest in peace Two Story. Once located in the beautiful Five Points area on Lumpkin Street, Two Story was an incredible coffee powerhouse until it was permanently closed in 2017, much to people's’ disappointment.

Two Story's inside felt like a storybook, full of unmatching antique chairs, books shoved into narrow built in bookshelves and an expansive patio. It even had an entire back parking lot. We are all still crying a little after this one.

“I’ve never actually been to Two Story,” she said. “But I always heard about it from my upperclassmen friends. I was a freshman when it closed down, but I remember the weekend it closed because it was all over the news and my friends were upset.”

Indeed, many students and Athens locals were crushed when the business moved out of the Five Points area. The shop will be remembered by their impressive array of coffees and their distinctly flavorful brews. However, until Two Story moves into a new location, the coffeehouse will forever remain in locals’ minds and hearts.

The Powers is a whole family affair. This edgy Ameriana rock band is made up of two brothers…

Competitive athletes will be taking over Athens this weekend. This time, however, it’s not f…

The 2018 World Cup is winding down as the tournament races into the semi-finals. In a tourna…

Secret spots to explore on and off UGA’s campus

Summer in Athens is full long, hot days and a nearly-abandoned campus and downtown, basically begging those who stayed in Athens to explore. The University of Georgia’s campus and the city of Athens offer an abundance of hidden gems and secret spots to spend some of your lazy summer hours.

For the foodies: 8 new, upcoming restaurants to try in Athens and at UGA

Athens is littered with construction, per any summer in this college town, and some of this work will bring new dining options come the fall s…

It’s been decades since big-name bands like R.E.M. or the B-52s played in the Classic City. However, with the recent approval to construct a 1…

Vernon Thornsberry began nurturing his creative spirit in a tin shack with no electricity on Esplanade Avenue in New Orleans. During the winte…

Kayaking, local musicians and chess at fourth annual Rhythm on the River

Lemuel LaRoche feels at ease when playing a game of chess. To him, chess is a game of intense thought and concentration that can translate int…

6 summer albums for music lovers of all genres

If you’re tired of the typical summer jams, look no further. This summer has brought a slew of new albums to choose from with bops ranging fro…

Six tattoos inked across the upper arms and shoulders of Tara Stuart were clearly visible on the exposed skin uncovered by her black tank top.…

On Thursday night, July 12, the sounds of Americana rock filled The Foundry. 6 String Drag took to the stage for the opening night of a 10-day…

Surviving student residence halls: Tips for incoming freshmen about living in the dorms

University of Georgia students will soon be filling up the rooms of campus residence halls. While most upperclassmen have moved on to off-camp…

When Serra Jaggar first started Indie South, it was with dreams of creating a space to help foster the creative and crafts community in Athens…

OPINION: Get a part-time job this semester

With all the opportunities to get a job on-campus, students should find the best method for them. Opportunities exist at the Part-Time Job and Internship Fair (Aug. 15), on Handshake and in many UGA organizations.

Students tend to concentrate in the main study hubs of campus such as MLC, Tate Student Center or the Main Library. Diversify your study spots to lessen traffic in these locations and to find your own unique place to study on campus.

Why carry around a notebook and textbooks when technology becomes more convenient for education?

OPINION: UGA students are forgetting the value of their education

UGA is a strong institution with highly qualified professors and education potential. However, students forgo a strong potential education by chasing easy A's at this university.