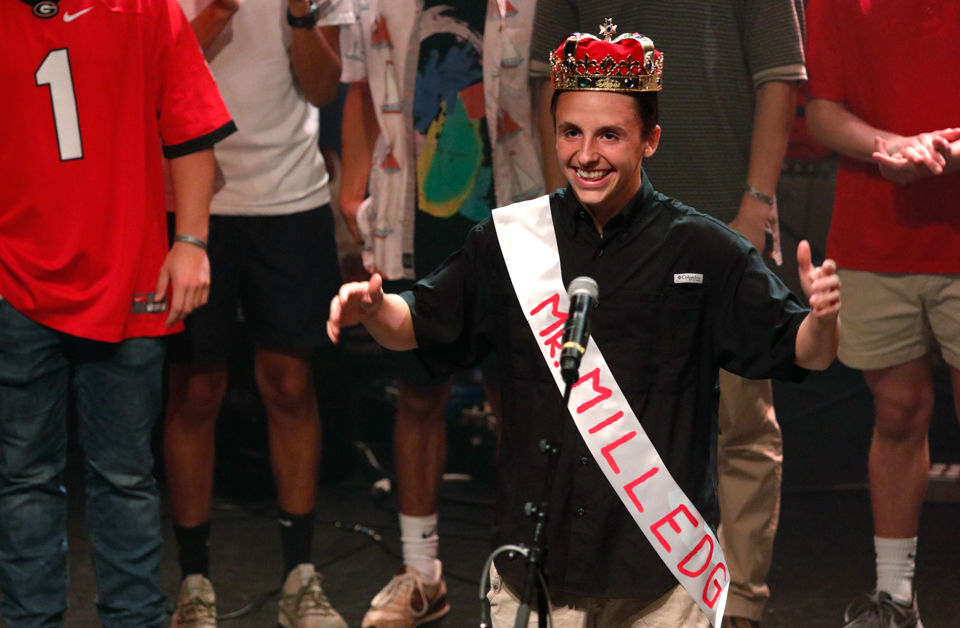 Caleb Ellison, a Theta Chi member at the University of Georgia and participant in the 2018 Mr. Milledge pageant, smiles at the crowd after being crowned as Mr. Milledge on Tuesday, September 11, 2018, at Georgia Theatre in Athens, Georgia. Mr. Milledge is a philanthropic men’s pageant which benefits the Alpha Gamma Delta Foundation that supports Meals on Wheels and Feeding America. The pageant is open to men from fraternities and other campus organizations from the University of Georgia. (Photo/Miranda Daniel, mirandadanielphoto@gmail.com) 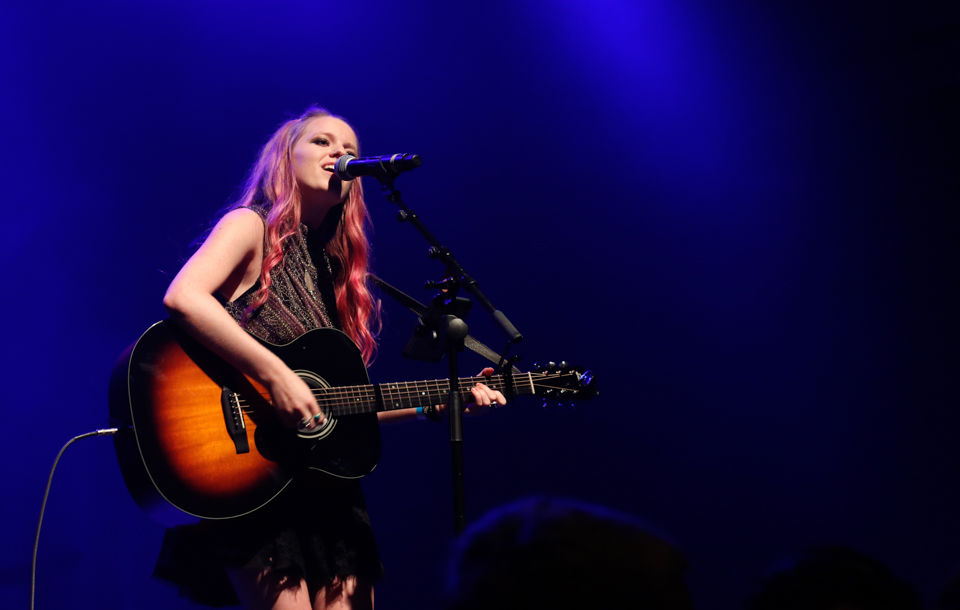 Aspen Countryman, a singer and songwriter and University of Georgia student, performs before the 2018 Mr. Milledge pageant on Tuesday, September 11, 2018, at Georgia Theatre in Athens, Georgia. Mr. Milledge is a philanthropic men’s pageant which benefits the Alpha Gamma Delta Foundation that supports Meals on Wheels and Feeding America. The pageant is open to men from fraternities and other campus organizations from the University of Georgia. (Photo/Miranda Daniel, mirandadanielphoto@gmail.com) 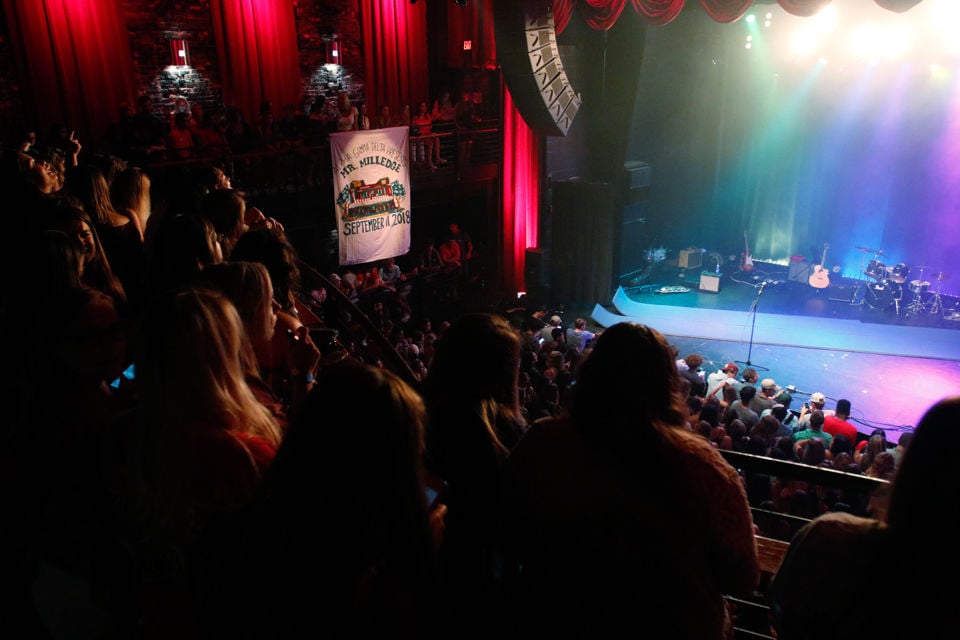 The 2018 Mr. Milledge pageant drew a large crowd at the Georgia Theatre on Tuesday, September 11, 2018, in Athens, Georgia. Mr. Milledge is a philanthropic men’s pageant which benefits the Alpha Gamma Delta Foundation that supports Meals on Wheels and Feeding America. The pageant is open to men from fraternities and other campus organizations from the University of Georgia. (Photo/Miranda Daniel, mirandadanielphoto@gmail.com) 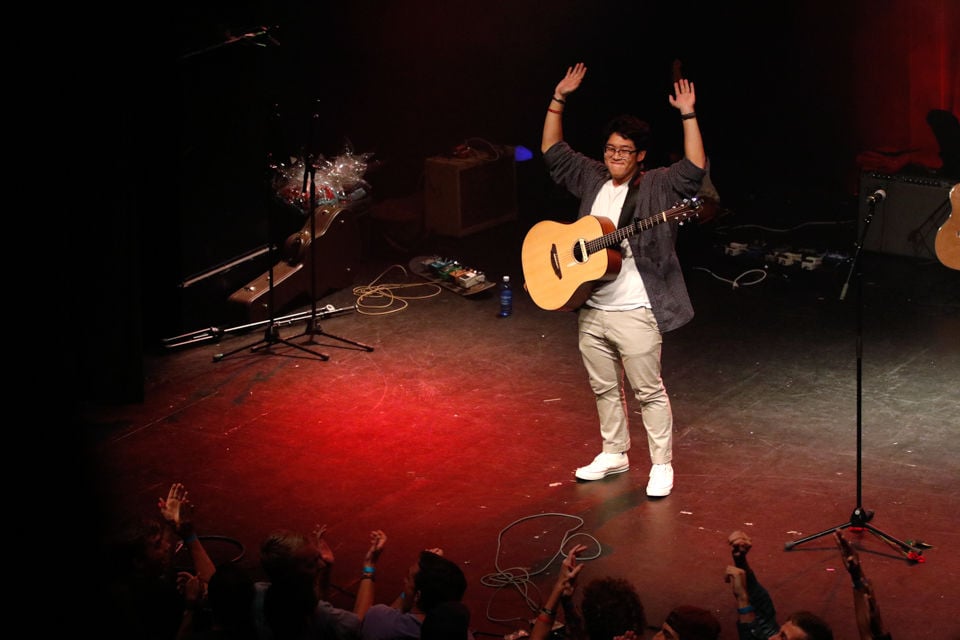 Nick Cho, a member of Beta Upsilon Chi at the University of Georgia, reacts to feedback from pageant judges and the crowd after performing a Sam Smith song for the talent portion of the pageant at the 2018 Mr. Milledge pageant at Georgia Theatre on Tuesday, September 11, 2018, in Athens, Georgia. Cho later won Mr. Congeniality for the 2018 pageant. Mr. Milledge is a philanthropic men’s pageant which benefits the Alpha Gamma Delta Foundation that supports Meals on Wheels and Feeding America. The pageant is open to men from fraternities and other campus organizations from the University of Georgia. (Photo/Miranda Daniel, mirandadanielphoto@gmail.com) 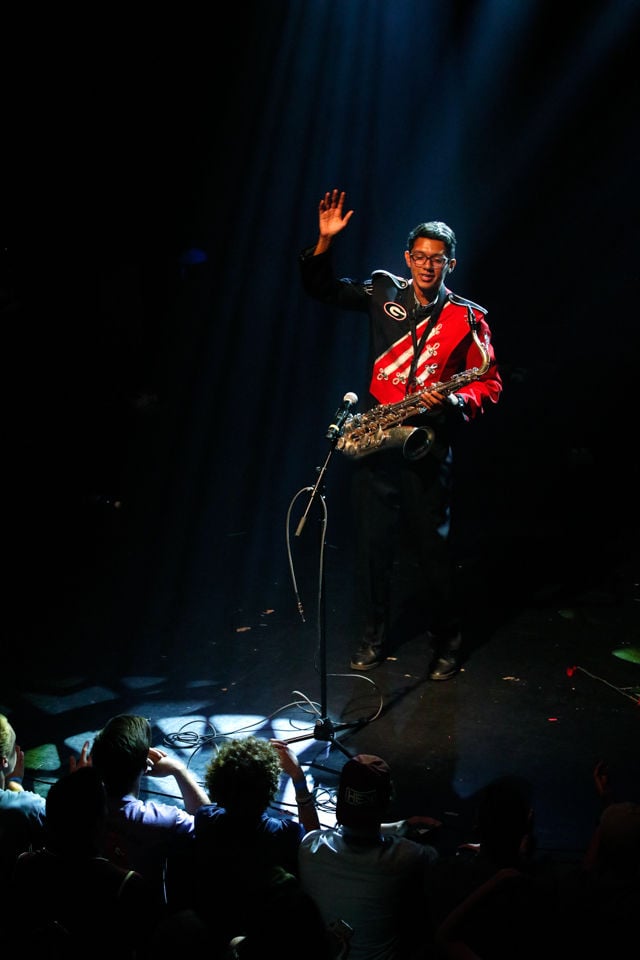 Oscar Campos, a Phi Kappa Psi member at the University of Georgia and participant in the 2018 Mr. Milledge pageant, performs songs associated with the Georgia Redcoat Marching Band for the talent portion of the pageant on Tuesday, September 11, 2018, at Georgia Theatre in Athens, Georgia. (Photo/Miranda Daniel, mirandadanielphoto@gmail.com) 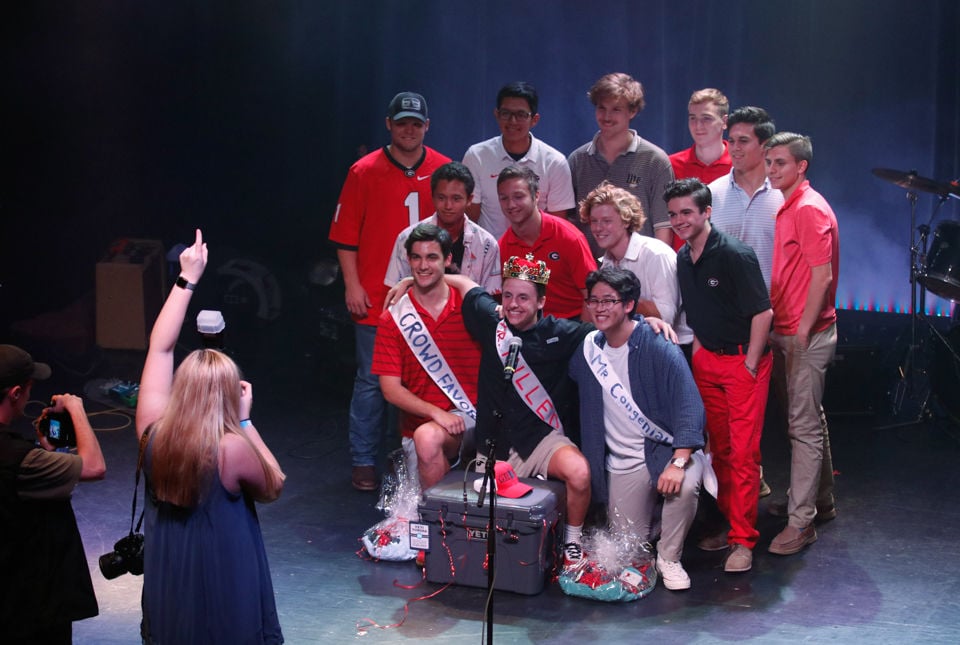 Participants in the 2018 Mr. Milledge pageant pose for a photo after winners were announced on Tuesday, September 11, 2018, at Georgia Theatre in Athens, Georgia. Mr. Milledge is a philanthropic men’s pageant which benefits the Alpha Gamma Delta Foundation that supports Meals on Wheels and Feeding America. The pageant is open to men from fraternities and other campus organizations from the University of Georgia. (Photo/Miranda Daniel, mirandadanielphoto@gmail.com)

Tuesday night, Sept. 11, found the Georgia Theatre filled with music, laughter and cheers as Greek students gathered for the 7th annual Mr. Milledge pageant. Students representing many University of Georgia sororities and fraternities showed up to have fun and support a cause.

The event was hosted by Alpha Gamma Delta, and all the proceeds went to the Alpha Gamma Delta Foundation. The foundation helps support Meals on Wheels and Feeding Athens. By the end of the night, $10,000 had been raised for the event.

As people filed into the theater, attendees were dressed in everything from T-shirts to evening gowns. The fraternity men were excited from the beginning and rushed to the front. Freshman J.P. Efferth said he and his friends from Beta Upsilon Chi came to support Nick Cho, one of the participants in the pageant.

As the space began to fill, performer Aspen Countryman performed several covers and originals for the audience. She set off the night with a clear voice and fun style that had many audience members singing along. Countryman even remarked on the enthusiasm of the front row.

“I don’t know if it’s possible to get any more hype than this front row,” Countryman said.

The front row gave as much as they got and chanted “Mrs. Milledge” as she walked offstage.

By the time the contestants came out, the anticipation had reached its highest level yet. Each contestant was judged on three categories: best gameday outfit, best pickup line and best talent. They could win Mr. Milledge, Mr. Congeniality or Crowd Favorite, which was determined by how many likes their post got on Alpha Gamma Delta’s Instagram account.

The gameday outfits ranged from formal to bizarre. Some of the more notable outfits were the shoulder pads and heelies worn by Xander Davis, who pitched his dog’s Instagram account, and Oscar Campos, who came out in his Redcoat Marching Band uniform. The judges didn’t hold back on criticism or humor. They took points off for the outfit being too “basic” and one thanked Campos for his service when he came out in uniform.

The second category, best pickup line, went much the same way. Each contestant took the microphone and recalled their best pickup line to three girls onstage. While some were sweet and clever, many were obscene or bizarre. The judges were just as brutal in this category. One of the judges gave contestant Jared Zimmerman a low score because she said it sounded like he Googled his line. James Tuten got the biggest crowd reaction with his sweet pick-up line. He handed one of the contestants a bouquet of roses and a mirror.

“I gave you 11 roses and a mirror so every morning when you wake up, you can see the 12 most beautiful things in the world,” Tuten said.

Zimmerman started off the talent section of the event with a bang. He started out with some backflips, but followed up with breakdancing, calisthenics and back layouts, which are essentially backflips where the body is stiff, but fully extended. He set the bar high and not many met it. Many of the other acts were silly but had their own charm. Davis did an amazing dance routine including the sprinkler, riding a lawn mower and going shopping.

There were several musical performances. Though it was evident that some of the contestants need vocal training, the performances went smoothly and the crowd was very supportive of the artists.

When Campos came out with his Redcoats uniform and a saxophone, he joked that he had beaten up a Redcoat to steal the uniform. He led the crowd in game day cheers, which went over well with the already-excited audience. Tuten impressed again with an original country song which appealed to everyone in the audience.

“I don’t even listen to country and I’m a fan,” one of the judges said.

When it came time for the awards, the crowd was more excited than ever. Davis, representing Phi Kappa Tau, won Crowd Favorite. The title of Mr. Congeniality went to Cho from Beta Upsilon Chi. Finally, the title of Mr. Milledge — and a Yeti Cooler — went to Caleb Ellison from Theta Chi.

Rush: A stressful time for college women who want to join a Panhellenic sorority. Sororities…

Classical Music. Some love it. Some hate it. And some just love to hate it. Whatever your fe…

Shannon Purser, also known as Barb from “Stranger Things,” stars as Sierra in the most recen…

BEST OF: Georgia vs. South Carolina

Lights burst onto the stage, illuminating five figures. Music filled the 40 Watt Club and an…

Stand-up comedy is all about bringing communities together and creating a fun, lively atmosphere that’s filled with laughter and storytelling.…

Spending a day with insects may not be everyone’s cup of tea, but this event is so much more than that. Insect-ival is an event held every yea…

A single spotlight shined against the red velvet curtain and a microphone stand stood center stage, ready for a speaker.  On Wednesday, Sept. …

Zeta Tau Alpha was crowned first place at Delta Tau Delta’s Sound of Milledge on Feb. 19 at the Georgia Theatre after a cohesive production in…

Delta Tau Delta fraternity hosted the annual Sound of Milledge at the Georgia Theatre on Tuesday, Feb. 19 in Athens. Proceeds went towards fun…