You are the owner of this article.
Edit Article Add New Article
You have permission to edit this article.
Edit
Home
News
Sports
Culture
Opinion
Multimedia
Eat & Drink
Guides
Housing
Advertise
About
Donate
Store
1 of 3 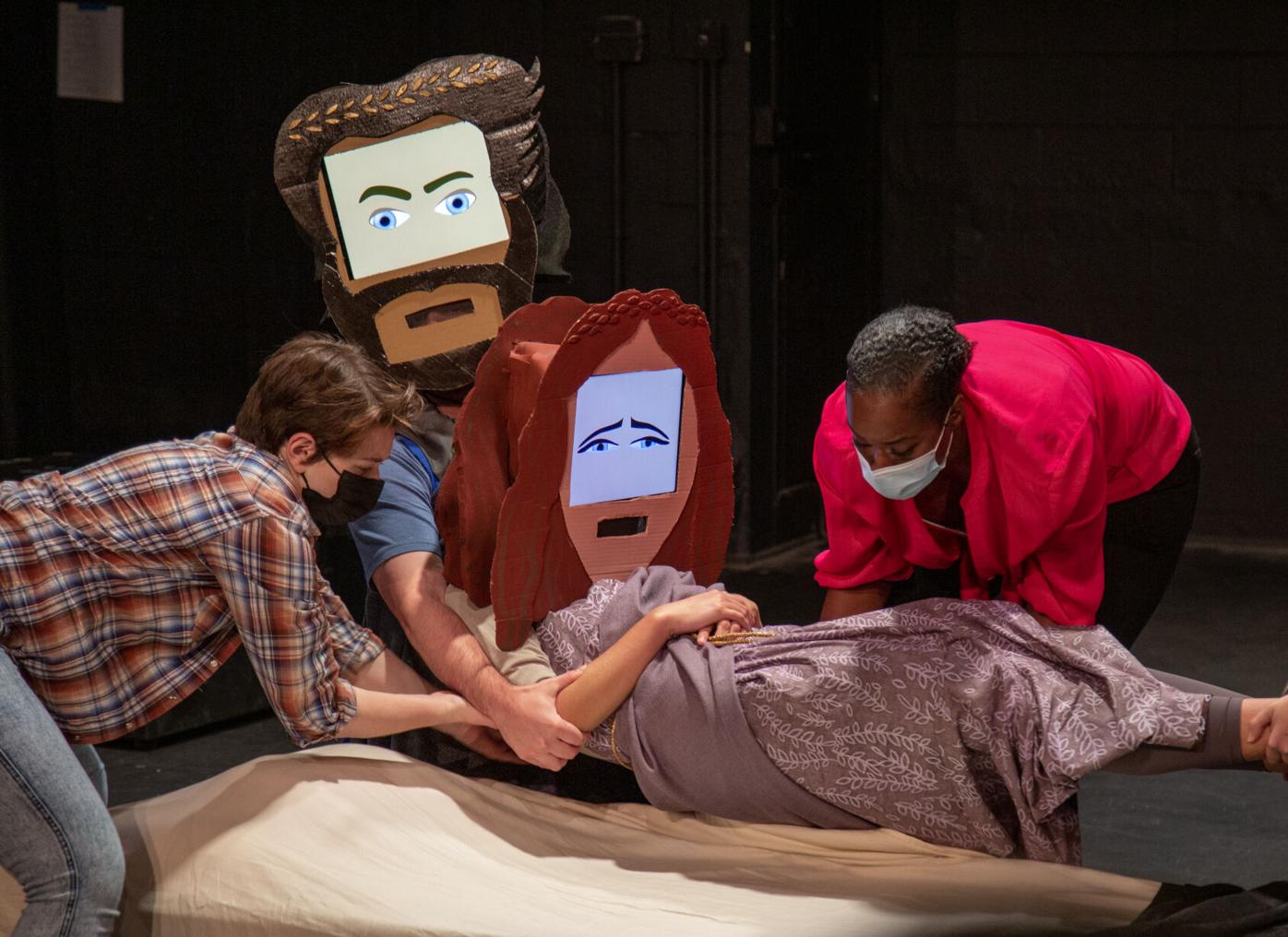 Alcestis is carried away. On Oct. 8, 2021, UGA Theatre performed Alcestis at the Cellar Theatre in Athens, Georgia. (Photo/Sidney Chansamone, @sid.chansa) 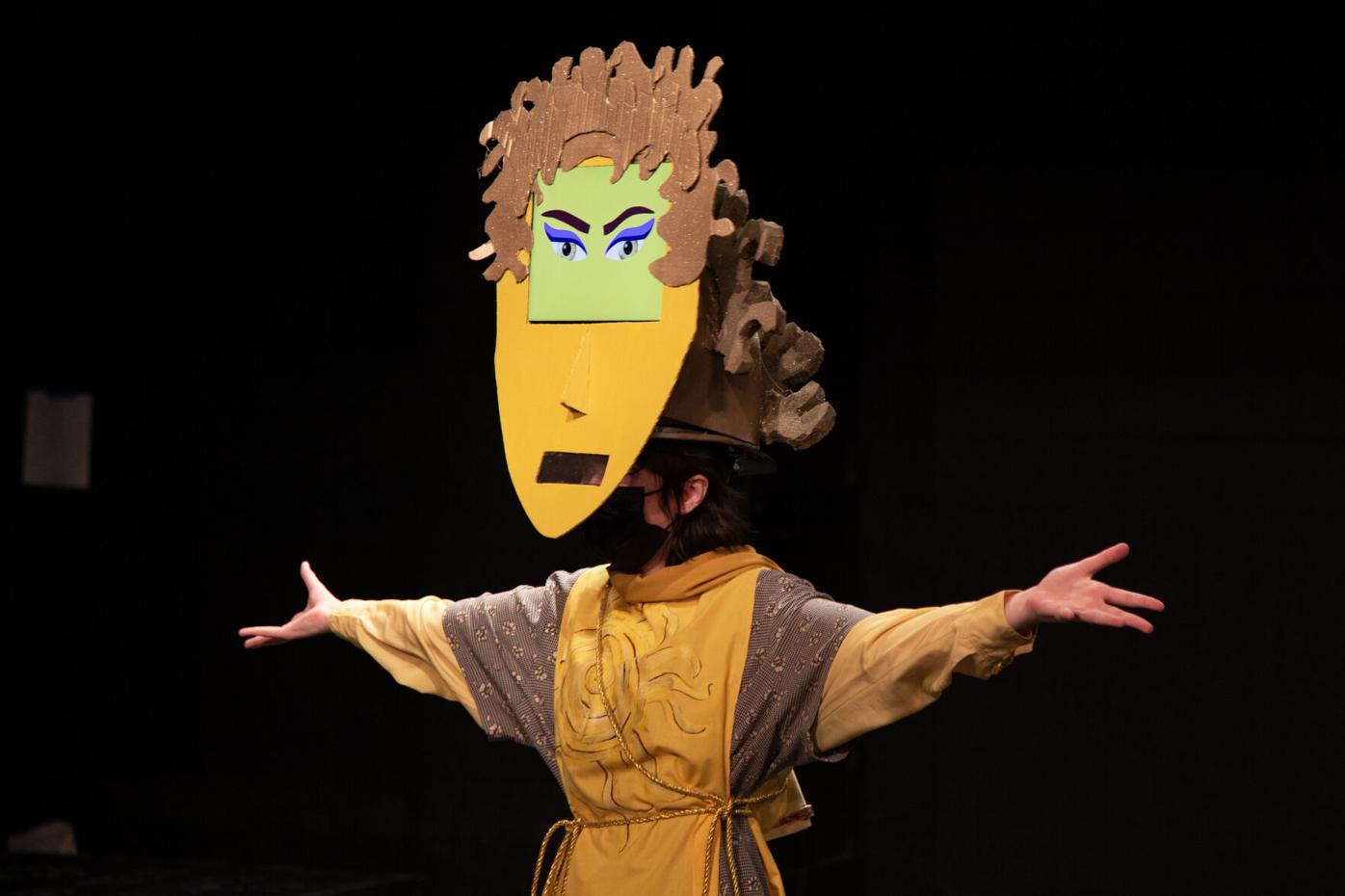 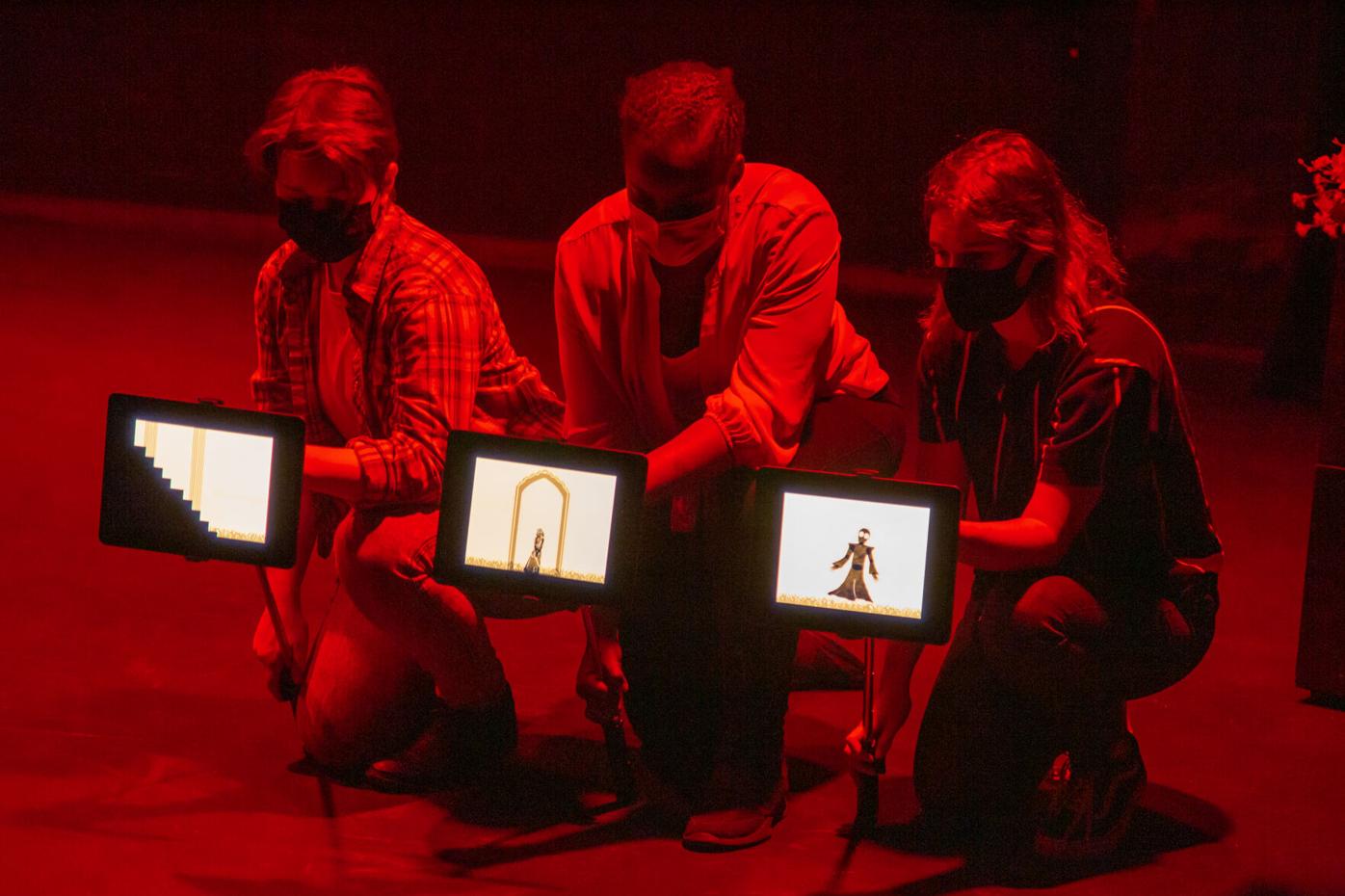 On Friday night, the University of Georgia Theatre welcomed attendants into its Cellar Theatre for a night of laughs, advanced animation and satirical yet modern humor.

Directed by the theatre and film studies department head David Saltz, the production retells the classic story “Alcestis” by the ancient Greek playwright Euripedes, but brought in modern slang and a uniquely feminist perspective to the traditionally patriarchal play.

In the original play, Alcestis only had one scene, so the writers — UGA graduate students Taryn Spires, Gabrielle Sinclair and Jeannie Thomas — remedied that by creating “gap scenes” to cultivate and develop the title character, according to an article posted on the Department of Theatre and Film Studies website.

“We had a really good base material, but we really wanted to put a strong feminist message into the original piece because the show itself was not feminist at all,” Spires said. “So it was very important to give the character of Alcestis a much larger, not only part in the show, but a larger voice.”

Although the play was set to take place in the Zell B. Miller Learning Center Amphitheater, the Thursday and Friday night shows were moved inside due to inclement weather. It wasn’t quite how the cast and crew imagined it, but the small size of The Cellar Theatre brought an unexpected intimacy to the show.

The play started with cast members cheerfully striding in wearing face masks and sitting with the audience, which fostered a fun, interactive audience. They provided expository information for some background. The cunning work of the god Apollo allowed for the King Admetus to live past the time of his death, but at the price of someone taking his place in death. This price would be paid by the king’s wife, Alcestis.

The god Apollo is the first character to take the stage — and his appearance likely surprised audience members. The actor was dressed in a yellow, golden costume but more distractingly, a large and decorative mask with an iPad in place for its eyes. Each on-stage character would wear one of these masks, with the animated eyes being the only visible facial feature.

“The idea of the masks came at the very, very, very beginning before even the writers came on board,” Saltz said. “The idea was to to contrast the larger than life characters with the totally human actors.”

Saltz also said that he liked the idea of animation and making the characters feel like “living cartoons” in addition to the human aspect.

The feminist-driven narrative comes through when the maidservant takes the stage, speaking upsettingly about her queen’s closeness to death and how unfortunate it is that she must die for a man, saying, “Aren’t all woman caught in the patriarchy?”

This contrasts directly with the original play, where the maidservant said, “Who will deny it? Is there a higher excellence than this, that a wife should die her husband’s death?”

After Alcestis dies, Heracles enters bringing with him much needed comedic relief. Upon his entrance, chorus members acted as adoring fans, asking him for his autograph and complimenting him profusely.

“My favorite person probably was Heracles. I just felt like the comedy flowed so naturally through that actor,” Kara Martin, a freshman who attended the show, said.

Throughout the production, Admetus becomes more and more unlikable — a devolution from his establishment as a noble man at the start of the play. It is implied that he had an affair with Apollo and he allowed Heracles to exhibit foolish and drunken antics in the castle, despite the fact that his wife had died only a few hours before.

The show brought in further technological animation with Alcestis’s trip to the Underworld with the God of Death, Thanatos. The story was told through an animation sequence designed by Spires on three different iPads, with chorus members changing positions as the animated stairs continued down to the depths of the Underworld. Voiceovers from Alcestis and Thanatos brought the scene to life.

At the end of the play, upon some trickery by Heracles and Alcestis, it is revealed that Admetus would not fulfill the dying promise he had made to Alcestis — that he would not take another woman in his marriage bed.

The chorus sides with Alcestis, with one even exclaiming, “You deserve so much better than him!”

Alcestis takes her mask off, revealing the human underneath. Chorus members take the stage to bow to her, and eventually together they run Admetus off the stage.

“I had originally envisioned it as a kind of celebration of the end of COVID,” Saltz said. “I wanted to end with Alcestis taking off her mask … I thought it would have this celebratory feeling.”

“Alcestis” will continue to run with dates from Oct. 12-Oct. 17, at the MLC Amphitheatre as originally planned. Tickets are $12 for students and $16 for adults.

The 30th annual Noche Latina hosted by the University of Georgia’s Hispanic Student Association was a welcomed return to normalcy in Tate Center Grand Hall.

The Grammy nominated singer-songwriter Ingrid Andress visited Athens for the first time as a part of the Feeling Things tour.

In another Heritage Walk hosted by Historic Athens, a UGA senior led a tour on LGBTQ+ history in Athens on Sunday.

Improv Athens, a comedy improv troupe at the University of Georgia, hosts free and interactive improv comedy shows every Friday at 7:30 p.m. at the Zell B. Miller Learning Center.

In the University of Georgia Fine Arts Theater, there is something in the air — people move throughout the theater buzzing with excitement as they prepare for their take on “RENT,” which is set to open tonight.

Christmas lights, industrial structures and the faint noise of a soprano opera voice set the exposition for the opening night of “Rent”— the University of Georgia Theatre & Film Studies program’s current musical production.

‘Roaring back to life’: Live theater returns to Athens, UGA after pandemic uncertainty

Now that businesses have been cleared to reopen in Athens and restrictions have loosened, live theater is finding its way back into the limelight.

Nimra Ahmad joined The Red & Black in October 2020, where she started as a contributor and now serves as the culture editor. She double majors in journalism and international affairs at the University of Georgia.