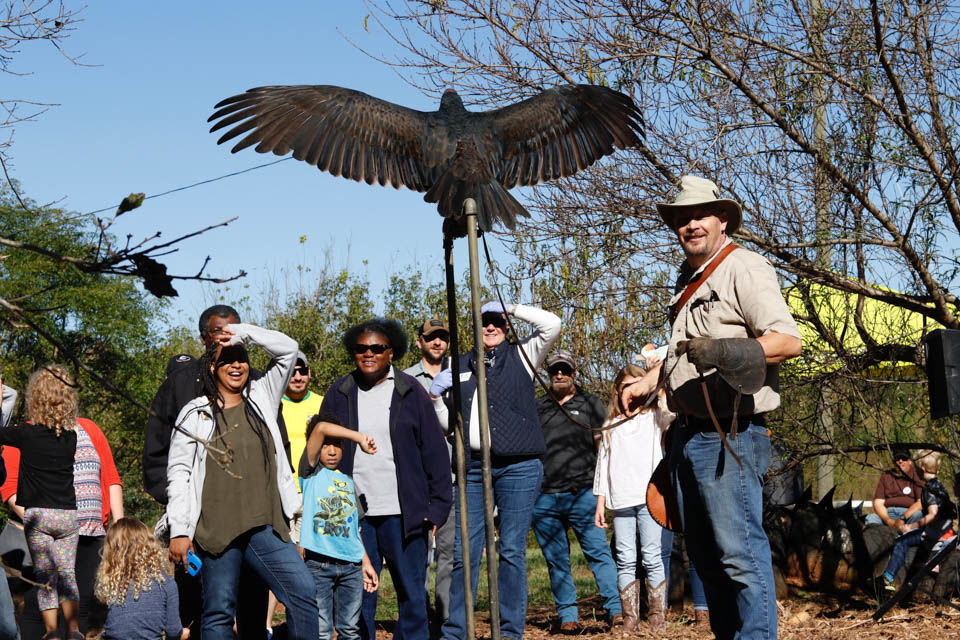 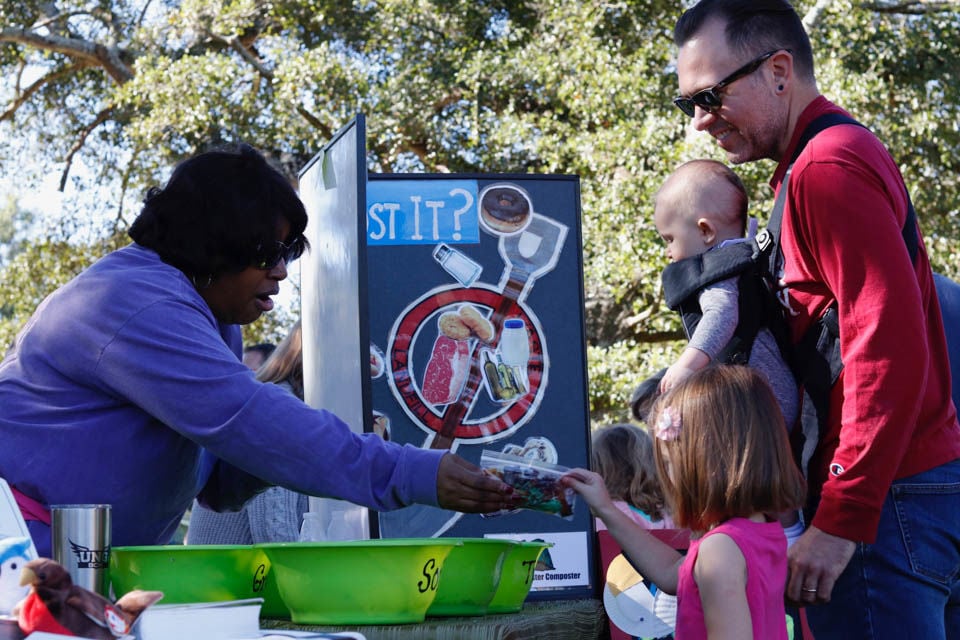 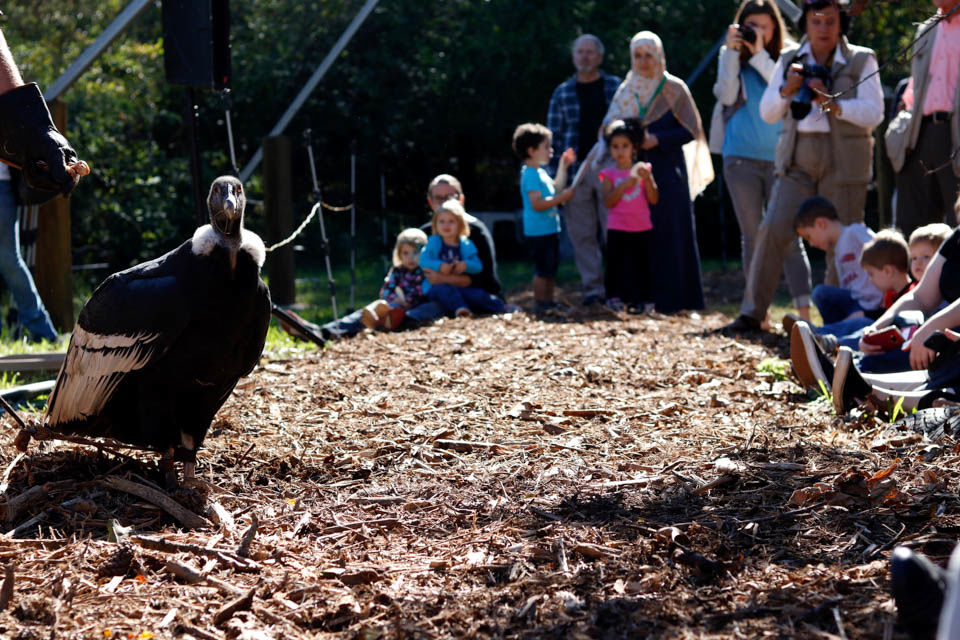 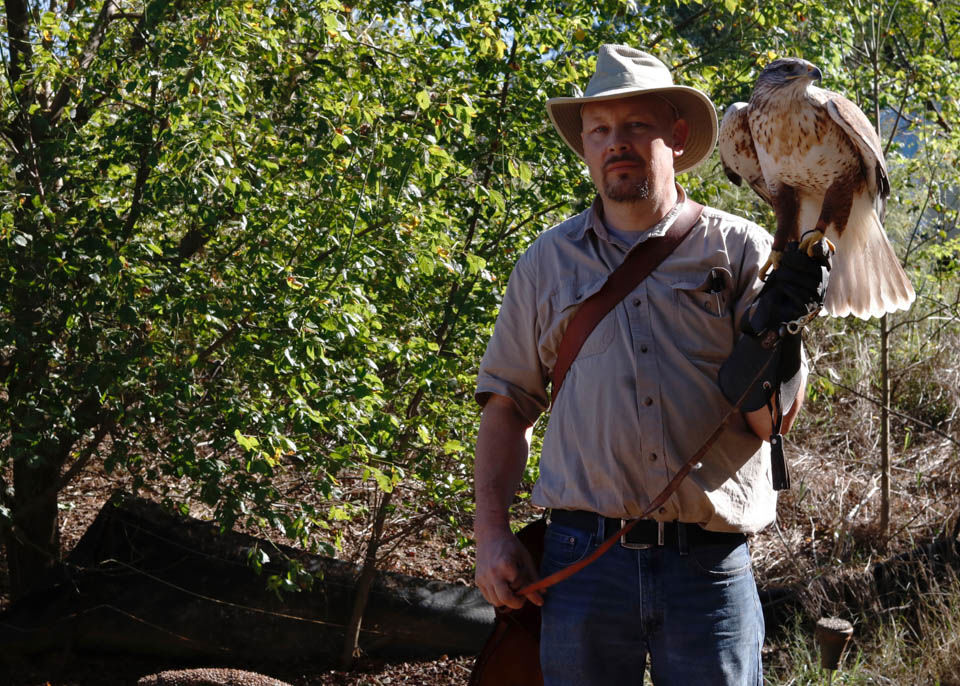 Don McCullough, a 50-year-old handler at Earth Quest, shows off a hawk during the bird show at the Vulture Festival on Saturday, October 13, 2018 in Athens, Georgia. The Vulture Festival focuses on vultures, but teaches kids about other animals as well. (Photo/Sidhartha C. Wakade, wakade98@gmail.com)

The Athens-Clarke County Recycling Division hosted the fifth annual Vulture Festival on Oct. 13 at the county landfill to celebrate and share information about nature’s undervalued recycler — the vulture. The festival drew in locals using interactive activities and presentations as well as vulture ambassadors from Earth Quest, a nonprofit environmental education organization.

While ACC Solid Waste Department Recycling Division hosted and facilitated the event, local organizations such as Oconee Rivers Audubon Society, Bear Hollow Zoo, the University of Georgia Botanical Gardens and the UGA Extension Office had booths at the event.

Each organization offered messages about the importance of recycling and composting, while explaining the important roles animals and humans have in the processes.

“One of the things we wanted to show here is the misconception of landfills and composting … We wanted to show the positive things that we do here … symbolically with the vulture,” said Mason Towe, the Program Education Specialist for the ACC Recycling Division.

Despite the event’s title, vultures weren’t the only composting creatures at the festival.

“I think [Bear Hollow Zoo has] some possums and hissing cockroaches and other animals,” Towe said. “They’re also like nature’s recyclers or nature’s clean-up crew.”

Jen Benoit, the program specialist at Bear Hollow, explained how these creatures fit into the festival.

“We brought some animals that have some common misconceptions about them, kind of like vultures do,” Benoit said.“We brought them out so we can help educate the community and educate kids about their importance in the ecosystem.”

One purpose of the Vulture Festival is to provide a new narrative for the underappreciated creatures, drawing parallels between the less-than-popular reputation of landfills and vultures.

“[Vultures] are always the villain in the Disney movie, but really, they’re providing a vital service. So it’s kind of symbolic and educational in both ways,” Towe said.

Education seems to be the best way to promote positive opinions of vultures and other recycling creatures. The ACC landfill doubled as an outdoor classroom by offering general recycling information as well as vulture-specific stations lead by volunteers.

Lauren Head, a junior wildlife science major from Milton, came to the event as a volunteer and ambassador for the Warnell School of Forestry and Natural Resources at the University of Georgia.

“[Vultures are] really, really important [in] the natural cycle of breaking down food,” Head said.. “They can digest pretty much anything and not get sick from it. When they eat prey …  they also keep diseases from being spread to things that might actually really get sick.”

The station where Head was volunteering offered interactive lessons about a variety of topics, including how how vultures’ stomach acid breaks down difficult foods. There were also opportunities to learn more about vultures native to Georgia.

The six-foot wingspan of the condor at the event was hard to ignore, especially as it flapped its giant wings just inches from the faces of the closest spectators.

“We get quite a range of folks coming out and enjoying our event,” Towe said. “Families, people who are interested in birds, just your typical Athens festival crowd. Also, people that are interested in what we’re doing here in Athens in our program.”

BEST OF: Georgia vs. LSU in Baton Rouge

The University of Georgia football team suffered their first loss of the season,  36-16, against Louisiana State University on Saturday, Oct. …

Review: ‘Mega Man 11’ fails to live up to full potential

In the famous gaming mascot’s latest entry, Mega Man returns with an adventure that pushes p…

The Jewish Film Festival is the longest-running film festival in Athens, taking place for 11…

With the faith of a pumpkin seed: Baptist Church pumpkin patch gives back

WUGA, StoryCorps partner to tell the stories of Athens through 100 conversations between residents

People hold conversations every day, be it brief small talk or longer discussions, but the o…

On the blue-gray walls of the Georgia Museum of Art, the haunting portraits shot by American…

From 5K races to marches, walking for a cause is a concept utilized by many groups to suppor…

When music meets politics, public discourse is inevitable. On Oct. 15, musician Jim James in partnership with HeadCount will bring “The Future…

Everyone knows the story — Neil Armstrong was the first man on the moon. However, the details of the Apollo 11 mission and the events leading …

Whether it’s told orally or textually, a story manifests an alternate reality possible only through imagination. On Oct. 16, Rabbit Box Storyt…

While Athens may be home of the Georgia Bulldogs, a different kind of bark rang through the streets of the Classic City on the afternoon of Su…

The past five years have been particularly spooky in terms of horror films. After a decade dominated by gore flicks and predictable jumpscares…

Q&A: Despite never wanting to be a singer, Jordan Davis puts out debut album ‘Home State’

A fall Saturday in Athens without a UGA game is rare, so the Lyndon House Arts Center will take the opportunity to celebrate a combination of …

As an animal sanctuary, Sweet Olive Farm in Winterville typically gets rescues, not newborn animals. However, this changed on Oct. 5 and 7. Tw…

Animals and Akademia: Brewery hosts night of beers and bones

Upbeat music and the smell of savory bar food filled the space between Akademia Brewing Company’s mural-filled walls on Monday, Nov. 18. While…