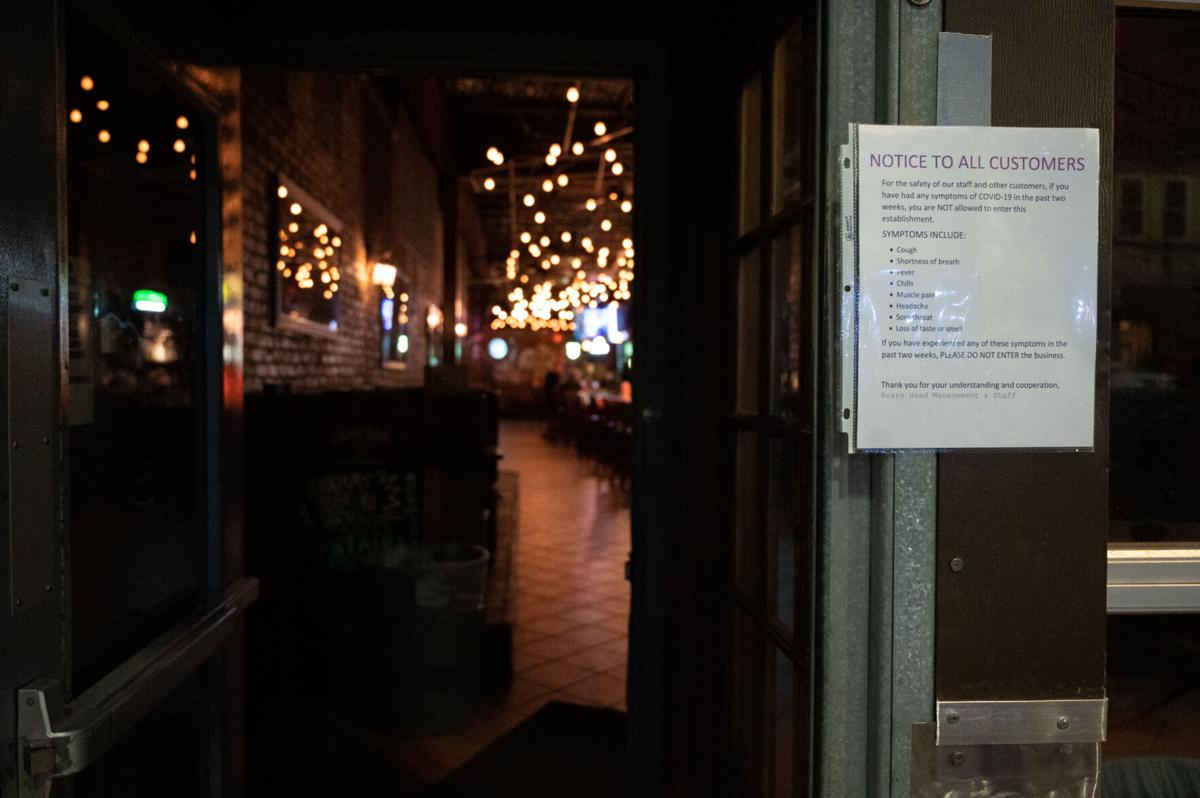 Bars in Athens, Georgia, opened back up on Monday, June 1, 2020. Many bars and restaurants in Athens have been closed for the past two months due to COVID-19. However with Governor Kemp permitting bars to reopen at 35% capacity, Allgood Lounge has chosen to open its doors with a posted safety notice warning customers of the precautions they should take. (Photo/Sophie Yaeger) 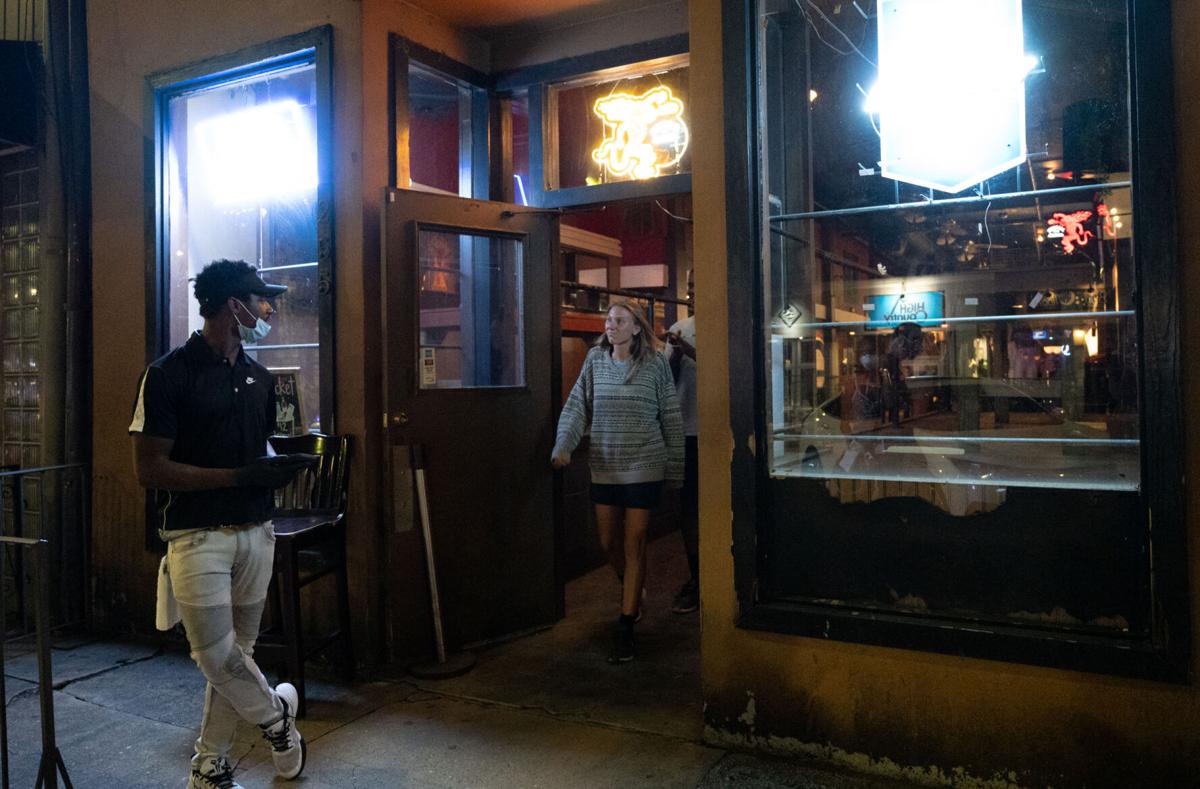 Bars in Athens, Georgia, open back up on Monday, June 1, 2020. Many bars and restaurants in Athens have been closed for the past two months due to COVID-19. However, with Gov. Brian Kemp permitting bars to reopen at 35% capacity, On The Rocks has chosen to open their doors. (Photo/Sophie Yaeger)

After being open for a month, Athens bars are caught between a rock and a hard place, with the risk of workers contracting COVID-19 balanced with the challenge of keeping businesses and employees afloat after being previously closed for months.

Mitch Jordan owns three downtown bars — On The Rocks, Moonshine and 1785 Bar and Grill. In a normal summer, about half of his approximately 180 employees are not working due to them leaving town. Of those who are in town this summer, fewer than 10 have tested positive for COVID-19.

Jordan and his management staff have been sending home employees who exhibited symptoms, although some ended up testing negative or having the flu or other ailments.

As a business owner, Jordan said he and his staff have been extra cautious due to the general anxiety around COVID-19 and the precarious financial situation of Athens businesses.

Bars in Georgia reopened on June 1 with various restrictions. Between May 31 and June 21 (the last 14-day period for which confirmed case data is available), cumulative cases in the state increased by about 47%. In Athens-Clarke County, the increase was larger — 55%.

In the past week, states such as Texas and Florida have reevaluated their reopening plans due to skyrocketing case numbers. In Florida, a group of 16 friends tested positive for COVID-19 after going out to a bar.

Both states have reclosed bars, but some bar owners in the states are disgruntled. One owner is suing the state of Texas over the reclosure.

“You see people coming in and just throw it [alcohol] down like it’s their last day on earth, and then they do it the next day and the next day,” said Jeremiah Williams, a doorman at The Max Canada.

In Georgia, 1,400 health care workers submitted a letter to Gov. Brian Kemp, asking him to implement changes to help slow the rise in cases, including a mask mandate and reclosing bars and nightclubs. A face covering ordinance was passed as an emergency ordinance at the Athens Mayor and Commission meeting on July 7.

Some bars, such as Buddha Bar, Centro and Sandbar, closed their doors from June 24 to July 6 to “help slow the spread” of the virus in Athens, according to their respective social media accounts.

Anthony Fauci, the director of the National Institute of Allergy and Infectious Diseases, has said that congregating at bars is “bad news,” and needs to be stopped.

“You can only do so much and have like a bunch of drunk people in a bar,” said Cat Domingo, a bartender at Allgood. “Of course no one is going to social distance, of course everyone’s just all over each other and it’s kind of annoying because you’re just sitting there like ‘I’m here because I have to be here. Do you really have to be here?’”

Domingo said that there is no way to enforce social distancing among patrons in a bar, especially when they are drunk. Williams said he has seen maybe only one person with a mask downtown.

As far as action from the local government, the ACC Mayor and Commission and the Athens Downtown Development Authority are continuing to work out a way to create more outdoor seating using parking spaces, according to Mayor Kelly Girtz. Outdoor seating allows for more ventilation and reduces the chance of the virus spreading.

Girtz referenced the mask requirement when asked if there is anything else the ACC government could do. The ordinance will go into effect on July 9. People not wearing masks will be fined $25 for a first offense and every subsequent offense will have an increased fine of $25 more.

A pilot project has been created to shut down College Square to cars and create space for outdoor seating, but the plan to potentially rent out parking spots is still in the early stages, said Linda Ford, the director business services for ADDA. For now, downtown businesses have to rely on their current outdoor seating, though this is not an option for many of the bars.

“I get that everyone wants to go [out] but it just kind of sucks for everybody that needs to work,” Domingo said. “‘We need you to be unsafe to make us be able to live.’ It’s really a weaselly situation at that point.”

Clarification: This article has been updated to more accurately reflect the summer staffing at Mitch Jordan's bars.

GUEST COLUMN: The Georgia Department of Labor is failing to serve the unemployed

The COVID-19 pandemic is forcing many Georgians to apply for unemployment benefits, but the Georgia Department of Labor has been too unresponsive.

Bars and restaurants in Athens are facing increased difficulties and restrictions due to the coronavirus. Supporting local businesses by wearing masks and social distancing helps everyone in the community.