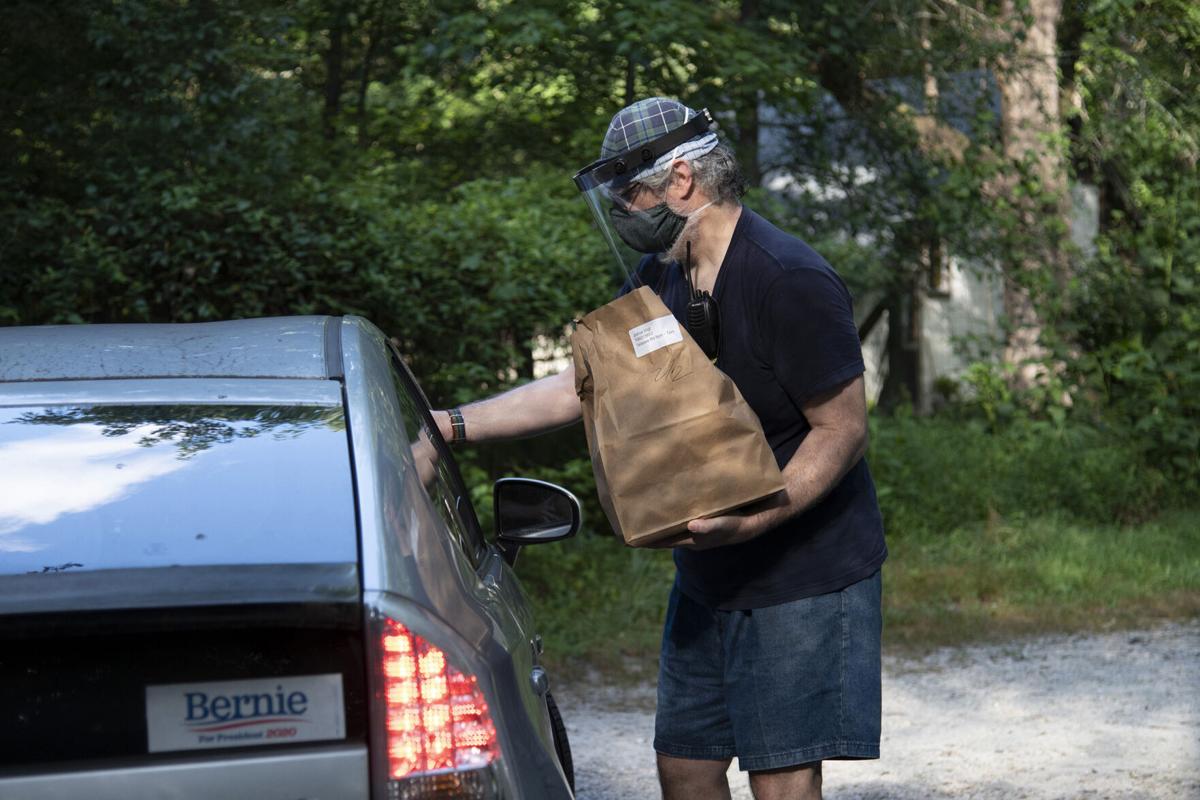 Eric Wagoner, one of the founding members of Athens Locally Grown in 2001, distributes food to a customer during the market pickup July 23, 2020. Since the pandemic, the sales of the market have increased. (Photo/Olyn Gee) 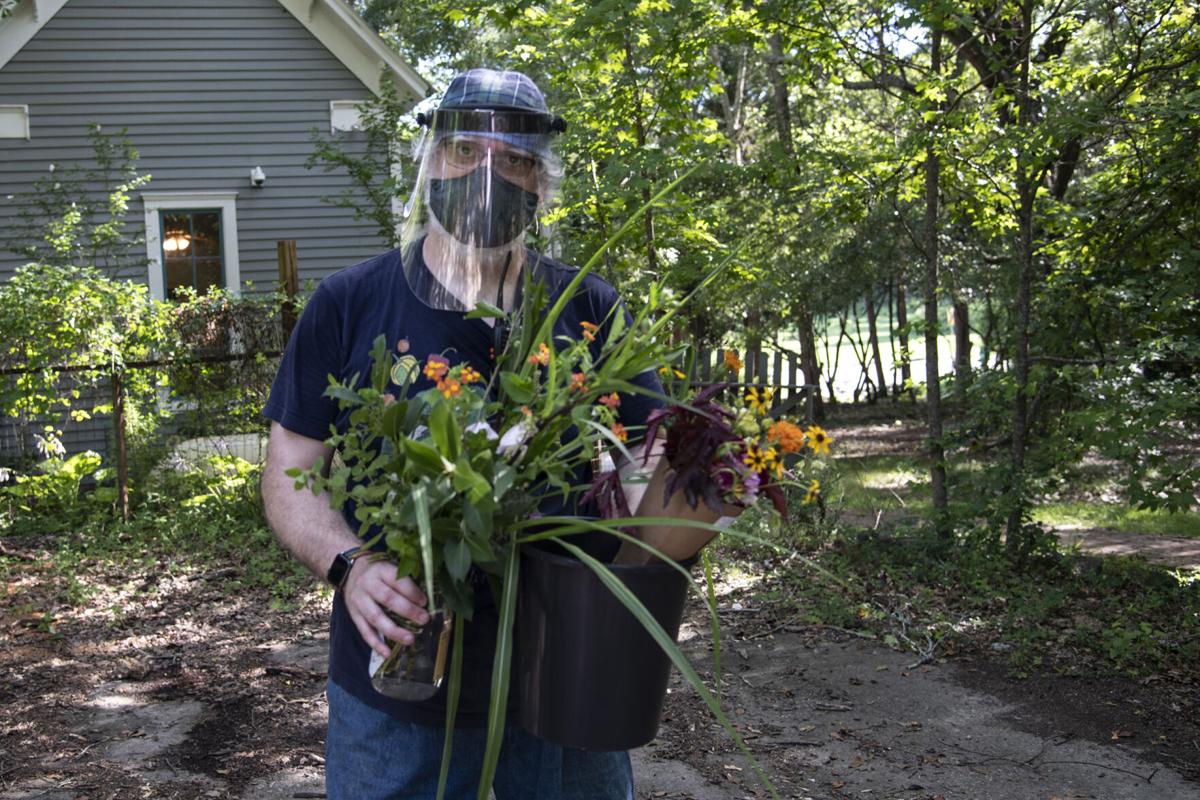 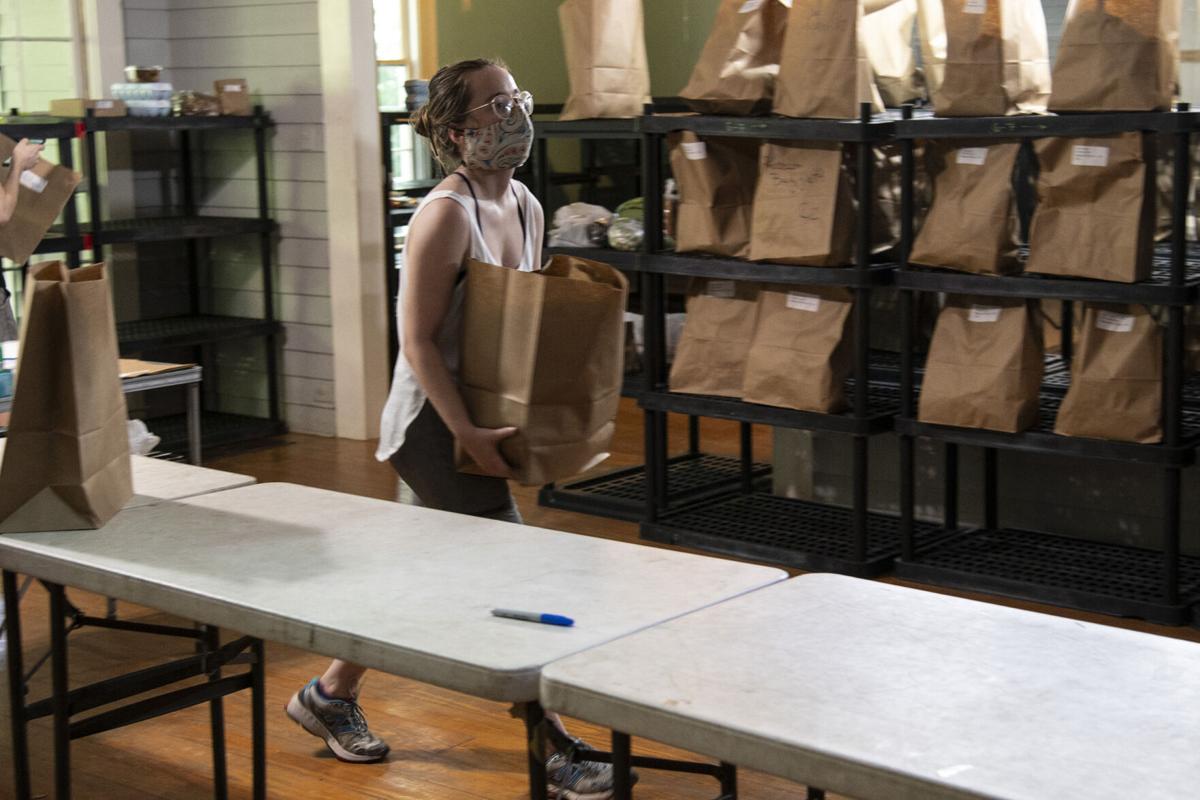 July 23, 2020, Maggie Songster, a volunteer at Athens Locally Grown, sorts purchases prior to pickup. The farmers market’s orders have increased during the COVID-19 pandemic. (Photo/Olyn Gee)

Customers in cars lined up on a sand and gravel road at the Athens Locally Grown farmers market July 23. They waited to pick up orders that had been placed earlier in the week and organized by market volunteers.

About the time each car reached the pick-up tent, market manager Eric Wagoner appeared with the order. Wearing a face shield, he placed the order in the customer’s back seat or trunk.

The process was fast-paced and ran smoothly. A first-time visitor might not suspect that the pandemic had caused turmoil for the market over the last four months. COVID-19 affected the market in “every possible way,” Wagoner said.

The volunteers, who are customers of the market, assemble the orders and receive a modest credit toward market purchases, Wagoner said. Each year, customers pay a $20 membership fee.

Not all growers participate each week because of the produce they raise, Wagoner said. “For instance, a blueberry vendor might sell three or four weeks out of the year, and that’s the only time we see them,” he said.

About 100 growers are active in the market and approximately 50 list items for sale each week, Wagoner said. “The table fee for growers is 10%. That all goes back to the market in the form of volunteer credits and a refund ‘make it right’ fund,” he said.

When COVID-19 hit, customers feared going to the grocery store, and the disruption of the supply chain caused shortages, Wagoner said. Because of the online-ordering system, “it was easier for us to adapt than for more traditional markets,” he said.

“We went contactless when COVID-19 hit,” Wagoner said. “Before that we had a pickup table and a cashier, both with plenty of human interaction.”

The first priority was changing order pickup to be safe, with social distancing, protective gear and the ability to wash hands, Wagoner said.

While other farmers markets scrambled to adapt, Athens Locally Grown was open, and within two weeks its “sales climbed 10 times normal,” Wagoner said.

"I remember breathing a sigh of relief after the first week's attempt, realizing we could make it work and keep the market running."

Mary Songster has volunteered for over a decade at the Athens Locally Grown market. After COVID-19 hit, the old market location was overwhelmed, Songster said. The market closed down for two weeks until it found a temporary location at the YMCA, on Hawthorne Avenue, she said.

The number of customer orders increased from the normal of 75-100 per week to about 200, Wagoner said. In addition, the average dollar total per order increased.

After the initial rush, weekly sales for the market stabilized at about eight times its normal volume, Wagoner said.

“I have been championing the benefits of an online market for a long time,” Wagoner said. The nature of online ordering gives growers the ability to harvest only the amount of produce that has been pre-sold, he said.

When the YMCA reopened, Wagoner once again searched for a new location, he said. Now, the market pickup is located at 580 Tallassee Road on the West Side of Athens.

Wagoner licenses his online-ordering software to hundreds of farmers markets in the U.S., charging about 3%, sometimes less, of each market’s sales to cover the costs of the computer system. The system was used to help West Broad Farmers Market make its shift to online ordering this year, also.

Although the market is not a registered nonprofit, Wagoner runs it as one, he said. Now, he works a 9-5 job as a software developer and serves as the market manager with no salary, Wagoner said.

“I don’t have the farm anymore, but I love Athens, and it’s important to me to have easy access to locally grown food,” Wagoner said. “ALG is the best way to make sure that’s true, so I keep it going.”

Anne Holmes, a long-time customer and former volunteer, spoke about Wagoner’s service. “It's all about how conscientious Eric is. He's not only interested in his market but also all local markets,” she said.

Because Athens Locally Grown is a Thursday market, it always closes the week of Thanksgiving, Wagoner said. He opens it the other 51 weeks each year — except years when another holiday, like Christmas, falls on a Thursday, he said.

Or a pandemic disrupts the world.

The Athens Locally Grown market takes online orders all day Monday and Tuesday until 8 p.m. Pickup is at 580 Tallassee Road each Thursday, from 5-8 p.m. (across the street from the Waseca Learning Environment and the Greater Athens Church of God).